Louisiana Supreme Court Justice Jefferson Hughes III has filed a defamation lawsuit against The Advocate’s parent company, alleging that the newspaper knowingly published false and damaging information last year about his actions in a decades-old child abuse and custody case that led to a lengthy FBI investigation.

Hughes filed his lawsuit last month in Iberville Parish, which falls within his Supreme Court district. Hughes, who lives in Livingston Parish, alleges that some of his damages occurred in Iberville Parish. The Advocate is based in East Baton Rouge Parish. The lawsuit alleges that the newspaper falsely published that Hughes had ruled in favor of the mother in the custody case while he was embroiled in a romance with her lawyer. 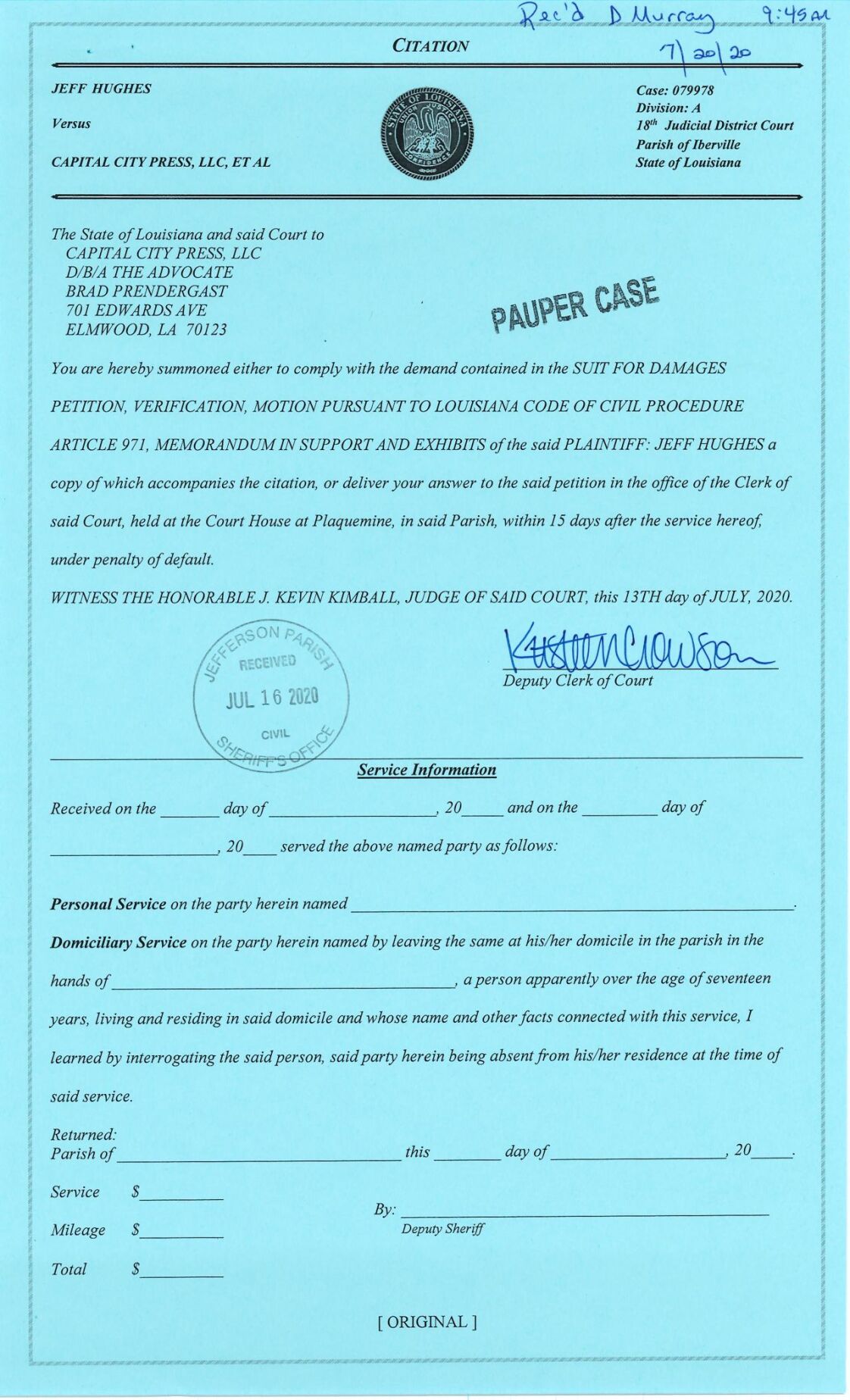 The case involved a 5-year-old boy who was allegedly abused at the hands of his stepfather. Hughes placed the boy with the mother — who was once represented in the case by Hughes’ alleged girlfriend — over objections from state child welfare authorities about the mother’s new husband and the criminal charges he still faced.

Hughes’ lawsuit takes issue with the wording of an editorial that ran in the newspaper on June 25, criticizing him for his behavior in the case. That editorial ran days after a story that noted the attorney, Berkley Durbin, had removed herself officially from the custody case in August 1998, seven months before Hughes issued his ultimate ruling in the mother’s favor.

“But Durbin never strayed far — before, during or after Hughes’ custody decision and his campaign to enforce it,” the story reads, describing Durbin’s involvement in the related criminal case over accusations that the 5-year-old boy’s stepfather intentionally burned him in scalding bathwater. Durbin represented the stepfather in the criminal after she withdrew from the custody case.

After Hughes awarded the boy to the mother, and then jailed the boy’s grandmother for helping to spirit him away to Mississippi, an appeals court stripped him of oversight of the custody case. A federal civil rights investigation got underway, led by former U.S. Attorney L.J. Hymel of the Middle District of Louisiana, records show.

That investigation would produce no charges. The outcome of a parallel probe into Hughes’ actions by the Louisiana Judiciary Commission is secret. But in 2004, after the civil rights investigation ended, Hughes penned apology letters to the grandmother in that case and two people involved in a separate case he had overseen.

The investigation of Hughes was part of a series by The Advocate last year that highlighted the secretive process for disciplining judges in Louisiana, where fewer than 1% of complaints about judicial misconduct ever reach the public realm.

The court changed its rules in the wake of the series and rumblings in the Legislature over a lack of transparency. Hughes and his Supreme Court colleagues voted this year to open up Judiciary Commission hearings to the public for the first time and to limit the use of private admonishments and cautions that never see the light of day.

The court still insists on secrecy, however, when it comes to initial complaints against judges. Until a judicial misconduct complaint reaches the hearing stage, no one is allowed to discuss it.

Scott Sternberg, the attorney who represents The Advocate, said he is both confident in the newspaper’s reporting and confident that the matter will be dismissed.

"The Advocate's reporting was the true meaning of public service journalism — the voters of Louisiana deserve to know more about their judiciary so they can make informed decisions about who they elevate to the bench, and now they do,” Sternberg said.

"For Justice Hughes to file this retaliatory lawsuit against the Advocate in a parish with no connection to his dispute represents why more transparency is necessary,” he added.

Without knowing about the investigations and apology letters related to Hughes, voters repeatedly elected him to judgeships. A Republican from Walker, Hughes ascended as a district judge in Livingston and Tangipahoa parishes to the First Circuit Court of Appeal in 2004, and to the Supreme Court in 2012. He was reelected without opposition to a 10-year term in 2018.

In his lawsuit, which names Capital City Press LLC as defendant, Hughes acknowledges meeting with editors and reporters shortly after publication. Hughes requested, and was denied, a correction on the wording of the editorial.

Hughes claims the newspaper has caused him embarrassment and damaged his reputation in the eight parishes in his judicial district, which include Iberville. Hughes wants the newspaper to run four front-page corrections.

The court filings are stamped as a “pauper case,” which generally represents that the petitioner — Hughes, in this case — has made a representation to the Court that they cannot afford to pay court fees. Supreme Court justices in Louisiana earn $170,324 annually.

The state Supreme Court, with a long history of protecting misbehaving judges instead of guarding the public, seems to finally be feeling the heat.