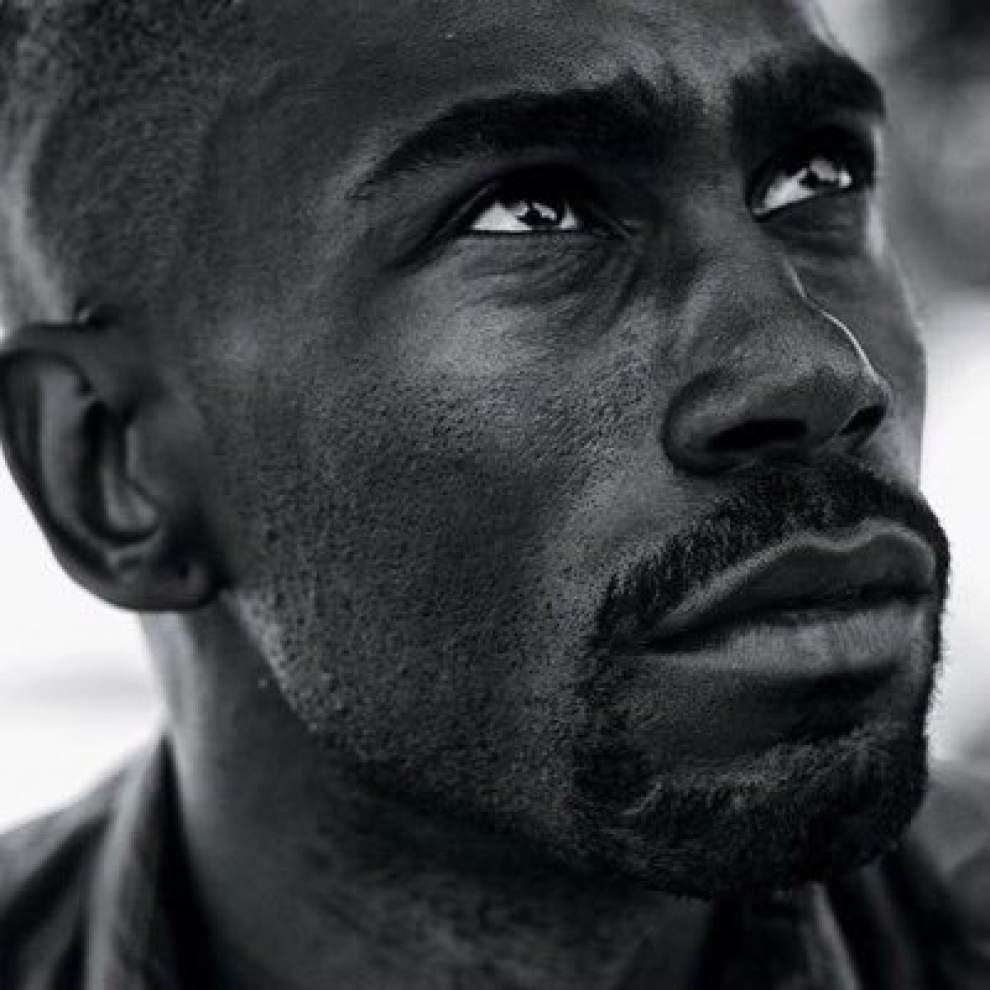 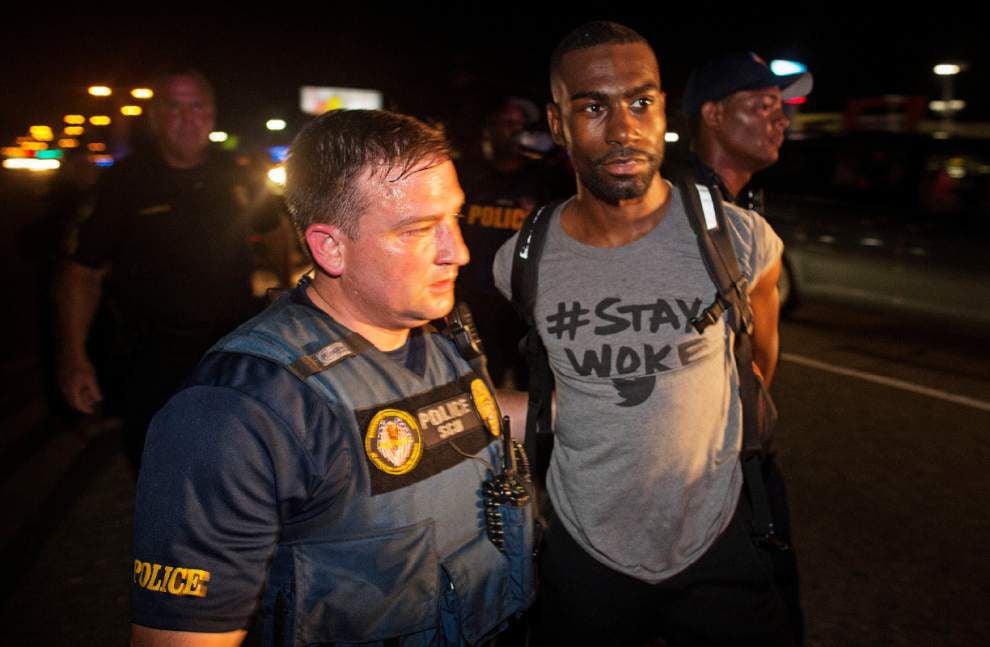 Police arrest activist DeRay McKesson during a protest along Airline Highway, a major road that passes in front of the Baton Rouge Police Department headquarters Saturday, July 9, 2016, in Baton Rouge, La. Protesters angry over the fatal shooting of Alton Sterling by two white Baton Rouge police officers rallied Saturday at the convenience store where he was shot, in front of the city's police department and at the state Capitol for another day of demonstrations. (AP Photo/Max Becherer)

A Baton Rouge policeman’s lawsuit against a prominent Black Lives Matter activist over injuries the policeman claims he suffered during 2016 protests over the death of Alton Sterling is heading back to lower courts after the U.S. Supreme Court threw out an appellate ruling that would’ve let the lawsuit go to trial.

The high court's decision (which begins on page nine here) marks a partial legal victory for civil rights activist DeRay Mckesson, who had appealed the ruling by the 5th U.S. Circuit Court of Appeals in an effort to end a three-year legal battle. Instead, justices in a 7-1 decision rejected the appeals court's decision and ordered lower courts to consult with the Louisiana Supreme Court over several issues of state law before considering the case again.

The police officer, who identifies himself in the lawsuit only as John Doe “for his protection,” sued both Mckesson and the Black Lives Matter movement for damages after being seriously injured by a chunk of concrete or similar rock-like object thrown during tumultuous protests on Airline Highway outside Baton Rouge Police headquarters in July 2016.

The officer doesn’t contend that Mckesson threw the projectile or had any direct involvement in his injuries. Instead, the policeman claims Mckesson orchestrated the protests and “knew or should have known” such violence might happen during the demonstration and should be held civilly liable.

The person who threw the object has never been identified and there is no allegation in the lawsuit that Mckesson knew the person or directed his or her actions.

Mckesson, a nationally prominent activist from Baltimore, had traveled to Baton Rouge to join the swelling demonstrations over the fatal shooting of Sterling by a BRPD officer outside a North Foster Drive convenience store earlier that week. The lawsuit claims Mckesson orchestrated the protest on July 7 at which the police officer was injured, although protests were already growing before Mckesson’s arrival in the city.

Nearly 70 protesters arrested during demonstrations following Alton Sterling's fatal shooting in July 2016 will each receive from $500 to $1,0…

U.S. District Judge Brian Jackson in Baton Rouge had previously thrown out John Doe's lawsuit, ruling that Black Lives Matter is a loose social movement, not “an entity of any sort,” and like the tea party or civil rights movement, can’t be sued. Jackson also ruled that Mckesson “solely engaged in protected speech” at the demonstration and thus couldn’t be held liable for the police officer’s injuries.

BATON ROUGE, La. (AP) — A federal judge has ruled that Black Lives Matter is a social movement that can't be sued over an officer's injuries d…

But a three-judge panel of the U.S. 5th Circuit Court of Appeal reversed Jackson in a 2-1 decision. The appeals court panel ruled that the policeman’s lawsuit against Mckesson could proceed to trial because a jury might rule that violence was a reasonably foreseeable risk of protesters blocking the roadway.

The ruling came after one of the judges, President Donald Trump appointee Don Willett, reversed himself and flipped his decision, which originally sided with Mckesson.

The full 5th Circuit deadlocked over whether to reconsider that decision in a full en banc hearing, with several judges issuing blistering criticism of the panel's decision.

While a federal appeals court has allowed a Baton Rouge police officer's lawsuit against a Black Lives Matter protester to go forward, one jud…

Mckesson took his case to the U.S. Supreme Court, arguing that his involvement in the protests is protected by the First Amendment’s free speech guarantees and that it’d be unconstitutional to hold him legally liable for the actions of others during the large protests.

His attorneys cited the landmark 1982 unanimous Supreme Court decision in NAACP v. Claiborne Hardware Co., a civil case in which a Mississippi company tried to hold the NAACP liable for damages to its business and limited instances of violence stemming from local protests and boycotts the civil rights group had organized in the 1960s. The Supreme Court in that case threw out decisions by Mississippi courts and sided with the NAACP in ruling that the group’s efforts to organize nonviolent protests were constitutionally protected.

In its unsigned ruling issued Monday, which came without arguments, the Supreme Court didn’t consider those free-speech claims. Instead, the justices wrote that the federal courts should ask the Louisiana Supreme Court to determine whether Louisiana state law even provides a legal basis to seek civil damages in a case like this.

State law, the U.S. Supreme Court noted, doesn’t normally impose a “duty to protect others from criminal activity of third persons.” But the Supreme Court suggested it’s unclear from past state court rulings whether a protest organizer could theoretically be held liable for an attack because — in the words of the 5th Circuit panel — “a violent confrontation with a police officer was a foreseeable effect of negligently directing a protest” into the roadway.

If state law does not allow the injured police officer to seek monetary damages from Mckesson, then the deeper question of whether the First Amendment nonetheless protects Mckesson’s actions is a moot point. Guidance from the state Supreme Court, the U.S. Supreme Court ruled, would provide clarity on that question before the federal courts delve into the thornier issues of constitutional law.

Justice Clarence Thomas dissented from Monday’s Supreme Court ruling but did not release a written opinion explaining his reasons. Justice Amy Coney Barrett, who was confirmed to the Supreme Court just last week, did not participate in the decision.

Mckesson said he was pleased with the small victory, for now.

"Today’s decision recognizes that holding me liable for organizing a protest because an unidentifiable person threw a rock raises First Amendment concerns," Mckesson said in a statement. "I’m gratified that the Supreme Court vacated the ruling below, but amazingly, the fight is not over."

Mckesson added in a tweet that he considered the decision a "win for every organizer & activist."

The American Civil Liberties Union, which supported Mckesson's appeal to the Supreme Court, contended that the 5th Circuit ruling would have dismantled key civil rights-era decisions defending the rights of protesters and activists.

"This officer's outrageous lawsuit against DeRay Mckesson is a threat to every American's right to protest," said Alanah Odoms, executive director of the ACLU of Louisiana. "The lower court's decision would have eviscerated important First Amendment protections and we're relieved it's been overturned."

I've been in this legal battle since Nov 2016 and the Supreme Court vacated the 5th Circuit decision against me that said that individual organizers can be civilly liable for injuries/damages. This is win for every organizer & activist. Let's keep fighting. https://t.co/CPL6pWzusg

Donna Grodner, the attorney representing the unnamed Baton Rouge police officer, contended instead that the Supreme Court's ruling on Monday was simply an effort to clear up any possible uncertainty around the law — and argued that it contained a positive signal for her side of the lawsuit.

"The decision signifies the Fifth Circuit got it right," Grodner said in an email.

Josh Blackman, a law professor at South Texas College of Law in Houston and an adjunct scholar at the conservative libertarian Cato Institute, said he thought the justices on Monday "punted" by kicking the case over to the state Supreme Court.

"There were not enough votes to grant review. And there weren't enough votes to reverse the 5th Circuit. So the court kicked the can down the road, hoping that Louisiana Supreme would resolve the case," Blackman said. "One of the purposes of a punt is to kill time. This certification may take another year or two off the clock. Who knows where the court will be at that time."

For Mckesson and his supporters, Blackman added, "a punt is better than" the Supreme Court letting the 5th Circuit ruling stand.