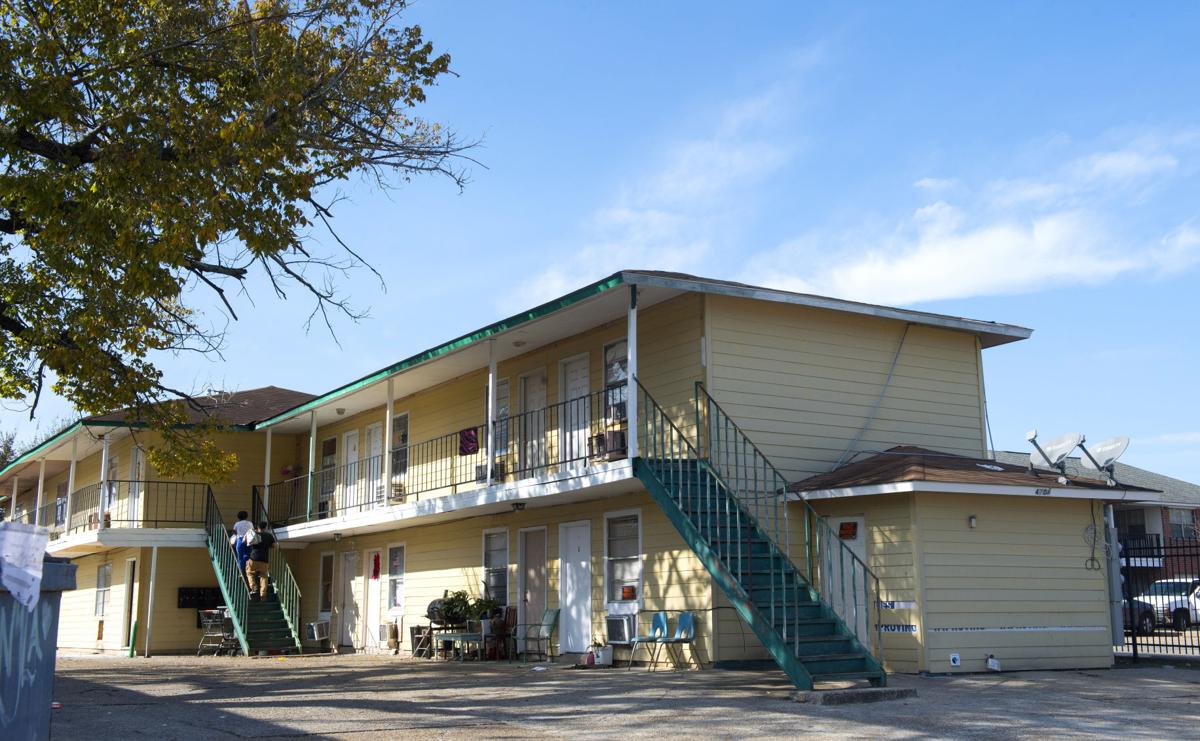 A double homicide at this small apartment complex in the 4700 block of Tigerland area in mid-October of this year is one of the recent incidents that reflect the changing face of the the Tigerland area, seen Wednesday, Nov. 20, 2019. 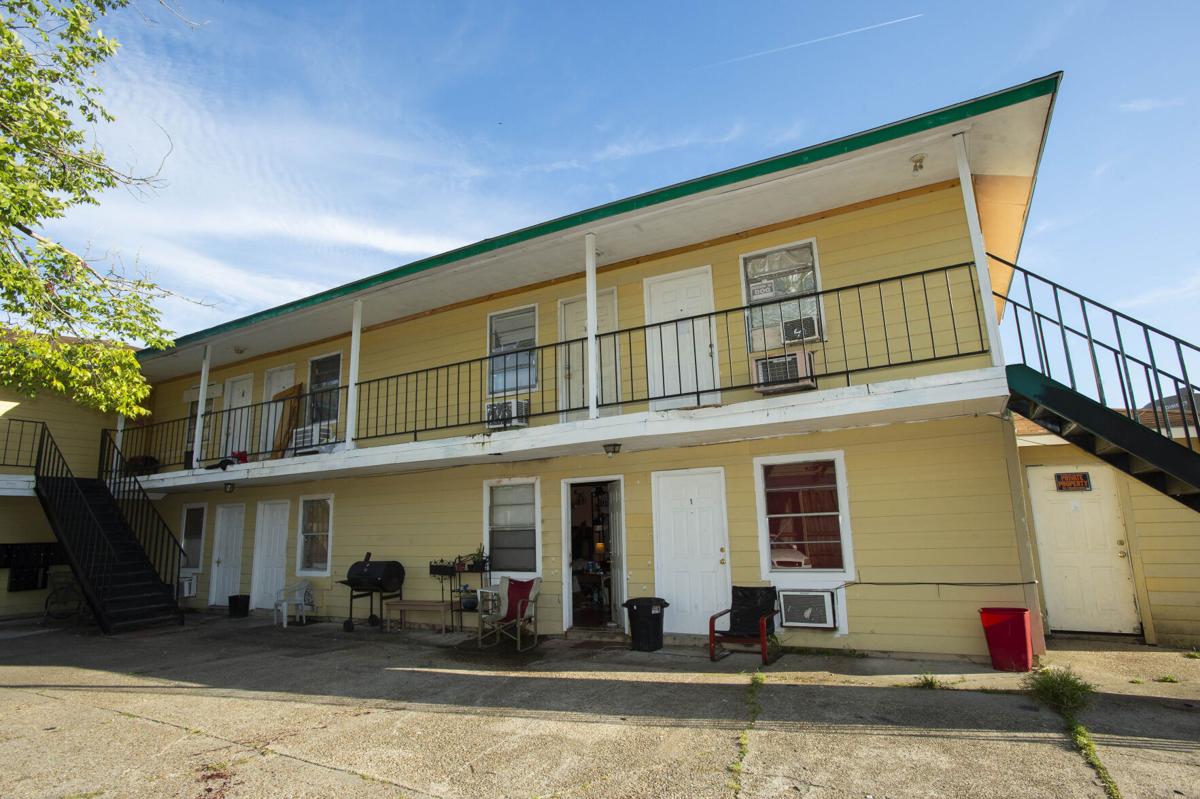 Baton Rouge Police Dept. is investigating an officer-involved shooting that left one person dead and a K-9 officer injured early Monday morning. Blood was on the ground and on the second residence door from the right on the first level of this apartment building at 4708 Tigerland Ave. BRPD's Sgt. L'Jean McKneely says police were searching for a wanted suspect around 1:35 a.m. Monday in the 4700 block of Tigerland Ave. when the shooting occurred.The suspect police were searching for died at the scene, McKneely said.

A double homicide at this small apartment complex in the 4700 block of Tigerland area in mid-October of this year is one of the recent incidents that reflect the changing face of the the Tigerland area, seen Wednesday, Nov. 20, 2019.

Baton Rouge Police Dept. is investigating an officer-involved shooting that left one person dead and a K-9 officer injured early Monday morning. Blood was on the ground and on the second residence door from the right on the first level of this apartment building at 4708 Tigerland Ave. BRPD's Sgt. L'Jean McKneely says police were searching for a wanted suspect around 1:35 a.m. Monday in the 4700 block of Tigerland Ave. when the shooting occurred.The suspect police were searching for died at the scene, McKneely said.

An aging Tigerland apartment complex plagued with violence — including an October double homicide and the fatal police shooting of a domestic violence suspect last month — could soon be forced to shut down after a Baton Rouge judge declared the property a nuisance.

The case exemplifies a larger problem facing the Tigerland area, which was developed decades ago to provide LSU students with upscale housing options near campus but has since deteriorated amid its abundance of cheap apartments and an uptick in crime. Both local law enforcement and LSU leaders have struggled with questions about Tigerland's future since students still flock to the cluster of bars at its entrance.

District Court Judge William Morvant declared the site a nuisance Tuesday, agreeing with arguments laid out by the East Baton Rouge District Attorney's Office. Prosecutors asked the court to intervene after Baton Rouge police responded to the Sandpiper Apartments on Tigerland Avenue to execute an arrest warrant, but ended up shooting the suspect when he pointed a gun at the officers.

That shooting occurred in the unit adjacent to where a man and woman were found shot to death in the October double homicide, which happened during a drug deal, according to police.

Baton Rouge police shot and killed a suspect in Tigerland early Monday while trying to take him into custody on a series of violent incidents,…

The petition alleged the complex should be deemed a nuisance based on an established pattern of illegal activity on the premises, including 195 calls for service that police have received from that address since the start of 2016. Those calls include batteries and a reported rape in addition to drug activity, shots fired and the recent homicides, according to the petition. The building is relatively small, with 14 individual units.

The property owner, Ibrahim Khoder, asked prosecutors and the judge to be more understanding of the massive challenges facing Tigerland landlords.

Khoder said he's owned the building in the 4700 block of Tigerland Avenue since the 1980s, and didn't start experiencing problems with violence and drug use until about 2016. He feels the DA's office is unfairly singling him out and blaming him for conditions that are rampant throughout the neighborhood, not unique to his complex.

"If they shut me down, they should shut down the whole place," he said after the hearing. "The entire neighborhood needs to be condemned, to be honest. You would be appalled to know some of the crimes that are happening there."

East Baton Rouge District Attorney Hillar Moore III acknowledged the problem is bigger than the Sandpiper apartments, but he said the complex stands out for the number of calls for service that police receive to that specific location. Building residents have expressed similar concerns in recent months, but also noted that many of Khoder's tenants are struggling with economic hardship and have faced rejection from other potential landlords. They nonetheless want to feel safe in their homes.

"I think this building is cursed," the complex manager said after the police shooting last month. "The number of people I've seen die from overdoses and shootings since I've lived here … you wouldn't believe."

The Sandpiper complex is toward the back of the Tigerland area, where many of the buildings have deteriorated over the past few decades as LSU students have passed them up in favor of newer complexes outside the neighborhood. Meanwhile crime and violence have risen and landlords have become less discerning when deciding whom to accept as tenants.

Some landlords will rent to anyone without performing a background check, which often means they can charge higher rent prices, according to residents. Khoder said he charges $650 a month with utilities included for studios and $700 a month without utilities for two-bedroom units in the Sandpiper complex, which is visibly rundown on the outside but appears otherwise functional.

Khoder said many of his tenants there don't have written lease agreements and some are unable to make regular monthly payments, instead helping out with cleaning and minor repairs around the building. He said these people are desperate, and he has a heart for helping others.

It was 1971 and the sun was rising over Tigerland. Large apartment complexes springing up offered LSU students what newspaper ads described as…

Concerns about crime in the area have grown loud enough that even the LSU student newspaper called for all of Tigerland to be razed to the ground following the 2019 double homicide.

But students still frequent the bars along Nicholson Drive that developed in the shadows of nearby apartment buildings. Those drinking establishments remain an LSU staple, a debaucherous rite of passage for many students, even as the surrounding apartments have become less desirable. Some argue it creates a dangerous combination: Drunk and disoriented college students can become easy targets for people looking to steal their belongings or otherwise take advantage of them outside the bars.

Khoder said he lived in Tigerland himself as an LSU student decades ago. That was not long after he immigrated here from Lebanon, young and curious and chasing the American dream. Buying rental properties in the neighborhood seemed like a lucrative enterprise, and for a while it was, Khoder said. But now business is not so good — many of his tenants at the Sandpiper Apartments have their rent paid through social services programs and receive other forms of assistance, he said.

Khoder said he's in his 70s and spends much of his time caring for his ailing wife. He doesn't have the time to babysit his tenants, he told the judge. He has evicted problematic residents in the past, but has sometimes received threats in the process.

"I came to America for opportunities, your honor, not to get killed by drug dealers," he said. "Some of these people are dangerous. … I need help with this. I'm not the police."

Wife of Tigerland shooting victim: 'Nobody does anything to deserve that. These are human lives'

Khoder said he would consider selling the property if possible. He also promised to take steps to clean it up in the meantime, though Moore said the landlord has ignored for several months repeated requests that he install security cameras.

Moore said that lack of action is what prompted him to file the petition and settle the dispute in court. Khoder arrived to his hearing several minutes late and without an attorney Tuesday morning. He was at times argumentative but ultimately bemoaned his current situation and pledged to cooperate.

The judge issued a preliminary injunction Tuesday, which prohibits any illegal activity on the premises that contributes to the nuisance designation. Another hearing has been scheduled for next Wednesday, when the judge will decide whether to make the injunction permanent.

State law allows for a court to order the closure of a nuisance property for up to five years. The judge could also require the defendant to take other reasonable steps to abate the nuisance without closing the premises.