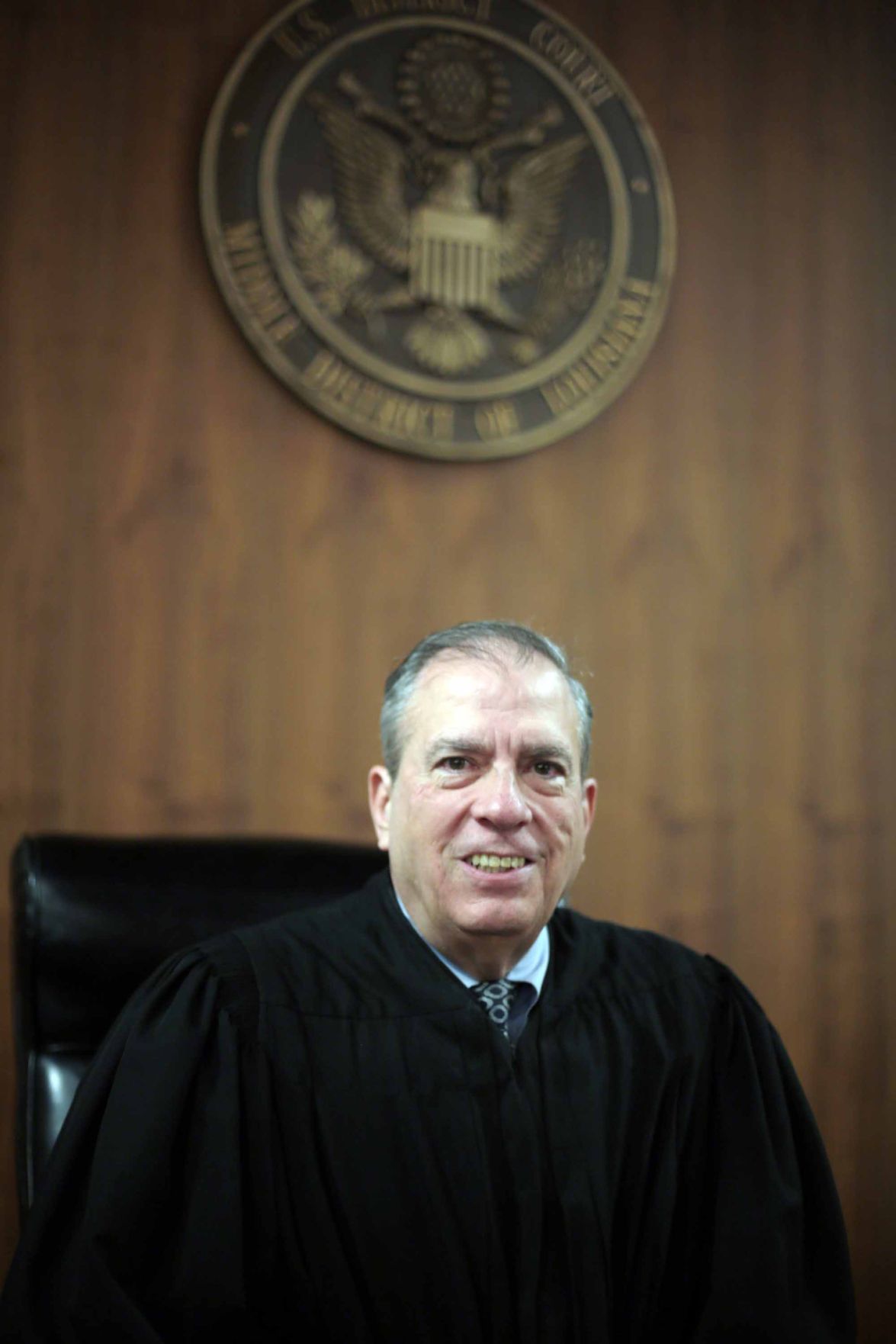 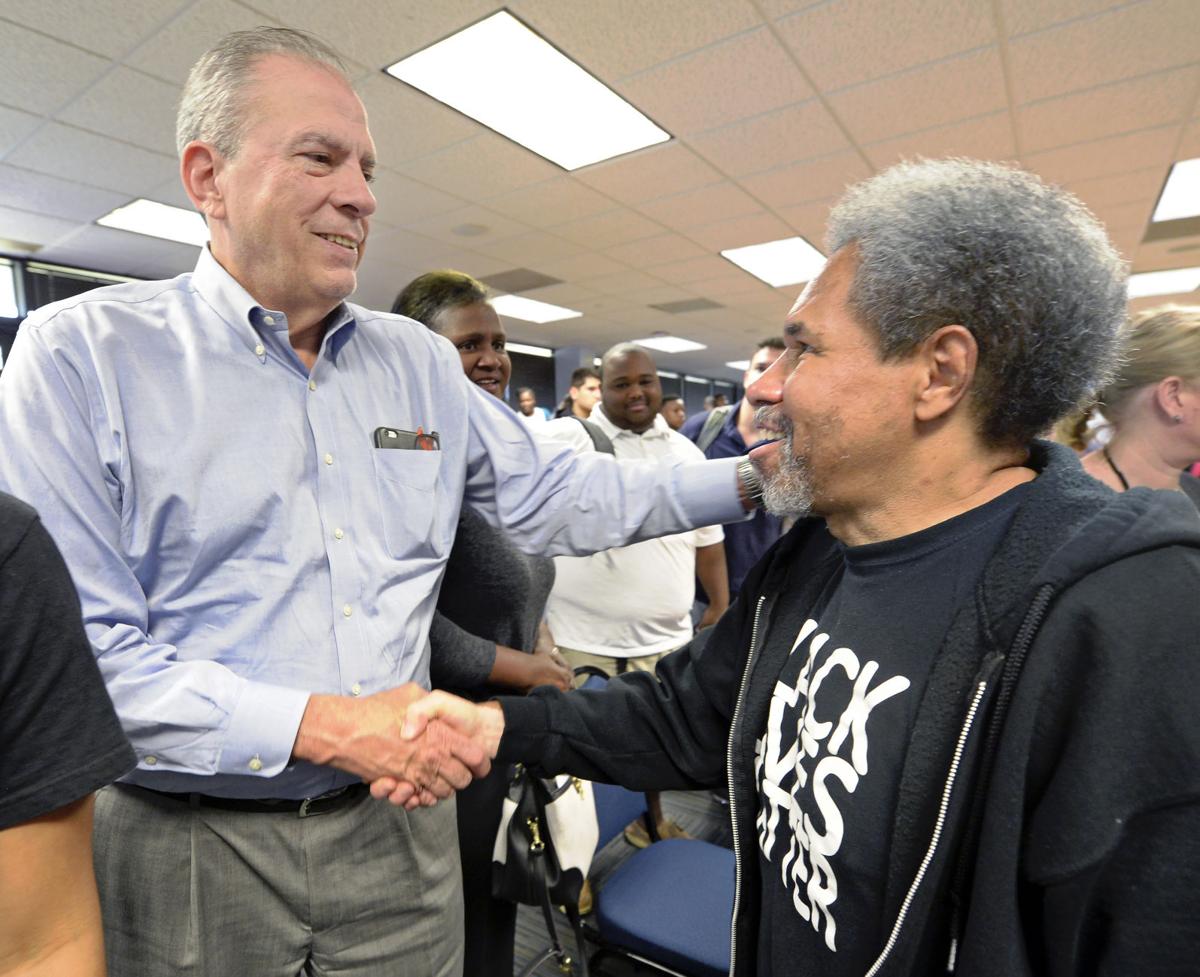 Judge James J. Brady, Senior Federal Judge for the Middle District of Louisiana, left, greets Albert Woodfox, right, a member of the Angola 3 who was released in February after decades in solitary confinement, after he spoke at the Southern University Law Center Monday Oct. 3, 2016.

Judge James J. Brady, Senior Federal Judge for the Middle District of Louisiana, left, greets Albert Woodfox, right, a member of the Angola 3 who was released in February after decades in solitary confinement, after he spoke at the Southern University Law Center Monday Oct. 3, 2016.

Brady was confirmed as a federal judge in 2000 after he was nominated for the position by President Bill Clinton. While he became a senior judge in December 2013, Jackson said Brady was still handling about 90 percent of the active cases that a full-time judge would be assigned.

"Judge Brady’s remarkable career as a federal judge was exemplary and his commitment to providing equal justice under the law resonated throughout his career as a lawyer and a judge,” Jackson said Saturday. “He will forever be remembered for his extraordinary integrity, compassion and devotion to the rule of law.”

Friends and colleagues described Brady as a compassionate, fair-minded, kind and humble family man. They also noted his love for politics and his reputation for picking winning Democratic Party candidates.

Acting U.S. Attorney Corey Amundson issued a statement Saturday expressing his sadness at the death of Brady, calling him, “a great man and a dedicated jurist with tremendous compassion, integrity and ability.”

Brady, a Covington native, graduated with a bachelor’s degree from Southeastern Louisiana College in 1966 before graduating from LSU’s law school in 1969. He was student body president at both universities and was a four-year letterman in varsity track at Southeastern.

After finishing his education, Brady practiced law privately between 1969 and 2000 while also serving as a board member on the Louisiana Board of Tax Appeals for a time and periodically teaching at LSU.

Prior to his appointment as a federal judge, Brady was heavily involved in state and national Democratic politics. He was chairman of the Louisiana Democratic Party from 1985 to 1991, when he was elected the president of the Association of State Democratic Chairs.

He served as a delegate to the Democratic National Convention several times between 1980 and 1996.

Brady was the general counsel for John Breaux’s first campaign for the Senate in 1986 and Breaux credits Brady with getting him elected. Around the time of that election, the GOP attempted what it described as a “ballot-integrity” program. Democrats saw it as an effort to suppress the minority vote that was expected to favor Breaux in the Senate election.

Breaux said Saturday that Brady handled the case expertly, filing injunctions against the Republican Party as he fought the GOP’s efforts in court. He said Brady’s skills in the court fight put him on a path to victory.

“Had it not been for Jim and his actions in catching it and litigating that effort, I would not have been elected to the U.S. senate back in 1986,” said Breaux, who later recommended to Clinton that he nominate Brady for the federal judgeship.

Brady had a habit of standing with winners in his political career, according to Jim Nickel, who served as executive director of the Louisiana Democratic Party when Brady was the chairman. Nickel said the two won nearly every race in the state that they worked on together.

Nickel said Brady also stood behind then-presidential nominee Clinton when Brady was the president of the State Chairs Association.

“He would lead all of those chairs to endorse Bill Clinton,” Nickel said. “When Bill was in fourth place in New Hampshire and everyone thought Clinton was done, Jim came to the rescue.”

Of all Brady’s accomplishments, Nickel said, Brady’s work as the state Democratic Party chairman stands out. He said Brady was “probably one of the most successful party chairman in state history.”

Brady was a rarity in modern-day politics because there was “never a hint of scandal or anything other than decency and honesty,” Nickel said.

“In this day and age of so many indecent people in politics, he was always decent, always kind,” Nickel said. “He was a rare person in public life that was always decent and kind. He never had a bad word to say.”

In a statement Saturday on Twitter, Democratic Party Chairwoman Karen Carter Peterson said Brady “spent his life serving Louisianians and he will be greatly missed.”

Breaux said that when he and then-President Clinton recommended Brady for the federal judgeship, some members of the Senate had reservations because of his past deep involvement in Democratic Party politics. But, he said, Brady’s experience and impartiality won them over.

Ultimately, Breaux said, Brady’s 17 years as an impartial and fair judge will stand as his greatest legacy from his time on the bench.

“Regardless of whether you’re on the plaintiff side or defense side, they always felt that Brady would give them a fair hearing and decision,” Breaux said.

Former U.S. Attorney Walt Green, who met Brady in 1999 when Green moved from Las Vegas to the middle district of Louisiana, echoed Breaux’s sentiment. He said Brady was always kind to everyone in his courtroom.

Green said it was Brady’s civility and ability to bring both sides together that helped him settle the longest school desegregation case in the United States, Davis, et al. v. East Baton Rouge Parish School Board et al.

In 2003, Brady signed the Final Settlement Agreement that marked the end to the nearly 50-year-old case.

“It’s a testament to him and a tribute to him,” Green said.

In 2015, Brady ordered the release of Albert Woodfox, the last "Angola 3" member still in prison after decades of solitary confinement. Brady also barred a retrial for Woodfox, 68 at the time, who was awaiting a third trial in the 1972 stabbing death of a Louisiana State Pentientiary at Angola guard.

Brady briefly returned to LSU about two weeks ago when he guest taught Breaux’s class in the school of mass communications graduate program. Breaux, who was only one year ahead of Brady at LSU law, said his students appreciated hearing the countless stories that Brady had to share.

“He’d taken senior status, but he was working as hard as any full-time judge,” Breaux said. “He wasn’t ready to retire.”

When Brady took senior status in 2013, John W. deGravelles was nominated by President Barack Obama to fill Brady’s full-time seat. Jackson said a new judge will not have to be nominated and the current judges will take on Brady’s cases.

Kyle France, who met Brady through Democratic Party politics and working for Breaux, said Brady was a humble person with a big heart who would make anyone, regardless of their walk of life, feel like his top priority when he spoke with them.

“Just really, really one of those people that you feel blessed to have crossed his path in your lifetime,” France said.

Brady is survived by his wife, Karen, two children, Sean and Missy, and multiple grandchildren.