As Louisiana legislators debated the legalization of marijuana, East Baton Rouge's top prosecutor told them the evidence still isn't conclusive on whether it's a good idea, so the state should proceed with caution.

District Attorney Hillar Moore’s office spent weeks compiling data and sifting through studies on Colorado and Washington, which became the first states to legalize marijuana in 2012.

In a report sent to lawmakers, the office concluded the scope of research is too limited to back up broad positive or negative claims about legalization, so the state should proceed cautiously before going for full legalization. 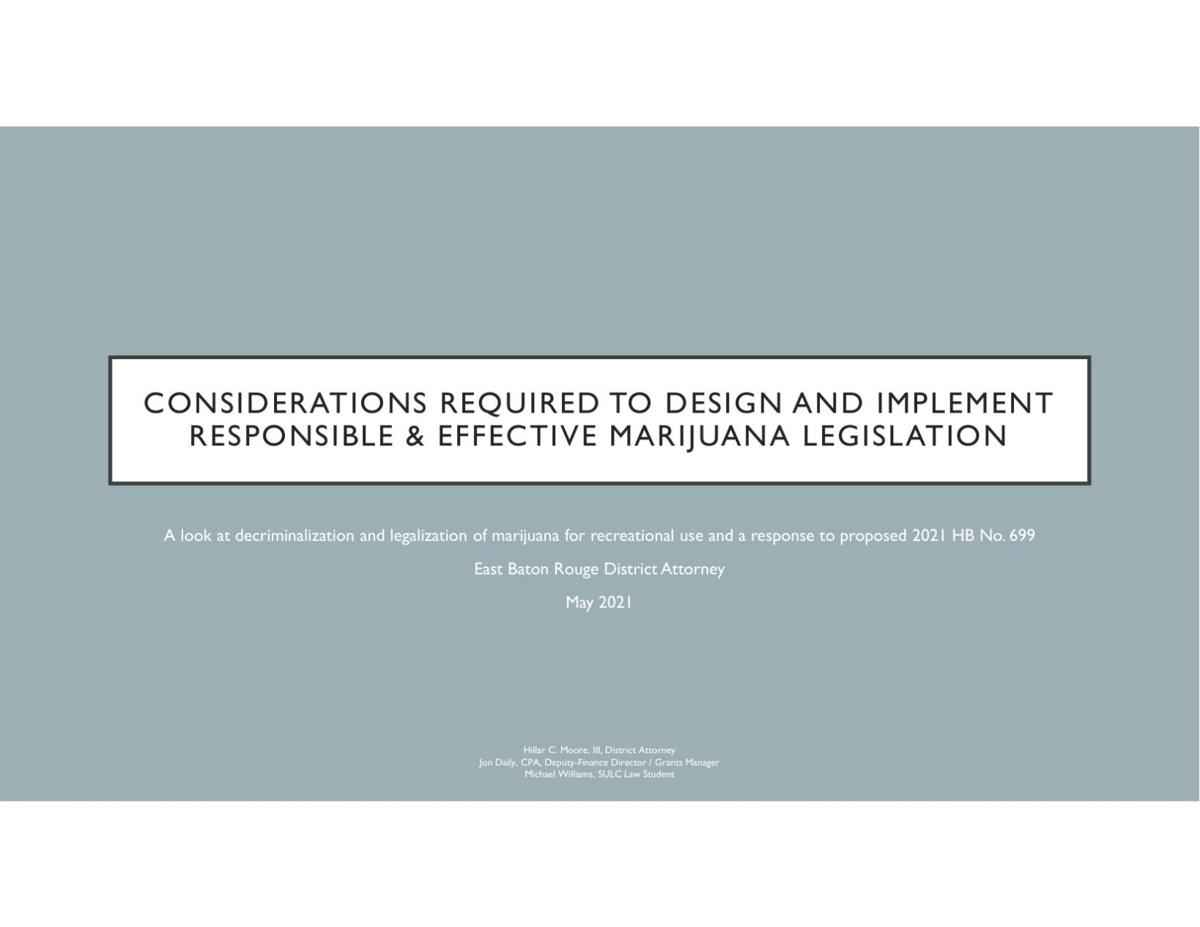 “EBRDA’s primary goal is to seek and follow a path that best ensures the health, safety and well-being of the citizens of its community while acting the State of Louisiana’s best interest," Moore said in the report. "Therefore, EBRDA is hesitant to support the current proposed bills to legalize, regulate, and tax the recreational use of marijuana in the absence of a better understanding of the risks.”

These risks include how legalization would influence traffic accidents and violent crime, tax revenue and overdoses.

A bill to fully legalize marijuana was defeated on a 47-48 vote in the state House. However, supporters and even some opponents said the bill had advanced further than ever before, potentially a signal of shifting attitudes.

Moore said legalization could produce more than $120 million per year in tax revenues for the state, he noted that societal, workplace and insurance costs could cost the state “millions more.”

Moore also warned of negative affects on cognitive development and other health issues in youth who use marijuana. He advised lawmakers to focus on preventing marijuana use among youth during the legalization debate.

Another broad concern was public safety. The report said there is conflicting evidence on whether or not marijuana legalization has influenced a rise in traffic accidents and fatalities. Similarly, the report sought a thorough examination of violent crime rates in states where legalization has been rolled out — particularly since Louisiana's crime rate is higher than the national average.

Moore also noted marijuana's connection to substance abuse disorders. He urged caution in light of the upward trend in overdose deaths in the state and parish that have skyrocketed in recent years — largely attributed to opioids.

The report included an extensive list of more than 60 stakeholders who Moore said should be consulted in any legalization decision, including the state health department, law enforcement associations and childhood education commissions, among others.

Moore also listed a number of comments and concerns with proposed legislation, as well as lingering questions, such as how legalization will affect asset forfeiture or anti-smoking campaigns.

The report did say Moore supports a bill "decriminalizing" marijuana. A bill is advancing through the legislature that would give those caught with less than a half-ounce of marijuana — an amount seen as for personal use instead of dealing — a summons instead of an arrest, and avoid jail time.

Moore also supports further research, more input from other voices, reflection of other state experiences and authorizing a subcommittee to study the impact of legalizing possession.

"The process should not be rushed," Moore said. "There must be meticulous consideration of the effects of legalization in order to develop responsible legislation, and effective regulation."

Matt and Crystal Grayson are growing their Broussard hemp farm into what they hope will one day become the Amazon of the cannabis world. The f…