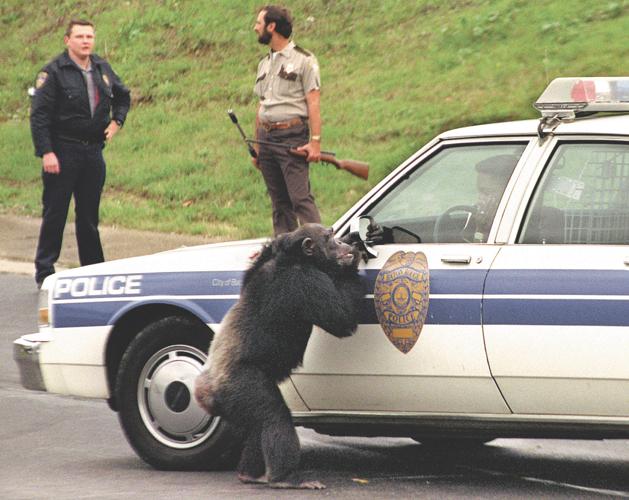 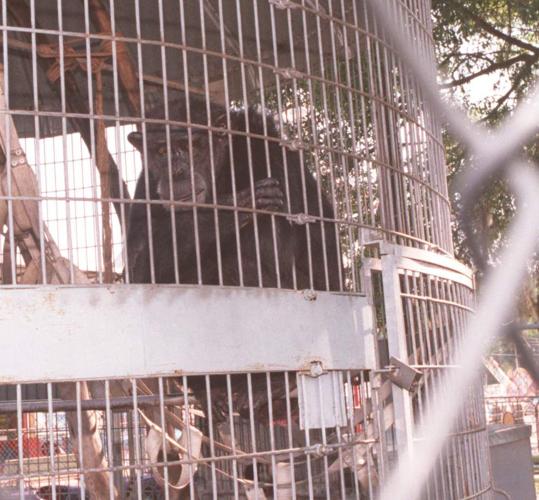 Advocate Staff Photograph by Alicia Wagner. File photo of Candy the chimpanzee in her cage at Fun Fair Park.

Advocate Staff Photograph by Alicia Wagner. File photo of Candy the chimpanzee in her cage at Fun Fair Park.

Candy the chimpanzee may have died April 21 at Dixie Landin', but a 2015 lawsuit by animal rights advocates who sought to have her removed from the Baton Rouge amusement park lives on — at least for now.

Less than a week after the 54-year-old chimp's reported death, Dixie Landin' and Candy's owner, Sam Haynes Jr., filed a motion in Baton Rouge federal court to have the suit dismissed based on her passing.

But in a written opposition last month to the motion, animal rights advocates question Candy's death by using such phrases as "alleged death" and "assuming Candy is in fact dead" and urge U.S. District Judge James Brady not to dismiss the suit.

"Sadly, it appears that animal activists are using Candy's death to generate publicity and donations," Michael Reese Davis, an attorney for Dixie Landin' and Haynes, said Friday. "Unfortunately, this has caused the Haynes family to receive more threats and incur further legal expense. The Haynes family simply seeks an end to this nightmare."

Animal Legal Defense Fund lawyer Matthew Liebman, one of the attorneys representing the animal rights advocates, said Dixie Landin' and Haynes "have refused to provide us with even the most basic verification of Candy's death and what caused it."

"Frankly, we don't know what they have to hide, but their behavior on this issue is certainly cause for suspicion," he said Friday.

The motion filed April 26 by Dixie Landin' and Haynes includes a declaration by Haynes that Candy fell ill April 20 and was seen by her veterinarian Dr. Gordon Pirie within an hour of being called.

"He provided a course of treatment for Candy, which was followed," Haynes stated. "Although Candy seemed to improve ... Candy passed away" the following morning.

The opposition by the Coalition of Louisiana Animal Advocates and others to the dismissal motion includes a declaration by Dr. Raven Jackson-Jewett, a veterinarian at Chimp Haven. The chimpanzee sanctuary in north Louisiana is where the lawsuit sought to have Candy moved.

Jackson-Jewett said she visited Dixie Landin' on April 19, less than 48 hours before Candy's reported passing, and closely observed her.

"I did not observe any condition with Candy that would have led me to conclude she might be in danger of imminent natural death," she wrote in her May 17 declaration.

"Given my recent observation of Candy, I found this claim (of her death) suspicious because my experience with female chimpanzees has demonstrated it is highly unusual that a natural death would occur suddenly in the absence of a known condition," Jackson-Jewett said.

In their reply Wednesday to the court filing by the animal advocates, attorneys for Dixie Landin' and Haynes say the insinuation that Candy's death was suspicious has caused the amusement park and the chimp's owner to be "inundated with outlandish and threatening hate emails and postings on Facebook."

Davis argues in Wednesday's court filing that Jackson-Jewett's "dubious suspicions are belied by Chimp Haven's reports of necropsies, some of which Ms. Jackson-Jewett conducted and which show that chimpanzees can and do die quickly." Necropsy is the term for an autopsy on an animal.

"The Haynes family can only be asked so many ways whether Candy is dead ..." Davis adds, calling the animal advocates' opposition to the motion to dismiss "harassment."

Candy, according to court documents, had been part of the Haynes family since 1963 and was provided with proper care "in full compliance with the Animal Welfare Act."

In addition to requesting copies of records that "independently demonstrate Candy is in fact deceased," attorneys for the animal advocates argue in their opposition that the lawsuit should not be dismissed because it also seeks to prevent Dixie Landin' and Haynes from violating the Endangered Species Act in the future.

Despite animal rights advocates’ allegations to the contrary, Candy the chimpanzee is health…

Dixie Landin' and Haynes "ultimately control whether they will seek to obtain a replacement for Candy," note the animal advocates' attorneys, which include Emily Henrion Posner of New Orleans, the LSU Paul M. Hebert Law Center's Ken Levy, and Liebman.

The suit alleged that keeping Candy alone in a cage was cruel, barbaric, archaic and went against current federal law that mandates primate exhibits support an animal's physical and mental health. Dixie Landin' is next to Blue Bayou Water Park on Interstate 10 and Highland Road.

In the past, Candy performed at the now-closed Fun Fair Park in Baton Rouge and appeared regularly on the old "Buckskin Bill" show before moving to Dixie Landin' in the late 1990s.

A 2015 lawsuit by animal rights advocates who sought to have Candy the chimpanzee removed from Dixie Landin' amusement park, where she lived f…