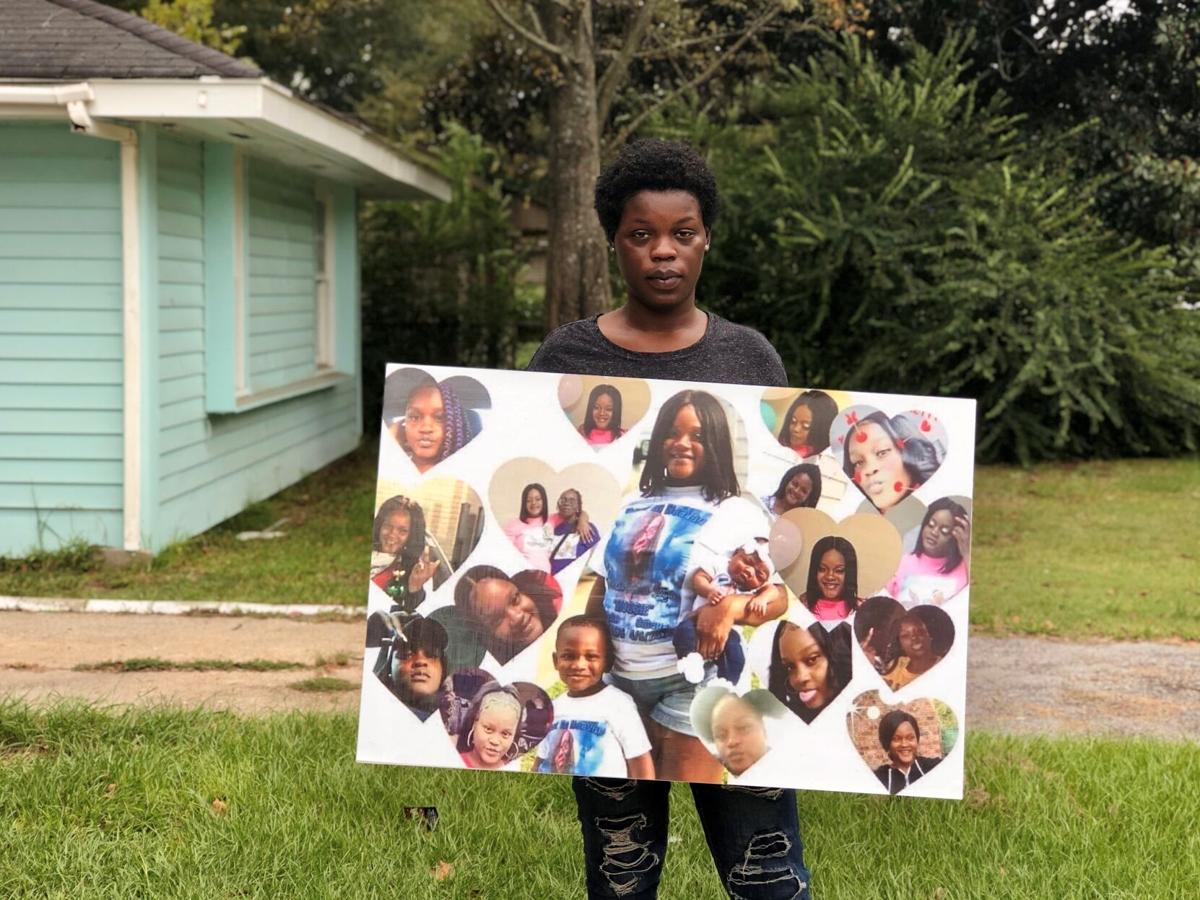 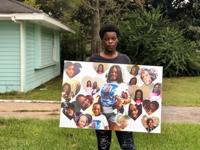 Marlina Taylor stands in her front yard, holding a collage of photos memorializing her sister. Marshanda Taylor, 21, was killed Aug. 21 when someone shot up the house she was staying in, according to Baton Rouge police. She left behind an infant daughter and 3-year-old son. The case remains unsolved. 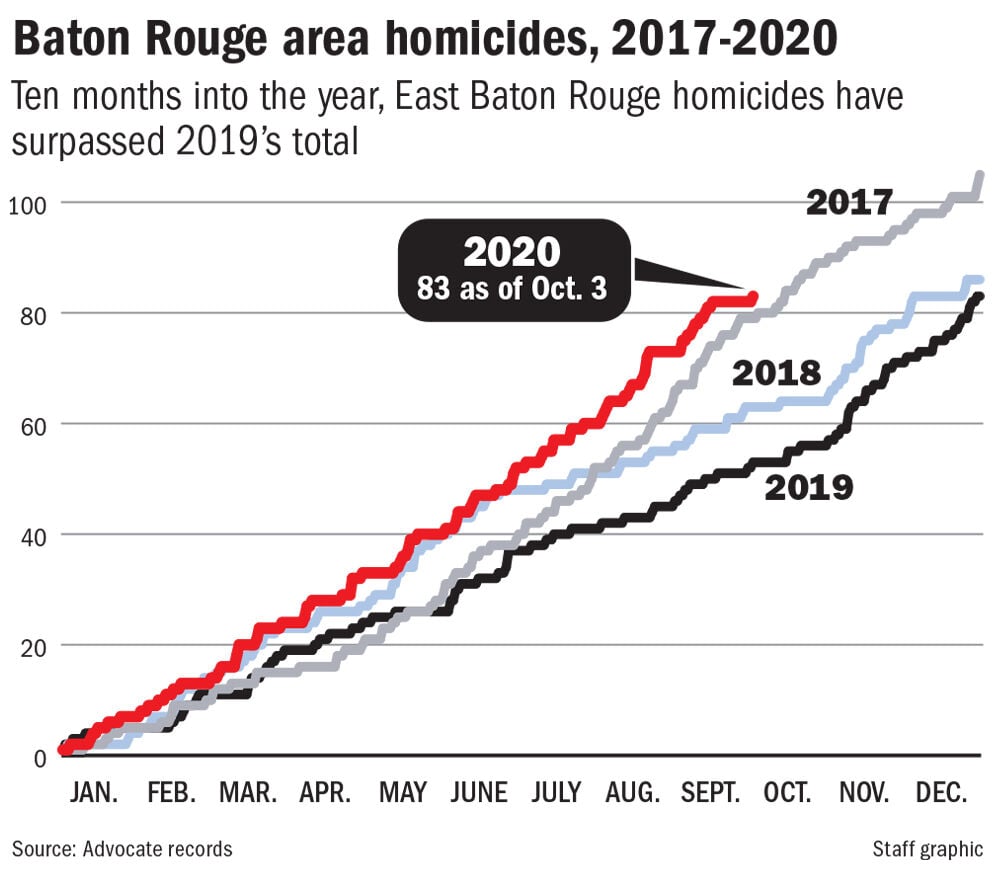 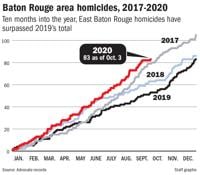 She sees two babies growing up without their mother, sees them struggling to understand why she was taken away, wondering how different their lives could have been.

Marshanda Taylor was sleeping next to her infant daughter when bullets shattered the bedroom windows and struck her multiple times, her sister Marlina Taylor has learned in conversations with witnesses. There were seven other people in the house at the time, but all were uninjured.

These stories are becoming more common than ever as the murder rate in Baton Rouge reaches a historic high amid the ongoing coronavirus pandemic.

A fatal shooting Friday evening marked the parish's 83rd homicide so far this year, according to Advocate records, which matches the total for all of 2019 — with three months still remaining in 2020. That grim milestone serves as a reminder that 2020 still threatens to become the most murderous year on record for East Baton Rouge Parish.

Another person was found shot to death on Saturday, police said, but little information was available about that 84th homicide Saturday evening.

Local officials and law enforcement leaders have repeatedly pleaded for peace. While the past few weeks have offered a short reprieve from otherwise persistent gun violence, the coming months will determine the full extent of the damage.

Marshanda Taylor, 21, was pronounced dead around 2:30 a.m. on Aug. 21, less than five months after the birth of her daughter. She was one of three people killed across the parish that day.

Baton Rouge police said evidence indicates someone shot up the house she was staying at, one of several homes lining Goudchaux Street in Scotlandville whose boarded up windows are now the only indication of that deadly incident. Detectives have not determined the shooter's intended target, and the case remains unsolved.

"You didn't have to do that, just acting with no sympathy, no regard for life. There were children in that house," Marlina Taylor said, addressing her sister's unidentified killer. "I have to deal with this pain for the rest of my life."

If the violence continues at its current pace, 2020 will break the previous record of 106 homicides parishwide in 2017 — when killings increased following the 2016 floods and protests over the police shooting of Alton Sterling.

The Advocate tracks intentional and unjustified homicides in East Baton Rouge. The numbers are unofficial and could change based on whether incidents are ruled accidental or justified and vice versa.

Overall crime is down in Baton Rouge, largely due to decreased property crime and traffic violations that experts have pinned on people spending more time at home, inadvertently protecting their property, and driving less.

The recent increase in homicides also coincided with the start of the pandemic and lockdown measures. Other cities have seen similar increases, attributed in part to heightened stress and economic hardship. Officials here and elsewhere have said that relatively minor disagreements are more often escalating into shots fired, though the exact reason for that heightened violence is unclear.

Delays in the local court system, which closed for months in the spring because of the virus, and some changes to policing practices aimed at reducing the jail population could also be contributing factors, according to experts and officials.

One thing that stands out is the increase in domestic violence homicides. Experts predicted that months ago since more victims are now trapped at home with their abusers, often facing added financial stress and other hardships that could exacerbate existing abuse.

At least 13 of the homicides this year have been the result of domestic violence — compared to four deaths in two separate domestic incidents last year.

Baton Rouge Police Chief Murphy Paul said in July that he was worried about the murder rate during the first six months of 2020. More than 30 lives have been lost to violence since then.

Baton Rouge police chief: 'I am worried' about homicide rate amid coronavirus pandemic

In addition to delivering a global pandemic and unprecedented economic downturn, 2020 is threatening to become Baton Rouge's most murderous ye…

Mayor-President Sharon Weston Broome recently announced her plans to use $2.5 million in federal pandemic response funding to address public safety. Local organizations focused on social services and outreach can apply for a share of the money.

"We know crime is more likely to occur when people are unable to meet their most basic needs: an education, a stable income, transportation, or access to nutritious food and health care," she said during a press conference announcing the initiative.

Broome's announcement came just a few weeks after a toddler was killed when someone shot into her father's car on South Flannery Road. The case still hasn't been solved, despite a public plea from the police chief asking witnesses to come forward.

Paul declined an interview request for this story but submitted a written statement noting that Baton Rouge is not alone in the recent increase in homicides, which is reflected nationwide.

"2020 has been a trying year," he said. "The Baton Rouge Police Department is working hard every day to protect the people we serve."

As homicides continue to rise in East Baton Rouge Parish during the coronavirus pandemic, the city government is using federal funding to find…

"We had more memories to make. We are still young," Marlina Taylor said during a recent interview at her home. She sometimes paused while speaking, staring blankly into the distance and imagining a future without her best friend.

The sisters were born less than two years apart and grew up in New Iberia, then moved with their mom to Baton Rouge as teenagers.

The women were still reeling from the death of their mother in April following a long illness. Both were counting on one another for support and making plans for their futures — plans that included college degrees, new cars, maybe even moving to Texas and opening a salon that their children would someday inherit.

Marshanda Taylor was staying with her boyfriend at his family's house in Scotlandville, along with her infant daughter and toddler son, when the shooting occurred.

The day before she died, she spent hours cooking red beans and rice, repeatedly calling her sister for advice and instructions.

She would have turned 22 next Thursday. Instead of partying together, Marlina Taylor is planning a memorial alone, planning to celebrate a life well lived, a sister gone too soon.

BRPD chief issues call to action amid spiking homicide rate: 'The cycle must be broken'

One person was pronounced dead after a reported shooting Saturday evening at an apartment complex on Highland Road, Baton Rouge police said.