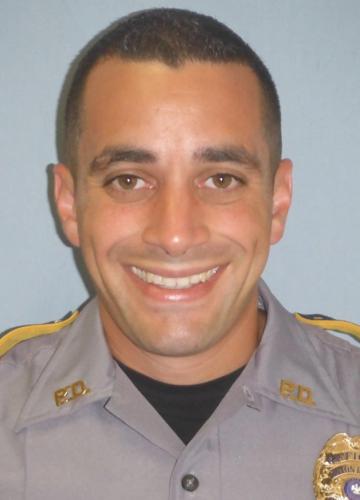 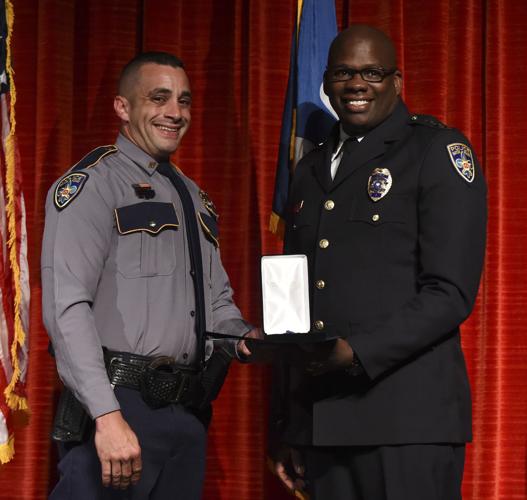 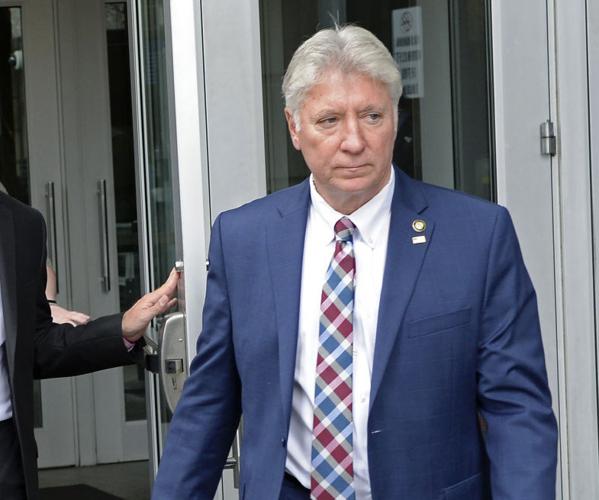 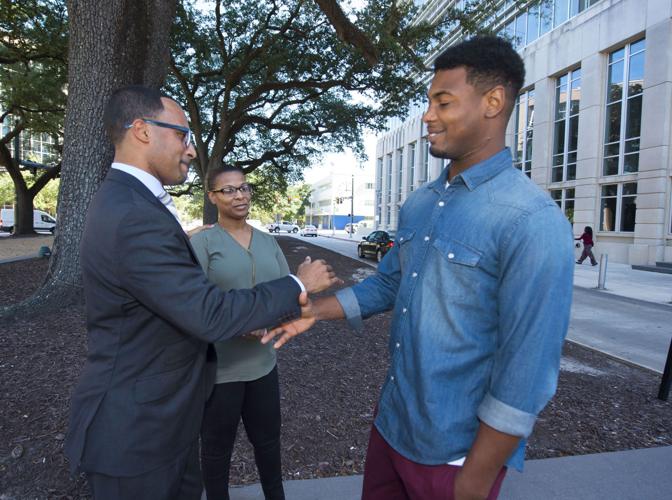 Attorney Ronald Haley Jr., left, shakes hands with his client Raheem Howard, right, as Howard's mother Tenesia Howard, center, looks on after a press conference Oct. 12, 2018, discussing the firing of Baton Rouge Police Department officer Yuseff Hamadeh, who had claimed Raheem Howard had fired at him first before Hamadeh fired at Howard, during a traffic stop on Aug. 7, 2018 near Memorial Stadium. An internal investigation did not support Hamadeh's claim.

Attorney Ronald Haley Jr., left, shakes hands with his client Raheem Howard, right, as Howard's mother Tenesia Howard, center, looks on after a press conference Oct. 12, 2018, discussing the firing of Baton Rouge Police Department officer Yuseff Hamadeh, who had claimed Raheem Howard had fired at him first before Hamadeh fired at Howard, during a traffic stop on Aug. 7, 2018 near Memorial Stadium. An internal investigation did not support Hamadeh's claim.

Baton Rouge's prosecutors have begun reviewing dozens of cases involving a former police officer found untruthful in a high-profile case in which he shot at a fleeing motorist, landing Yuseff Hamadeh on a list of 30 local law enforcement officers with compromising pasts that could affect their credibility during a trial.

About a third of those officers fall under the same category as Hamadeh, having falsified a report or lied in some aspect of their job, while the rest have been arrested or convicted of a crime. But of the entire list of officers considered potential risks for prosecutors, about half remain at their posts, making arrests, conducting investigations and even testifying against defendants. The other half have been terminated from their positions or resigned, according to the list provided by the East Baton Rouge District Attorney's Office after a public records request.

"Everything about a trial is about credibility," said LSU law professor Ken Levy, who specializes in criminal law. "Officers lie and if they have a record of lying or covering up, that is indispensable information. … Without it, a defendant is not going to get a fair trial."

District Attorney Hillar Moore III has kept such a list of suspect officers since 2015 for that reason, he said. It allows his attorneys to easily turn over an officer's past indiscretions to defense lawyers when relevant. But Hamadeh's Oct. 11 termination, which came after a determination he had been untruthful during an investigation of the traffic-stop-turned-officer-shooting, has had the greatest impact on Moore's office compared to past additions to his list, the parish's top prosecutor said.

Hamadeh had been assigned to the city's highly active Street Crimes Unit, where he became involved in a large number of arrests resulting primarily in gun and drug charges. At least seven felony cases that relied on Hamadeh's word have already been dropped by prosecutors. And according to records from Moore's office, Hamadeh is listed as a witness in 113 cases where prosecutors have pressed charges — which leaves the full effect of the now-questioned officer still to be seen.

"We’re trying to go through that review process in the office," Moore said. "It will be case-by-case."

Moore began keeping a list of suspect officers after learning about the practice from prosecutors across the nation. The files are often called 'Brady lists,' after the 1963 Supreme Court case Brady v. Maryland that found prosecutors cannot withhold favorable evidence from the defense.

"Constitutionally, we have that obligation to do that," Moore said. His office keeps track of officers serving in East Baton Rouge Parish and separates suspect ones into two categories: officers who have been found untruthful and those who have been arrested or convicted of a crime. In both instances prosecutors are required to disclose these histories, though Moore said it's often not relevant.

The untruthfulness section includes 10 officers, four of whom were at one point employed by BRPD. Hamadeh was added most recently when Baton Rouge Police Chief Murphy Paul terminated him after an internal investigation found him untruthful in how he reported details of an Aug. 7 traffic stop that escalated to a shooting. Hamadeh chased 21-year-old Raheem Howard when the man fled a traffic stop, and during the pursuit Hamadeh shot at Howard. The officer claimed he was returning fire; however, evidence later showed only one gunshot was fired — from Hamadeh's gun — and Moore dropped the case against Howard, who was initially arrested on attempted murder of a police officer. Moore did note that the untruthfulness determination from Paul came because Hamadeh lied about reporting a minor crash that occurred during the traffic stop to his superior, when he actually did not.

The only current Baton Rouge Police officer on the list, Donnie Hallmark, was suspended in 2017 after he failed to report a crash involving his police unit, then lied to supervisors about it, according to internal affairs documents. Hallmark still serves as a uniform patrol officer, a police spokesman said. The document also includes three former Baton Rouge Police officers; in addition to Hamadeh, there's Michelle Patterson, who was arrested for filing a false police report after a marijuana arrest also in 2017, and Evelyn Dunn, who resigned amid an investigation into how she lied about responding to a call about a shooting, but never actually went to the scene, and investigators later found someone killed.

The untruthfulness list includes two current sheriff's deputies, Kristopher Daniels and Chad Collins, who were both suspended following a 2014 drug bust that escalated into a shooting. Internal affairs investigators found they made false statements about facts of the shooting, including whether they were wearing their bulletproof vests at the time. Resigned deputy Gerrica Smith, also on the list, was involved in the same incident, and was included in the false statements. Daniels and Collins remain on uniform patrol, a spokeswoman for the sheriff said.

Why DA refuses to proceed with case vs. man accused of firing at Baton Rouge officer

Resigned deputy Tenoa Alex is also on the untruthful list, after he was found to have filed a false report about a 2015 burglary.

And finally State Police troopers Willie Palmer and Brian Jefferson are included for separate incidents, though both remain assigned to patrol, according to a State Police spokesman. Internal investigators found Palmer lied about responding to a 2016 scene about a vehicle in a ditch; and Jefferson lied in two 2014 instances, one in how he responded to a DWI arrest and another after he crashed into a mailbox.

There are 20 officers included on the list for arrests or convictions, but most have been fired or resigned. The list includes two of the Baton Rouge police officers who were arrested in a 2014 incident in a BREC park where they were accused, in part, of forcing a woman to perform a sex act, though they were later acquitted. It also includes the Baton Rouge police officer who earlier this year was speeding at the time of wreck in which a baby died.

The smaller group of officers who remain in law enforcement were arrested or convicted of DWI, domestic violence or simple battery, records show. Moore said officers can come off the list if their case is expunged.

And while some of the instances that put officers on the list can seem small, whether a crash into a mailbox or DWI, Howard's attorney, Ronald Haley Jr., said he's glad to see Moore is tracking them all.

On this there's agreement: Raheem Howard fled from the traffic stop conducted by Baton Rouge police officer Yuseff Hamadeh on Aug. 7 about 6:3…

“If something that seems to be so small, then it opens the possibility that they would would make something up for something much larger," Haley said. But he also noted the challenges of a police officer's job, and said the most scrutiny should be put on cases where a lie becomes a crime, like putting someone else in jail — as he believes Hamadeh did.

The list in Baton Rouge does not compare to ones in many other cities, where media have reported hundreds of suspect officers like in Los Angeles, but Levy, the law professor, said keeping it will bring better justice for residents in two ways.

"One is fairness and the other is deterrence," Levy said. "You want as fair as possible trial, and you also want to create an incentive that (officers) won't get away with (misconduct)."

'The highest degree of integrity'

While prosecutors and defense attorneys scrutinize ongoing cases where Hamadeh was listed as a witness, weighing if the case rests on his word or there is enough other evidence, Haley said he expects prior cases to come back up where Hamadeh's testimony led to a conviction or guilty plea.

“I think it absolutely has potential for older cases to be looked at," Haley said. "Clearly his trustworthiness, or lack thereof, could be considered new evidence."

Moore said he doesn't know how that will be addressed in court, because he is not sure it ever has come up.

“Is there a difference between the cases before that (untruthfulness) finding or after?" Moore said. "I don’t know the answer."

In the year since Henry and Helen Frazier found out their 35-year-old son had been fatally shot by a Baton Rouge police officer, the couple ha…

But one specific case Haley said needs to be reconsidered is one that he believes frighteningly mirrored Howard's arrest — but the fleeing motorist ended up dead instead of jailed.

In June 2017, Hamadeh shot and killed 35-year-old Jordan Frazier, after he turned and pointed a weapon at officers while running from a traffic stop, police say. That case was investigated by State Police, and while the investigation is over, Moore's office has not yet announced if he will bring charges against Hamadeh. Moore is also considering potential charges in the Howard case, though he pointed out Baton Rouge police investigators did not find reason to arrest the former officer.

"Police officers have a lot of power, and with that power comes sometimes a greater responsibility," Haley said. "You’re dealing with people's lives and liberty. You should be held to the highest degree of integrity when you’re on the job."

Fired Baton Rouge officer to appeal, stands by disputed claim he was shot at, attorney says

Former Baton Rouge police officer Yuseff Hamadeh, who was fired last week after an investigation into an August shooting, will appeal that dec…