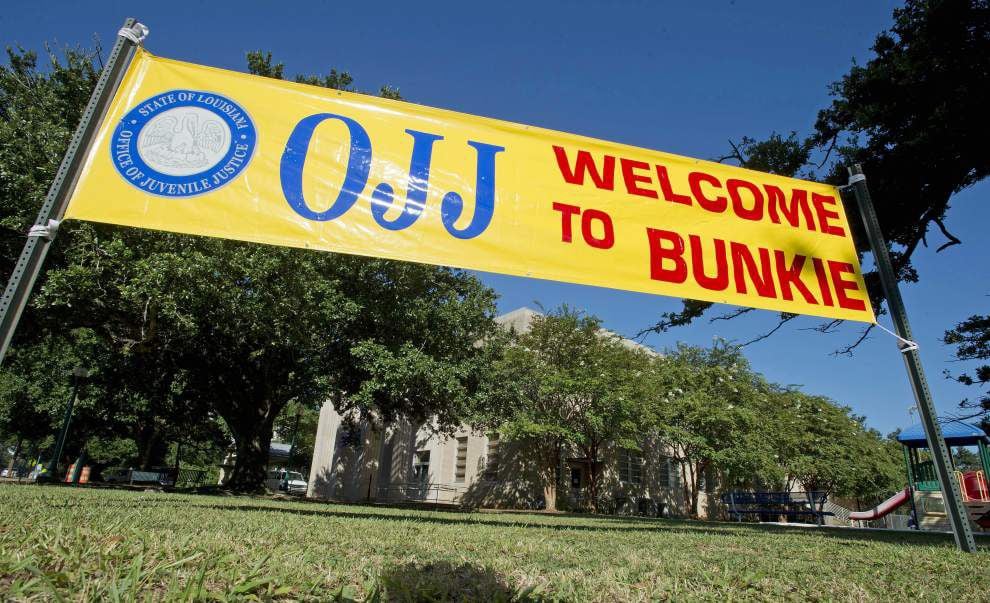 Advocate staff photo by TRAVIS SPRADLING -- Sign outside Bunkie's Haas Auditorium, marking the Office of Juvenile Justice's nearby ground-breaking ceremony Thursday, at the future site of the Acadiana Center for Youth, a long-awaited secure care juvenile facility near Bunkie. 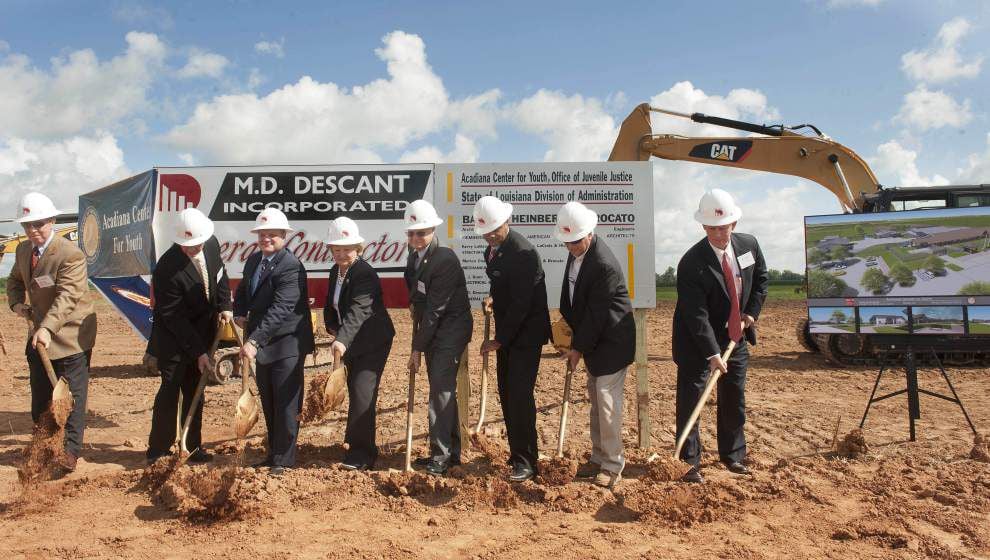 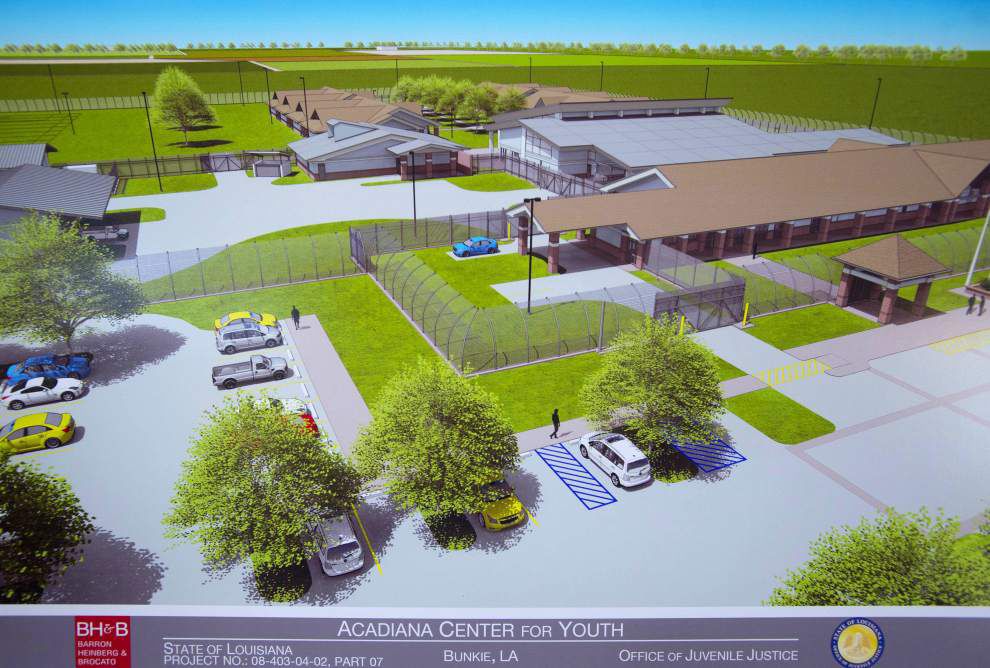 Advocate staff photo by TRAVIS SPRADLING -- Architectural rendering of the Office of Juvenile Justice's Acadiana Center for Youth, a long-awaited secure care juvenile facility near Bunkie. The center will be the first of its kind built under the new therapeutic care model, after more than a decades-worth of juvenile justice reform. 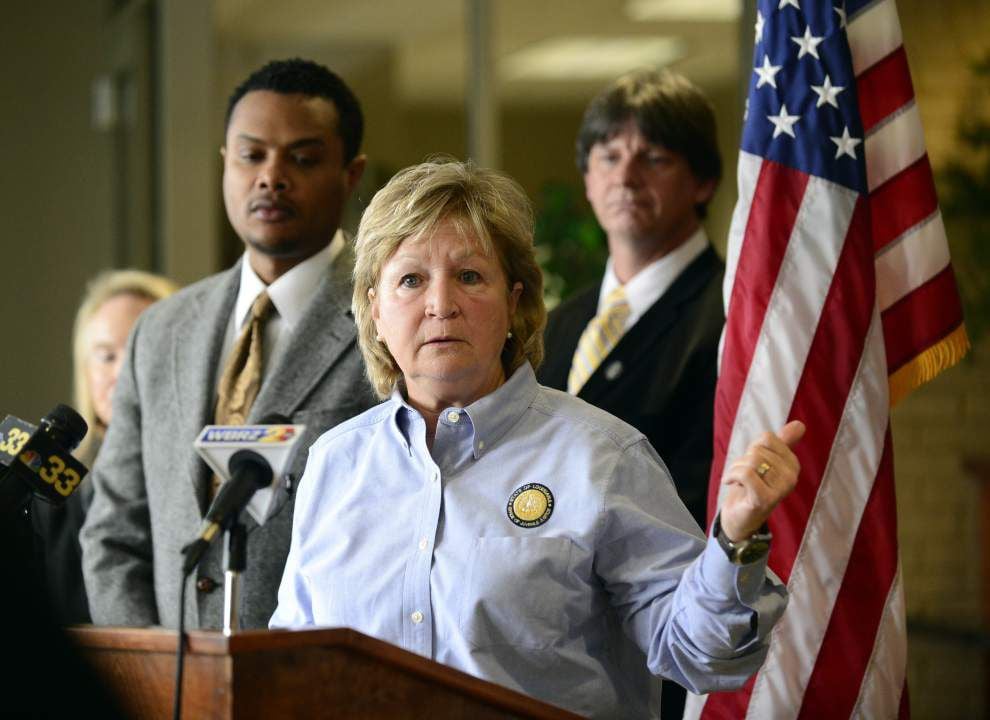 Advocate staff photo by TRAVIS SPRADLING -- Sign outside Bunkie's Haas Auditorium, marking the Office of Juvenile Justice's nearby ground-breaking ceremony Thursday, at the future site of the Acadiana Center for Youth, a long-awaited secure care juvenile facility near Bunkie.

Advocate staff photo by TRAVIS SPRADLING -- Architectural rendering of the Office of Juvenile Justice's Acadiana Center for Youth, a long-awaited secure care juvenile facility near Bunkie. The center will be the first of its kind built under the new therapeutic care model, after more than a decades-worth of juvenile justice reform.

Several recent Louisiana governors have pledged to revamp and change how the state deals with juvenile lawbreakers, with successive administrations embracing a policy of trying to rehabilitate young offenders instead of just locking them up.

But advocates aren’t satisfied with how state government has recently lived up to those promises, in the past few years criticizing hefty budget cuts to the Office of Juvenile Justice under Gov. Bobby Jindal. Now they want Gov.-elect John Bel Edwards to push forward more aggressively, from directing more money to community-based programs to changing the law to end Louisiana’s policy of treating 17-year-olds as adult criminals.

“We have stagnated in a lot of important areas, and we’ve even stepped backward,” said Josh Perry, executive director of the Louisiana Center for Children’s Rights. “I have hope and faith that (Edwards) will exercise his discretion wisely to choose people who are genuinely committed.”

One key question as Edwards makes appointments is whether he will keep or replace the head of the agency, Deputy Secretary Mary Livers, who answers directly to the governor. Some in the juvenile justice system say Livers has done a good job with limited resources.

Others found more fault, saying she has failed to adequately build on the state’s reform efforts and that she has put too much emphasis on building prisons, which they say is not in the best interests of young offenders.

Livers declined several interview requests. Elizabeth Touchet-Morgan, her deputy, said she wouldn’t be available to speak to a reporter until the end of January, although the new governor — who takes office on Monday — is expected to announce his cabinet appointments before then.

Gina Womack, executive director of Families and Friends of Louisiana’s Incarcerated Children, said if her organization is able to work with the governor to find a replacement, she would like to see Livers go.

“It’s an opportunity and a fear,” Womack said. “We have an opportunity if she’s not going to stay to find someone who is actually really interested in fully implementing the reform and fighting for that, but there’s always that fear that it could be worse.”

George Steimel, a lobbyist with the Louisiana Criminal Defense Lawyers Association, also generally praised Livers. “A lot of people don’t really appreciate that office,” he said. “Livers, in my estimation, has done a decent job, considering the reduction in her budget over the last few years.”

“Since 2003, we cooperated with the Legislature and some advocates on massive juvenile justice reform,” Adams said, referring to the law that called for sweeping changes in the treatment of youth offenders, specifically moving from a custodial focus to a therapeutic focus. “I think the world of her.”

Livers simply wasn’t given the tools to succeed, said Adams, who also hopes she stays. “You’re operating on a mandate to provide alternatives when there is no money for alternatives,” he said.

While many agency observers want to see more money funneled to the agency, that could pose a challenge, given the state’s expected budget shortfalls for next fiscal year, currently projected at almost $2 billion.

Compared with 15 years ago, when the state agreed to settle civil rights lawsuits about appalling conditions at Louisiana’s youth prisons, the system is vastly improved. The number of juvenile delinquents sent into secure care has declined dramatically, from 3,089 juveniles in 2000 to just 542 in the third quarter of 2015, according to an Office of Juvenile Justice document .

Historically, much of the focus on fixing Louisiana’s juvenile system centered on the troubled secure facilities. Over the years, Louisiana officials have worked toward creating a system patterned after the highly-regarded “Missouri model,” emphasizing rehabilitation in staff-intensive, smaller settings spread out across the state to keep youth close to home. It’s supposed to be supported by a wide array of programs in the community and include engaging with an offender’s family.

In 2004, the OJJ, with the assistance of the architects of the Missouri system, designed LAMOD, a version tailored to Louisiana’s juvenile justice needs, Touchet-Morgan said.

“The program focuses on youth and staff interacting in small groups, involving the youths’ families and fostering positive peer culture,” Touchet-Morgan said. “LAMOD is best suited when delivered in a small regional facilities designed for treatment rather than traditional correctional standards.”

Most observers agree there have been great improvements over the years in how the secure facilities are run, at least when compared with the pervasive, serious dysfunction of more than a decade ago. But they also remain plagued with problems, from violence among youth to escapes to extreme staff turnover.

At Bridge City near New Orleans, a director was fired earlier this year amid allegations of hiring guards with criminal histories, including one who ended up accused in a fatal shooting at a mall last Christmas Eve. In December, the director for the past eight months, Basil C. Richards, said he was inexplicably forced out of his position at what he called “an incredibly troubled facility.” OJJ officials would not say if Richards was asked to leave or why he would have been.

In Baton Rouge, Livers in early 2014 closed down the secure facility in the middle of the night, shuttering Jetson Center for Youth near Baker with no warning. Youth were loaded onto buses and whisked to Swanson in Monroe.

There were allegations about violence at Jetson before the facility was closed, including an OJJ inquiry that found a guard moved at least one fight to a bathroom that didn’t have cameras to capture the altercation. While decrying that incident, which resulted in one boy having his jaw broken, Livers at the time said it was an aberration and not part of the reason Jetson was shuttered.

For Womack, so many of the problems can be ascribed to insufficient staff training. “There has been high turnover,” she said. “Enough care and concern weren’t put into hiring better staffing and enough staff.”

But others said a lot of the problems can be traced back to lack of money.

“We have a lot of youth we’re trying to accommodate,” said Curtis Nelson, a juvenile court prosecutor in East Baton Rouge. “When your youth outnumber your staff, you’re going to have what happened. That’s an unfortunate reality of not having enough dollars to put into more facilities.”

State funds for the Department of Youth Services have declined by nearly $50 million since Livers took office in the 2007-08 fiscal year, dropping from $162 million to $115 million in the 2015-16 fiscal year.

For some, a potential bright spot is a new secure facility taking shape to open in the summer, the Acadian Center for Youth in Bunkie. The new center will have 72 beds and be the first facility built specifically to implement a treatment-based secure care environment.

At the time they broke ground earlier this year, Livers, judges and other officials throughout the juvenile justice system heralded it as a key component to moving forward with the Missouri-based philosophy.

But even this new facility points to a philosophical divide. While some celebrated it as the state taking a step forward in its Missouri-based philosophy, critics said it showed Livers and the agency has been too focused on bricks and mortar and keeping kids in secure facilities instead of on other alternatives.

Perry said there is no need to offer more beds in secure care, as a majority of incarcerated juvenile offenders are there for nonviolent crimes.

“I want to see more youth in the community,” Perry said. “Juvenile prison is phenomenally expensive and by and large doesn’t work.”

Perry said he wants to see a better range of services to help young people reintegrate into society after stays in secure care, improved access to psychiatric treatment for youth with mental illnesses and non-secure placements that can provide a short-term respite for young people who need a temporary place to stay away from their families.

“Most places in Louisiana — including New Orleans, so it’s not just a rural phenomenon — lack this range of specialized options. That’s one of the contributing factors to too many youth being in custody,” he said.

Steimel said one area ripe for improvement would be in the educational offerings at the secure facilities. Only 8 percent of neglected, delinquent and at-risk youth juveniles were earning credits toward their high school diplomas in 2011, as outlined in a report by the Southern Education Foundation. The national average was 46 percent at the time, the report says.

In addition to beefing up services, Perry said he also wants the state to make an even more radical change to the juvenile system: moving the age at which a young offender is automatically charged as an adult from 17 to 18.

“(Teenagers) are not good at measuring risk and reward appropriately, and a 17-year-old doesn’t get to make any other adult decisions,” Perry said. “Then they are treated as adults in the criminal justice system, including life-long records. It’s not internally consistent, and it’s also really bad policy.”

Since Louisiana moved 15 years ago to overhaul a juvenile justice system notorious for its brutal treatment of youth, legislative victories an…