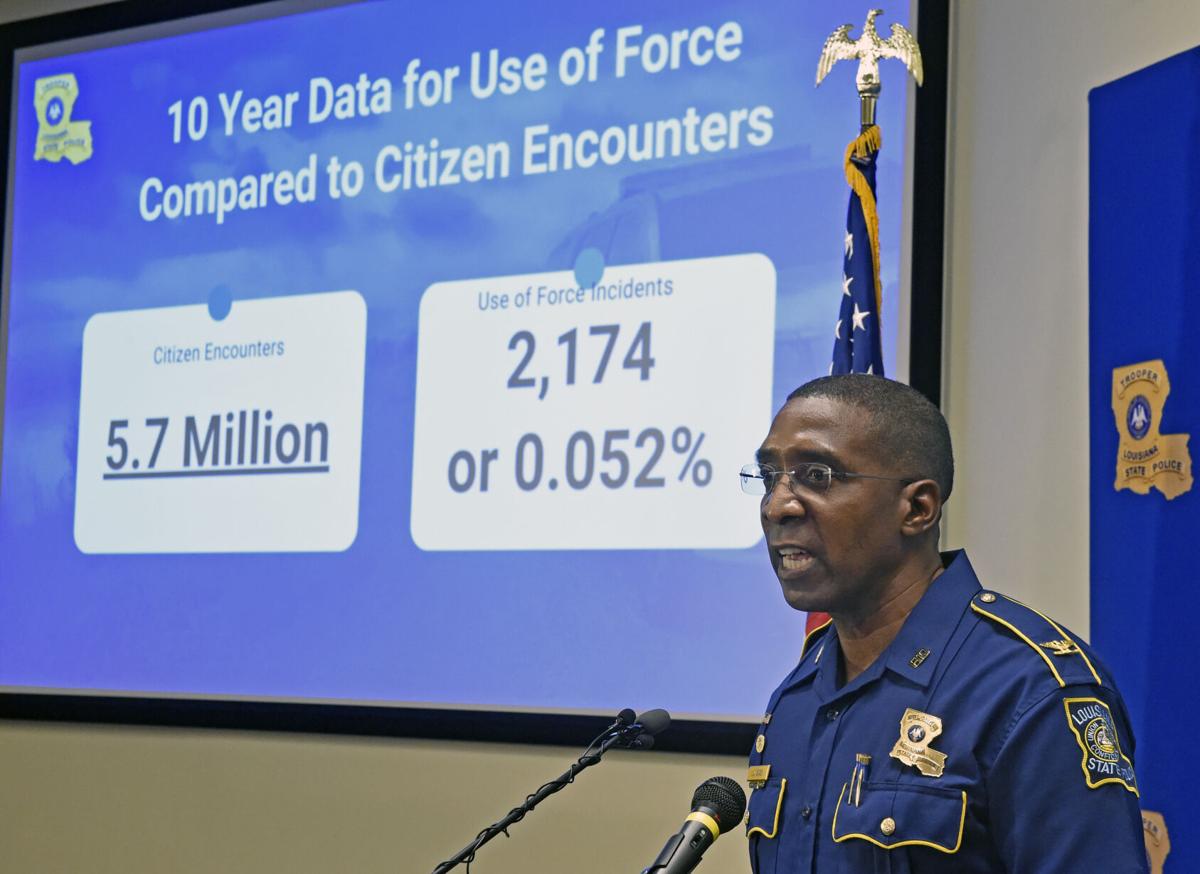 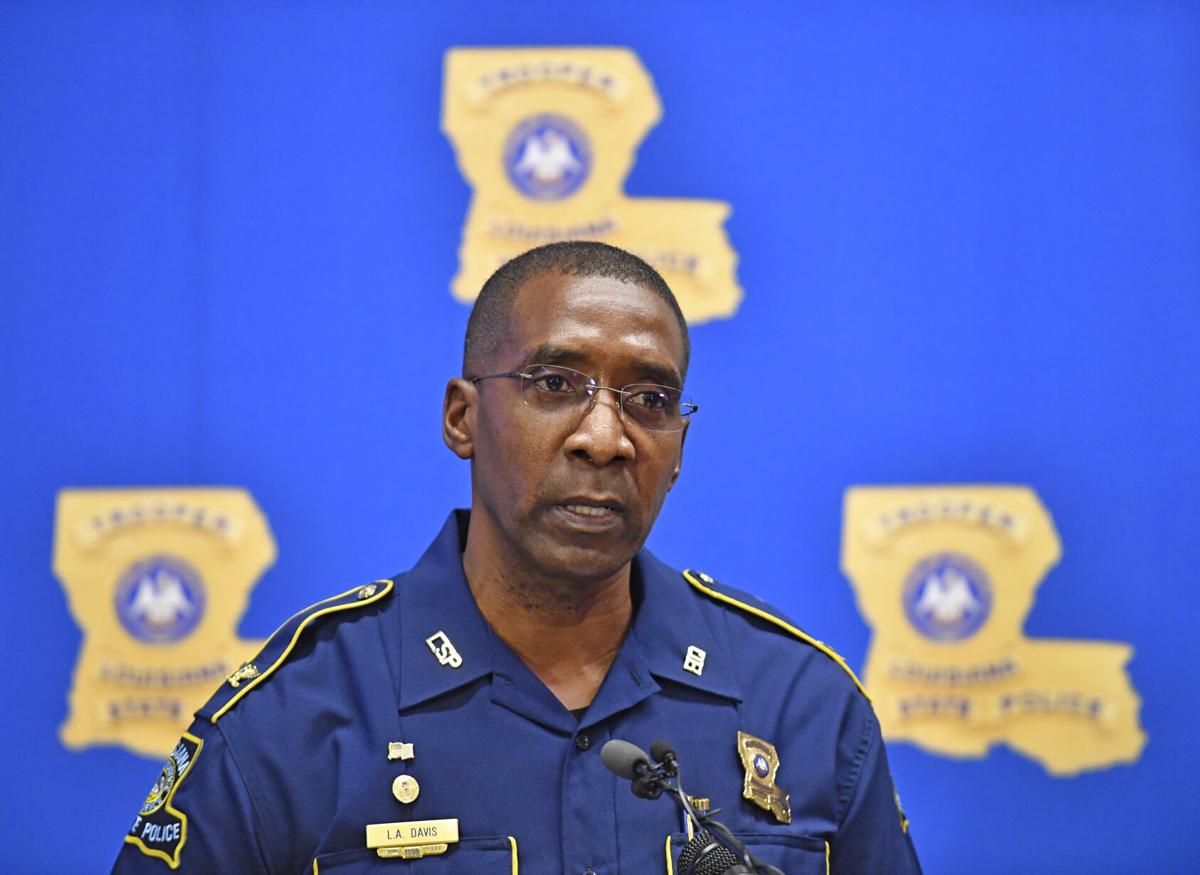 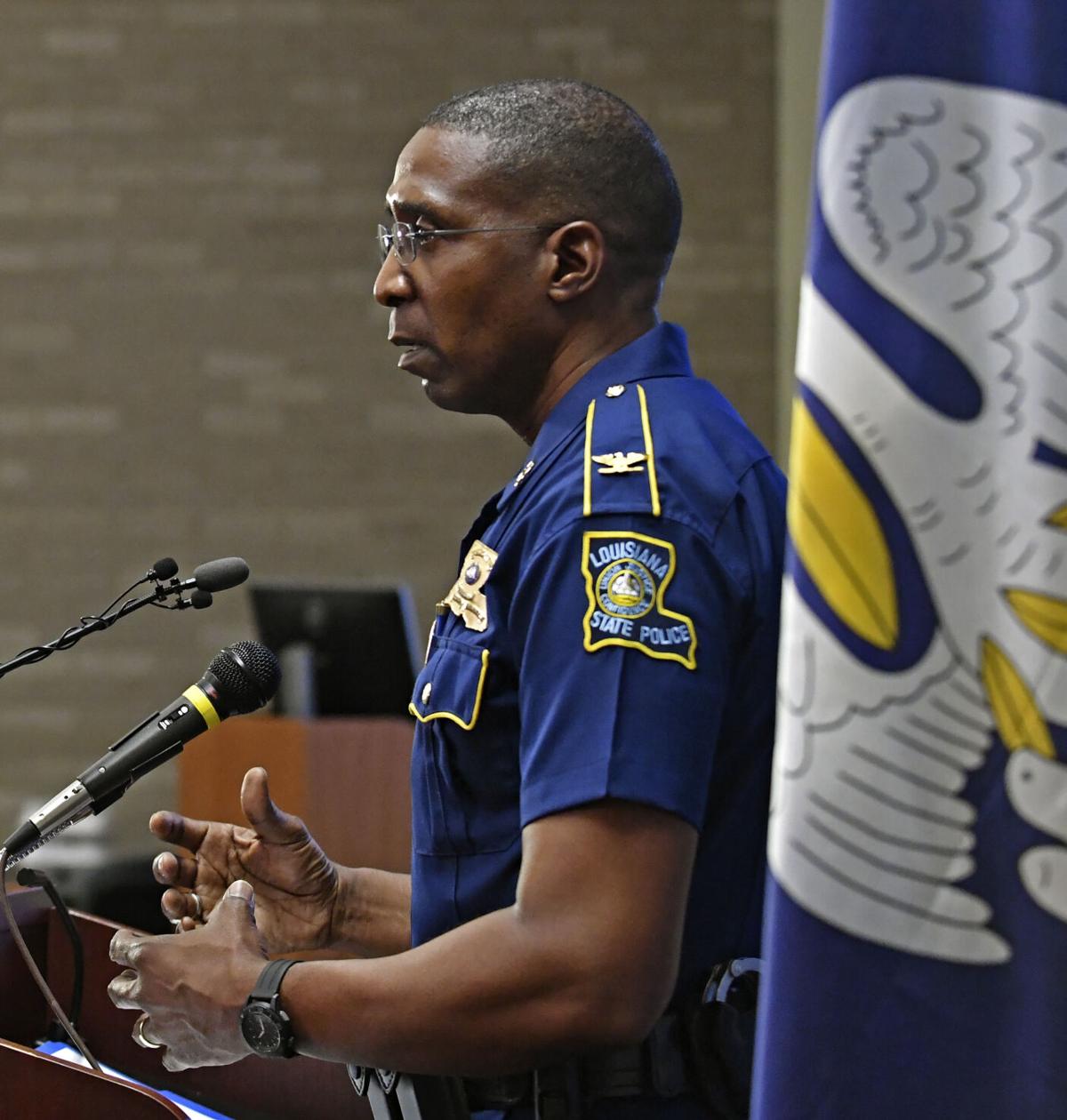 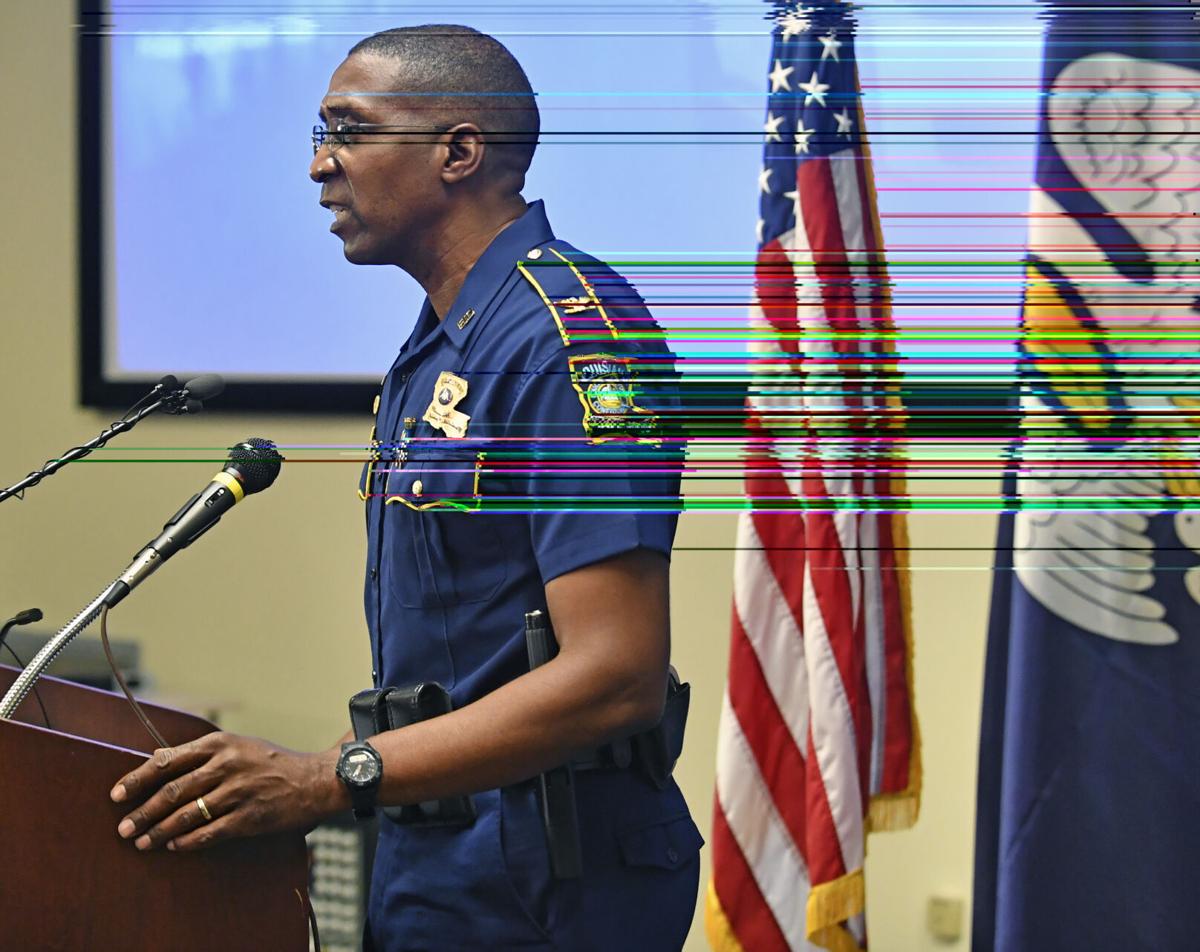 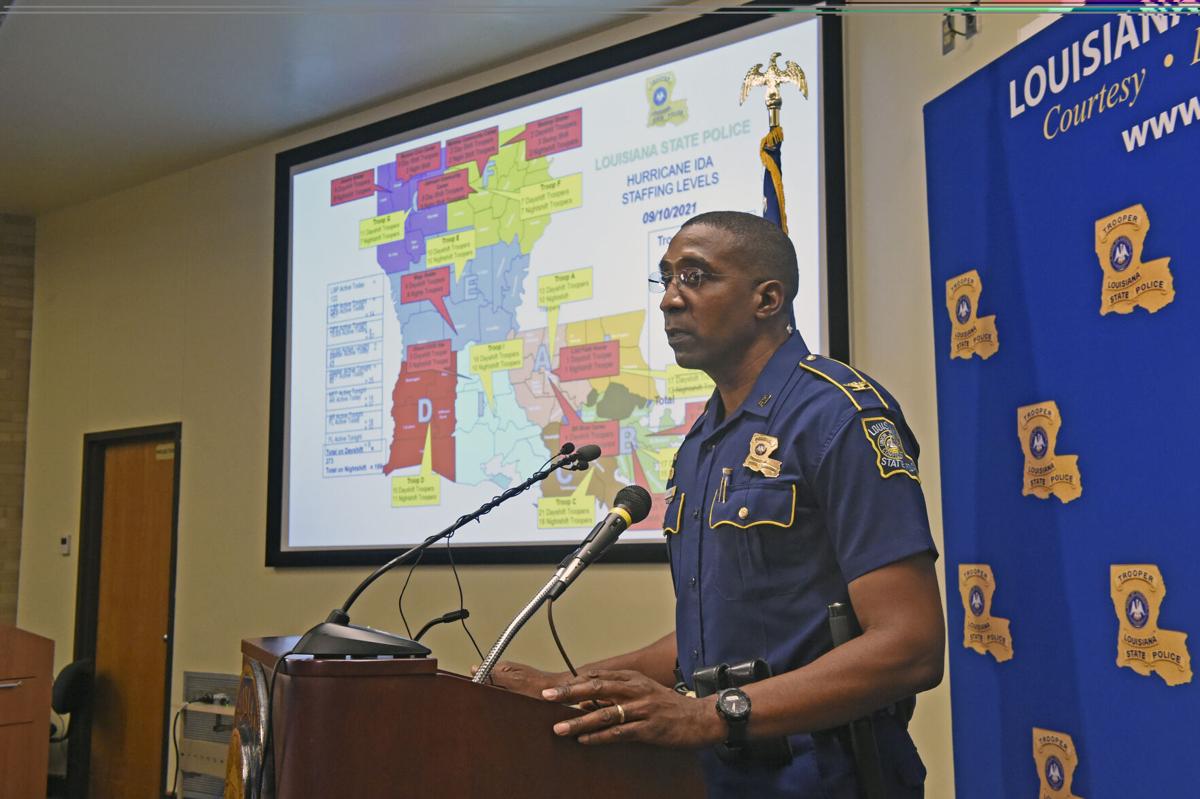 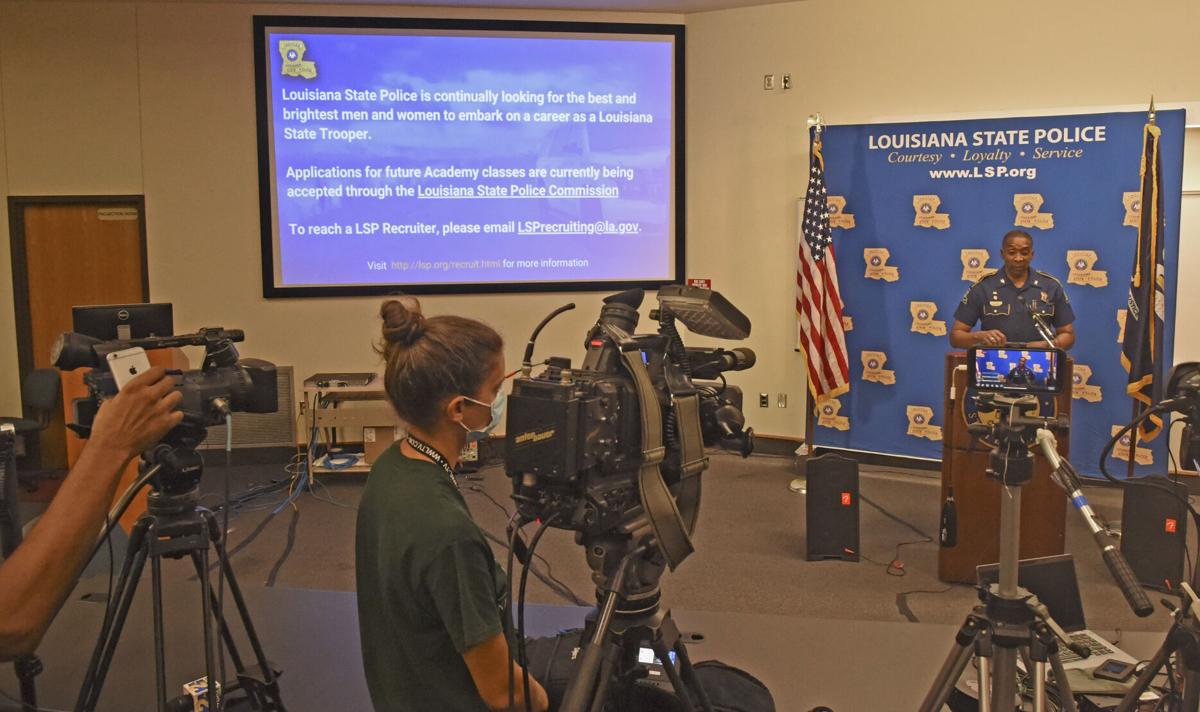 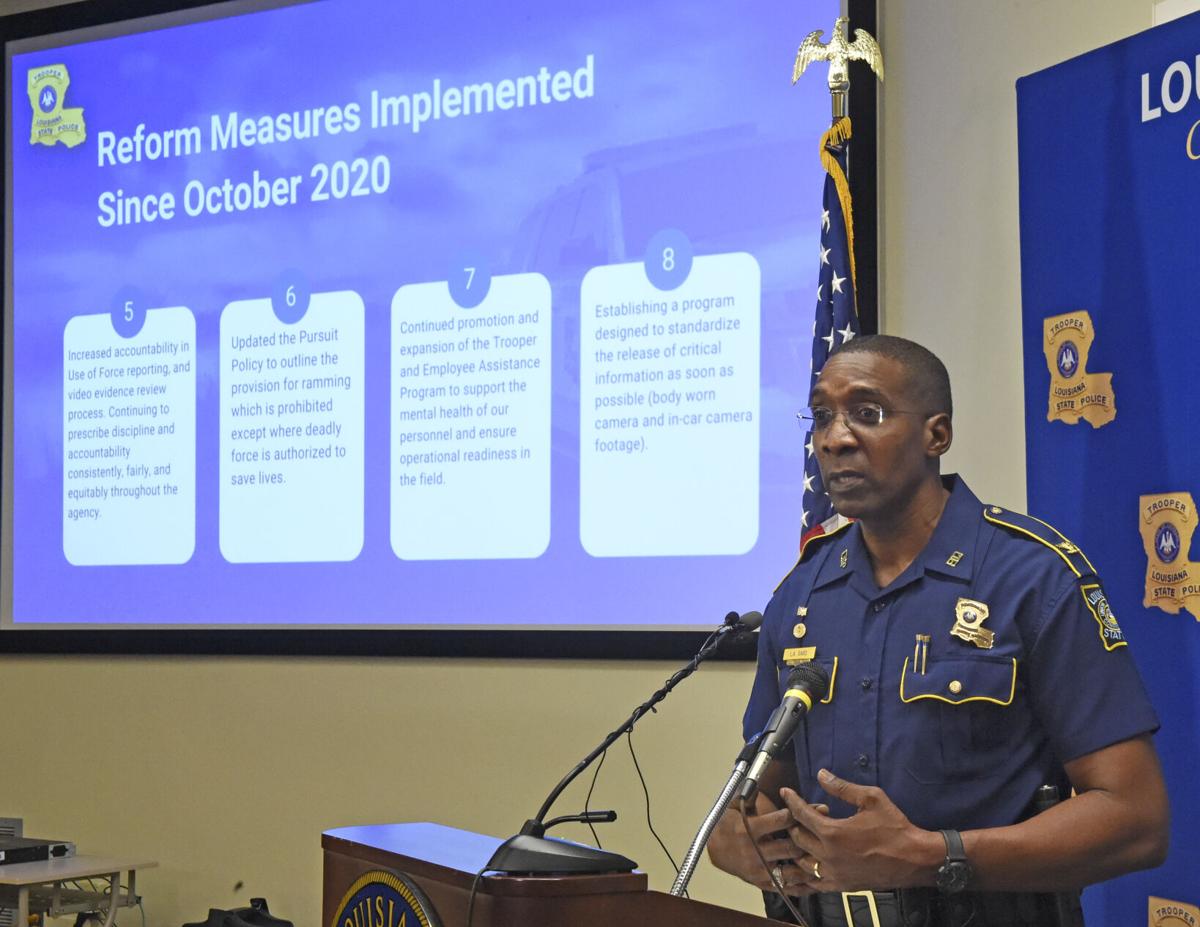 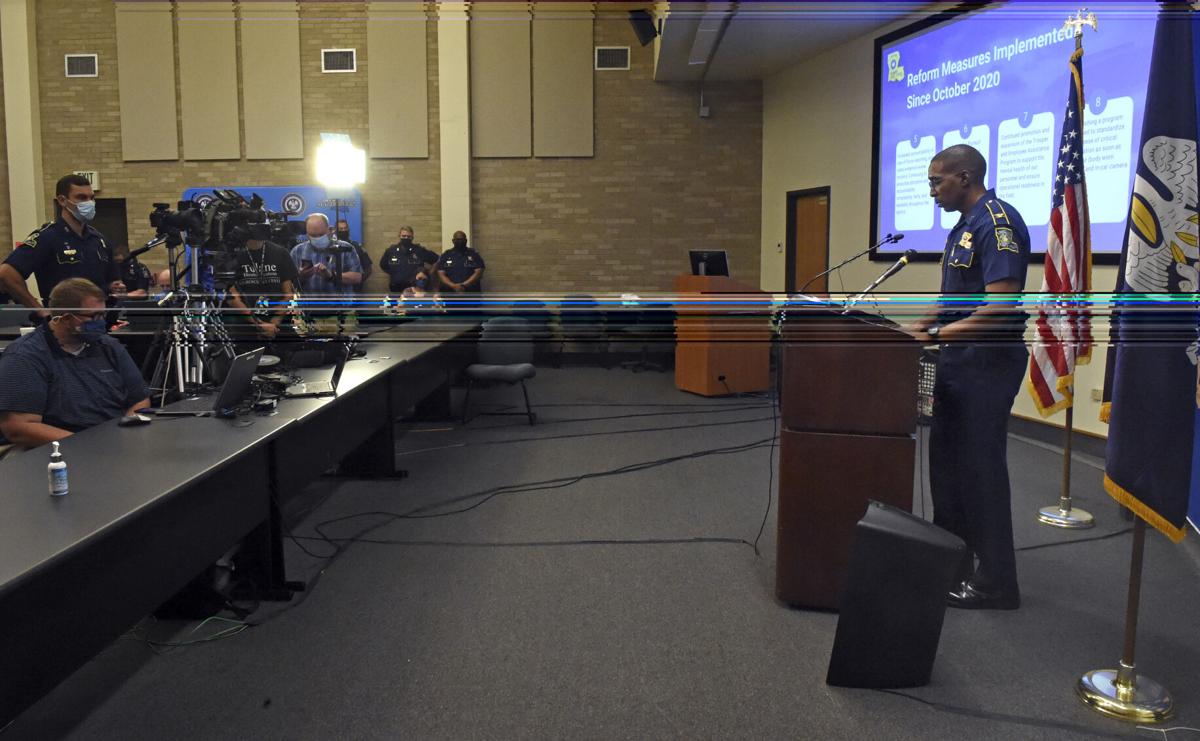 Facing mounting pressure for Department of Justice oversight and court-ordered reforms at Louisiana State Police, Col. Lamar Davis touted a number of changes already implemented at the embattled agency during a rambling press conference Friday afternoon, including a new specialized force investigation team that will probe in-custody deaths and shootings.

Davis sketched out the new unit and other measures he said State Police are taking as he defended his administration in the wake of recent media reports on its handling of alleged excessive-force incidents involving a group of Monroe-area troopers and Black motorists — and mounting criticism over a lack of transparency.

An Associated Press report this week highlighted a series of violent incidents caught on body-camera videos that were lost or ignored for years by State Police higher-ups.

In the case of Ronald Greene, the Black motorist who died in a violent altercation with troopers on a Union Parish roadway in May 2019, Davis attempted to explain a lack of discipline handed to the ranking officer at the scene, Lt. John Clary, who was accused of withholding his bodycam video. Davis said there wasn't enough evidence that the omission was intentional, while insisting on his commitment to reform and pledging to hold troopers accountable all the way up the chain of command.

"I do not condone any form of excessive force," Davis said. "Nor will I tolerate this type of behavior in my agency."

Meanwhile, calls for a so-called "pattern or practice" investigation are getting louder, with U.S. Rep. Troy Carter on Friday becoming the latest lawmaker to demand such a probe of State Police. Such investigations typically spur reforms through a consent decree and long-term supervision by a federal judge.

In presenting a host of reforms — some that mirror changes enacted in other cities placed under consent decree — Davis seemed to be making the case for why federal oversight isn't necessary for his agency. He made a similar statement to the AP earlier this week.

However, his speech Friday veered into long explanations of procedural and administrative rules to illustrate why sometimes State Police leaders can't be as transparent or decisive as they would like with troopers accused of misconduct. He claimed the agency often can't release bodycam footage during an investigation because it could jeopardize prosecutions, though he failed to explain any detrimental effects from leaked videos in the Greene case.

After some videos of Greene's arrest were leaked earlier this year, State Police decided to release the rest of the footage voluntarily.

During the news conference, Davis softened his stance on potential federal oversight: "With regards to the Justice Department, if they decide that they're going to come in and assess us on that then I welcome it," he said.

LSP says 67% of its uses of force in recent years have targeted Black people — double the percentage of the state's Black population.

Minutes after the news conference wrapped up, state Rep. Ted James, D-Baton Rouge, chairman of the Legislative Black Caucus, panned the hourlong presentation, saying it did nothing to quell concerns.

"I think they're recognizing the heat is on. And I think this was an attempt to try to water down some of what is going to be coming, what has come and what is set to come from the Legislature," James said.

"I respect Col. Davis, but on this one, I see it different," Fields said. "I hope the federal government would have their watchful eye on State Police. Some of these guys are acting as though they answer to no one.

"Don't hide behind some administrative rules. No, that's a bunch of hogwash. At the end of the day, if you're an officer for State Police and you hid evidence, you need to be held accountable," Fields said, referencing Clary and other supervisors he believes were involved in the coverup.

Davis was appointed to take the helm of State Police last fall after his predecessor, Col. Kevin Reeves — a former commander of Monroe-based Troop F, the unit at the center of the present controversy — stepped down as the scandal widened. A federal criminal investigation is ongoing, focused on alleged civil rights abuses by Monroe-based troopers in several instances against Black motorists.

The investigation started after the Greene family filed a lawsuit last year accusing State Police of beating Greene to death and covering up their actions, initially claiming he died in a car crash following a high-speed chase.

The recent AP story asserted a pattern of violence kept shrouded in secrecy. According to agency data, 67% of its uses of force in recent years have targeted Black people — double the percentage of Louisiana's Black population.

Davis said during the press conference that he was concerned about the numbers and doing his best to make real changes in how some troopers interact with the public.

The AP found troopers habitually turned off or muting body cameras during pursuits and sometimes omitted uses of force from official reports. When footage is recorded, the agency routinely refuses to release it.

Davis presented a long list of recently implemented reforms: a more stringent and organized process requiring supervisors to routinely review bodycam footage of their subordinates; putting troopers through implicit bias training; revisiting the policy on when to release bodycam footage; and strengthening rules against excessive force, including banning the use of impact weapons to the head and neck.

Davis also pledged his commitment to making State Police more diverse. That has been a particular problem at Troop F, where just 9% of troopers are Black, records show.

"The ultimate goal is to save lives," he said. "We are better than we were yesterday, and we will be better tomorrow than we are today. We're committed to changing."

James said many of the reforms Davis described followed a resolution the Legislature passed in June that asked the State Police Commission to adopt changes put into state law this year for other policing agencies. Among them are a requirement for anti-bias training and policies for body-worn and dashboard cameras.

Behind the name: Ronald Greene, brutalized by police, remembered as 'a doer' with 'beautiful heart'

Black state lawmakers on Tuesday called on the U.S. Department of Justice to conduct a full investigation into “systemic violations of constit…