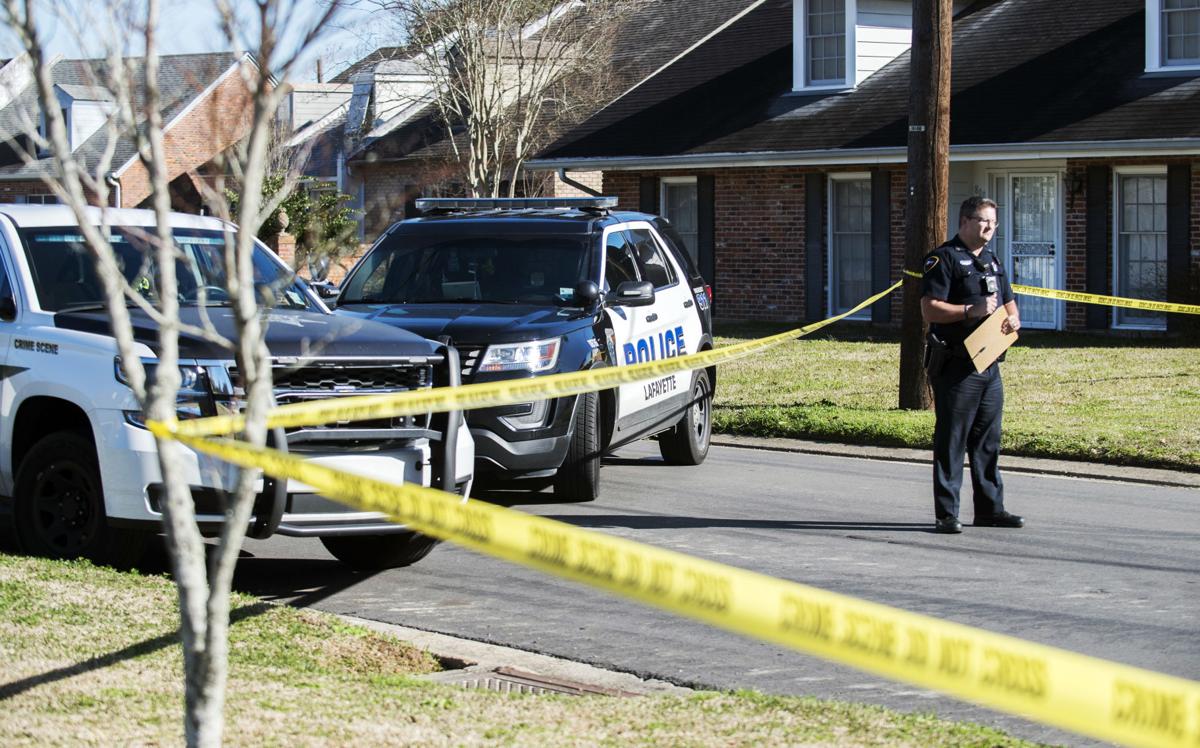 Lafayette Police investigate the scene of a shooting at a home in the 700 block of White Oak Drive Friday, February 7, 2020, in Lafayette, La. 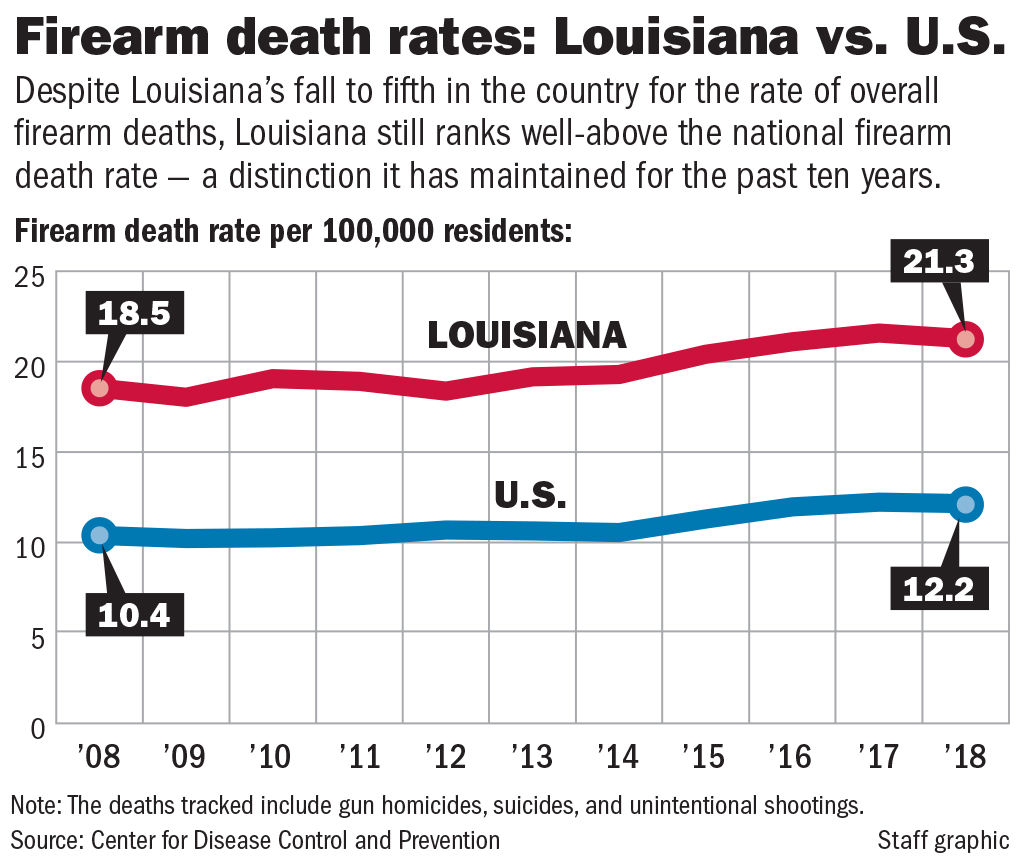 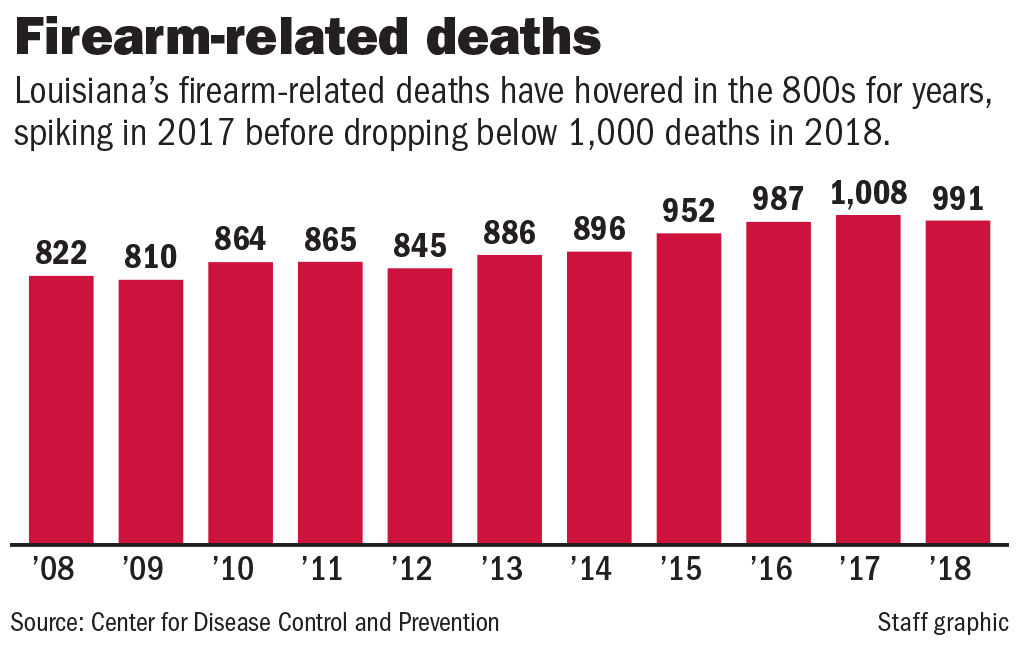 Louisiana has dropped to fifth in the nation for the state's rate of gun-related deaths — down from fourth last year, according to new data from the U.S. Centers for Disease Control and Prevention.

Last year's ranking of fourth in the nation, while still within the top five, was a better position than the state has held in some time. For years, Louisiana hovered in the top two spots, finally dropping to third in 2016.

Louisiana now ranks behind Missouri and in front of Alaska for its gun deaths rate, while Mississippi and Alabama rank one and two in the nation for gun deaths, respectively.

But, according to Peter Scharf, a crime expert at the Louisiana State University School of Public Health, people shouldn't be so quick to celebrate the apparent drop.

"It may be a little premature to 'hurrah,'” Scharf said.

From the way gun deaths are counted and investigated nationally to the homicide number decreases among the state's largest cities, the rate could be attributed to many things, none of which spell out a clear understanding of what the newest data could mean for Louisiana.

The state's rate of gun deaths has also remained relatively steady, continuing on a slow uptick across the decade with the occasional fluctuations.

Louisiana’s firearm-related deaths have hovered in the 800s for years, spiking in 2017 at 1,008 before dropping below 1,000 deaths in 2018. In other words, Louisiana's gun deaths, by the raw numbers, are generally increasing — though they are doing so in slight increments that sometimes oscillate between years.

Scharf emphasized that the information provided by the CDC only measures reported deaths rather than actual deaths. Furthermore, between states — not to mention between local jurisdictions — there may be a difference in how these deaths are measured, investigated and classified.

"If you don't count it, you can't rate it," Scharf said. "The data is colored because of differential counting and differential investigations."

Scharf explained that a national registry of shootings would ensure every single state counts gun deaths in the same way, allowing for consistent data that might provide a more complete picture of gun violence in the country.

Scharf also pointed out that the change of homicide rates in a few cities can drastically alter a state's ranking; the rank itself has little to do with the gun violence in other, more rural parishes. Homicides in New Orleans, for instance, were down in 2018, and decreased again in 2019, which Scharf said may further depress the state rate.

"The state rate is an illusion," Scharf said. "It's really a series of cities that are more or less effective at controlling gun violence. New Orleans statistically wipes out the rest of the state. As long as New Orleans was going to the sky...the state rate was going crazy."

The states with the lowest gun death rates in 2018 were Rhode Island, Massachusetts, Hawaii, New York and New Jersey.

Scharf said that, whether the numbers available now are close to accurate or not, the gun violence outlook for the state is uncertain at best.

"No matter how you look at it, it's still damn scary," he said.

On the morning of Jan. 25, a 3-year-old boy found an unsecured and loaded gun in his home on Birch Street. He fired one shot, which struck him…