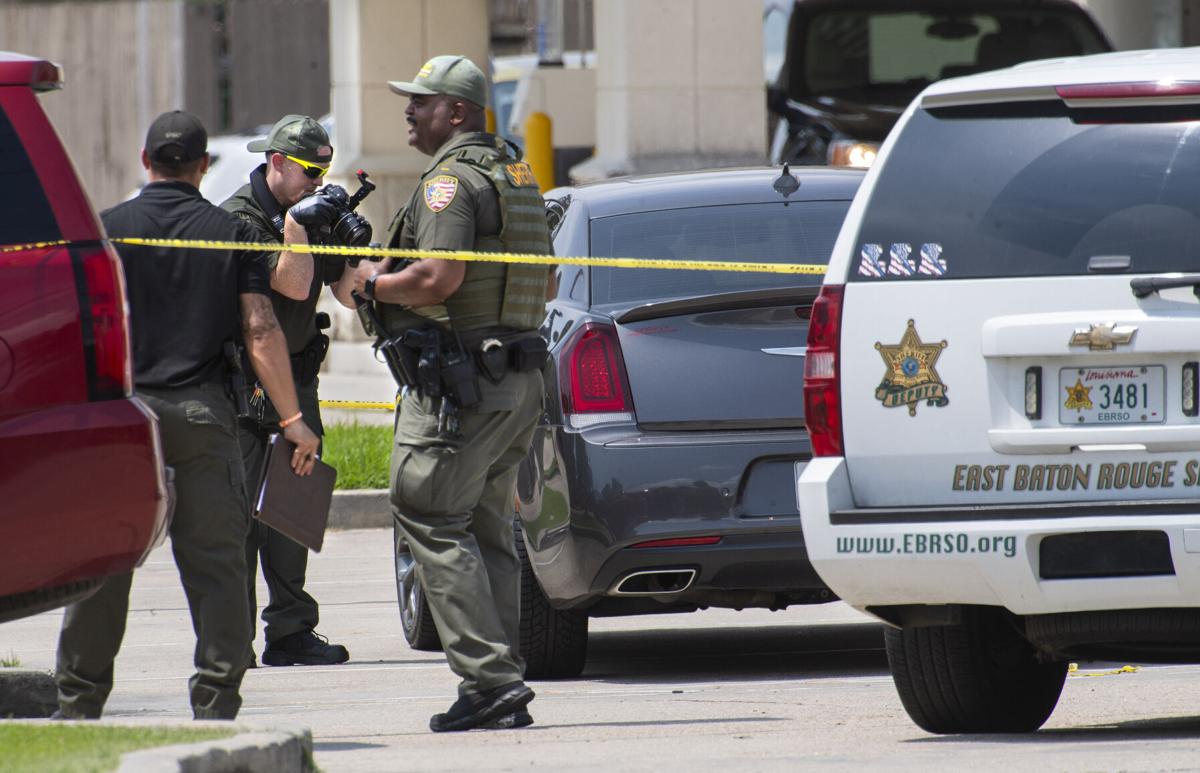 East Baton Rouge Sheriff's Dept. deputies and investigators photograph and look at a Chrysler sedan in a parking lot near the Bluebonnet Crossing shopping center and a CVS Pharmacy on Jefferson Highway, Sunday morning, August 1, 2021. A suspect led law enforcement on a chase before being taken into custody near the CVS, officials said. It started with a domestic incident shortly before 9 a.m. at a home on John Newcombe Avenue, in the Wimbledon Esates subdivision, where one person was killed and another was wounded in a suspected stabbing, East Baton Rouge Sheriff spokeswoman Casey Rayborn Hicks said. 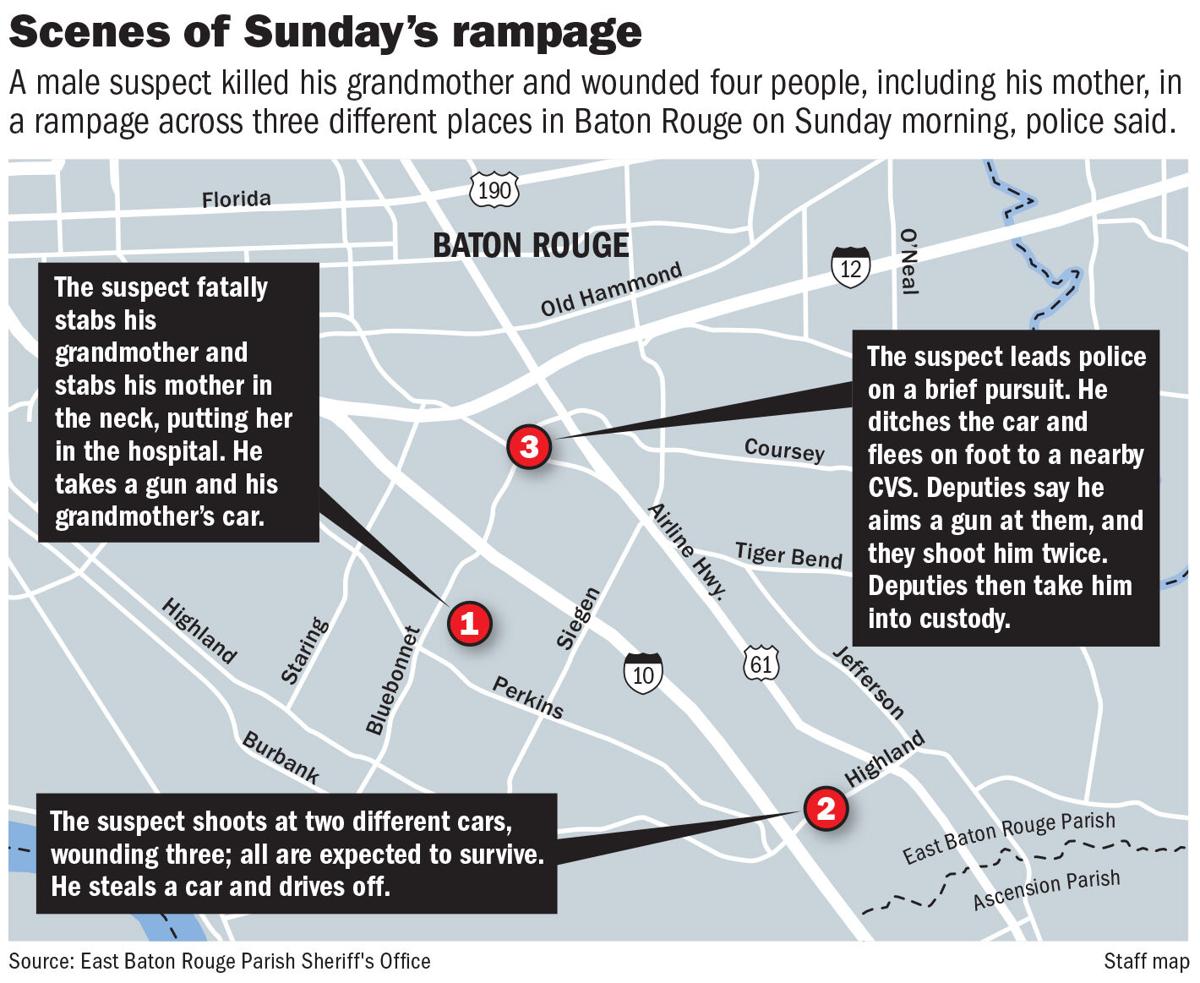 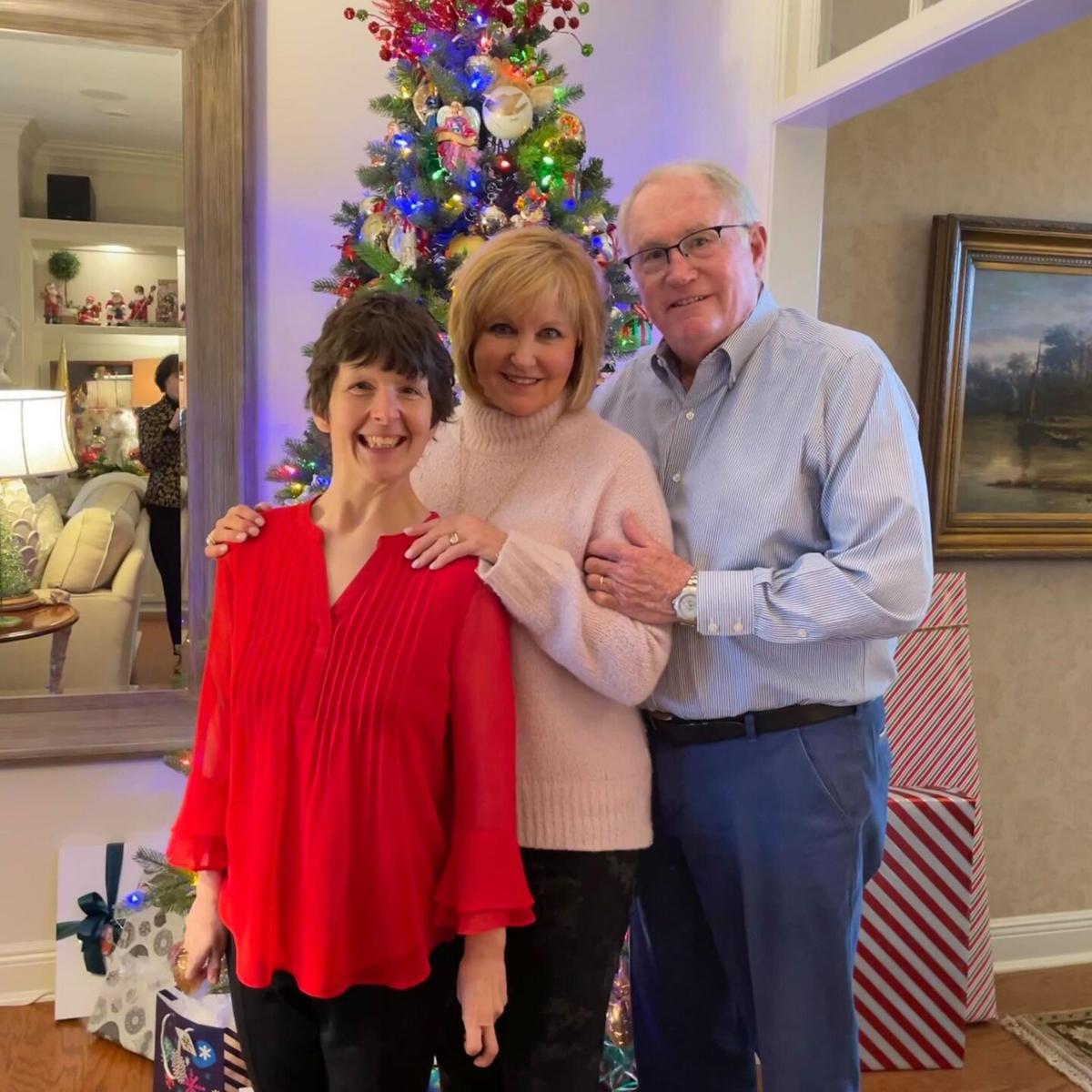 A recent photo of Rachel Tullos and her parents, Debbie and Vandy Tullos.

After a big family celebration Saturday night, Debbie and Rachel Tullos had an important errand to run Sunday morning: getting a negative COVID test that would allow Rachel to return to school in Tennessee the following day.

The mother and daughter headed to an Ochsner urgent care center off Highland Road and reserved their place in line, then decided to wait in the car, family member Randy Rice said Monday. One minute they were cranking the air conditioning against the Louisiana summer heat and simply killing time, keeping each other company — and the next they were fighting for their lives, unable to escape the hail of bullets piercing their vehicle.

There in that parking lot, two generations of Tullos women crossed paths with Aaron Morgan, 28, a stranger to them. He had already stabbed his grandmother to death and seriously injured his mother before fleeing the scene, according to law enforcement.

Officials said Morgan was trying to carjack the women, then shot and wounded another driver parked behind them. Moments later, he discovered an SUV someone had left unlocked and running.

Morgan took off in the SUV and led law enforcement on a pursuit that crisscrossed south Baton Rouge, ending near a CVS at Bluebonnet Boulevard and Jefferson Highway, where deputies shot him twice and took him into custody. Morgan is recovering from the gunshot wounds and will be booked into jail after his discharge from the hospital, officials said.

Just minutes before the parking lot shooting, Debbie had complained about the subpar coffee she was drinking, so her husband offered to bring her another cup while she waited with Rachel, their adult daughter, Rice said. Rachel, who has autism, spends most of her time at a special school in Tennessee, which requires negative COVID tests for residents returning from travel.

She was shot in the shoulder — a bullet remains lodged in her collarbone — while Debbie was struck in the face. One bullet ripped through her mouth and another grazed her head, Rice said.

Miraculously, both are expected to make a full recovery. Rice said the family has consistently gotten good news since the initial tragedy upended their lives Sunday morning. He said neither victim ended up with brain damage, though Debbie will likely need significant surgery. Rachel escaped serious injuries to her respiratory system, which the doctor called a miracle.

"We feel like God put his hand in front of the bullets and deflected them, because another inch or two would have been tragic," Rice said. "They're not out of the woods yet, but overall very blessed and fortunate."

Because the shooting unfolded outside a medical clinic, all three victims received almost instantaneous attention from doctors and nurses who ran outside to render aid. Rice described them as a godsend, and even the mayor commended their actions.

Rice said the incident delivered a stark reminder that life is filled with both hardship and hope.

"My niece Rachel is the epitome of innocence," he said. "She would never hurt a fly, and yet she was targeted like this."

He said Debbie has a passion for life that even now radiates from her hospital bed. Just 24 hours after the shooting, she was gesturing around the room to communicate with her husband and keep everything in order. Both mother and daughter have been asking after each other often, inquiring from their respective hospital rooms — "these innocent people, two beautiful souls," Rice said.

The doctors are hopeful Rachel will be able to come home in a few days, he said, while Debbie will likely remain hospitalized longer.

A man stabbed his grandmother to death and injured his mother Sunday morning, starting a rampage that crisscrossed south Baton Rouge, left thr…

Morgan has almost no criminal history in East Baton Rouge. His only prior arrest was in 2011 when he confessed to spray painting a slang term for marijuana on a bus at the Life Tabernacle Church in Central. That was just months before he graduated from Central High School, records show.

Social media posts show that Morgan suffered a serious motorcycle accident in 2012 that left him in critical condition. He was hospitalized for months in Colorado before returning home to Baton Rouge, his family had written on a Facebook page that was later taken down.

A few new details emerged Monday about the series of events Sunday morning. Morgan had been living with his grandmother, Dianne Gafford, for about two months at her home in the Wimbledon Estates neighborhood off Perkins Road, officials said.

Investigators say that, after stabbing her to death and wounding his mother, Morgan took a gun and car belonging to his grandmother and drove to the shopping center off Highland Road where he shot the three victims and fled in the stolen SUV.

He ditched the SUV in a strip mall parking lot on Bluebonnet Boulevard, then shot at another motorist who was uninjured, officials said. Morgan ran around behind the row of businesses and tried to break into a nearby apartment, according to Casey Rayborn Hicks, spokeswoman for the East Baton Rouge sheriff. When that was unsuccessful, he hid behind a tree and pointed his gun at deputies, who shot him twice and took him into custody.

Officials declined to provide a timeline on when Morgan will likely be booked into jail.

A Baton Rouge grandmother whose grandson killed her during a violent rampage Sunday morning was found with multiple stab wounds, severe bruisi…