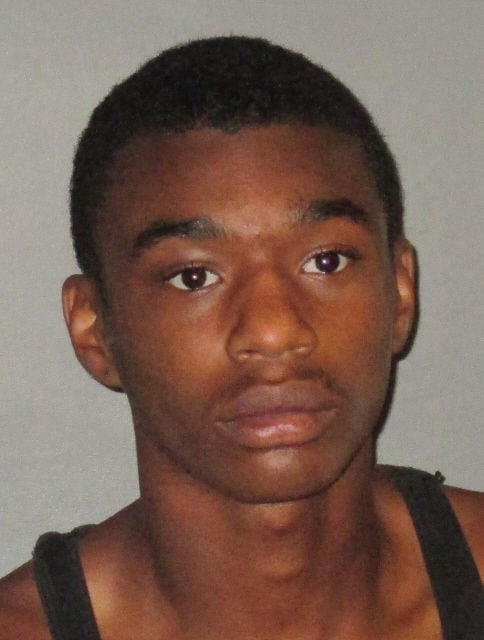 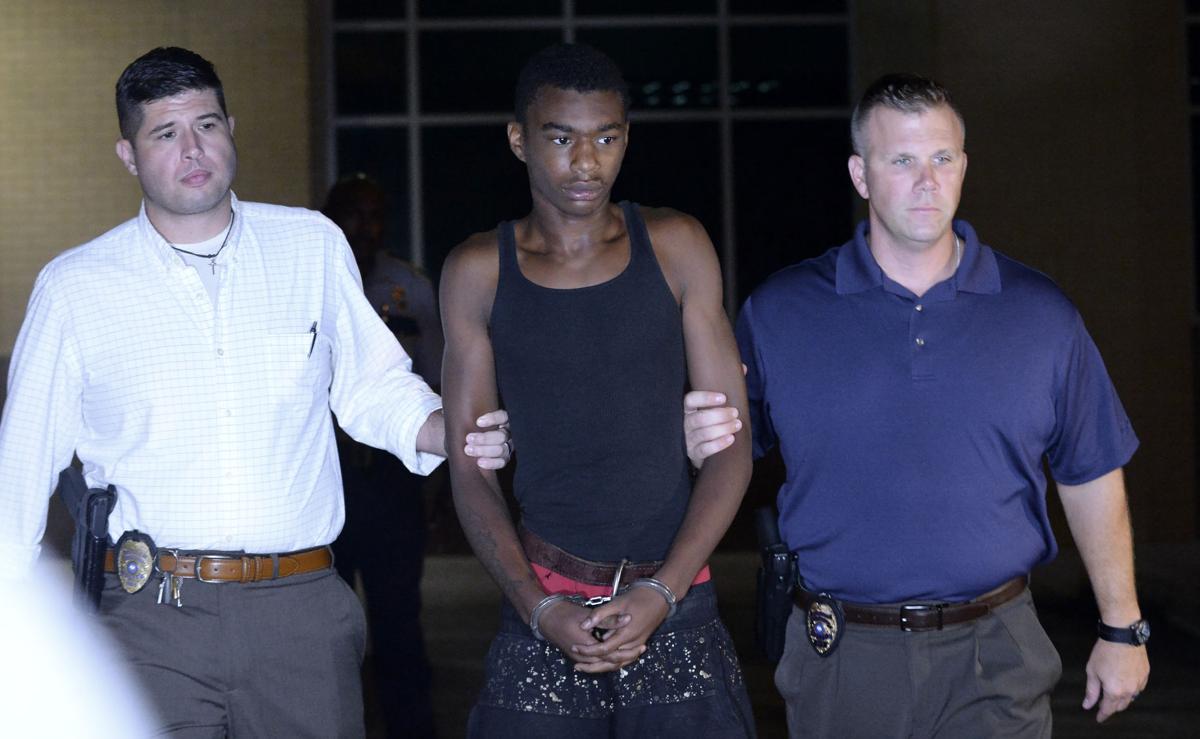 Baton Rouge Police Detective Logan Collins, left, and Detective Bryan Ballard, right, escort Landry Carter, 18, from the violent crimes unit late Wednesday night, August 9, 2017, in Baton Rouge, La. Carter was arrested in the murder of Keith Odom, a trucker from Tennessee, was shot and killed after being robbed of his belongings. Carter is also being charged with three counts of armed robbery in connection to three armed robberies that occurred June 11, June 14, and July 3 of this year.

Baton Rouge Police Detective Logan Collins, left, and Detective Bryan Ballard, right, escort Landry Carter, 18, from the violent crimes unit late Wednesday night, August 9, 2017, in Baton Rouge, La. Carter was arrested in the murder of Keith Odom, a trucker from Tennessee, was shot and killed after being robbed of his belongings. Carter is also being charged with three counts of armed robbery in connection to three armed robberies that occurred June 11, June 14, and July 3 of this year.

The Baton Rouge teen arrested in the Tuesday morning armed robbery and shooting death of a Tennessee truck driver is also accused in a string of nighttime armed robberies in the past two months and all within a mile of his home.

Landry Carter, 18, was first linked to the killing on Tuesday, the same day Keith Odom was fatally shot while repairing a tire on his 18-wheeler at 7:53 a.m. in the Longbow shopping center parking lot on Florida Boulevard, according to Baton Rouge police.

Police also linked the teen to three armed robberies at two dollar stores, one in the same shopping center as the killing and two at another store down Florida Boulevard. All were committed about 9 p.m., near closing time for the stores.

"He knew the area, he knew the ins and outs, to where he could retreat," Baton Rouge Police spokesman Sgt. L'Jean McKneely said.

Carter's address is also within a mile — though across Florida Boulevard — of the four armed robberies. A woman at the 11726 Tams Drive home said Thursday the family had no comment.

On Tuesday, Carter pulled out a handgun, demanding Odom’s property, according to an arrest report. After Odom turned over his valuables to Carter, the teen "took a step back and fired a single shot at the victim," the report says. Odom was shot in the midsection and was pronounced dead later at a hospital.

Investigators obtained surveillance video from a nearby business allegedly showing Carter walking toward the truck.

Once detectives had obtained the identity and photo of Carter in the homicide investigation, the victims from the different armed robberies were brought in to the Police Department to view a six-person photographic line-up. In all three cases, the victims immediately identified Carter's photo as the person who committed the armed robberies, the reports say.

"I believe they were more willing to come forward because of the nature of events," McKneely said.

A witness to the shooting death told The Advocate on Thursday he was standing only 10 feet from the men. The witness said he had just gotten a job from a nearby staffing agency and was walking across the parking lot to his job site.

“When it happened I was kind of shocked,” he said. “When I saw the fear of death in (Odom's) eyes … I started screaming and running after the guy.”

The witness, an Army veteran, said he wanted to take down the shooter, but ultimately decided to return to the victim; another bystander was already administering first aid.

The witness told police the assailant was wearing a black hoodie and carrying a black backpack with white markings, and told officers which way he ran, according to the police report.

Carter's crime spree apparently began on June 11, when he robbed the Family Dollar at 12132 Florida Blvd about 9 p.m., according to the arrest report. He left with about $240 in cash, two packs of cigarettes and two cigars.

Three days later, also about 9 p.m., Carter robbed the Dollar General at 191 Little John Drive, police say. A cashier told The Advocate on Thursday that the robber walked around the store before taking a cold drink from a front cooler. He then went to the front counter as though he were about to purchase the drink, but instead produced a black semi-automatic handgun and demanded money.

Carter returned to that store on July 3, again about 9 p.m., when the same cashier was working and committed a very similar robbery, according to both the cashier and an arrest report. Between the two robberies, police said, Carter hauled off $530 in cash.

The cashier, who declined to give his name, said the robber was very calm in both robberies. During the July robbery, the customers in the store didn’t even realize what happened until the assailant left and the cashier asked the customers to leave.

“The way that he acted wasn’t ever aggressive … but there’s no nice way to have a robbery,” the cashier told The Advocate.

He said he recognized the man as the same robber just before the second incident, but was unable to call police in time. Asked about the fatal shooting and the arrest of Carter, the cashier said, “There’s no real words. It’s crazy the fact that someone could kill someone for no apparent reason. … It could’ve been me.”

Sarah Simmerman, the commercial manager at  Advance Auto Parts next to the killing site, saw Odom buying a tire repair kit in the store just minutes before he was killed. She said she is most shaken up by the fact that Odom gave over his belongings and was still killed.

“He came in here. He seemed like a nice enough guy,” Simmerman said. “He was excited about fixing his tire and going home to his family.”

"It was a working man, he was performing his job and duties," McKneely said. "… even though every shooting is a tragic incident …this one here was completely random."

Carter was booked Wednesday night into Parish Prison on a count of first-degree murder and armed robbery in Odom's shooting death, as well as three other counts of armed robbery.

Carter is being held without bail on the first-degree murder count. His bail was set Thursday at $400,000 on the armed robbery counts, according to East Baton Rouge Clerk of Court records.

Police are continuing to investigate, McKneely said, and Carter could be linked to more incidents, or other people may have been involved.

"The place they rob, the people they rob … they'll do that until they get caught," McKneely said.

It's hard to believe that it has been more than a month since we lost our beloved son, Keith Odom. He was the trucker from Tennessee who was r…