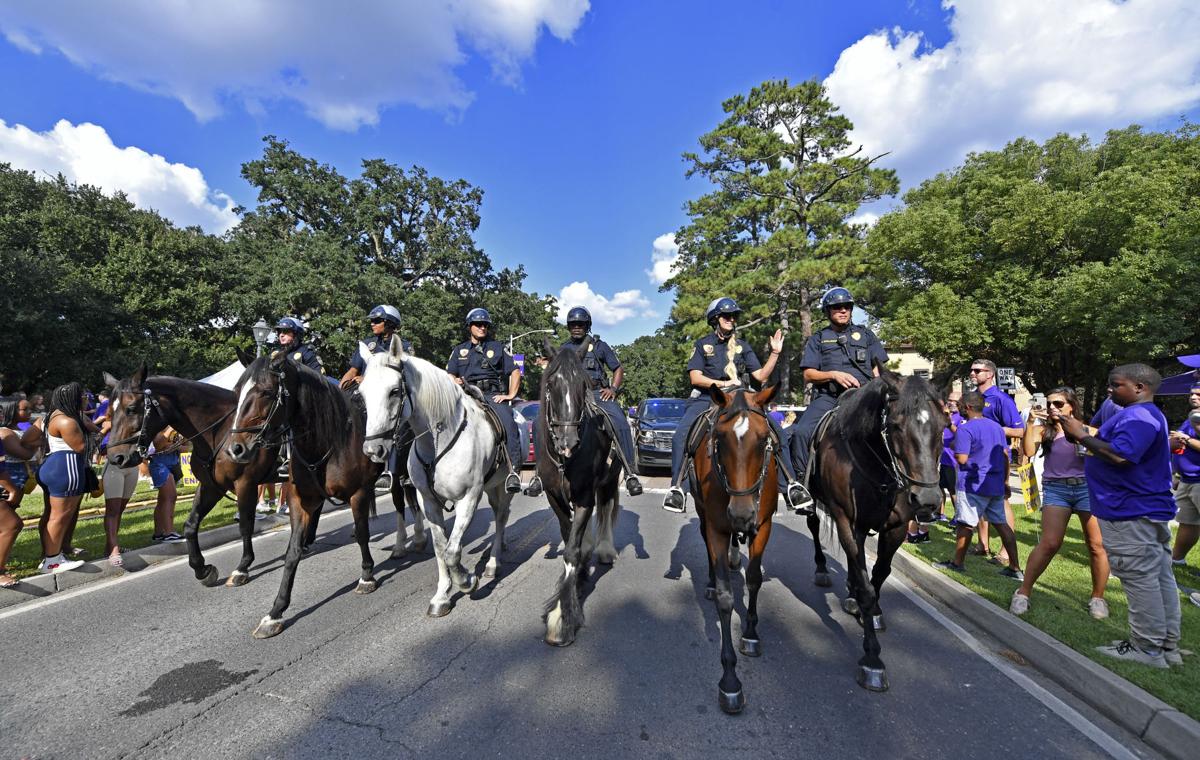 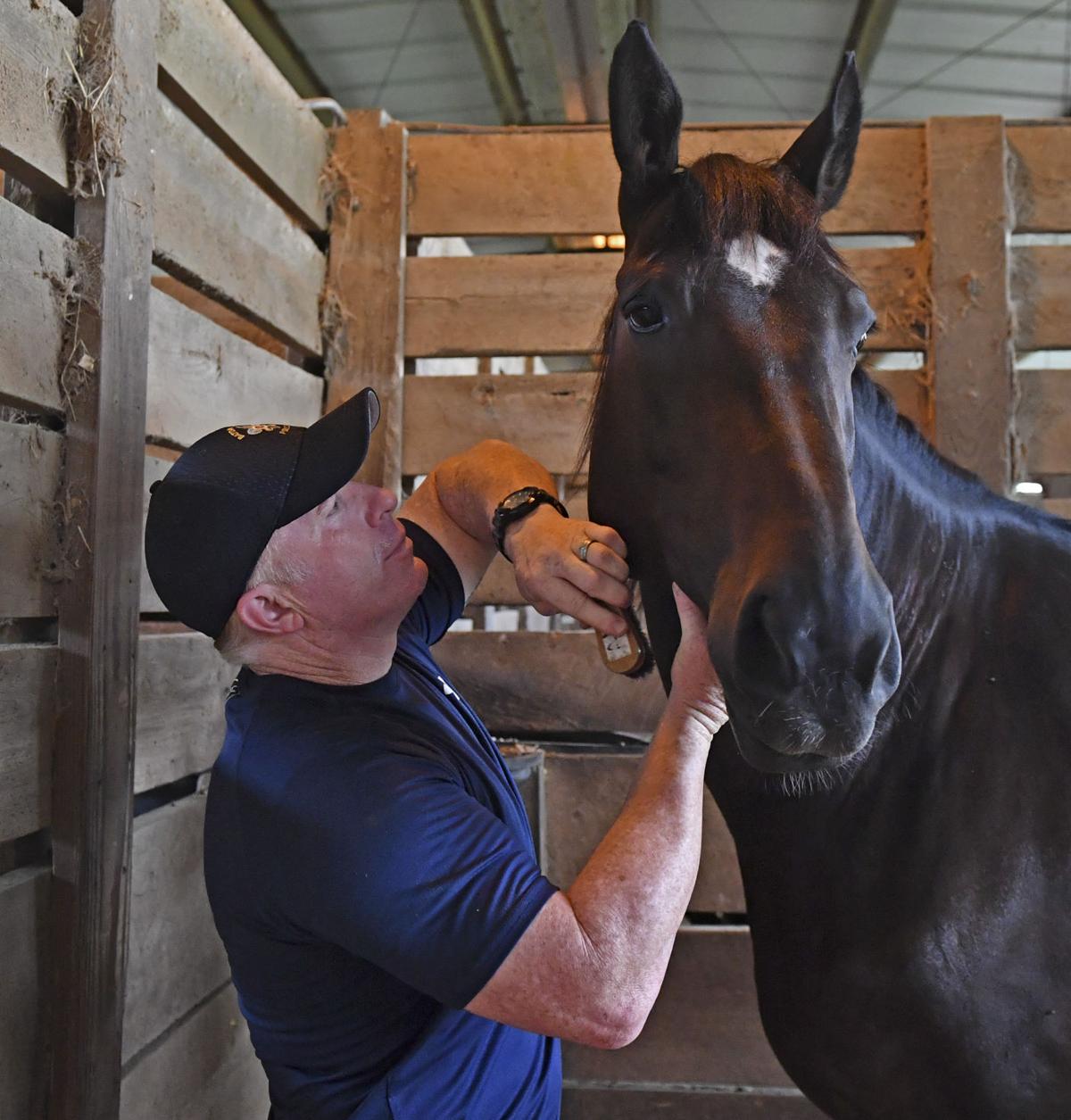 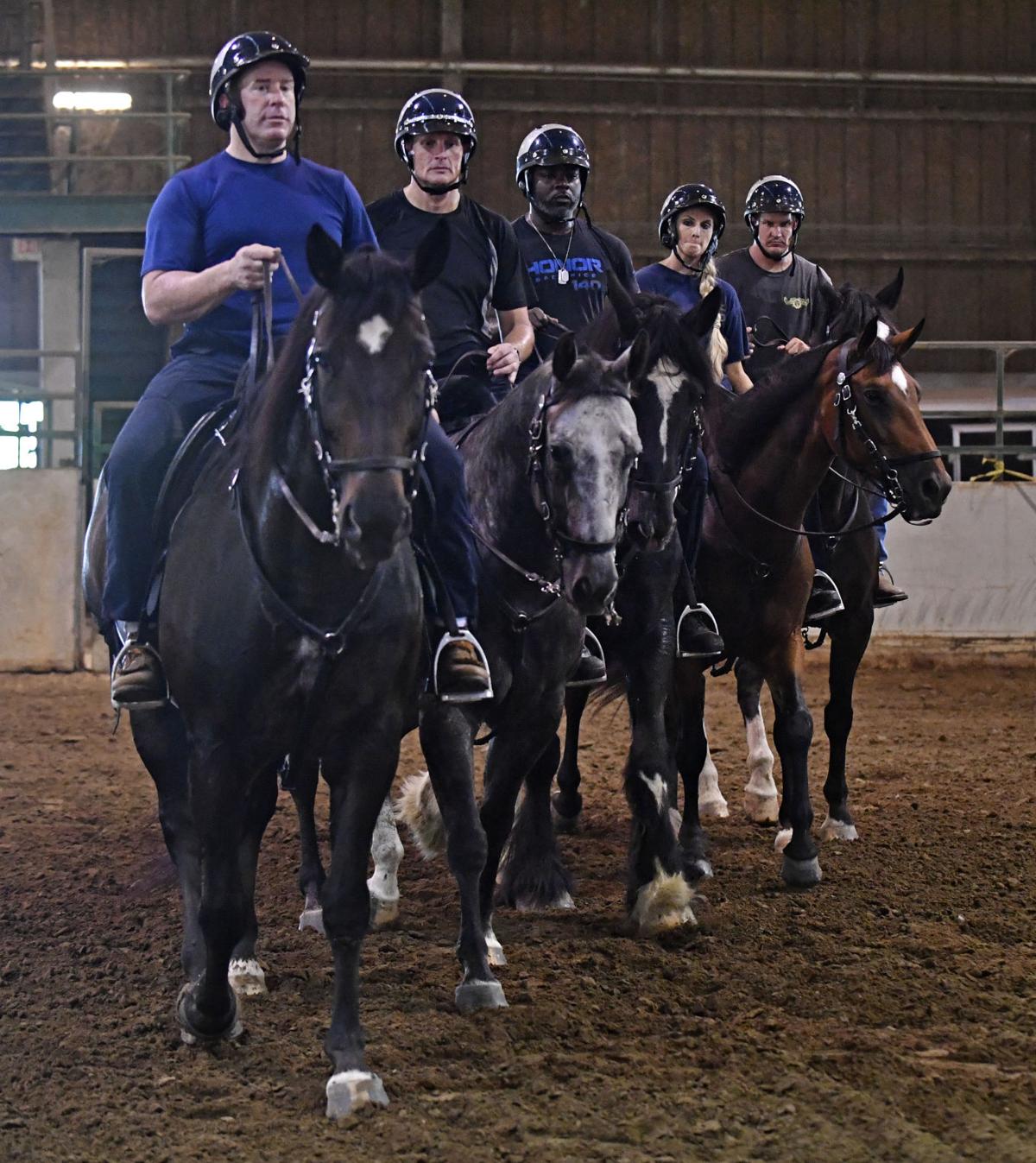 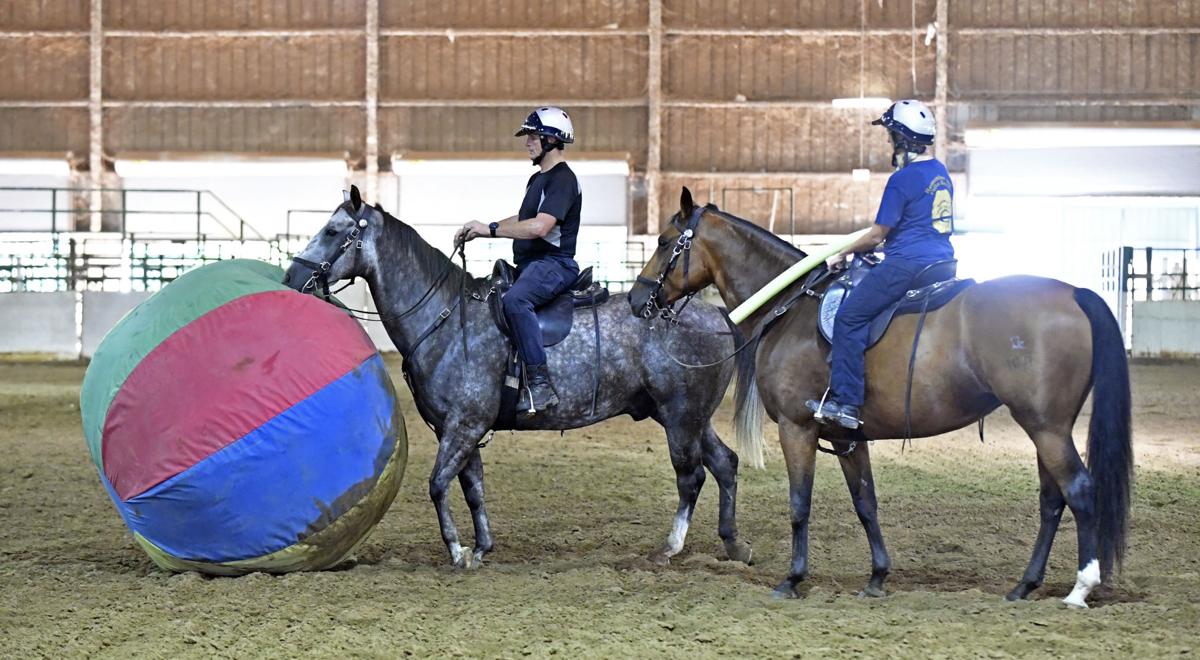 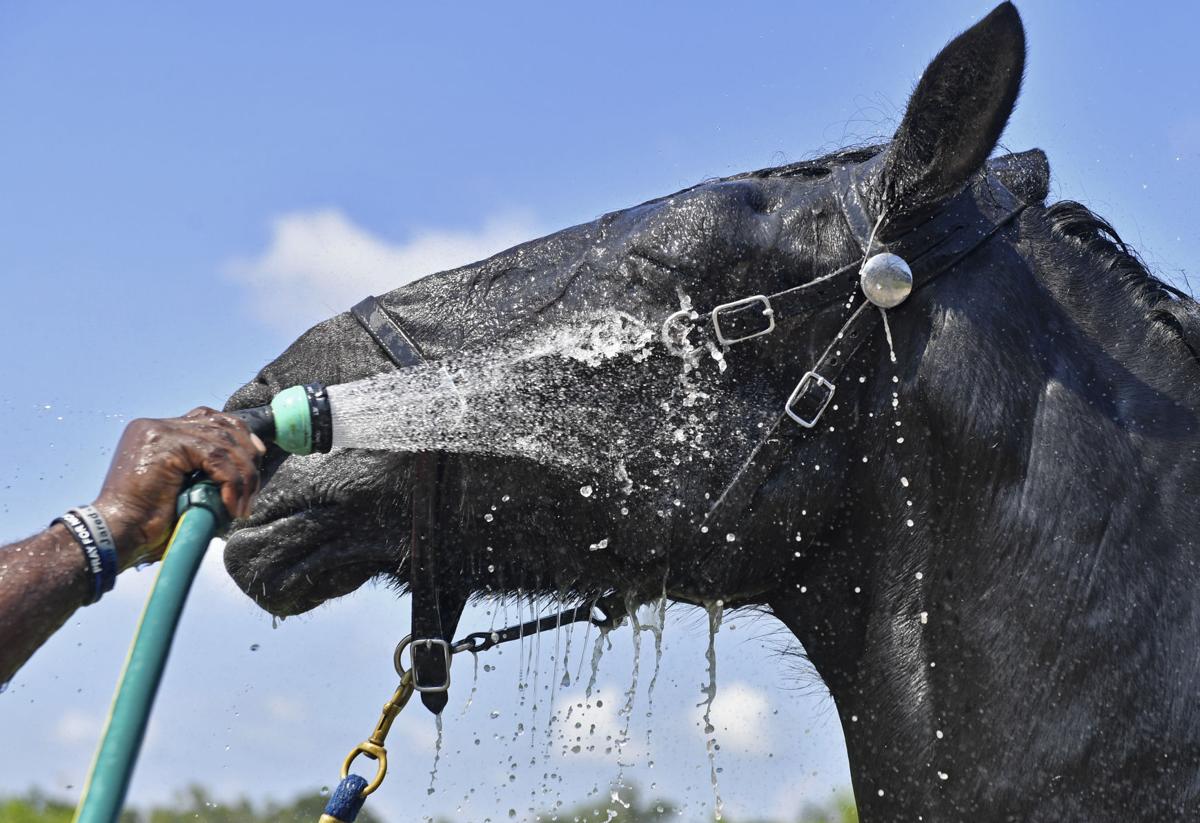 Horses are flight animals. Their first instinct is to run away from anything that could pose a threat, including crowds of boisterous LSU football fans and drunken Mardi Gras revelers.

But the Baton Rouge Police Department's seven equine members have learned to take both in stride.

"Everything we teach them goes against their natural instincts," said Sgt. Paul Patterson, commander of the mounted division, during a recent training session for the horses and their riders.

In addition to providing crowd control at special events and participating in the occasional missing person search, the horses help bridge the gap between Baton Rouge residents and police, Patterson said. That aspect of their job has become especially important in recent years as the department focuses on improving community relations, calling on the public to help detectives solve crimes and build safer neighborhoods.

"I can drive through a neighborhood in a car and people want nothing to do with me. When I'm on a horse, it's a different story," Patterson said. "These horses are the best conversation starter around ... and I think they're one of the best tools we have as officers."

Patterson said he's received some valuable tips on horseback because residents often feel more comfortable being seen in public conversing with the police when anyone who notices will likely assume they're just talking about horses, not "snitching" on their neighbors.

Mounted officers often participate in neighborhood canvases and give demonstrations at schools and churches, teaching children some fun facts about equine behavior and police horse techniques.

Part of the horses' job is to stand quietly while dozens of small excited humans gather around them, admiring the size of their hooves and maybe even reaching up to feel the velvet texture of their muzzles. Patterson said for some kids it means seeing police officers in a new light — they can be fun and impressive, not scary or intimidating.

The division consists of four full-time officers, each assigned a certain horse. The officers spend their days taking care of the animals and either training or participating in scheduled events and demonstrations. The division also includes several auxiliary officers, who work in other divisions but spend a little time each month filling in where needed, rotating among the unit's remaining three horses.

Photos, video: A day in the life of Mounted Patrol

The horses are boarded at a local stable, and when they're not working, they can be found munching hay in their stalls or grass in their pastures. Officers said the costs of maintaining the division are relatively low because they do all the daily barn chores themselves.

Questions about financing for the program arose when the East Baton Rouge Metro Council voted in 2006 to bring back the mounted patrol division almost 20 years after it had disbanded, approving a proposal of then Chief Jeff LeDuff. Officials had closed the program in 1987 after deciding it wasn't worth the money.

The department purchased four horses for its 2006 relaunch, but the division has since grown to seven. Its equine ranks have undergone some recent changes after the unexpected death of "Tank," a gentle giant who served 12 years with the department and became known among residents for his imposing size and quiet demeanor.

Death of veteran police horse 'Tank' felt within Baton Rouge Police Department: 'He will be missed'

The Baton Rouge Police Department said goodbye earlier this month to a gentle giant within its ranks: the veteran police horse "Tank," who had…

He was one of several BRPD horses born and raised at the Louisiana State Penitentiary at Angola. His replacement also came from Angola, though the prison has shifted its breeding program away from the percheron-thoroughbred crosses meant for police work, focusing now on quarter horses, which are smaller and more often used for working cattle and competing on the western show circuit.

"Rougarou" arrived earlier this summer, a dapple gray quarter horse assigned to Sgt. Mike Thomas, who spent the past eight years working with Tank. Thomas said Rougarou has already demonstrated a steady temperament, which will make him an asset to the division as he continues learning what's expected of him.

The officers use several different tools to help desensitize their mounts to things they'll experience as police horses, including rubber pool noodles and a giant beach ball about five feet in diameter that the animals learn to push around, mimicking how they should react to a group of people encroaching on their space.

Thomas said his rookie partner is still getting used to the program, adjusting to the particular challenges of his job. Rougarou seemed to agree. He caught sight of the beach ball rolling around during a recent training session and, in a momentary display of panic, leapt into the air — reminding his new handlers in no uncertain terms that becoming a police horse doesn't happen overnight.

After an LSU student was accused of shouting racial slurs against three other students during a football game last month, the university is in…