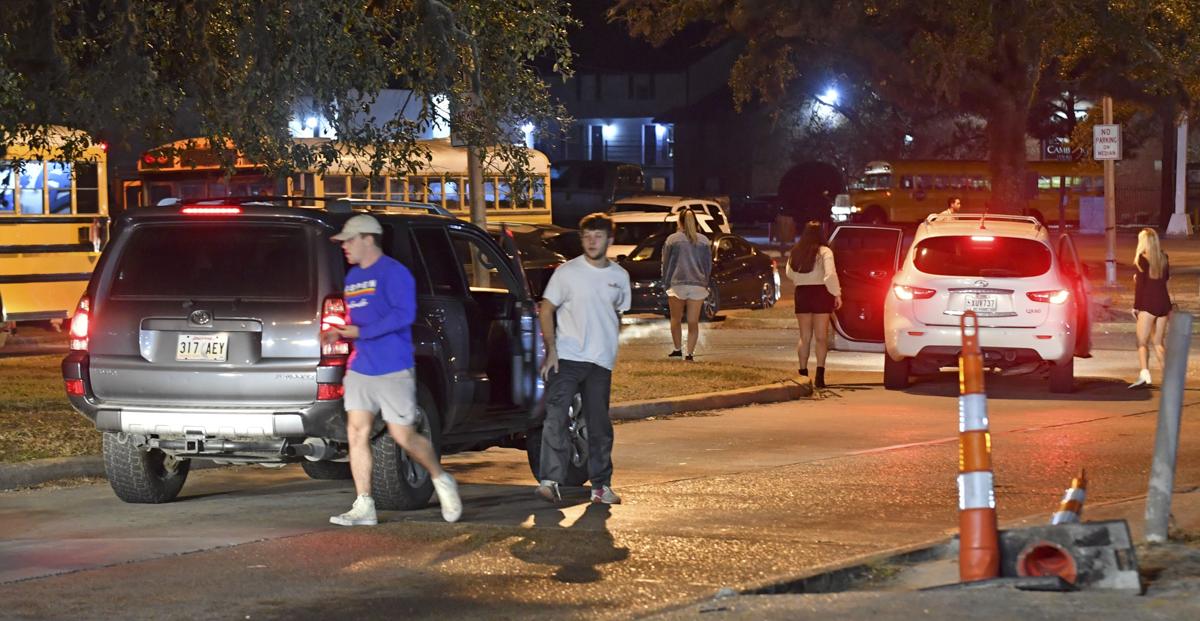 People are dropped off in the street as the bar scene at Tigerland comes to life late Thursday night, November 21, 2019, south of LSU's campus in Baton Rouge, La.

People are dropped off in the street as the bar scene at Tigerland comes to life late Thursday night, November 21, 2019, south of LSU's campus in Baton Rouge, La.

On a recent evening in Tigerland — a cluster of bars near LSU that remains a popular party destination for the under-21 crowd — Uber and Lyft drivers sat in their idling vehicles staggered along the curb, sometimes stacked three cars deep as they waited for their customers.

Whether disgorging carloads of young adults decked out in bedsheet togas or finding a free patch of pavement to pick up the returning gaggles of inebriated students, ride-hailing services were omnipresent throughout the night. It's a practice local law enforcement finds encouraging.

According to the Baton Rouge Police Department, the key demographic of young adults ages 18-21, often cited as reckless and cavalier when it comes to drinking and driving, have been making good choices in recent years on their wild nights out. DWIs for this age group have dropped dramatically from about 10 years ago, and officials say this likely has to do with the increase in ride-hailing options.

“It used to be that Tigerland was crazy,” said Cpl. Jason Martin, a member of the Police Department's DWI Task Force. “Nobody got designated drivers. They didn’t care. Nowadays, there’s Ubers lined up double-stacked down Bob Pettit, in both directions.”

It was 1971 and the sun was rising over Tigerland. Large apartment complexes springing up offered LSU students what newspaper ads described as…

Many parents have started to add their adult children to their personal Uber and Lyft accounts — complete with the parents' credit card information — as a way of keeping their kids safe, he said.

Martin clarified that he and his colleagues are not necessarily seeing fewer DWIs in that particular age group, but that he believes the majority are making the right decisions.

“I believe ride-share options overall could certainly be a contributing factor to reducing impaired drivers," said Lt. Jerad Daniel with the East Baton Rouge Parish Sheriff’s Office. “Personally, in the field during enforcement, I have seen over the years an increase in ride-share use.”

Although Martin and Daniel are heartened by the downward trend in DWI arrests for underage drinkers, both were unwilling to point to any single factor that may contribute to this outcome.

“It’s an increase in ride-share availability, absolutely,” Martin said. “Five or six years ago, we didn’t have Uber or Lyft here.”

Brian Trascher, the original lobbyist who had worked in 2014 to help bring Uber to Baton Rouge, said that while there are too many variables to determine a direct correlation between a lower number of DWI arrests and the increased availability of ride-hailing options, ride-hailing has irrevocably changed the drinking-and-driving landscape in the state.

“You talk to people, and they say, ‘I don’t ever drive if I know I’m going to be drinking. It’s just too easy to Uber,’ ” Trascher said. “Or if they don’t expect to be drinking and they do, they Uber home and come back to pick their car up the next day.”

The Uber ride-sharing service will be available statewide starting Wednesday as a result of a new state law, officials said Tuesday.

Like Martin, Trascher cited parents sending their children to college with an Uber app containing their credit card information — a practice he said takes away any excuse to drink and drive. He speculated that in areas like Tigerland, students can probably Uber back to their campus apartments for less than $5.

Law enforcement officials, on the other hand, maintain the difference in DWI arrests over the years can be attributed to a few elements combined, including education and enforcement.

For at least the past 10 years, the Police Department has worked to crack down on impaired driving — no matter the age of the offenders. A highway safety grant has equipped the department with extra manpower to increase patrols in areas like Tigerland, where Martin noted young adults can be deterred from future bad behavior by seeing their friends arrested for drunken driving.

“For those who make a poor choice to operate a vehicle while impaired rather than a smart choice to use other methods of transportation, we will be there to catch them and there will be consequences,” Daniel said.

“Greek Life does enforce the PS-78 policy on all of its organizations that states you can’t leave events and come back in after consuming alcohol,” Lee said. “Third-party vendors must be present to prevent people from being overserved and possibly getting behind the wheel of a car.”

By bringing in a third-party vendor to fraternity and sorority events, Lee said an external source is always checking student IDs to make sure no one is drinking underage or becoming overintoxicated.

Though law enforcement may not be able to answer exactly why fewer DWI arrests involve underage drinkers, they are generally happy to see the parking lots of high-traffic party areas filled with cars at 3 or 4 o’clock in the morning — evidence that people have taken an Uber or Lyft home.

“We know that there’s cars left in the parking lot at Tigerland,” Martin said. “That’s an encouraging sign.”