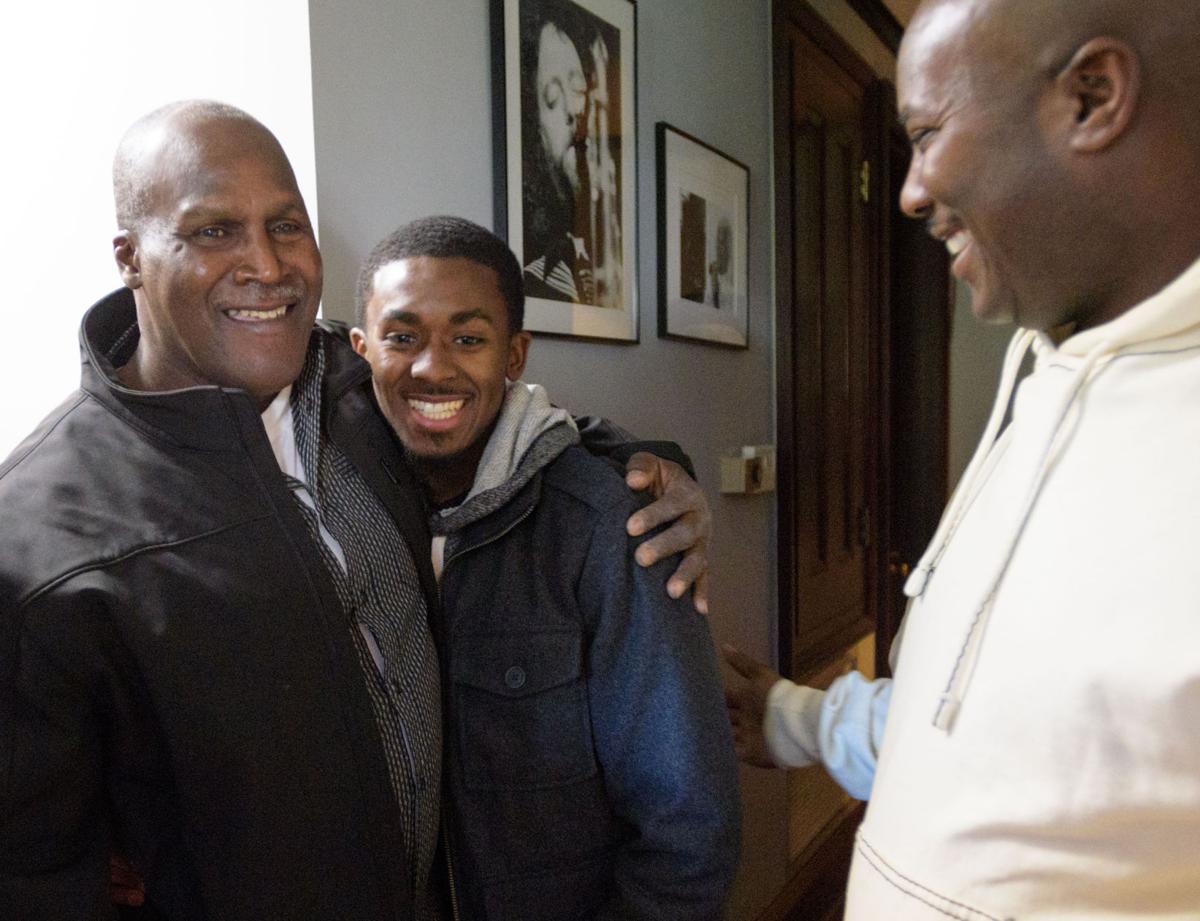 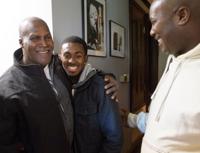 Seen shortly after his release Malcolm Alexander, left, age 58, was roughly the same age as his grandson son Malcolm Stewart, Jr., age 20, center, next to his son Malcolm Stewart before a press conference in New Orleans, La. Tuesday, Jan. 30, 2018. Alexander was released after almost 38 years of life sentence by Jefferson Parish District Judge June Berry Darensburg for 'ineffective assistance of counsel' in his one-day rape trial in 1980. The Innocence Project stated that an 'ineffective trial lawyer and flawed eyewitness identification procedure destroyed lives.' 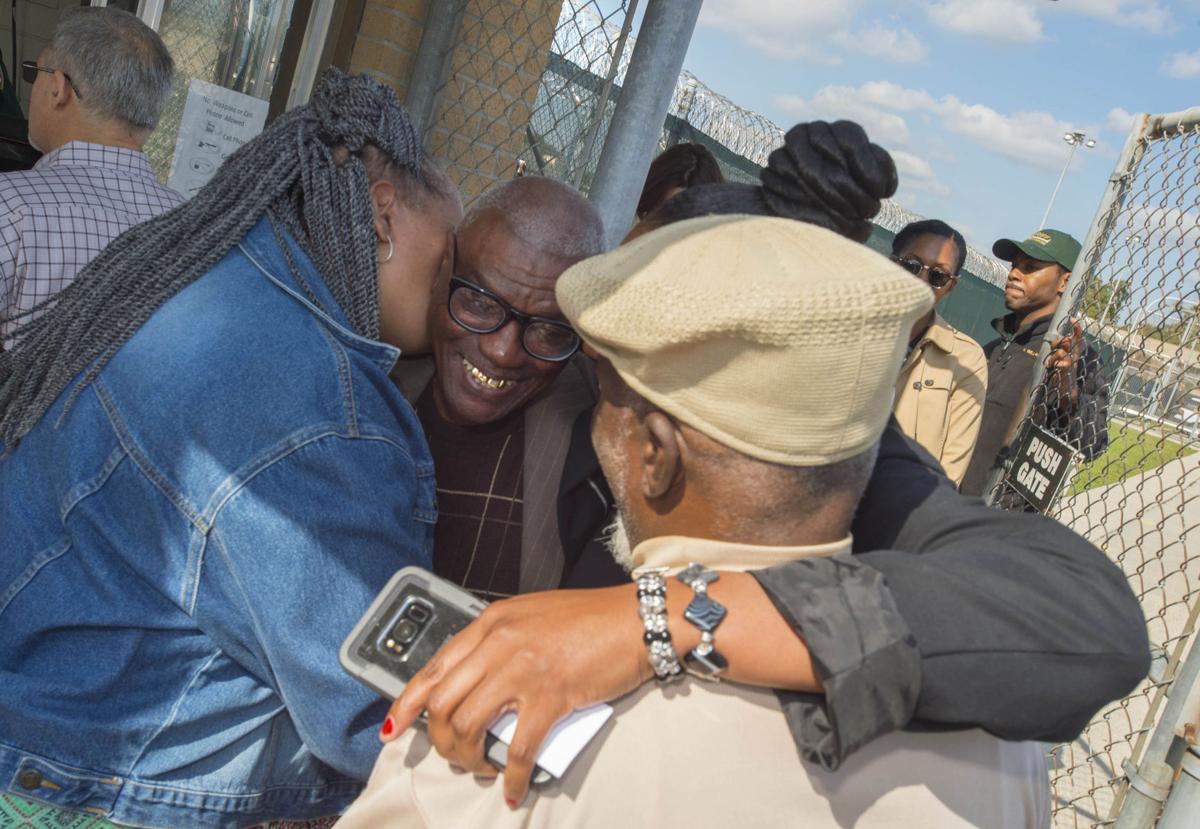 Seen shortly after his release Malcolm Alexander, left, age 58, was roughly the same age as his grandson son Malcolm Stewart, Jr., age 20, center, next to his son Malcolm Stewart before a press conference in New Orleans, La. Tuesday, Jan. 30, 2018. Alexander was released after almost 38 years of life sentence by Jefferson Parish District Judge June Berry Darensburg for 'ineffective assistance of counsel' in his one-day rape trial in 1980. The Innocence Project stated that an 'ineffective trial lawyer and flawed eyewitness identification procedure destroyed lives.'

In November, Wilbert Jones was released from prison after more than 45 years behind bars, when a Baton Rouge judge overruled his 1974 rape conviction, determining that crucial evidence had been withheld from his defense attorneys.

Two months later, Malcolm Alexander was freed in New Orleans after a judge ruled his counsel had been ineffective during the 1980 trial that convicted him of rape, exonerating him after nearly 38 years in prison. Newly tested DNA evidence also linked another man to the crime.

In both cases, lawyers for the men say eyewitness misidentification led to decades of injustice as Jones and Alexander remained innocently jailed instead of the true perpetrators — an issue Louisiana lawmakers are hoping to address this session.

"One case like that is too many," said state Sen. Wesley Bishop, D-New Orleans, who is sponsoring a bill to adopt statewide procedures for how eyewitness identifications are done by law enforcement agencies. "There needs to be room for a bill like to this to try to limit those numbers of people (in prison) who definitely did not commit a crime.”

“We’re trying to get on the front end of the criminal justice system, trying to educate people about how there are ways we can prevent these wrongful convictions from happening," said Jee Park, an attorney for the Innocence Project New Orleans.

Park said the proposed legislation will not only help eliminate any bias by officers, whether intentional or more often not, but also provide protocols to eliminate certain factors that can lead to misidentification by a witness.

In both Jones' and Alexander's cases, the rape victims who linked the men to the crimes through an eyewitness identification — pointing out the perpetrator through an in-person or photo lineup — later told officials they were not completely sure of their identification, Innocence Project New Orleans lawyers have said.

Four months after the Gretna-area rape, when she made the ID, the victim told police she was "more than 98 percent sure" Alexander was the rapist.

The victim in the Baton Rouge-area rape chose Jones from a five-person lineup, but later called police to say there was "a small possibility" the person she identified wasn't her attacker.

Jones' overturned conviction is under review by the Louisiana Supreme Court after an appeal by the East Baton Rouge District Attorney's Office. Prosecutors argue he was not wrongfully convicted, saying two different juries found him guilty. The victim in the case has since died.

“Having a more robust process in place will hopefully get us to the point where the wrong person is not convicted," said state Sen. J.P. Morrell, D-New Orleans, who plans to co-sponsor the bill.

The bill would require that law enforcement agencies either adopt the International Association of Chiefs of Police protocols for eyewitness identification, or follow protocols that would include a blind or blinded administrator — someone who does not know who the suspect is or cannot tell where in the lineup the suspect is placed — who would document the witness' statement on confidence in the identification afterwards, and who would record the identification procedures.

“Our criminal justice system has a very peculiar past. … We want to make sure we don’t have a peculiar future," Bishop said. "We looked at best practices that were being employed (around the nation), trying to make sure we increase the likelihood that we are convicting people who truly deserved to be convicted."

While Bishop said the bill pulls only from practices used by the FBI and national organizations of police, local law enforcement leaders said they are carefully reviewing the bill.

Pete Adams, the executive director of the Louisiana District Attorneys Association, said his organization has not decided if it will support the bill. However, he said he does have some concern about the policy statements in the bill's language, which talks about the number of exonerations in the state, many of which were fought by district attorneys across the state.

He also said he is hesitant about requiring blinded lineups, where administrators know the suspect but not which suspect is being viewed by the witness, because "the science is not settled on" that method.

"Those are issues we'll have to discuss," Adams said.

The Louisiana Sheriffs' Association did not return calls for comment; however, Ascension Parish Sheriff Jeff Wiley said that based on his initial impression of the bill, he also is concerned.

"The intent of the bill is certainly meritorious," Wiley said. "Anytime law enforcement can improve best practices, agencies' heads should welcome that. … But the notion of legislatively directing agencies … (is) troubling. Where does that stop?"

Wiley did say his agency already follows many of the proposed practices in the bill, but said that decision should be left up to individual officials.

The New Orleans Police Department, however, said it has no objection to the bill.

"Current NOPD policy, developed in cooperation with the Department of Justice Civil Rights Division and the Federal Monitor Team, incorporates most, if not all, of these best practices," said department spokesman Beau Tidwell. "The NOPD is proud to be a statewide leader in working to ensure accurate and fair lineups.”

The Baton Rouge Police Department declined to comment on the bill, as did Baton Rouge Union of Police President C. Bryan Taylor.

Some psychologists and experts in the field of eyewitness identification say a growing body of scientific research supports the legislation.

"What we found over the years is that first of all, memory is highly malleable," said Nancy Steblay, a psychology professor at Augsburg University in Minneapolis who has studied eyewitness identification for 30 years. "(An identification) is about memory but it's not only about memory. It's about pressure and expectations and assumptions, so what we want to make sure is that identification procedure somehow tries to tamp down or peel away all kinds of external influences."

Steblay also said research has shown that cross-race identifications, where the witness and perpetrators are different races, have proved to be even less reliable.

"You're about 1.5 times more likely to see an error if it's cross-race versus a same-race crime," Steblay said. "In general, humans are not very good at encoding really detailed aspects of faces that they see for a short time, but the problem is even worse if it's a person of another race from themselves."

She said overall, the bill Bishop has proposed is a good way for Louisiana to minimize malleable memory and the cross-race effect. However, she said the bill is missing an important best practice, which recommends that law enforcement agencies do not test the same suspect with the same witness multiple times.

"You don't want to have repeated identification procedures with the same suspect, same witness," Steblay said, such as first doing a photo lineup, then bringing in the suspect for an in-person lineup. "That was a piece I found missing there. … We really want to underscore for police that first identification is the one that counts."

Innocence Project New Orleans lawyers said enacting this bill, which would make the eyewitness identification process uniform across the state, would ensure that all Louisianans have the best shot at justice.

“(This bill) will make this aspect of the criminal justice process more reliable,” said Kia Hayes, an attorney for the Innocence Project New Orleans. “The chance that you’re going to be misidentified in a lineup shouldn’t depend on where the crime happens to be or where you live.”

EDITOR'S NOTE:  This report was updated Monday, March 5 to correct how long Wilbert Jones was in prison. He served more than 45 years, not 50 years. The Advocate regrets the error.

Darensburg ordered Alexander "immediately released" from custody on Tuesday after 38 years on the basis that he had received "ineffective assistance of counsel" during his 1980 trial for the rape of a Gretna shop owner.