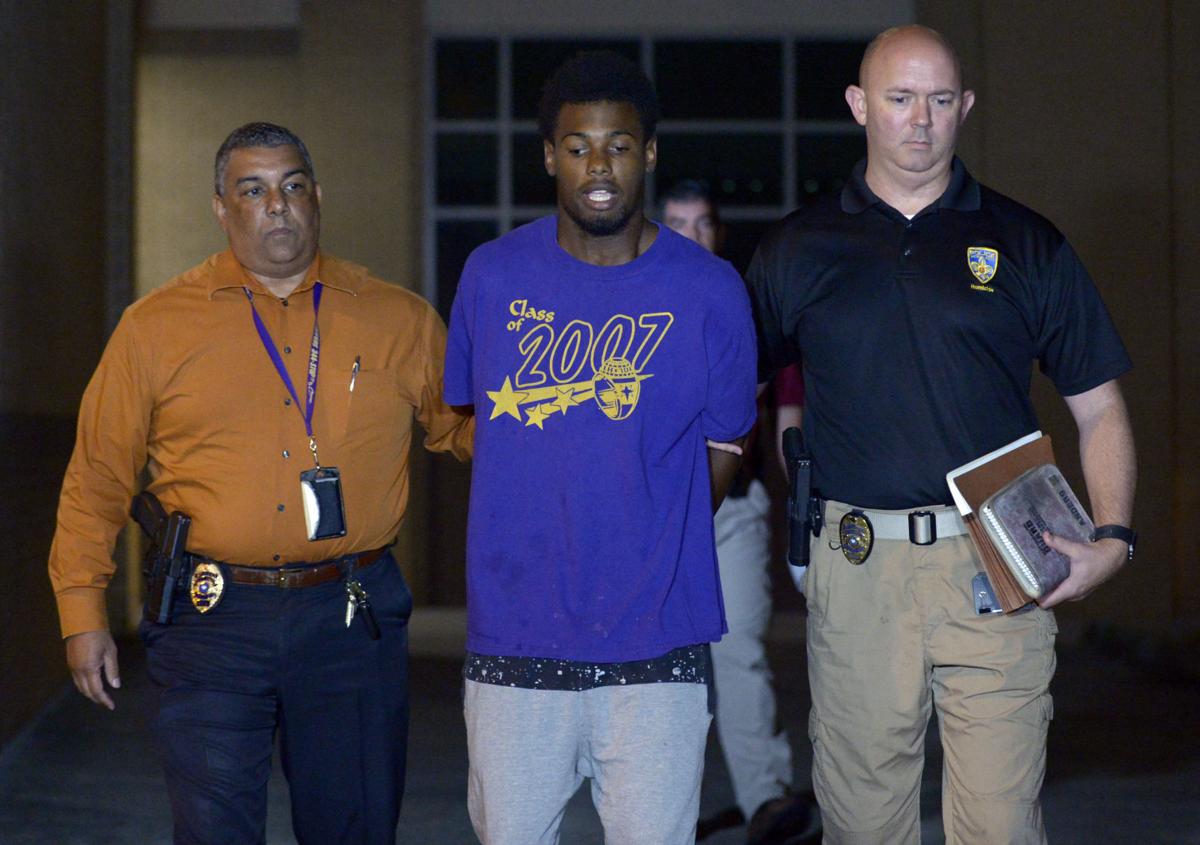 Baton Rouge Police Detective Joe Dargin, left, and Detective Jeff Anders, right, escort Raheem Howard, 21, of 6952 Carvel Court in Baker, on Aug. 10, 2018, at the violent crimes unit in Baton Rouge, La. Counts against Howard, who was accused of firing a gun at a Baton Rouge Police Officer following a traffic stop, are now being dropped for lack of evidence, although the investigation is ongoing, including a probe of the officer, Yuseff Hamadeh. 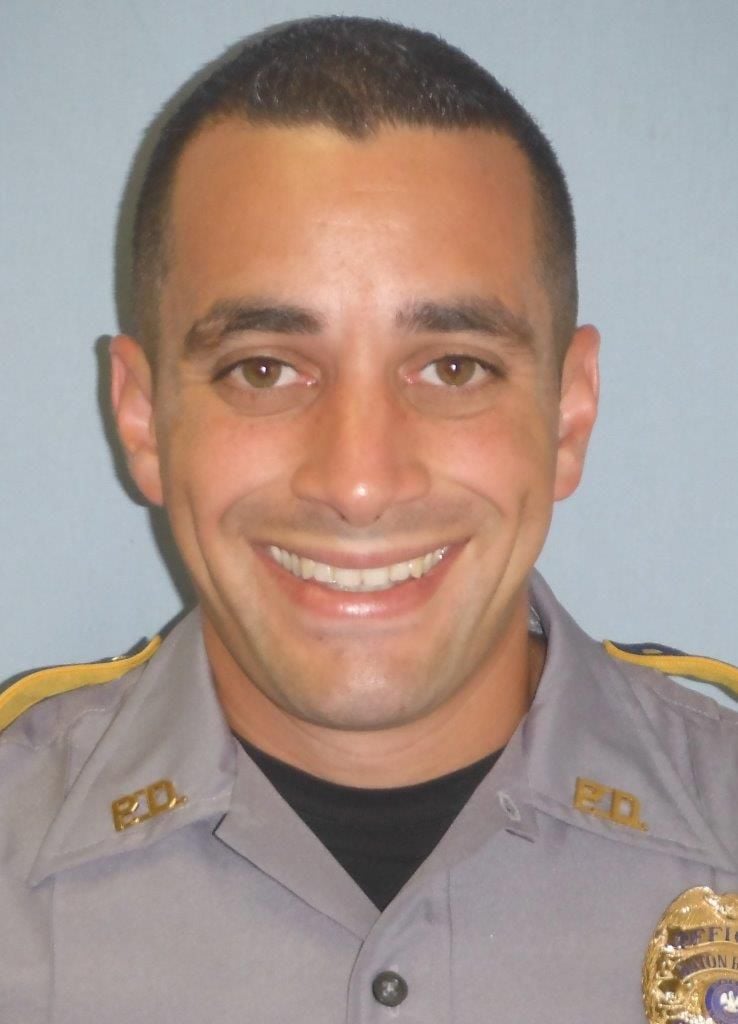 Baton Rouge Police Detective Joe Dargin, left, and Detective Jeff Anders, right, escort Raheem Howard, 21, of 6952 Carvel Court in Baker, on Aug. 10, 2018, at the violent crimes unit in Baton Rouge, La. Counts against Howard, who was accused of firing a gun at a Baton Rouge Police Officer following a traffic stop, are now being dropped for lack of evidence, although the investigation is ongoing, including a probe of the officer, Yuseff Hamadeh.

A man accused of shooting at a cop following a traffic stop last month won’t be prosecuted for the attempted murder of a police officer because there's no solid evidence showing the motorist either had or fired a weapon, East Baton Rouge District Attorney Hillar Moore III said Tuesday.

Moore said he will not pursue charges at this time against Raheem Howard, 21, though the prosecutor said the investigation will continue. Officer Yuseff Hamadeh fired his weapon at Howard during a chase that followed the traffic stop but said he shot in response to Howard first firing at him. Witnesses reported hearing only one shot.

“At this point, I didn’t think there was sufficient evidence," Moore said. "That doesn’t mean there will be no charges stemming from this case."

Howard was released from the $90,000 bail set on counts of attempted first-degree murder and illegal use of a weapon but is still being held in East Baton Rouge Parish Prison on bench warrants from earlier unrelated cases.

On this there's agreement: Raheem Howard fled from the traffic stop conducted by Baton Rouge police officer Yuseff Hamadeh on Aug. 7 about 6:3…

Paul said the department will release audio captured by Hamadeh’s vehicle’s rear camera as well as video recorded by a bystander. No video was captured by the vehicle’s rear camera because it was facing down. No video or audio was recorded on Hamadeh’s body camera or his vehicle's front dash camera because they were turned off during the encounter, Paul said.

"We don't believe that releasing it at this time will interfere (with the ongoing investigations)," Paul said Tuesday. The police chief had previously withheld the footage from the public despite a new policy created to improve transparency following critical incidents involving officers. He said Tuesday that key investigative steps have now been completed.

The day after the Baton Rouge Police Department announced it would not yet release the body and dash camera video from an Aug. 7 officer-invol…

Hamadeh stopped Howard's car Aug. 7 on North 16th Street over a missing license plate. At that point, Howard ran away, prompting Hamadeh to follow. During the chase, according to police, Howard turned and shot at Hamadeh, who returned fire.

Initial police accounts of the incident said both men fired once.

Howard was arrested days later — and while he admitted fleeing the traffic stop, he was adamant that he never had a gun. Neighbors and witnesses also said they heard only one gunshot.

No one was injured in the shooting.

Moore said he reviewed the available footage from the entire incident, as well as witness statements and physical evidence before determining to change Howard's booking. Moore said that, at this point, police do not have clear evidence that a second shot was fired: no shell casings — beside from the officer's weapon — were found, no bullet holes were discovered and a gun has not been recovered. Moore said officers did an exhaustive search of the backyards in the area, even using metal detectors, and did not find any shell casings.

Moore also said every person interviewed by investigators, except for Hamadeh, said only one shot was fired.

"Based on the review of that, I didn’t have sufficient evidence to continue on those charges at this time," Moore said. However, the prosecutor was clear the investigation remains ongoing, and the evidence is not conclusive that there was not more than one shot fired.

"I cannot say there was or was not more than one shot fired," Moore said. "Everyone else seems to indicate one shot was all they heard."

Howard’s attorney, Ronald Haley Jr., said the decision from Moore is life-changing for his client, whom he said was falsely accused of a crime that can hold up to 50 years in prison, if convicted.

“I'm happy the DA’s Office acted swiftly and justly; much credit to Hillar Moore and his office,” Haley said. However, he said the entire incident has exposed what he called “transparency problems” in the Baton Rouge Police Department. Haley said he is very concerned about how the department is utilizing body cameras and about excessive force.

Baton Rouge police captured the man who fired a gun at an officer earlier last week and arrested him on attempted first-degree murder, police …

Hamadeh also fatally shot another man also following a traffic stop in June 2017. In that incident, police said Jordan Frazier turned and pointed a weapon at officers, prompting Hamadeh to fire at him. That incident was also not captured on video.

“It’s one thing to make a mistake on the job, it’s another thing to cover up in this manner,” Haley said. “What is the Police Department going to do? Is the DA or the attorney general going to look at criminal proceedings at the officer involved? … When you have a transparency problem, you can’t police yourself.”

But Paul said Tuesday it was his investigators who led Moore to drop the case against Howard. The police chief said new evidence prompted investigators to meet with officials in the District Attorney's Office last week. Paul declined to explain what was the new evidence, citing the ongoing investigation.

"Our police officers began that process," Paul said. "It’s important to understand, absent your articles in The Advocate or press conferences — that had absolutely no influence on our investigation. We were going to do that from day one."

The Advocate first reported on Aug. 27 — 14 business days after the incident — that Paul decided not to release the audio and video footage from the officer-involved shooting, despite his new policy that gave him the discretion to release such footage 12 days after such an incident. The following day, Paul explained that there was actually no body camera or front dash camera footage of the incident, only audio from the rear vehicle camera and a bystander's video. Howard's attorney on Aug. 30 held a news conference discussing the case, calling for transparency and more information.

A year after the rollout of body cameras for all Baton Rouge police officers, the department has adopted a new policy for the faster release o…

Paul and Moore said their agencies met the same day as that news conference to discuss the case.

"As we begin to gain the public’s trust, I hope they trust us enough to say, 'BRPD can do a thorough investigation,'" Paul said. "We are moving forward as an organization."

Paul said the administrative investigation into Hamadeh's actions is still ongoing, as is the criminal investigation. The police chief said he will review the evidence at the end of the investigation.

“A man running away from police may seem suspicious, but it is not against the law,” the statement says. “In a world where black citizens are fearful of the outcome of encounters with police officers, it is not a far reach that running seems a viable option. Running should not end in potential harm to a citizen who, by all appearances, has only committed the crime of having a missing tag. Nor should it release the criminal justice system from being responsible for the fair treatment and due process of Mr. Howard.”

Baton Rouge Police Chief Murphy Paul said he plans to release on Wednesday the limited footage from the Aug. 7 officer-involved shooting in wh…

Despite the change in Howard's booking, Moore said Howard will not be released from Parish Prison. It was not immediately clear how long Howard will stay detained, but he is being held on four bench warrants and one contempt of court from prior, unrelated cases, according to Parish Prison records.

After his early August arrest in the officer-involved shooting, his probation was revoked in two separate cases, in which he had pleaded guilty to flight from an officer and simple assault. A third bench warrant and the contempt-of-court bookings are related to separate cases in family court. The final bench warrant is from another incident in which Howard was convicted of flight from an officer.

Haley, Howard’s attorney, said despite the stress of the case and accusations against him, his client has remained truthful and transparent.

“Regardless of the mistakes or hiccups he’s had in life, he’s been a truthful person,” Haley said. “He was scared, scared for a plethora of reasons. He had bench warrants, but also scared at the aggressive nature" of the officer who pursued him.

In the year since Henry and Helen Frazier found out their 35-year-old son had been fatally shot by a Baton Rouge police officer, the couple ha…

A Baton Rouge police officer who shot at a man he had pulled over for a traffic violation Aug. 7 needs to appear in court and explain his acti…