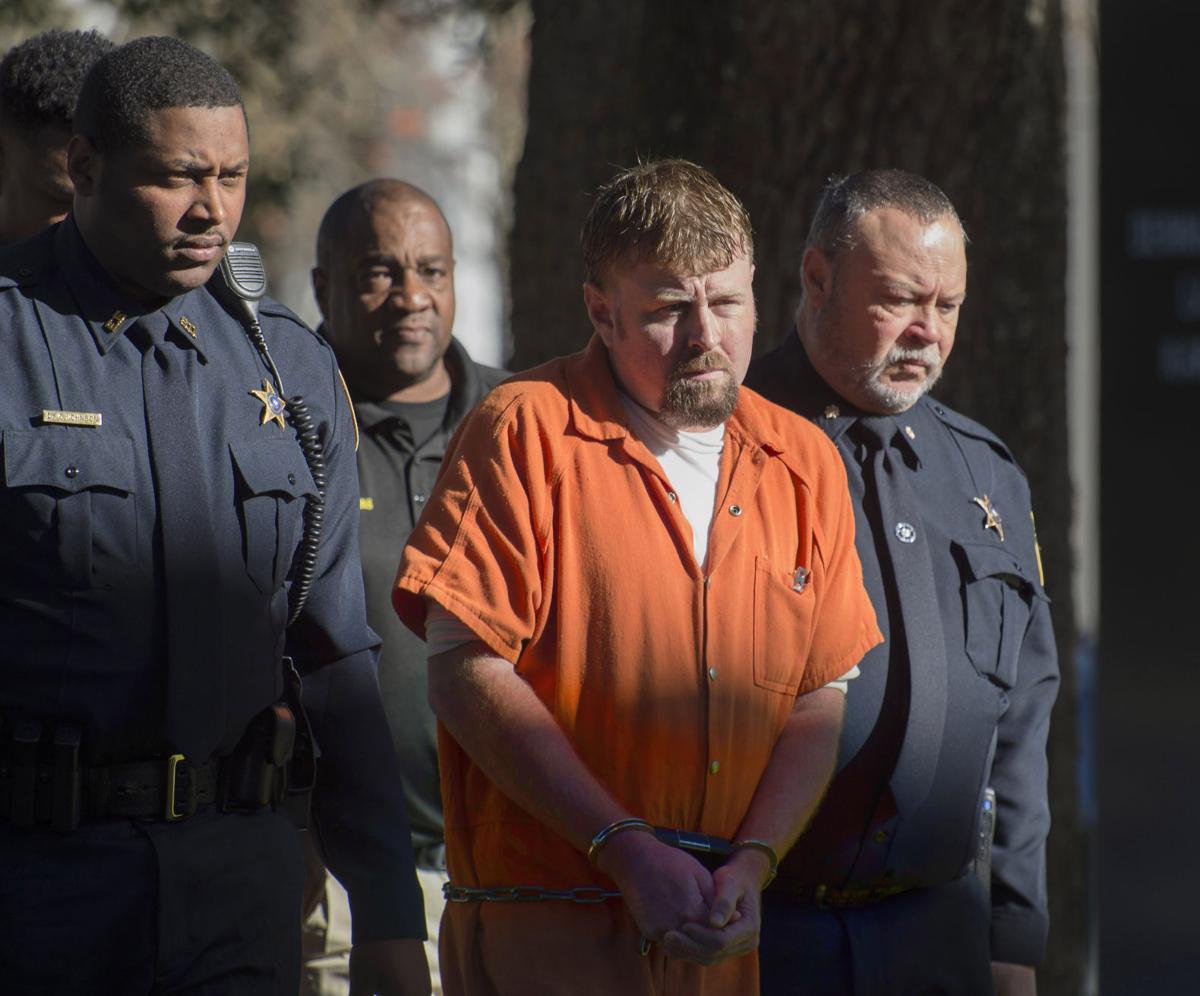 Ryan Sharpe, 36, of Clinton, is escorted by East Feliciana Parish Sheriff's Office deputies into a hearing, Tuesday, Nov. 28, 2017 at the East Feliciana Parish Courthouse in Clinton. Sharpe was arraigned on charges of second-degree murder in the shooting death of Tommy Bass, and attempted first-degree murder in the shooting of Buck Hornsby, who survived. 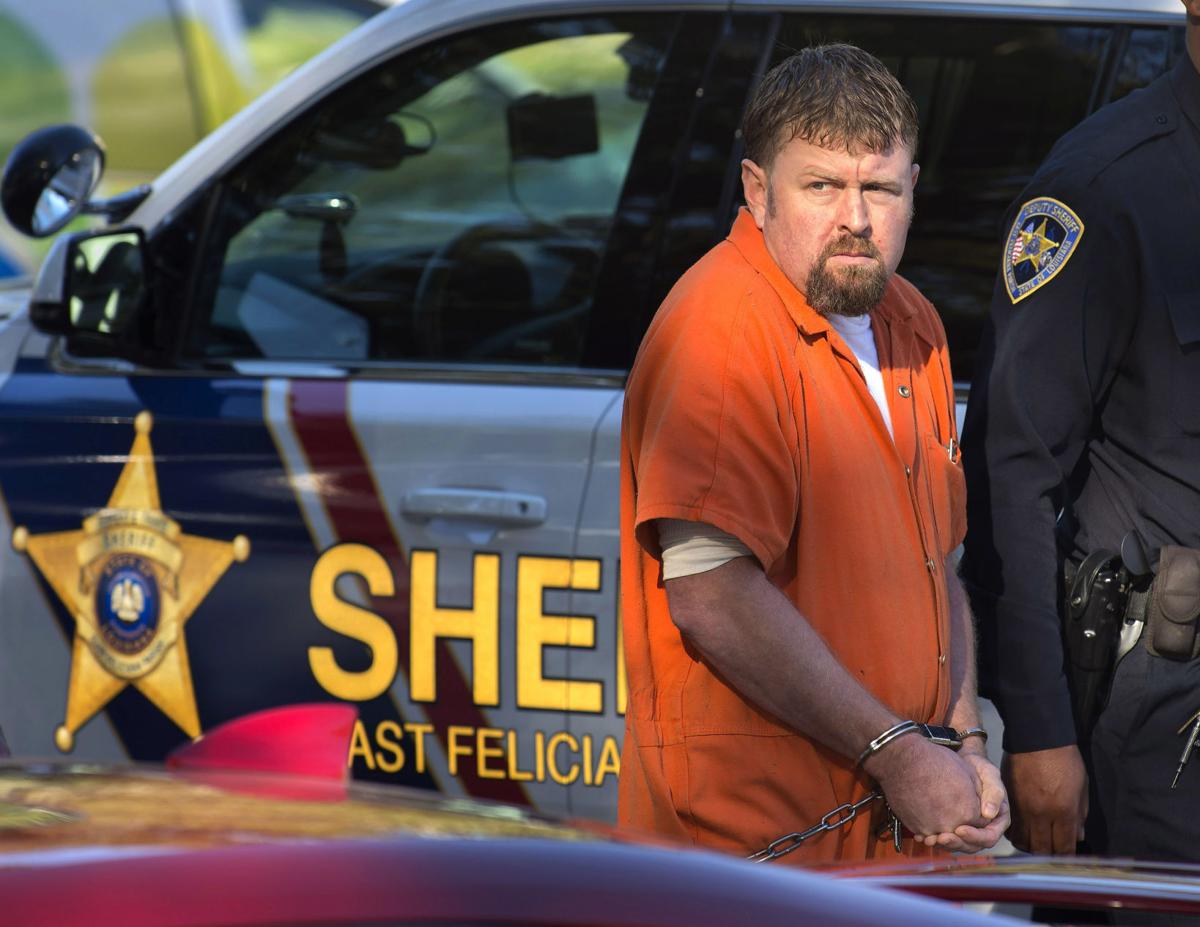 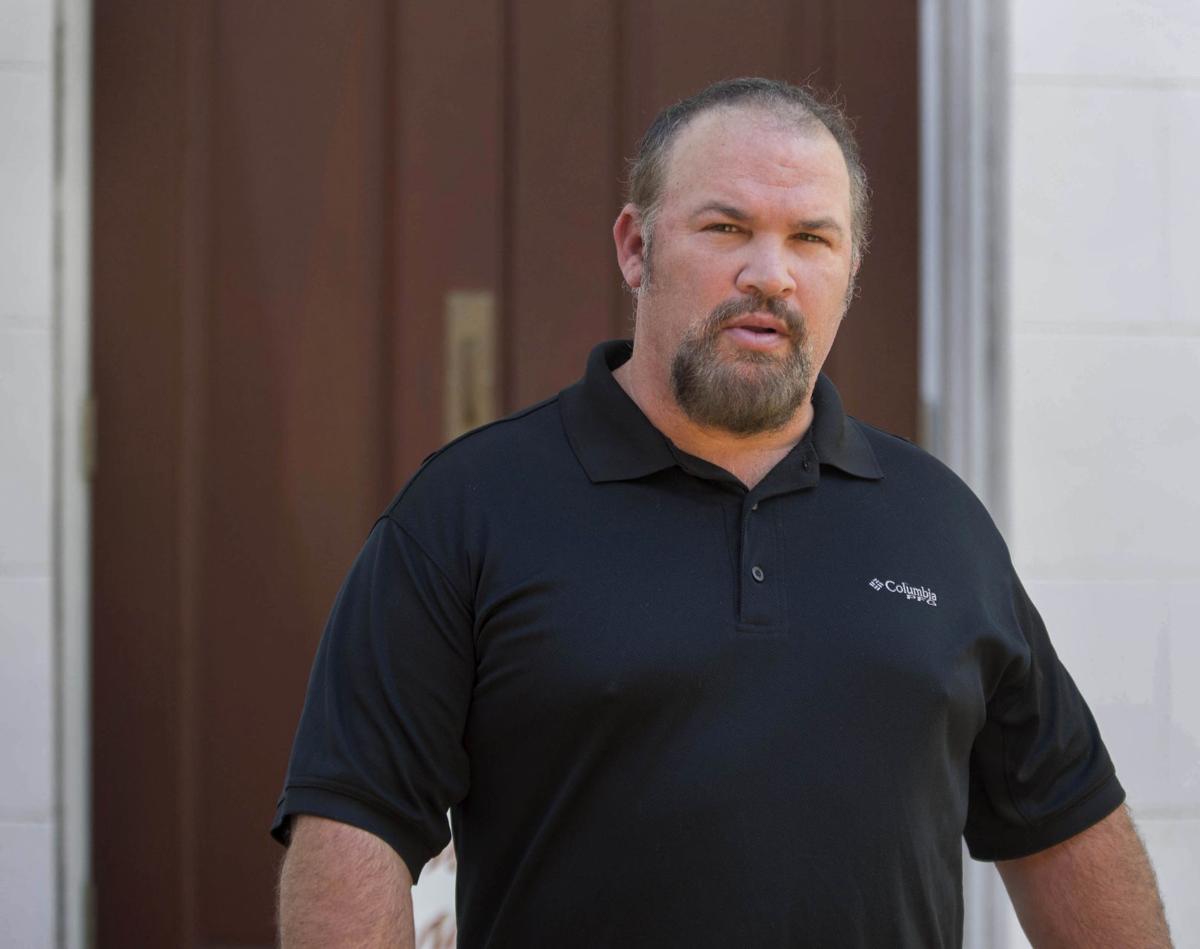 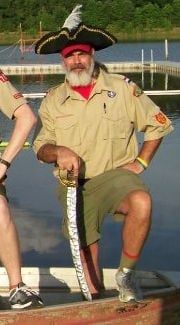 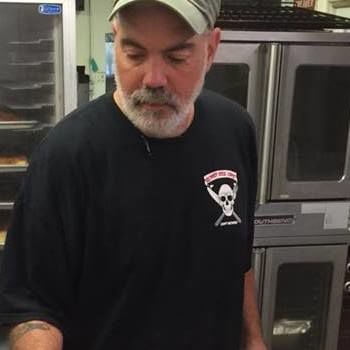 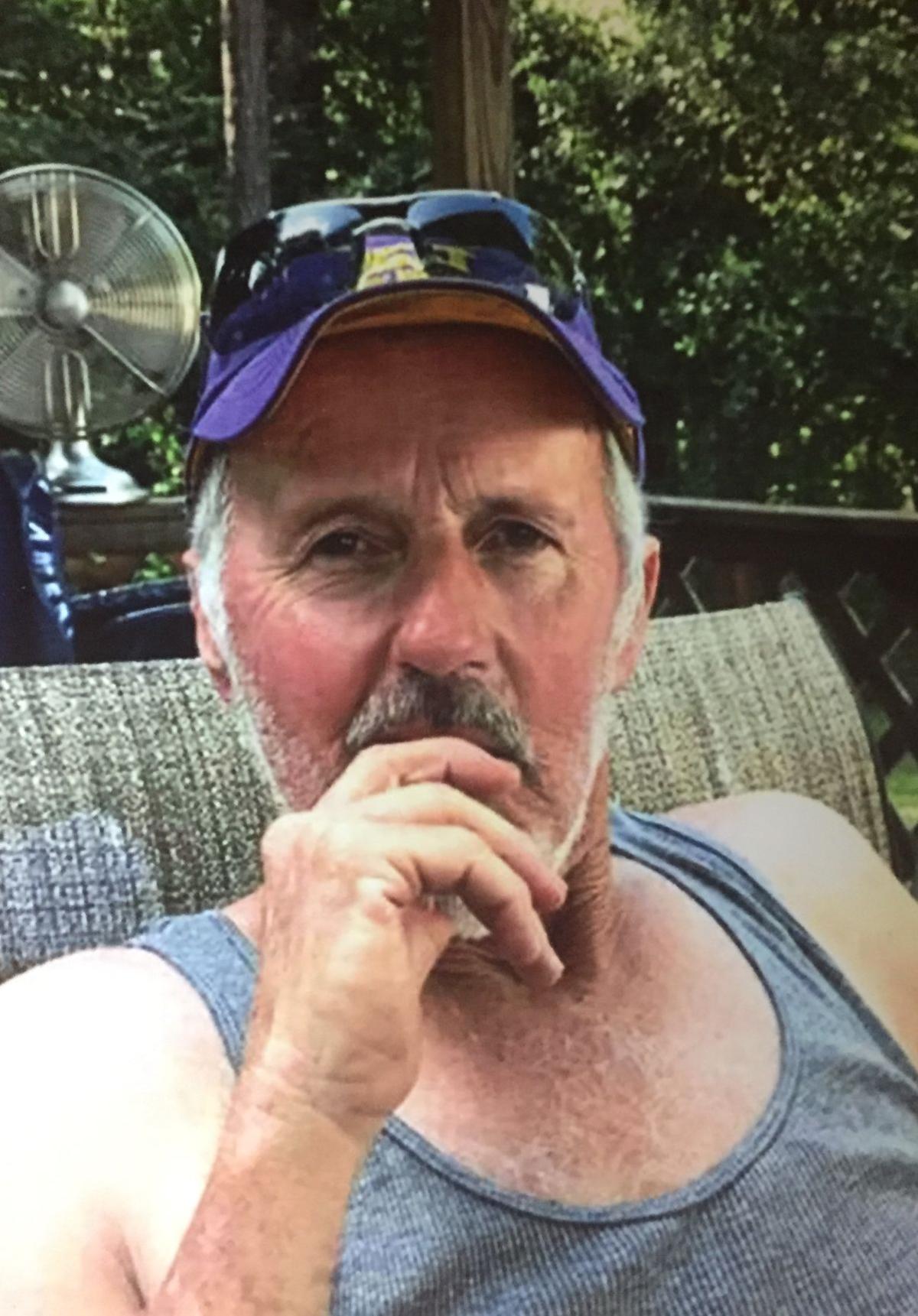 Ryan Sharpe, 36, of Clinton, is escorted by East Feliciana Parish Sheriff's Office deputies into a hearing, Tuesday, Nov. 28, 2017 at the East Feliciana Parish Courthouse in Clinton. Sharpe was arraigned on charges of second-degree murder in the shooting death of Tommy Bass, and attempted first-degree murder in the shooting of Buck Hornsby, who survived.

A man accused of killing three Clinton-area men last year told investigators he shot them because — as though he were deer hunting — he was "filling five tags" the government had issued him, court filings show.

Ryan Sharpe, who on Tuesday was ruled incompetent to stand trial, told authorities he had killed a deer that was worth two of the tags but the three remaining tags had to be used on humans, according to a report of Sharpe's Oct. 12, 2017, confession. The document was filed with the East Feliciana Parish Clerk of Court.

A judge in East Feliciana ruled Tuesday that alleged serial killer Ryan Sharpe is not competent to stand trial, a decision that will halt crim…

Authorities say Sharpe confessed to each shooting and he gave a hauntingly similar description to authorities for how he selected the victims, drove toward them and watched them get hit by his bullets before driving home.

"Sharpe stated he killed the victims because he was filling five tags … given to him by the State Police and the Federal Government," the narrative written by the East Baton Rouge Sheriff's Office says. After explaining two tags had been used on a deer he killed, Sharpe told authorities, the three remaining had "to be used on humans," the report says.

"He concluded by saying the reason he didn't kill Hornsby is because he didn't want to waste a tag," the last line of the narrative says.

In Louisiana, the Department of Wildlife and Fisheries issues deer tags to hunters to track and limit the number of deer killed.

"I'm not justifying what he did, but he's clearly not mentally stable at all," said Collette, who dated Sharpe for about two years until their breakup in October 2016.

She said that when she dated and lived with Sharpe, she did not notice anything concerning about his behavior. Since his arrest, she said, he has seemed completely different as she visited him in-person and on the phone.

Sharpe's attorney, Tommy Damico, said he is looking into whether his client could have been affected by brain injuries. Collette and another friend of Sharpe’s interviewed by investigators said he suffered head injuries in a May 2015 bar fight. In a separate interview with investigators, Sharpe's father, Bill Sharpe, said his son injured his head in a bad vehicle crash about eight years earlier.

Collette noted Sharpe found out the week before the first shooting — in which Bass was killed in July 2017 — that she had married another man in Texas. Sharpe's father also noted that to investigators in his interview, saying he informed his son about the marriage, court records show. The Advocate reported in October 2017 that investigators were looking into that incident as a possible motive, but it's not clear if anything became of that theory.

Investigators looking into new information about what led a Clinton man to allegedly shoot four people, killing three of them, say his motive …

Other interviews with Sharpe's family and friends characterized him as a gun-wielding hunter and plumber who often told far-fetched stories. Some mentioned how he had struggled with drugs and often drank heavily. However, almost all those interviewed mentioned how Sharpe had been acting more strange in the year or two before the shootings.

Two friends told investigators that Sharpe had recently started closing the gate to his home, which he hadn't before, and many were worried he was doing hard drugs. Collette said he had almost completely stopped working in the months before the shootings, when previously he had worked as a plumber.

Sharpe's sister told investigators that the night before he was arrested she texted him, worried about the shootings in the area, and Sharpe responded that it was "getting close to hunting season and deer hunters get trigger happy," according to a record of the interview filed in court. Another friend told investigators a similar story.

Collette noted that Sharpe's comments about deer hunting seemed particularly off because he was never a big deer hunter; she said she can remember him hunting deer only once. She said he was primarily a rabbit hunter.

It was clear from the narrative that Sharpe had known, at least in name, Hornsby. Sharpe told authorities he observed "a subject known to him as Buck Hornsby exercising" along La. 63, the report says. Investigators said Sharpe passed by several times before slowing down and shooting Hornsby. Sharpe said he watched the man fall, then get up and run away.

Sharpe did not know Breeden. The narrative says Sharpe had seen "an unknown male subject wearing a green colored shirt working in his front yard" while driving on Pride-Port Hudson Road. Again, Sharpe passed by several times before slowing down and shooting twice from his car. He told authorities he saw Breeden fall to his knees then onto his side, the report says.

The narrative was not clear on whether Sharpe knew Bass and DeFranceschi.

Sharpe admitted to authorities he pulled into Bass' driveway while the man had been working on his truck. Sharpe got out of the truck with a shotgun, walked up to Bass and shot him from a close range, the report says. Sharpe then returned home, and when he noticed the shell casing in the bed of the truck, he burned it in a fire pit in his yard, he told authorities, according to the report.

This was the only case where Sharpe drove his pickup truck and exited the vehicle — in the rest, he told authorities, he drove his girlfriend's white Nissan Altima and committed drive-by shootings.

Ryan Sharpe, a 36-year-old Clinton man accused of a series of shootings in East Feliciana Parish that killed three and wounded another, was ar…

Sharpe told authorities he saw DeFranceschi weed-eating near the road, and again he made several passes, then slowed down and fired at the man. Sharpe said he missed once, but fired again and saw the man fall onto his back, the report says.

The court filings also report in detail how Sharpe first became a suspect in the cases, when he called in directly to the East Feliciana Parish Sheriff's Office, which The Advocate reported in October.

Sharpe called on Oct. 10, 2017, about 7 a.m. to the East Feliciana Sheriff's Office, claiming responsibility for the slaying of DeFranceschi, which had happened a day earlier, reports say. He said he "had some business to take care of and after he did he would probably turn himself in," according to a report from State Police filed into court records.

Despite no caller ID available from the first call, detectives found two numbers for Sharpe and tried to call him back, but got no answer, the reports say. But about 10 minutes later, Sharpe called again, and again admitted to the homicide in Clinton.

After Sharpe was arrested, detectives found a .351-caliber rifle at his home through a search warrant, records show. The two shell casings found separately at the shootings of Breeden and DeFranceschi, which were matched by ballistics, were also determined to have matched that rifle from his home.

The criminal case against Sharpe in East Feliciana was halted Tuesday after a judge ruled he was incompetent to stand trial. No rulings have been made on Sharpe's mental state at the time of the alleged crimes.

Doctors tasked in the criminal case in East Baton Rouge have still not ruled on his mental capacity, but that hearing is set for next week.

For a morning she knew would be difficult, the wife of Brad DeFranceschi — one of four men authorities say was shot by alleged serial killer R…