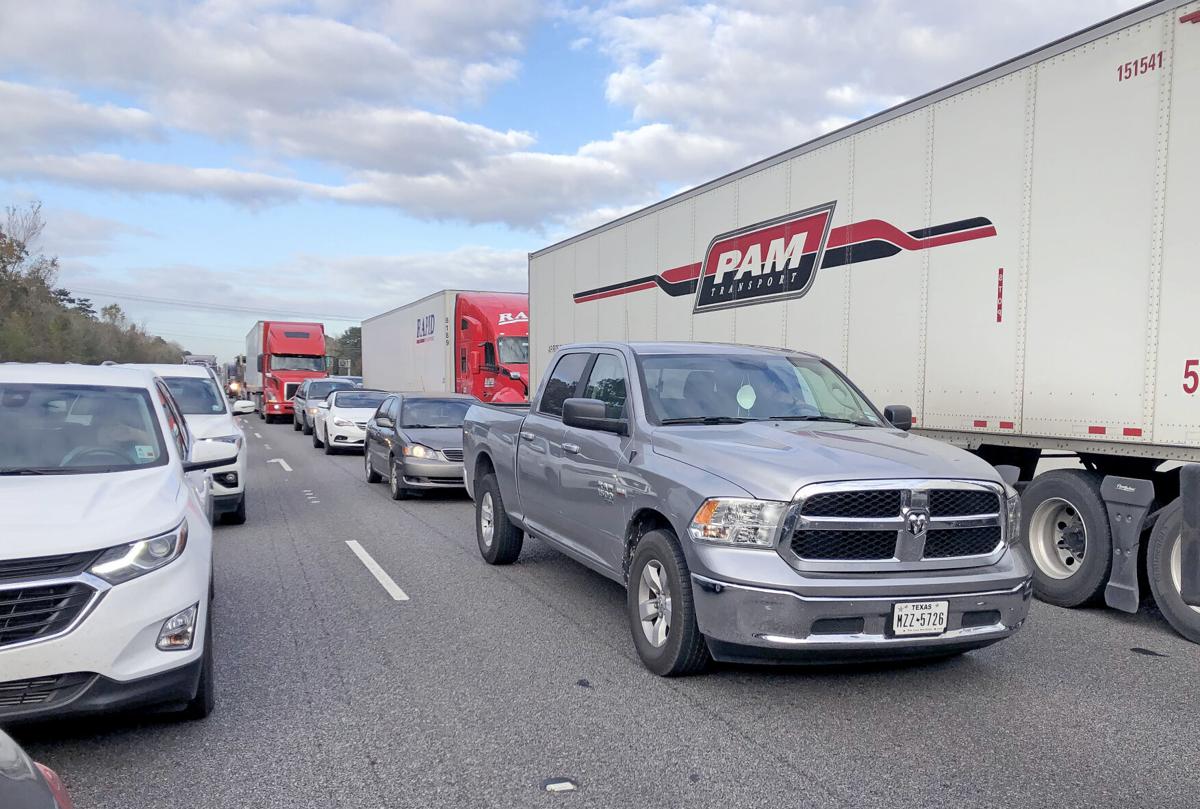 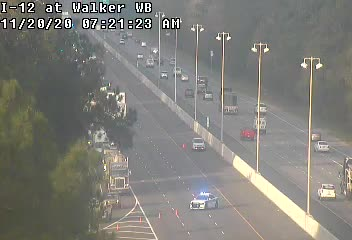 The eastbound lanes of I-12 were closed at Walker on Friday morning, Nov. 20, 2020, after a fiery crash with tanker truck and a Louisiana State Police vehicle. (Image via DOTD traffic camera)

The eastbound lanes of I-12 were closed at Walker on Friday morning, Nov. 20, 2020, after a fiery crash with tanker truck and a Louisiana State Police vehicle. (Image via DOTD traffic camera)

A tank truck hauling gasoline along Interstate 12 early Friday blew out a tire and careened into a state trooper looking for speeding drivers, sparking a fire that shut down eastbound lanes for about six hours and snarled traffic throughout the morning rush hour.

The trooper and the driver of the 18-wheeler suffered "moderate" injuries and were taken to hospitals, state police spokesman Trooper Taylor Scrantz said.

Both eastbound lanes of I-12 were blocked at milepost 19, just past the Satsuma exit, as crews worked to clear the scene, police said. Traffic was diverted to U.S. 190 via La. 447 at Walker, and snaked through the town's busy business district.

While some people lived relatively close to the scene, there was no evacuation order or shelter in place order, Scrantz said.

Video posted online from near the scene showed flames reaching into the sky as high as the tops of pine trees that line both sides of the interstate.

Christine Armentor, 32, said she and her husband were in bed when they heard a bang from the crash at 4:15 a.m. before a louder noise that also awoke one of her two daughters.

"(My husband) walked to go out front, then he called for me and said 'you need to come look,'" Armentor said. "When I went out there you could see flames over the tree line. ... But then while we were watching, it exploded again."

The couple went back inside after the second fireball while embers landed in their front yard roughly 100 yards away from the interstate.

Armentor said officials told her there was no need to evacuate. She noticed she couldn't see the fire anymore around 5:45 a.m.

WBRZ reported a trooper was on the middle shoulder of I-12 with the vehicle's emergency lights on while using radar to enforce the speed limit.

The driver of the 18-wheeler started to switch lanes when a tire blew, causing the driver to lose control of the tanker, the station reported, citing police. Scrantz said the 18-wheeler crashed into back of the trooper's vehicle.

It wasn't clear whether the tanker exploded or caught fire after impact. In a reply to the State Police Facebook post, a resident about 7 miles away from the site said she felt the crash. WAFB interviewed a woman who said she felt small explosions and then a larger one, but she did not say how far she was from the crash site.

State police are investigating if there was an explosion, Scrantz said.

Louisiana Department of Transportation and Development spokesman Rodney Mallett said the interstate was reopened around 10:15 a.m. after inspectors deemed the roadway safe for drivers.

Here's video of the fire posted on social media:

@ashleywbrz Video of explosion moments after off of Satsuma pic.twitter.com/6Dz8btCZ1E