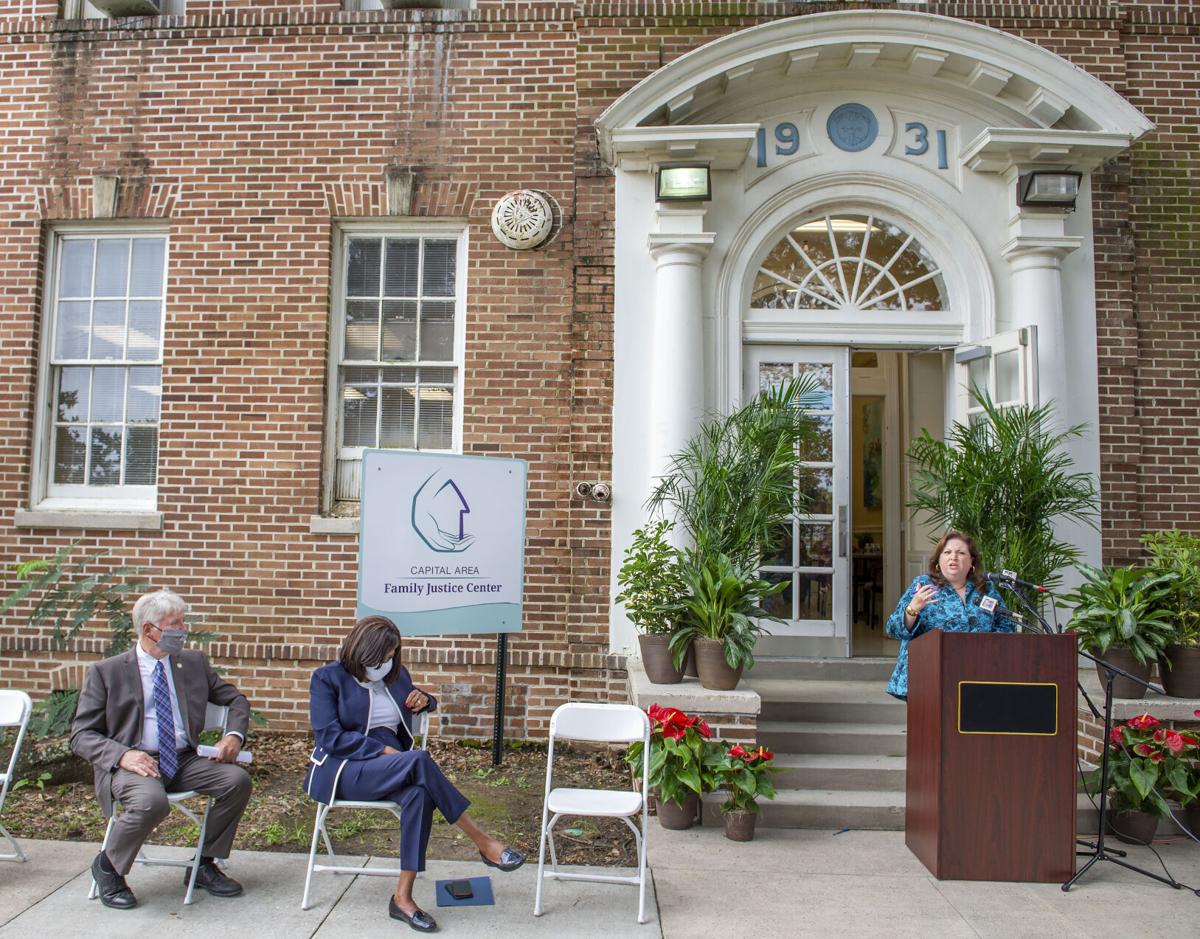 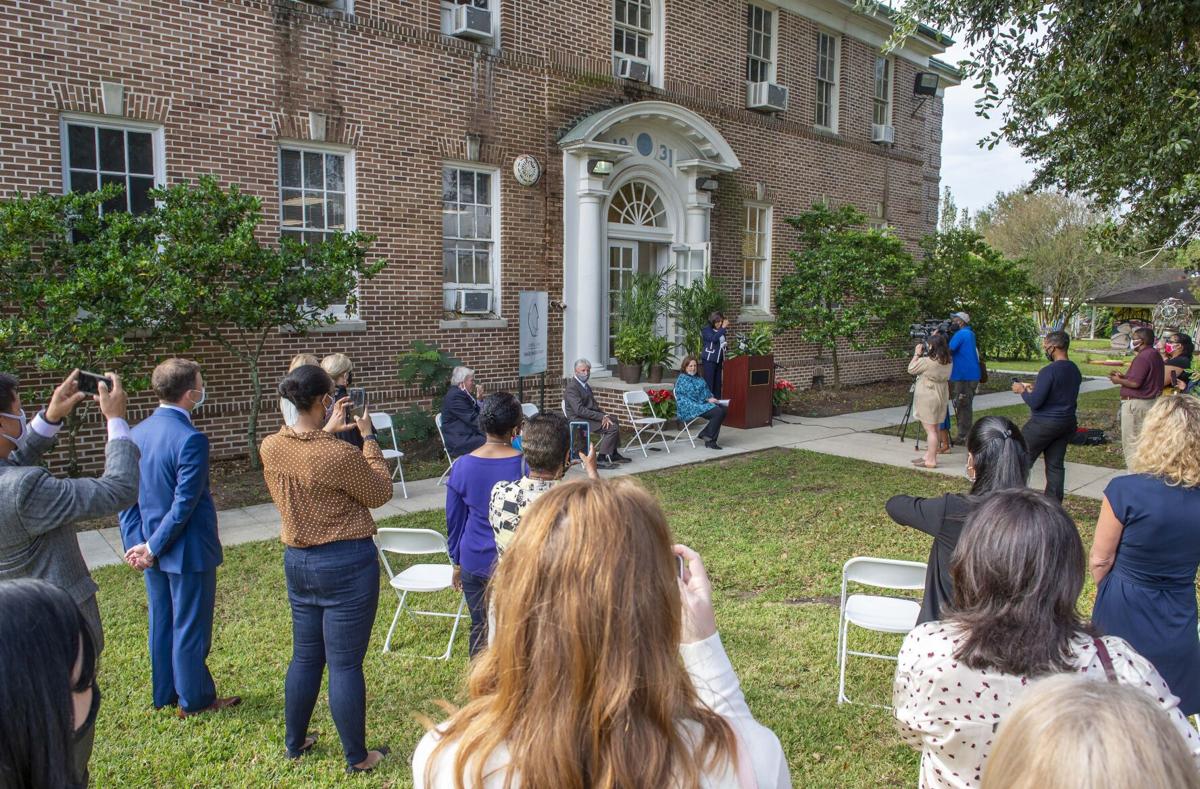 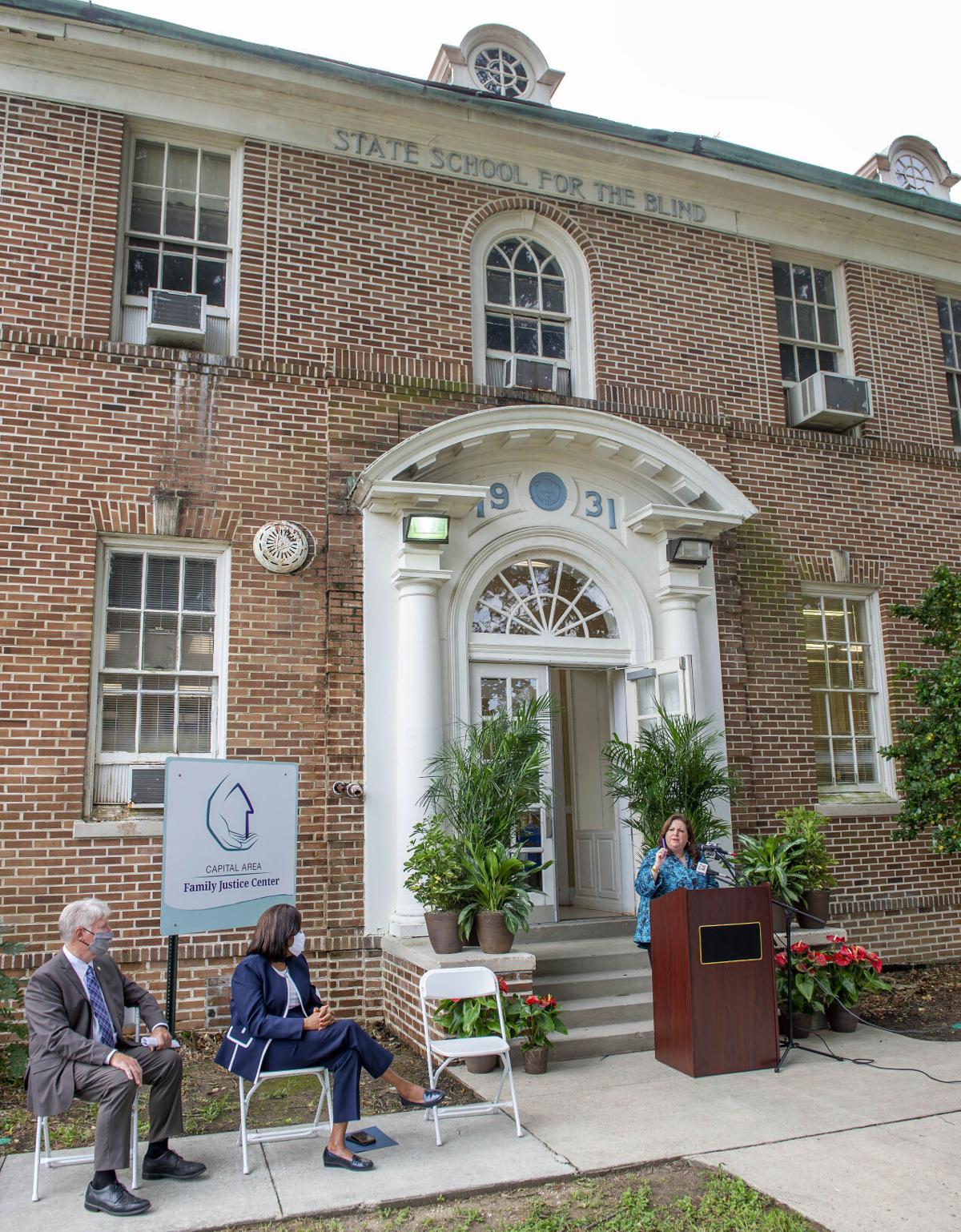 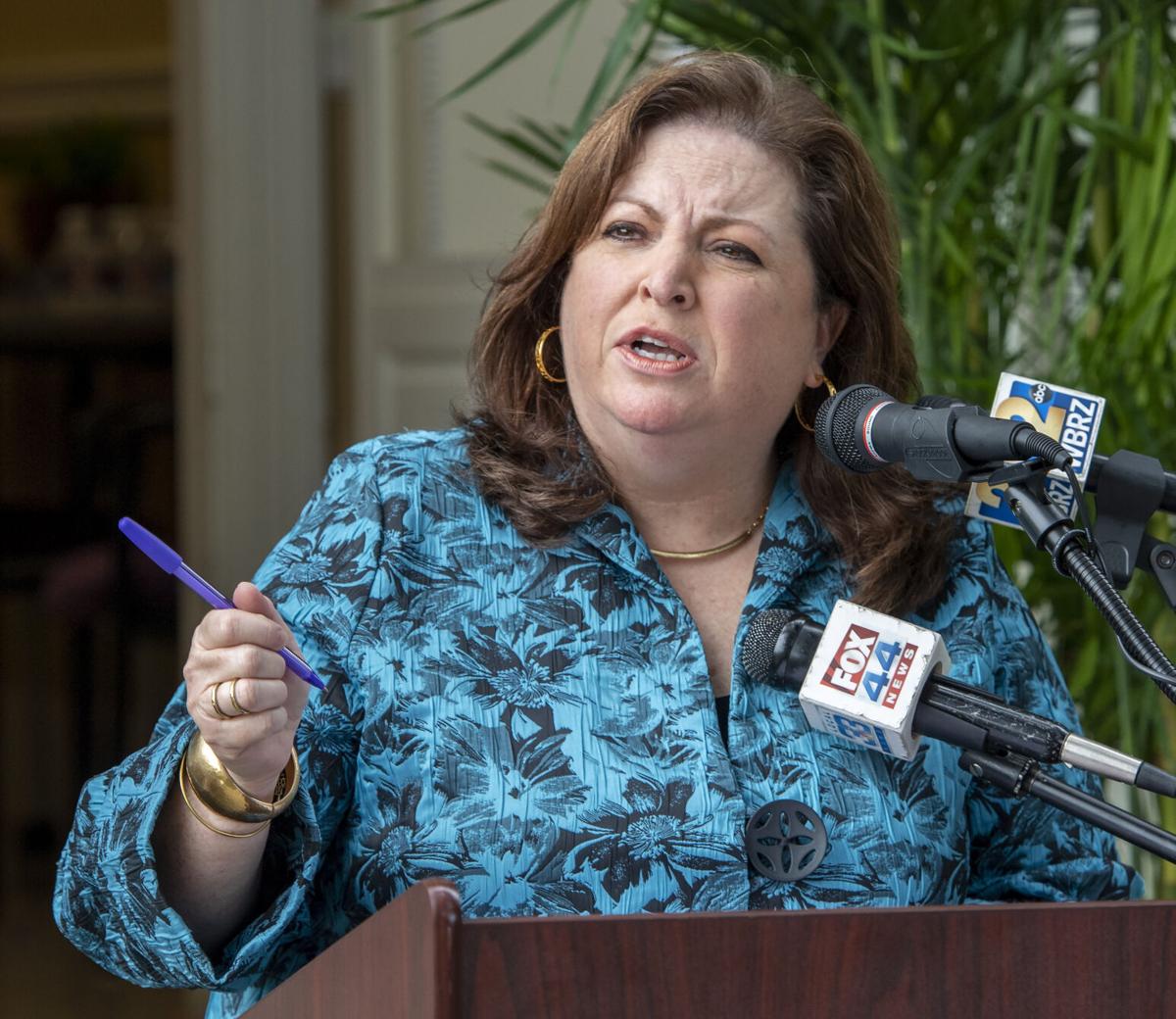 Executive Director Renee Craft makes a point while speaking at the lectern during the dedication of the Family Justice Center located at 1120 Government Street opens Tuesday Oct. 27, 2020, in Baton Rouge, La. 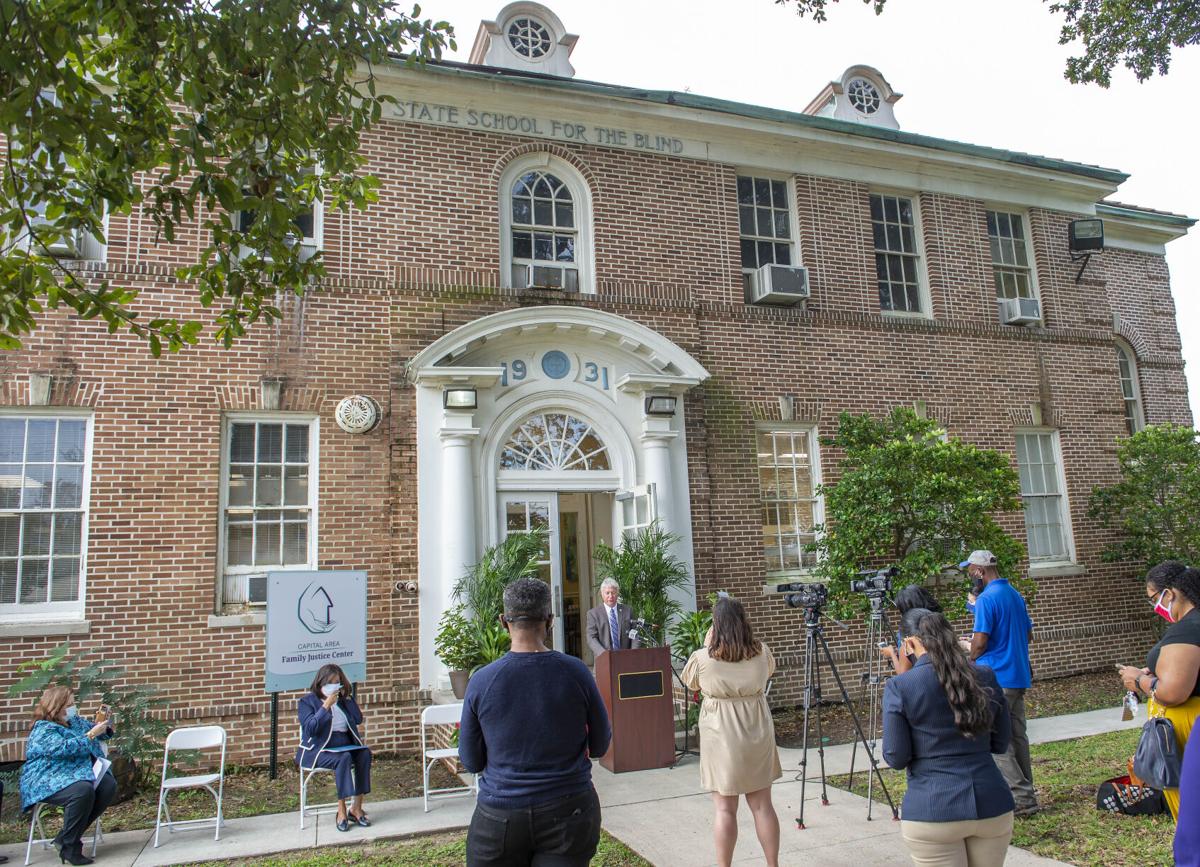 Executive Director Renee Craft makes a point while speaking at the lectern during the dedication of the Family Justice Center located at 1120 Government Street opens Tuesday Oct. 27, 2020, in Baton Rouge, La.

The Capital Area Family Justice Center, which will provide a "one-stop shop" for victims of domestic violence in East Baton Rouge and surrounding parishes, has officially opened its doors.

Two years after a portion of criminal justice reform savings were allocated to the parish for a victim services center, various agencies and advocates have joined forces to provide assistance to survivors seeking help, all under one roof.

Louisiana reserved $8.5M of criminal justice reform savings for improvements; here's where it will go

Louisiana leaders announced Wednesday their plans for spending much of the $8.54 million earmarked from criminal justice reform savings, with …

The center opens amid heightened domestic violence rates and intimate partner homicides in the parish this past year. Already 744 victims have filed for a temporary restraining order in family court; 201 have received permanent orders, according to the District Attorney's Office.

Officials and advocates hope the center will help curb some of the violence by providing an easy avenue of support for victims.

"Too often when serving those in need, those who are already so incredibly vulnerable, those who have already been through so much, we inadvertently add to their burden by sending them to another service provider across town, then another, and another," said Renee Craft, the executive director of the center.

Law enforcement agencies, including Baton Rouge Police and the East Baton Rouge Sheriff's Office, will work with advocacy groups to provide resources and legal services in a single location on Government Street.

Placing these agencies and groups in one location will ideally prevent further trauma, according to John Price, the executive director of The IRIS Domestic Violence Center.

"[Victims] have to tell their story 10 times sometimes," he said. "By putting everybody in a one-shop area, it stops re-victimizing that victim, because every time they tell their story they're reliving it."

As homicides continue to rise in East Baton Rouge Parish during the coronavirus pandemic, the city government is using federal funding to find…

Price said survivors will no longer have to navigate a "maze" of services providers, figure out transportation or worry about child care for multiple visits from one location to the next.

"It takes energy, effort and courage in order to seek out those services, and if you can't, especially in a pandemic, if you're living with your abuser, it's really difficult to find opportunities to even report abuse," he said.

Inside the old brick building on Government Street, most of the cushions and accent decorations are purple, the color for domestic violence awareness. This is only one building in a sprawling complex that all relate to violence prevention, stretching further back into the adjoining neighborhood.

A plush sofa with pillows in cool, calming tones is located beyond the intake desk, and a children's play area connects to the waiting room for victims who bring their children. Large "Geaux Bags" filled with pillows and supplies for kids assigned to foster homes sit in the corner, ready for use. Signs affixed to each door show different advocacy groups and law enforcement agencies.

District Attorney Hillar Moore III said that the Stop the Loss initiative, which aims to identify domestic abusers and intervene before there is another assault or death, will also be a part of the center. The plan is to serve all kinds of victims, he said, from those seeking shelter to those who are afraid to or unable to leave their abuser.

“The Family Justice Center creates an opportunity to assist victims not only of physical abuse, but also victims whose entire lives are controlled by their partners,” Moore said.

Sharon Weston Broome said the center will "assist victims in reclaiming their lives." She pointed out the extreme isolation and disconnectedness amid the pandemic that has left many victims of abuse feeling hopeless.

"Domestic and dating violence know no boundaries," she said.

The center will serve those in East Baton Rouge, Ascension, East Feliciana, Iberville, Pointe Coupee, West Baton Rouge and in Livingston who are closer to the Baton Rouge center than they are to a different service location.

While some law enforcement are already located in the building, the plan is to include sheriff’s offices from parishes the center serves alongside smaller law enforcement agencies in East Baton Rouge.

Davyon Bentley was already on the run, accused of invading an ex-girlfriend's home, when he shot and killed a different ex-girlfriend Wednesda…

A Baton Rouge man is under indictment in the June 6 stabbing death of his girlfriend at a Jefferson Highway apartment they shared.