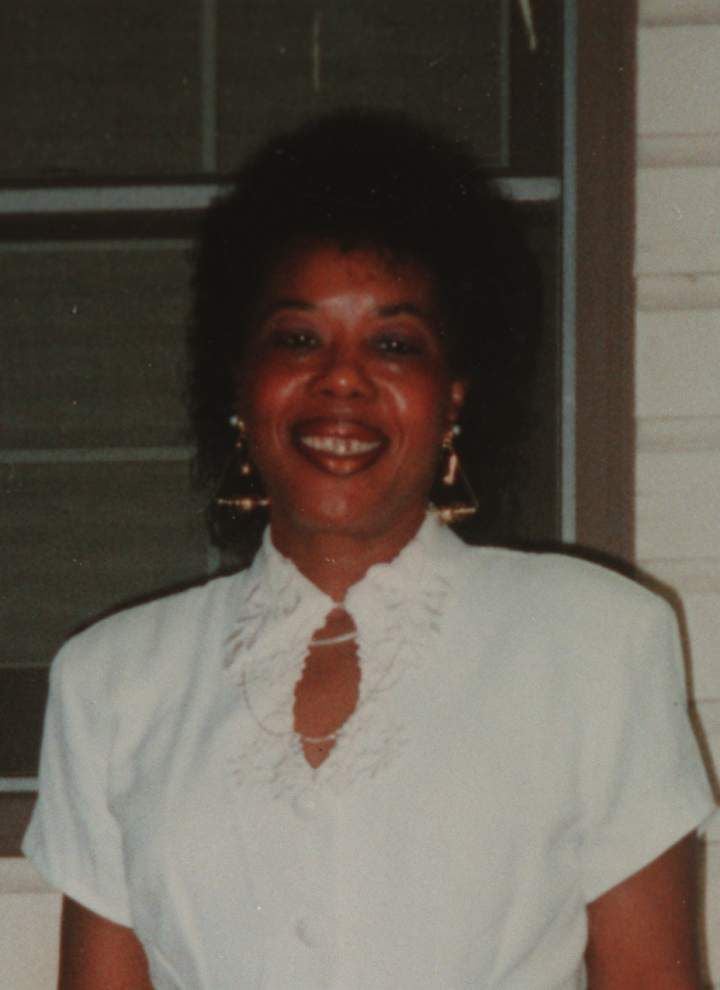 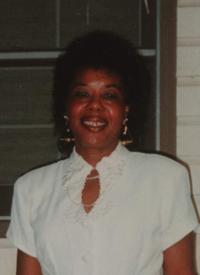 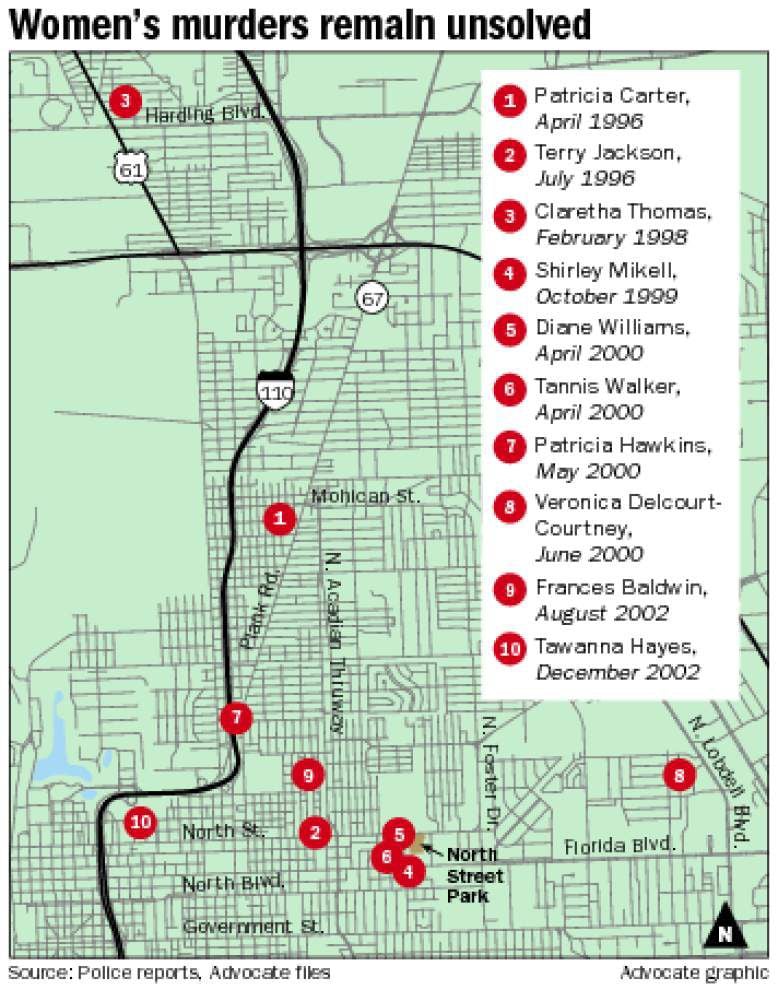 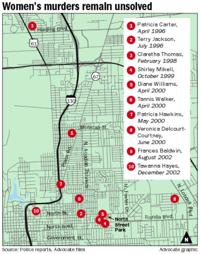 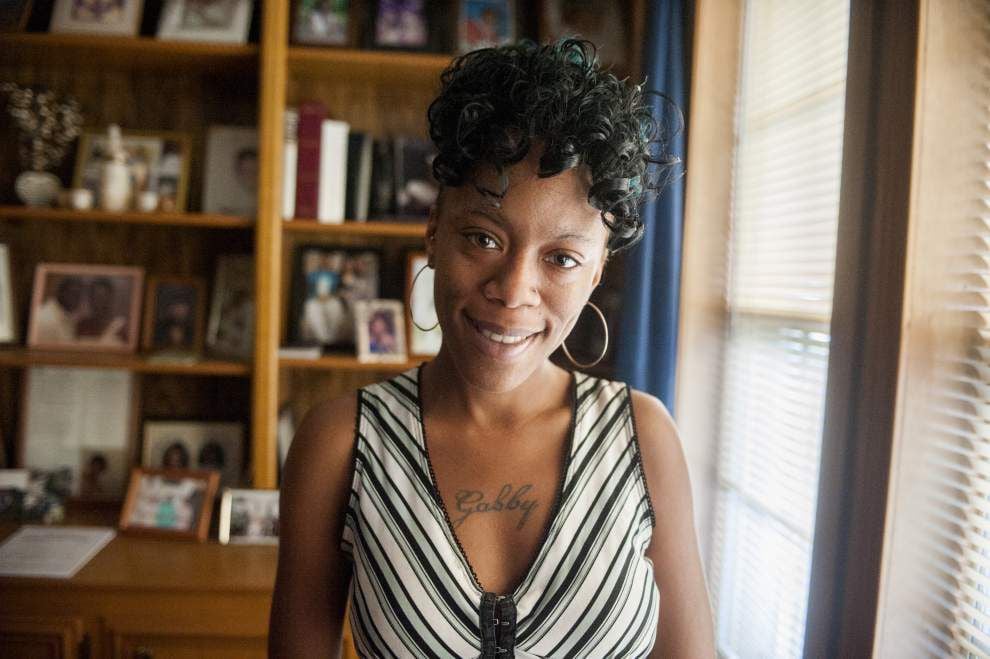 Advocate staff photo by ANGELA MAJOR -- Gabrielle Williams has been keeping contact with police officers about the murder of her mother, Diana Williams, on Saturday, Oct. 11, 2014, which would have been her 50th birthday. The case of her murder in 2000 remains unsolved. 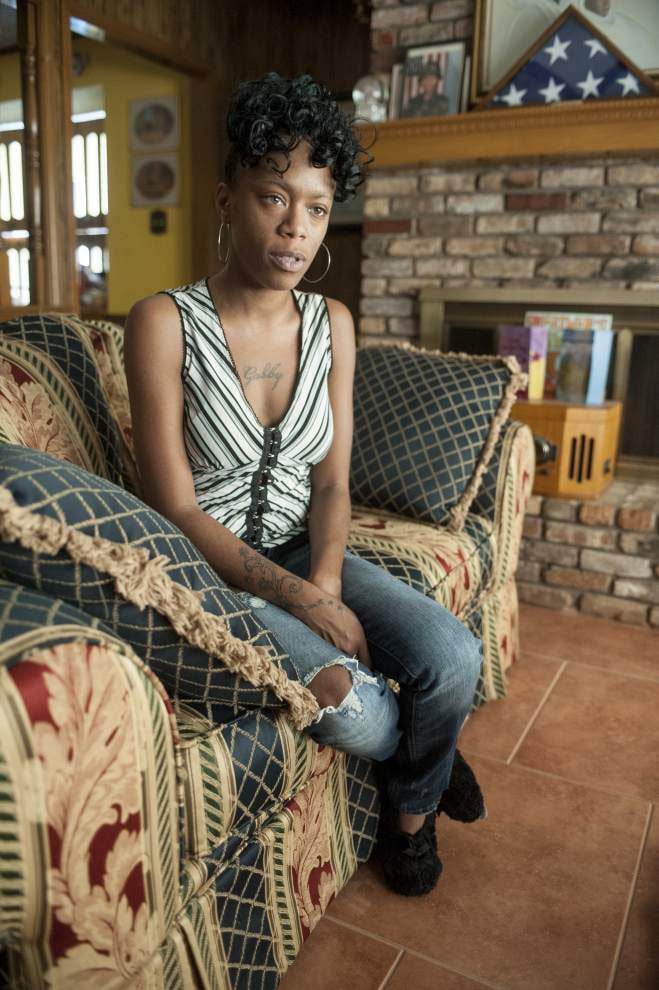 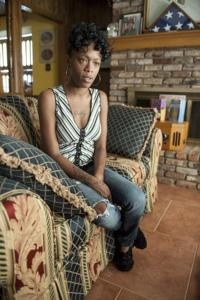 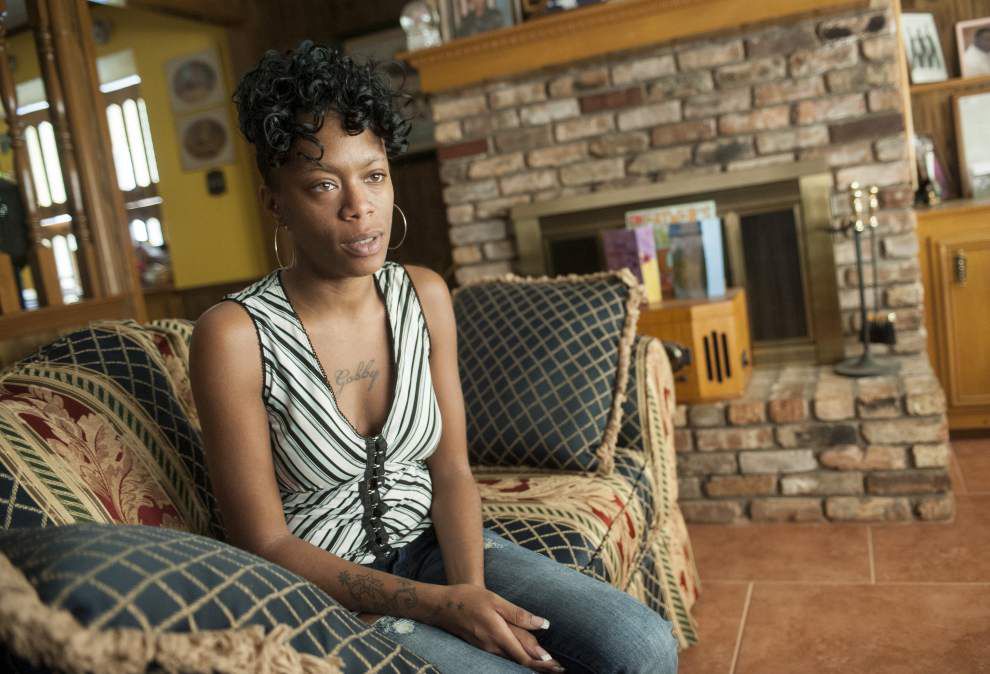 Advocate staff photo by ANGELA MAJOR -- Gabrielle Williams has been keeping contact with police officers about the murder of her mother, Diana Williams, on Saturday, Oct. 11, 2014, which would have been her 50th birthday. The case of her murder in 2000 remains unsolved.

Diana Williams’ family suspected she worked the Baton Rouge streets as a prostitute in the late 1990s.

That’s not how they remember her now, focusing instead on the outgoing woman who cooked for her mother or recalling her skills at the pool table.

In early 2000, however, the 35-year-old Williams was in a dark place. She had begun using crack cocaine, would disappear for days at a time and was drinking more.

The last time she disappeared, her family waited three days before reporting it to police. They weren’t sure whether she was missing or living elsewhere while working the streets.

But she didn’t come back. On April 13, 2000, a person strolling on a footpath at the edge of North Street Park spotted Williams’ nude body. She had been beaten and strangled, her body left in a posed position.

Williams is one of 10 women killed between 1996 and 2002 whose deaths have stumped investigators for well over a decade.

The cases have similarities: Each woman was beaten or strangled, or both. They were found partially or completely nude a day or more after they were killed. Five of the 10 bodies were found within a mile of North Street Park.

All but one were known prostitutes, and at least seven of the bodies were “posed” in a particular way, though police won’t describe how.

“We feel really confident that the vast majority of those were committed by the same person or the same persons,” said Baton Rouge police Detective John Dauthier, a member of a cold-case homicide team that has been taking a fresh look at the deaths.

The deaths have come under scrutiny before. In the late 1990s through the early 2000s, the bodies of nearly 20 other women were found across the capital city. The women fell roughly into two groups: those from stable middle- or upper-class homes and those living what police called “high-risk lifestyles.”

By 2004, two men had been arrested, each accused of being a serial killer: Derrick Todd Lee in 2003, and Sean Vincent Gillis in 2004. Gillis is thought to have killed eight women, while Lee was connected to seven women, including many of the victims who dominated headlines during that time period. In 2009, Baton Rouge police arrested a third suspected serial killer, saying they had evidence linking Jeffery Lee Guillory to the murders of three women from 1999 to 2002.

All were convicted of murder and are in prison, with Lee on death row.

While the three slayings blamed on Guillory occurred in the same general area as several of the unsolved cases, authorities could not tie him to any of those killings. Likewise, investigators say no solid evidence connects Lee or Gillis to any of them.

And even now, after two years of a fresh look by cold-case detectives, the outlook on solving the 10 murders remains grim. Leads have dried up, and DNA is not likely to be the miracle evidence that it turned out to be in so many of the other killings.

“It can be frustrating,” Dauthier said. “When you have this many cases … (and) we have all this information from all these different crime scenes, yet we’re unable to link them together or to anyone else — it’s frustrating.”

Patricia Carter, 25, was the first of the 10 victims. Severely beaten, she died soon after being found in a parking lot on Winnebago Street in April 1996.

Later that same year, in July, 36-year-old Terry Jackson’s nude body was found in a vacant lot about six blocks from BREC’s North Street Park. She had been strangled.

About 1½ years later, in February 1998, 47-year-old Claretha Thomas was beaten to death in her kitchen.

Another year and a half had passed when Shirley Mikell, 33, was found in October 1999 just yards from the south end of North Street Park, behind a Florida Boulevard restaurant. She died from blunt-force injuries to her head.

About five months later, on April 13, 2000, Diana Williams’ body was found near the park.

The body of Tannis Walker, 36, was found four days later in the same general area. She also had been strangled. Williams and Walker had been high school classmates.

The next month, Patricia Hawkins, 39, was found in a patch of bushes behind an empty business on Plank Road, just feet from Interstate 110.

About two years later, Frances Baldwin was found dead in her Progress Street home in August 2002. Baldwin, 47, was not a prostitute, but police include her case for its other similarities — she was nude, posed and had been beaten as well as strangled.

Later that year, in December, Tawanna Hayes, 29, was found naked, choked to death and lying out in the open on North 14th Street.

Of the 10 victims, only Williams’ family could be found to talk about the killings. Her family members are devastated by the lack of progress in the case. Some worry that Williams’ lifestyle might be the reason that police haven’t solved it. They suspect that, especially in the early stages of the investigation, detectives didn’t work the case hard enough.

“I still have so much anger,” said Williams’ daughter, 25-year-old Gabrielle Williams. “I think everybody did it. I just want to be able to sit there and have that trial. I deserve that as a person. Prove to me that you care. That she wasn’t just a drug addict, that she was a human being.”

But Greg Phares, who was police chief at the time some of the bodies were found, says his officers did pursue the cases and were frustrated by their lack of success in solving them.

“You can ask any homicide detective, and they’ll tell you they are passionate about speaking for those who can no longer speak for themselves,” Phares said. “It doesn’t matter whether the victim is in the Junior League or what their lifestyle was, they’re human beings and it’s your duty to speak for them and solve the crime.”

The Baton Rouge Police Department created a task force in June 2000 that focused on women killed near the North Street Park.

“When you looked at the geographical closeness of the crimes and the closeness of the timeline, it will suggest to even an old cop like me that it could be one person operating,” Phares said.

Phares said he put his best detective on the task force along with other officers. But, ultimately, they were unable to link all of the killings and made no breakthroughs in any of the cases.

Now the investigation has fallen to Dauthier and his fellow cold-case team members.

One might think that with so many similar deaths, police could find a way to at least establish they are linked.

But investigators point out that hurdles stand in the way, not the least of which is DNA.

Not a single piece of DNA evidence collected from each scene confirms that any two of the cases are related.

“A lot of work has been done on those cases,” said Joanie Brocato, head of the State Police Crime Lab.

The lab still checks a national database weekly to see if any DNA matches can be made to newly entered evidence, which could point investigators to a suspect.

Despite the ongoing effort, Brocato said, no proof has been found that a single killer is responsible for more than one of the killings.

“We just haven’t been able to show that with physical evidence,” she said.

That doesn’t mean that a critical piece of DNA evidence never existed on any of the bodies. It’s just that DNA collection can be hit or miss.

The technology was fairly new to the parish in the early 2000s, and the accepted processes for collecting it were not nearly as exacting as they are today, said Ike Vavasseur, a former Baton Rouge police homicide detective who investigated some of the deaths.

Investigators say the lack of results isn’t for lack of trying — the killings happened about the same time as most of the other deaths that were ultimately linked to one of the three convicted killers — Lee, Gillis and Guillory. In the early 2000s, police didn’t know which deaths were related and which ones weren’t.

“We were working all of them together,” Brocato said. “Now we’re left with these. There’s no repeating pattern like those produced.”

The 10 targeted cases have proved challenging for another reason, investigators say — almost all the victims led “high-risk” lifestyles as prostitutes.

While police emphasize they don’t want to blame the victims for living the way they did, they also note that prostitute killings are among the most difficult to solve.

Prostitutes are likely to be estranged from their families, which means fewer people know of their movements, Dauthier said. The only others who are likely to have seen them, besides clients, are fellow prostitutes.

And perhaps most challenging is that prostitutes regularly encounter strangers in private spaces with few or no witnesses. Any evidence found on the body could lead to the killer — or to a client, Dauthier said.

That is what happened recently. When State Police retested all of the evidence in the 10 cases, investigators developed a potential suspect. But in an interview with police, that man said he had been the woman’s client. Police had no evidence that could prove otherwise, and he was let go, Dauthier said.

Two of Williams’ sisters, Ora and Sheila Williams, note that when they went to the crime scene after their sister’s body had been taken away, they saw an undergarment that belonged to Diana lying just feet from the crime-scene tape. Ora Williams said she picked it up with a stick, placed it in a plastic zip-close bag and gave it to a detective that day.

“They weren’t hidden,” Sheila Williams said. “They were in clear view.”

“We worked hard on these,” Cochran said. “It didn’t matter who the person was. We did our best.”

As for the underwear, Cochran said police were searching through a heavily wooded area at night, and it’s possible to overlook things.

Vavasseur, the former homicide detective, acknowledged that living without answers can be emotionally taxing.

“It’s absolutely horrible for a family to live in that anguish,” he said. “They don’t want answers six years from now. They want answers now. And to speak to them today, this many years later and then not have an answer, I certainly can’t deny them feeling that way.”

Sheila Williams said she has her own ways of remembering her sister. She still wears a necklace with her sister’s name on it and releases balloons every year on Oct. 11, her sister’s birthday.

“I can’t say that I’ve given up hope,” Sheila Williams said. “I hold onto hope that one day we’ll get a chance to see who took her.”

Daniel Bethencourt can be reached at dbcourt@gmail.com.