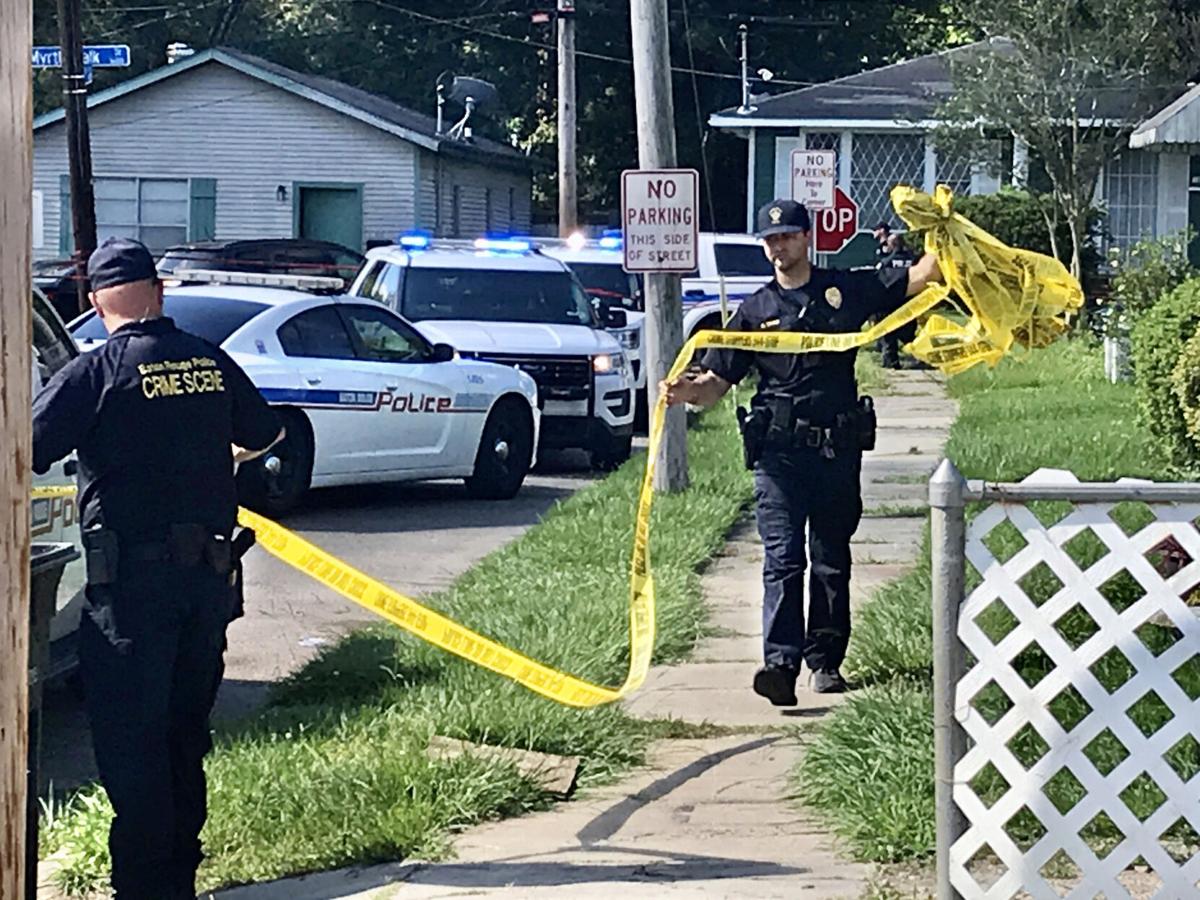 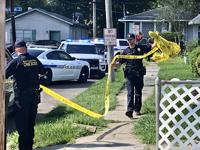 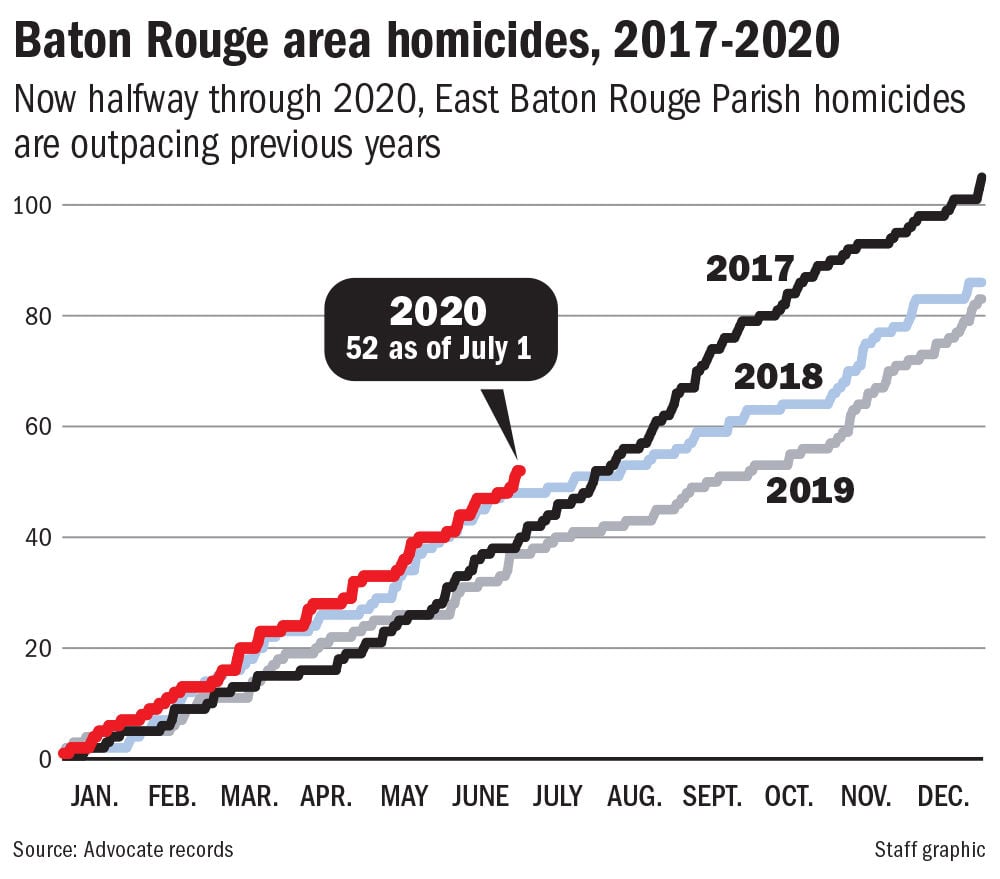 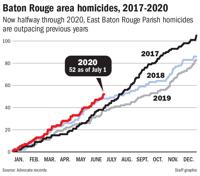 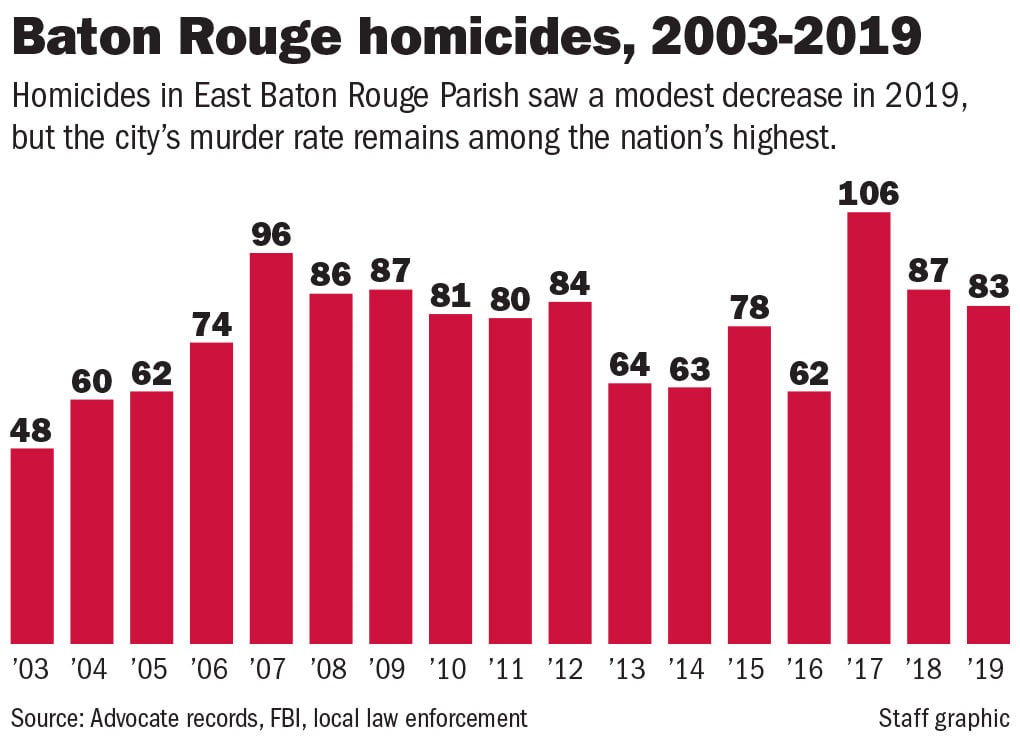 In addition to delivering a global pandemic and unprecedented economic downturn, 2020 is threatening to become Baton Rouge's most murderous year on record.

The parish has seen more homicides during the first half of 2020 than over that same period for each year during the past decade, records show. So far, 52 people have been killed this year, according to records maintained by The Advocate and confirmed with local law enforcement.

Gun violence often surges during the summer months when people are spending more time outside, temperatures are rising and children are on vacation from school. But that surge appears to have started earlier than usual as the coronavirus pandemic has upended normal routines, closed schools and businesses and left many people unemployed and stuck at home.

Local officials are concerned about what the next six months might bring.

Homicides parishwide are up about 40 percent from this time last year, and the murder rate has been increasing in recent weeks, with a dozen killings during the month of June alone — including four people shot to death in the past week.

The Advocate tracks intentional and unjustified killings. Those numbers are based on preliminary information from local law enforcement agencies and could change in the future if certain cases are ruled justified or unintentional and vice versa.

"I'm disappointed in these numbers. June was one of our worst months," Baton Rouge Police Chief Murphy Paul said. "I am worried."

Homicides had been trending down since Paul took office in January 2018, with 87 killings that year and 83 in 2019. He had hoped to continue that decrease and has touted the importance of cooperation from the public in helping police prevent and solve crimes.

Domestic violence has played an outsized role in the 2020 homicides, 10 of which fall into that category, according to law enforcement. That's almost 20 percent, which is significantly higher than usual.

The number of domestic-related killings since January has already surpassed the annual totals for five of the past six years, records show. Domestic killings include those resulting from disputes between relatives in addition to what's called intimate-partner violence.

This is a trend experts predicted from the beginning of the pandemic, warning that stressful conditions and people confined to their homes — in some cases stuck in close quarters with their abusers — could result in more domestic abuse.

In the days following the statewide directive to shelter in place as the coronavirus spreads across Louisiana, local leaders and advocates say…

Baton Rouge law enforcement agencies investigated five killings that were considered domestic-related during the five weeks after Gov. John Bel Edwards issued his order directing Louisianans to shelter in place and to limit travel to essential business. That order was in place from March 23 to May 15.

The domestic homicides during that time included a double-shooting in Zachary that left twin sisters dead at the hands of their stepfather, according to police. A few weeks passed before Ronnie Kato was accused of killing his girlfriend's father during an argument, which escalated when police sought to contact him about that homicide hours later. That's when Kato opened fire on officers, killing Lt. Glenn Hutto and leaving his colleague with serious injuries.

Three more lives were lost to domestic violence within the first week of June, including an LSU grad student whose boyfriend is accused of stabbing her to death and a teenager who was caught in the crossfire during a domestic dispute between his friends.

Officials compared the current surge in violence, including domestic cases, to what happened after the 2016 floods, which devastated entire neighborhoods in the Baton Rouge area and left thousands of people displaced. The months following the disaster saw a gradual increase in violent crime, culminating with the last six months of 2017 when homicides spiked from 40 to 106, making that year the parish's deadliest on record.

Local leaders and some criminologists have cited what's called the "social disorganization theory" as a possible explanation for the 2017 spike. Their reasoning was that the difficult events of summer 2016 — the police shooting of Alton Sterling, the ambush that killed three law enforcement officers and then the August floods — created a chaotic environment that spurred increased violence.

That was after just 62 killings in 2016. The 52 recorded so far this year could foreshadow a repeat of 2017, unless the violence subsides during the next six months.

Paul said his department is taking steps to curb the violence, including increasing its use of crime data to pinpoint where and when officers patrol. However, he noted that several initiatives aimed at building trust with the public — summer camps and sports games where people can interact with police officers in a neutral environment — won't happen this summer because of coronavirus restrictions.

Homicide detectives have also been solving more cases, with an above average clearance rate of about 62 percent and a series of quick arrests. Paul attributes that in part to people coming forward with tips.

"We would like to keep that clearance rate up," he said. "People need to realize that there are consequences."

He noted that overall crime remains down since the start of the pandemic, despite the increase in gun violence and homicides. That's consistent with what other communities are seeing nationwide.

Though comprehensive data isn't available, other cities have also seen a recent increase in homicides over the past several weeks.

John Roman, a researcher who studies crime and economics at the University of Chicago, said that spike followed a dip in March and April when the pandemic was first spreading across the United States, causing business shutdowns and threatening to overwhelm hospitals.

Since states have started reopening and people have emerged in May and June, Roman said, the violence has returned. He pointed to a little "COVID fever" from being pent up for weeks, prolonged unemployment for some people and disrupted routines — in addition to police forces simultaneously stretched thin responding to widespread protests following the death of George Floyd at the hands of Minneapolis law enforcement.

Relocating manpower to the site of protests could leave people in other areas feeling like no one is watching.

"Another thing is that firearms purchases have been astonishingly high," he said. "Just a tiny fraction of those becoming crime guns puts thousands of new crime guns on American streets — something that's not likely to change anytime soon."

Two people were killed and another six wounded Saturday in three different shootings Baton Rouge on the Fourth of July.