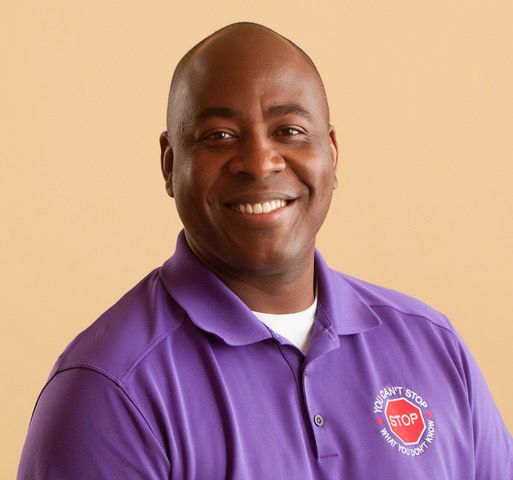 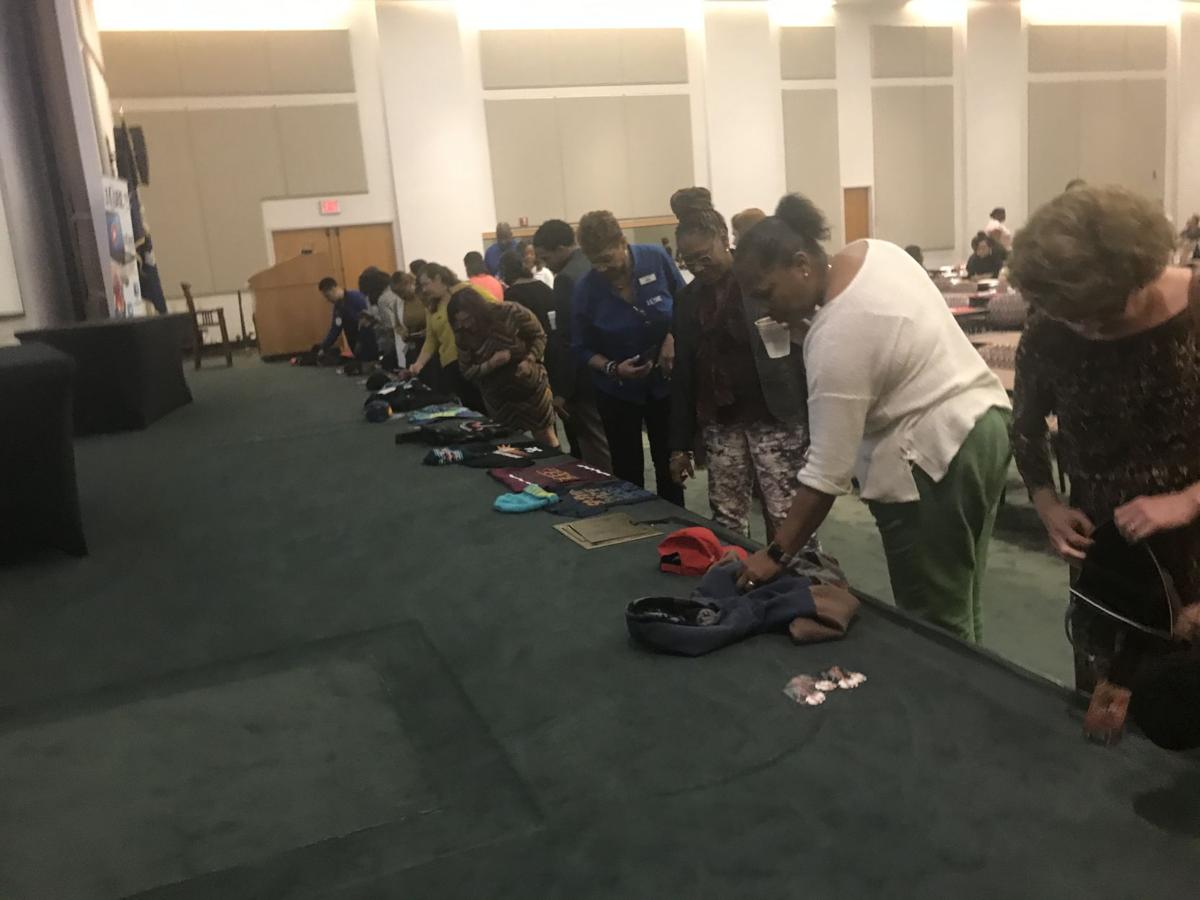 Attendees line up during a break during an drug prevent training to examine current drug clothing and paraphernalia. The training session was held Thursday at the Pennington Biomedical Research Center as part of the annual I Care prevention summit. The featured speaker was former police officer-turned-trainer Jermaine Galloway, who goes by the nickname "Tall Cop."

Attendees line up during a break during an drug prevent training to examine current drug clothing and paraphernalia. The training session was held Thursday at the Pennington Biomedical Research Center as part of the annual I Care prevention summit. The featured speaker was former police officer-turned-trainer Jermaine Galloway, who goes by the nickname "Tall Cop."

The world Jermaine Galloway sees is teeming with drugs, potential drugs and drug references. But it’s a world most other adults fail to notice.

“I want you to see this through your kid’s eyes,” Galloway told a Baton Rouge audience.

Galloway is a 6-foot-9-inch former Boise, Idaho police officer — he goes by the nickname “Tall Cop" — who estimates he trains about 60,000 people a year in alcohol and drug prevention. He spoke Thursday at the annual prevention summit held by I CARE, which provides substance abuse and crisis counseling at Baton Rouge public schools, and on Friday to the Capital Region Transportation Safety Council.

For Galloway, prevention is the best way to keep young people out of prison and not addicted. But the drug world changes fast — “If your last drug training was two years ago that’s too long” — and it can be confusing. So he tries to arm his listeners with enough information so they notice things out of place and then investigate on their own.

On the heels of a week that saw one child killed and two more hurt in shootings in Baton Rouge, law enforcement officials on Saturday spoke to…

Ahead of the sessions, as is his practice, Galloway conducted a “community scan,” visiting a handful of stores in Baton Rouge, taking pictures and video of things he found.

“You’re seeing this in your own backyard guys,” Galloway told a room of more than 200 people attending the I Care summit. “The drug world is showing its hand. And this stuff is 100% legal for any age group.”

He paints a grim picture, detailing the ever more creative, wide-ranging and intermingled array of legal and illegal drugs out there. Marijuana legalization is accelerating that evolution, he said.

Galloway also talked at length about drug culture, showing the audience many examples of drug clothing, ways drugs are concealed, drug paraphernalia as well as logos and other identifiers.

At one point, he showed a series of pictures of seemingly innocuous ballcaps. But they come with a special feature: a hard-to-detect stash compartment meant for drugs. Then he showed similar compartments in certain brands of backpacks.

It was a revelation for much of the audience.

“So when you see a hat, it’s not just an innocent hat, it might be more than just a hat,” marveled Paula Carreiro, a program manager at the Louisiana Center of Prevention Resources at Southern University.

Erin Pourciau-Bradford, director of the I CARE director, had a similar reaction.

“I’m like, ‘Wow, I’ve never really heard of that before,’” she said. “And I have teenage children. So it hit home for me.”

Galloway forbids the audience from taking pictures, audio or video and does not release his slides or the photos and videos he used. He said he used to allow audiences to use more but stopped.

“I was looking at the pages they’re posting (photos) on and there’s kids on there,” he explained. “I’m saying, ‘You just showed a 14-year-old how to do this.’”

For Galloway, some legal drugs can be worse than illegal drugs. They often act similarly to drugs like heroin and meth, but can be difficult to detect. They are sold variously as dietary supplements, mood enhancers, cough syrup, nasal inhalants, etc.

One variety of cough syrup, he said, is so widely available “you can fill up the Buick with as much of it as you want.”

Drug references are common, but adults often miss them.

Galloway played a snippet of “Old Town Road” by Lil Nas X featuring Billy Ray Cyrus. In the lyrics to the popular song there is a casual reference to addictive cough syrup.

“Raise your hand if you downloaded that song and did not know,” Galloway said. Several hands went up.

'It's just everywhere': Louisiana schools struggle to slow vaping use among students

When Nicholas Calico got suspended for three days from his high school in Mandeville for vaping, that didn't convince him to quit.

Galloway also spoke about marijuana and its many variants, saying “it far exceeds everything else.” He said marijuana, once fully studied, may prove to have limited medical benefits, but far less than the broad claims made by its adherents.

“We don’t just throw one drug out there and say it works for 95 things,” he said. “There is no way one drug covers all of those things.”

Moreover, today’s marijuana products are highly potent, with the content of tetrahydrocannabinol, better known as THC , ranging from 25% to as much as 95%. By contrast, a joint from the 60s was perhaps 3% THC.

“No one ever says that Coors Light and Everclear work the same way,” he continued. “The same thing with marijuana. Depends on the concentration.”

He also discussed the fast rise of vaping.

On the heels of a report earlier this week of the first vaping-related death in the state, officials from the Department of Health said a seco…

“Schools pay attention to vapes. It’s all about vapes,” he said. “You don’t know what’s in them."

While news coverage tends to focus on nicotine vaping, Galloway showed how easy it is for kids to switch out nicotine for marijuana, as well as of other drugs and drug concoctions: “Vapes are all interchangeable.”

Afterwards, state Rep. Barbara Freiberg, a former teacher, said the talk was eye-opening and gave her a lot to think about.

“I wish kids were that good in chemistry class,” Freiberg said.