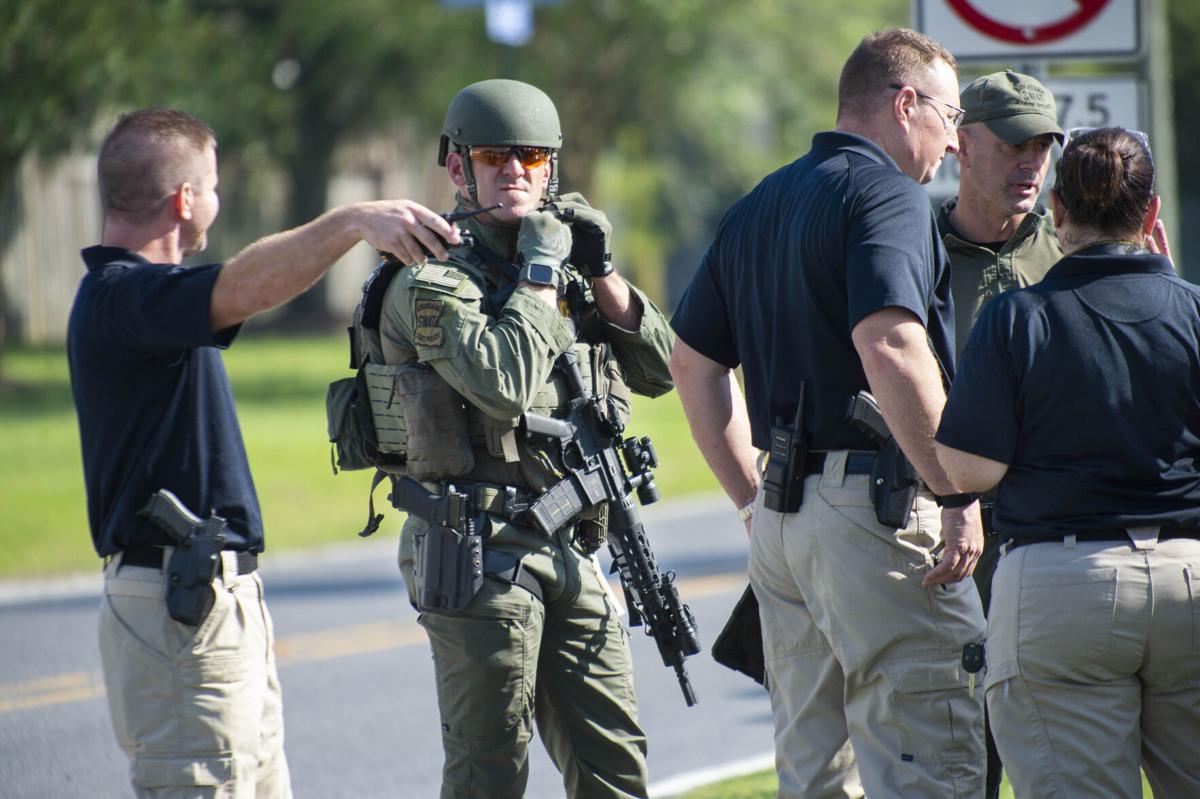 Law enforcement including Louisiana State Police talk shortly before a press conference announcing a subject of interest and possible suspect, Matthew Mire, 31, in several shootings, including at least one fatal, in connection to the LSP officer-invloved shots fired incident later Saturday morning in the area of Hoo Shoo Too Road and Jefferson Highway, Sat., Oct. 9, 2021, after a white male suspect exchanged fire near there with a LSP Trooper early Saturday morning. 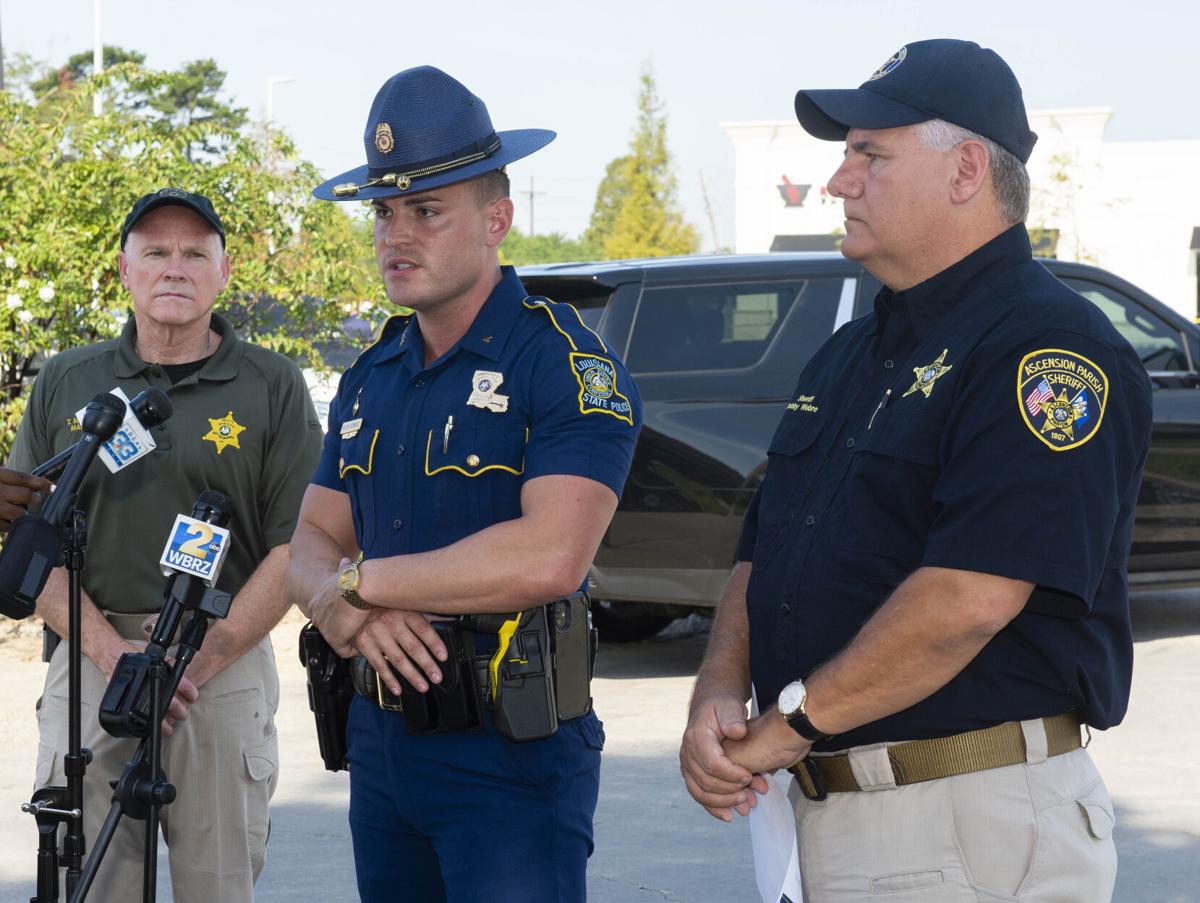 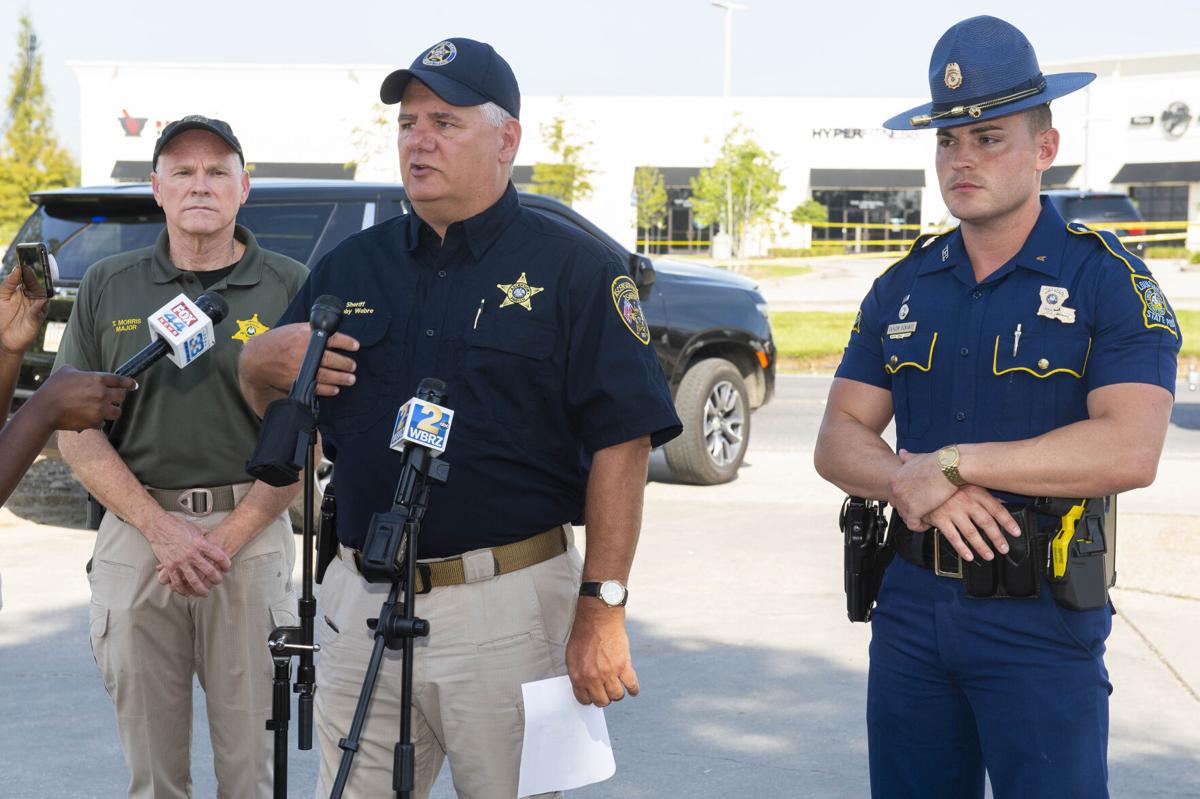 Matthew Mire, 31, led several law enforcement agencies on a sweeping manhunt early Saturday, Oct. 9, 2021, after police say he shot two people in Livingston Parish, two more in Ascension Parish and at a Louisiana State Police trooper before fleeing by car and then on foot. Police say one of the victims, his 37-year-old half-sister Pamela Adair, succumbed to her injuries. 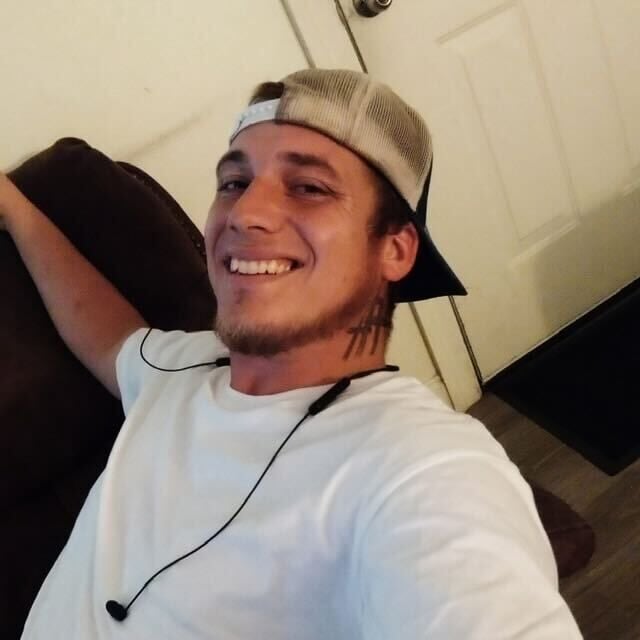 LSP provided a clearer image of Matthew Mire, 31, as a search for his whereabouts extended from before dawn to late afternoon Saturday, Oct. 9, 2021, in connection to two double shootings in two parishes that left one dead and three wounded.

Law enforcement including Louisiana State Police talk shortly before a press conference announcing a subject of interest and possible suspect, Matthew Mire, 31, in several shootings, including at least one fatal, in connection to the LSP officer-invloved shots fired incident later Saturday morning in the area of Hoo Shoo Too Road and Jefferson Highway, Sat., Oct. 9, 2021, after a white male suspect exchanged fire near there with a LSP Trooper early Saturday morning.

Matthew Mire, 31, led several law enforcement agencies on a sweeping manhunt early Saturday, Oct. 9, 2021, after police say he shot two people in Livingston Parish, two more in Ascension Parish and at a Louisiana State Police trooper before fleeing by car and then on foot. Police say one of the victims, his 37-year-old half-sister Pamela Adair, succumbed to her injuries.

As the search dragged on for a man who exchanged gunfire with a state trooper before dawn Saturday in East Baton Rouge, authorities linked him to two consecutive double shootings that wounded three and left one dead hours earlier.

Officials believe he crisscrossed the region in a stolen vehicle and shot four people, killing a family member in Ascension Parish. The other three victims survived their injuries, though one was in critical condition, officials said.

Meanwhile, the sweeping manhunt continued into Saturday evening for Matthew Mire, 31, whom officials describe as "armed and dangerous" and a "person of interest" in the overnight shootings. He was last seen wearing camouflage, officials said.

State Police said troopers tried to pull him over around 5 a.m. at La. 42 near Oak Grove Community Center in Prairieville. Instead of stopping, he opened fire and led police on a high-speed chase in a stolen blue Chevrolet Silverado, proceeding a few miles north on Jefferson Highway and crossing into East Baton Rouge.

Mire then turned onto Hoo Shoo Too Road. He drove for about 5 miles before ditching the truck in the side yard of a house, near where the road dead-ends by the Amite River.

From there, he fled on foot into a wooded area.

Officers spent the first half of the day stationed along Hoo Shoo Too Road, a stretch of mostly fields and woods interspersed with some houses, including one where the stolen truck was abandoned. Several law enforcement agencies joined manhunt, including with helicopters and search dogs.

Officials cautioned that there may be others in the woods wearing camouflage gear since it is hunting season. But if anyone sees a man who fits Mire's description, they should not approach him. Rather, they should call 911 and tell authorities.

No houses in the area were evacuated, officials said.

"We know he's armed and dangerous," Ascension Parish Sheriff Bobby Webre said. "He already killed one person and tried to kill a trooper."

State Police spokesman Trooper First Class Taylor Scrantz said the officer who exchanged gunfire was being evaluated at a local hospital but appears to be in stable condition.

Authorities said the first of two shootings linked to Mire occurred around midnight off La. 444 in French Settlement, when the man stepped outside the home where he was staying with his mother, walked a short distance to a nearby trailer and ultimately opened fire on his neighbors. A man and woman were injured but expected to recover.

Ard said he believes the victims heard a noise on their porch and went to investigate: "They then witnessed someone barging in through their front door and firing shots."

Mire used his arm to cover his face before opening fire, Ard said.

He said detectives are working hard to determine a motive in the shooting, though they have mostly ruled out the possibility of an attempted burglary.

"The information we have suggests he went there to shoot them," Ard said. "But it's strange because we can't put a motive on it yet. Hopefully we can catch this guy soon and he can fill in the gaps."

Mire had been staying with his mother maybe for a couple months, since his girlfriend died from a drug overdose, Ard said. His mom was out when the shooting occurred, leaving Mire alone inside the trailer Friday night.

The victims, whose names have not been released, were staying elsewhere after their discharge from the hospital Saturday afternoon, but other neighbors said they knew Mire as a polite young man, though he and his mother would often fight. She had been living in a trailer along La. 444 for several years, one of several aging mobile homes just off the main road.

After shooting his neighbors, officials believe Mire ran through a wooded area behind the trailers and emerged in a nearby neighborhood, where he stole a Silverado from outside a house.

Tasha Ryan, who arrived at the scene of the manhunt hours later in East Baton Rouge, said the stolen truck belonged to her son, who lives in French Settlement. He called her around 7 a.m. saying his truck was gone, Ryan said.

She said her son needed some medication that was inside the vehicle, which is what brought her down to East Baton Rouge.

Officials believe Mire drove to Prairieville after stealing the truck, then carried out the second shooting targeting two family members.

Relatives told The Advocate that Mire shot a cousin, Joseph Schexnayder, 42, who was hospitalized in critical condition and undergoing surgery on Saturday, and his significant other Pamela Adair, 37, who died from her injuries.

Another relative who lives nearby, Kevin Schexnayder, said he thought maybe someone was beating on the door of his garage apartment around 2:30 or 3 a.m.

"It sounded like someone was throwing rocks on the tin roof, but those were gunshots," he said.

He walked outside and saw a vehicle speed out of the driveway and up the road. Then he discovered the victims.

"The door to the house was open," he said. "My granddaughter walked out, and I saw my son laying in the kitchen. He was shot in the head or the neck, and his elbow was blown out. I looked in the bedroom, and Pam was on the floor in front of the bed."

Adair appeared to be shot in the chest, stomach and arm, he said.

"None of it has sunk in yet," Kevin Schexnayder said. "Police started roping off the house and I was outside in my pajamas."

He said he stood there while the crime scene went up. A detective handed him a shirt to wear.

Hours later, as the manhunt stretched into late in the afternoon, Kevin Schexnayder described how Adair and his son spent 17 years together and had two children.

The accused shooter, he said, is his nephew.

"That's my sister's boy, Matthew," Kevin Schexnayder said. "His girlfriend overdosed a couple months back, and he never got over it. He took it real real hard. He was messed up. He just got convinced people were after him."

While his full criminal history remains unknown, court records show Mire was arrested in 2017 after his grandfather called 911 and said Mire had attacked him.

Deputies responded to a home off Joor Road in East Baton Rouge. The victim said Mire "pushed him in the chest and struck him about the body several times" after the man asked his grandson to "clean up after himself."

When the grandfather called police, Mire "stated that he was going to shoot himself," according to his arrest report.

He admitted to striking his grandfather for "not talking to him properly and constantly disrespecting him."

Mire also said he was upset when he threatened to shoot himself and wasn't serious, the report says.

After his arrest on domestic abuse battery, Mire pleaded guilty to simple battery of the infirm and was sentenced to probation.

He was ordered to complete anger management classes, community service and a mental health evaluation. The court set aside his conviction after he completed those conditions.

Even as the sun started setting Saturday evening, law enforcement pledged to continue searching their search for Mire with urgency. They also said officers are providing heightened security around the shooting scenes.

"We need to get this guy into custody because there's gonna be no sleep until he is," said Ard, the Livingston Parish sheriff. "We're pretty confident he's contained to the perimeter, but we need to be cautious. Is he outside that area? Has he committed suicide? Is he hiding in a deer stand or vacant house? We don't know."