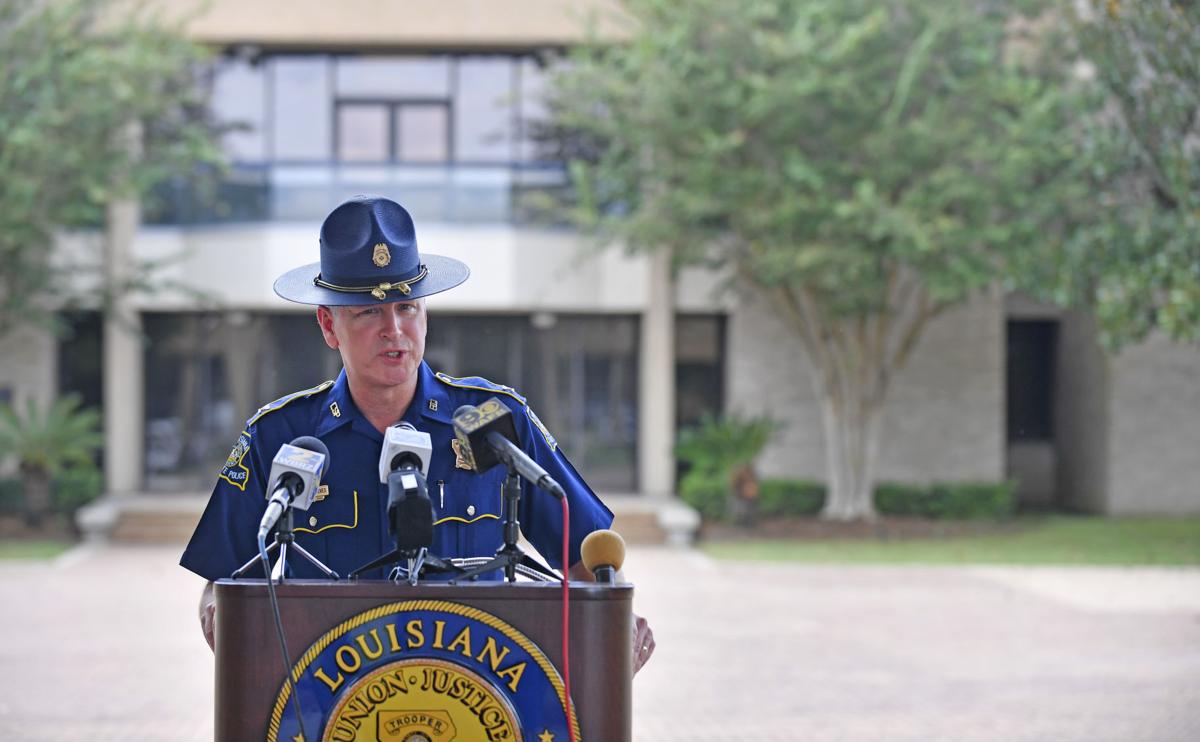 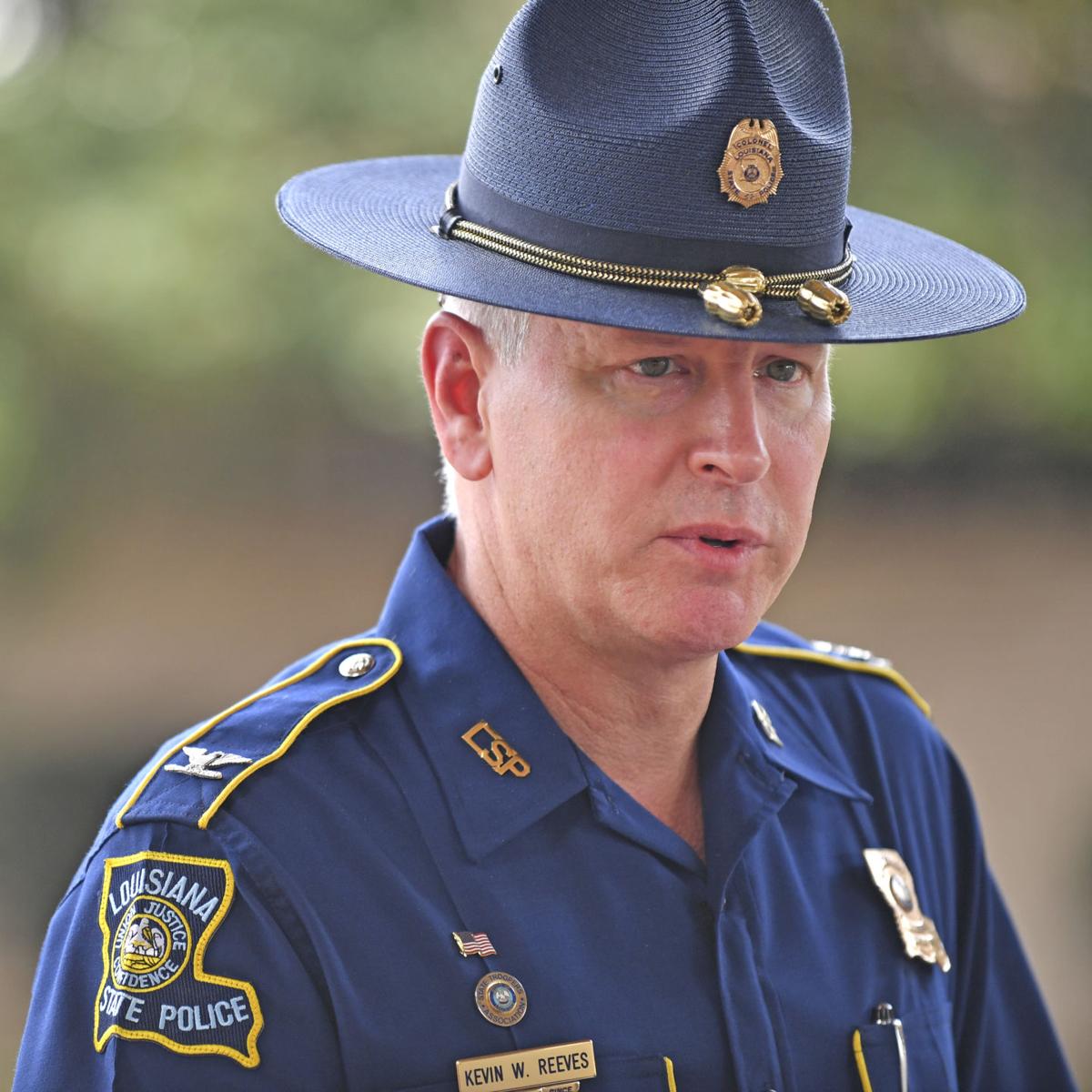 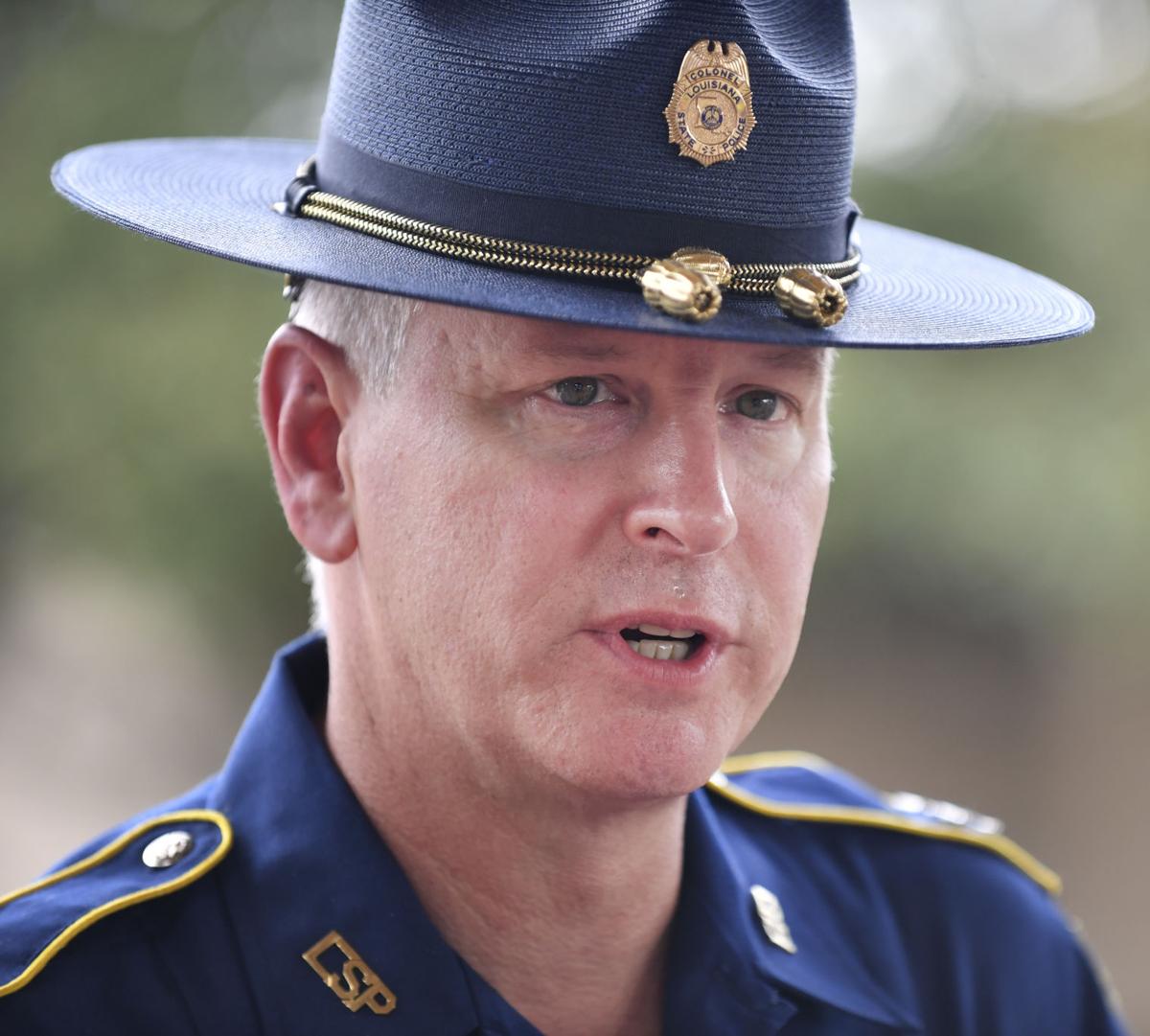 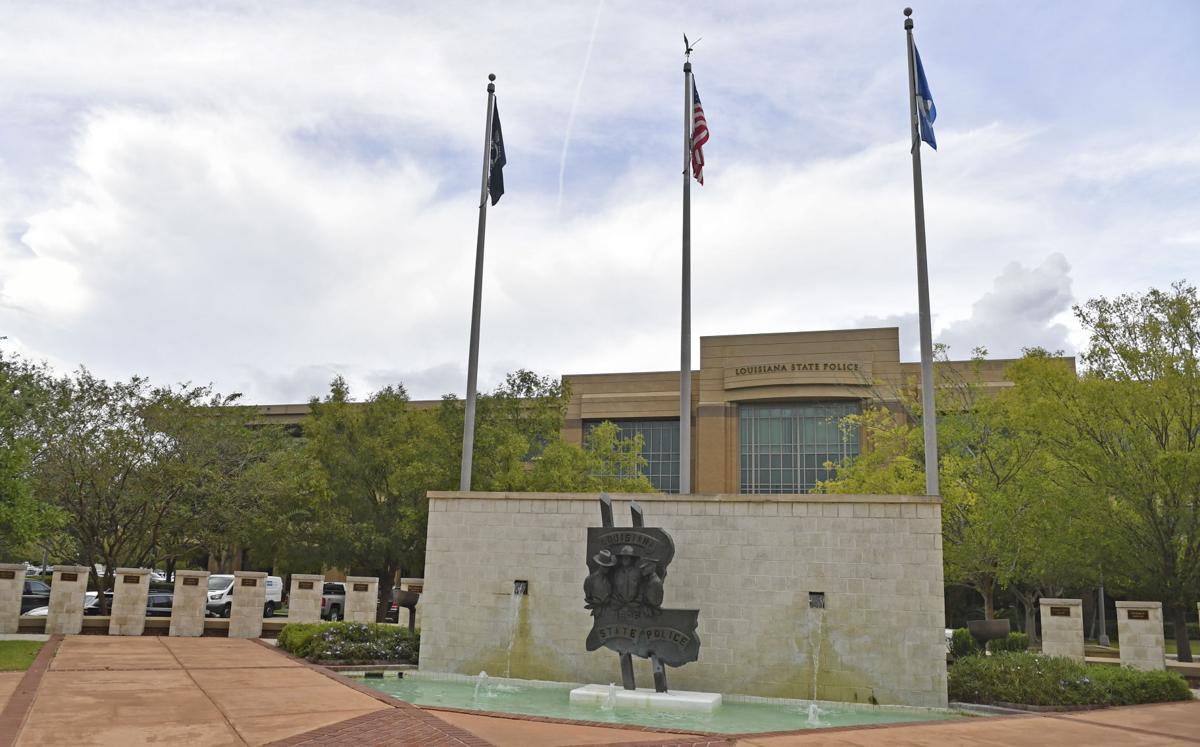 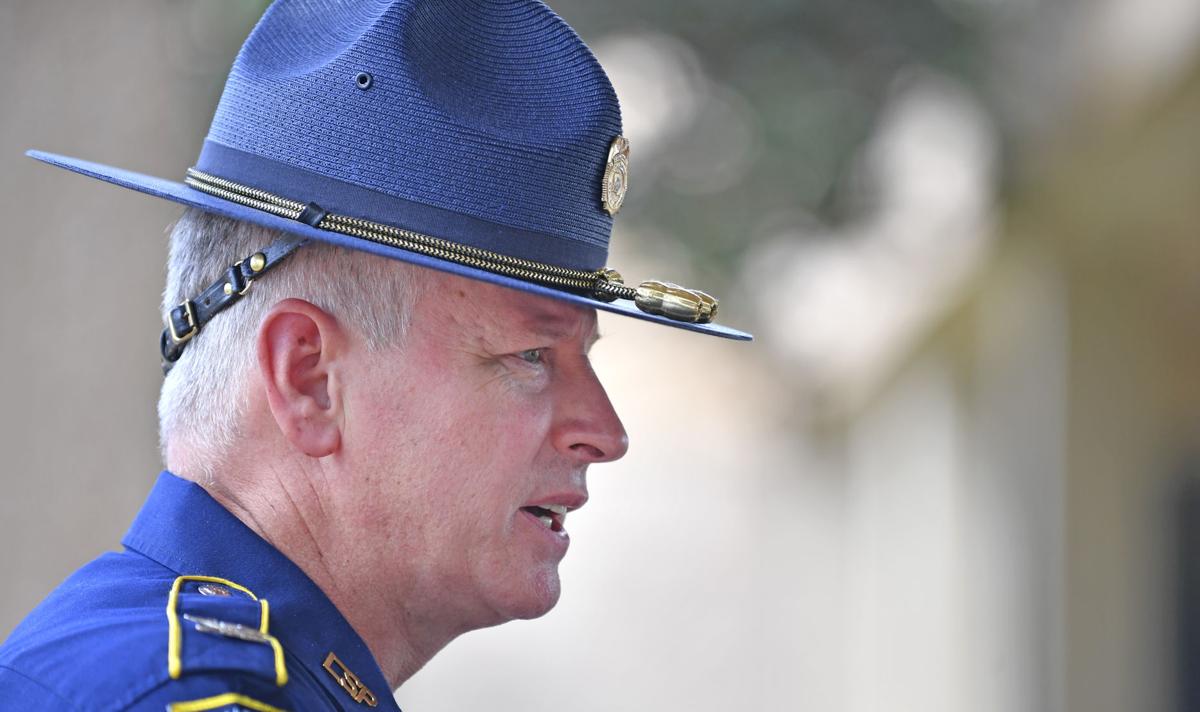 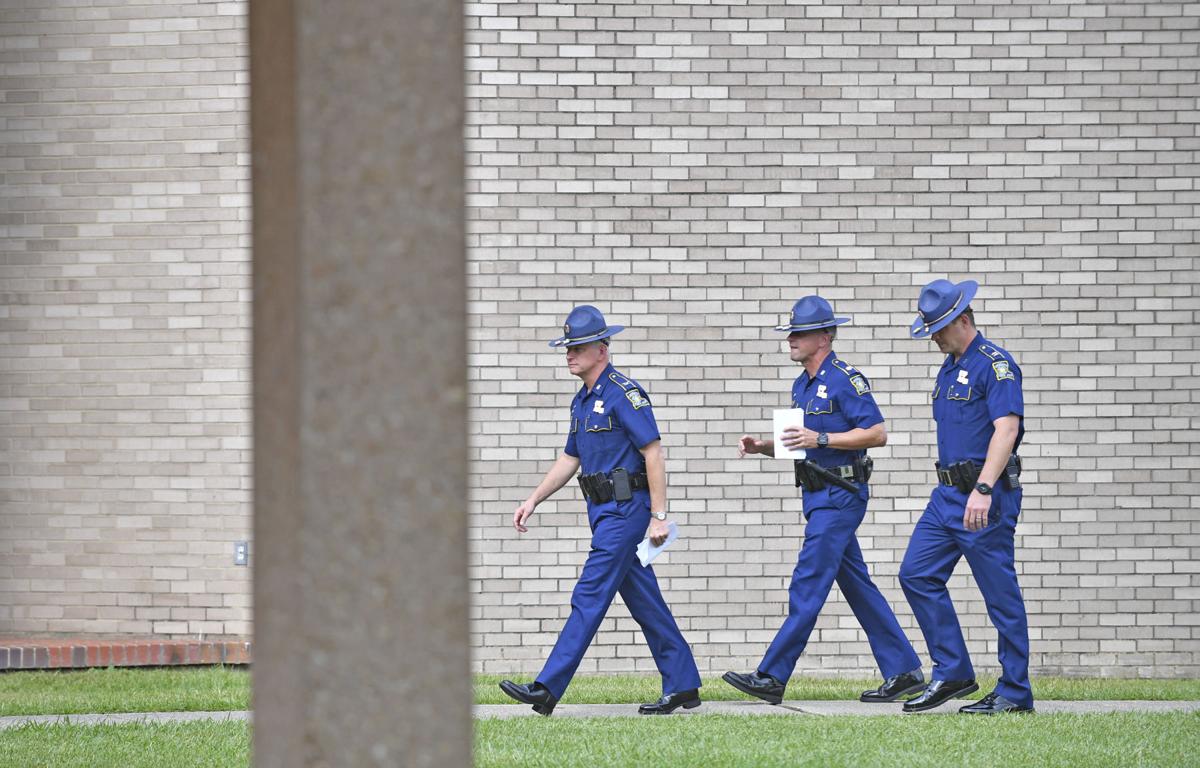 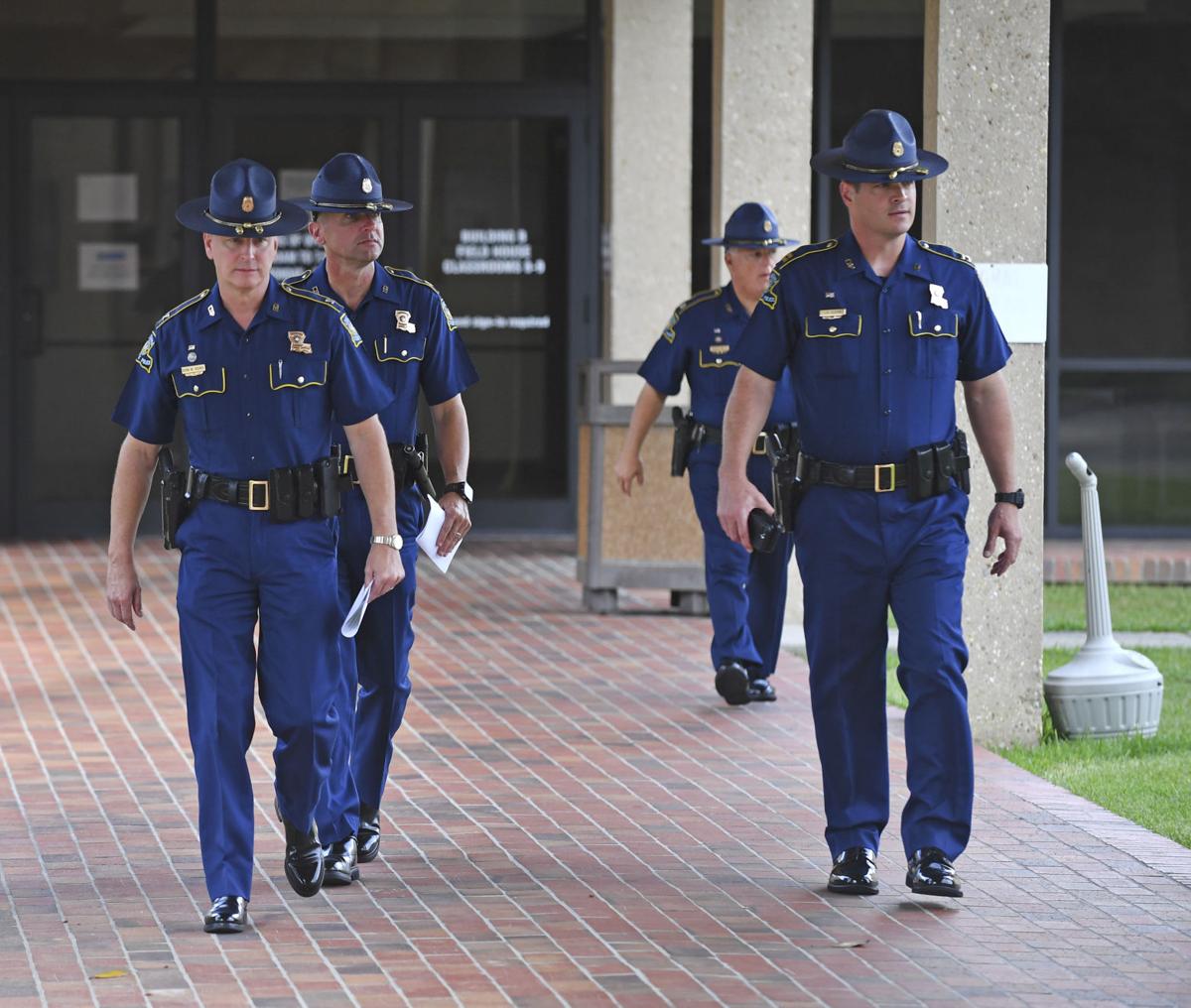 From left, Louisiana State Police Col. Kevin Reeves, Maj. Doug Cain and Capt. J.B. Slaton walk to a press conference to speak after cadets in the academy reported injuries during defensive tactics training, Tuesday, October 15, 2019, at the Louisiana State Police Training Academy in Baton Rouge, La. They are joined by Lt. Col. and chief of staff Mike Noel, back right. 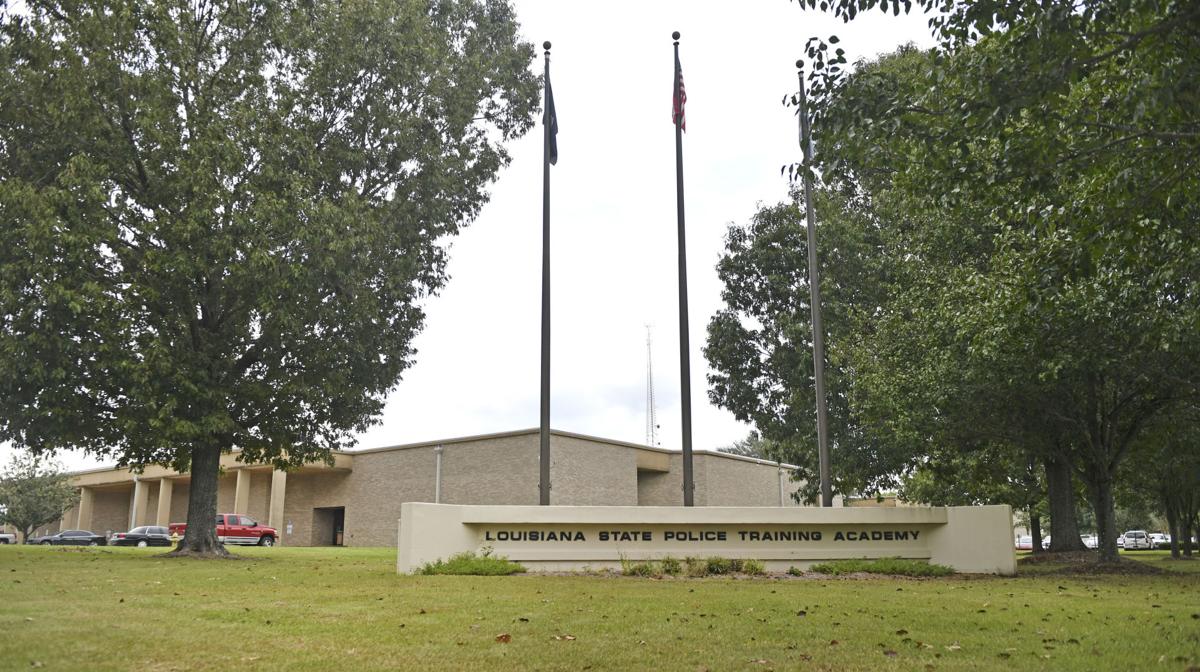 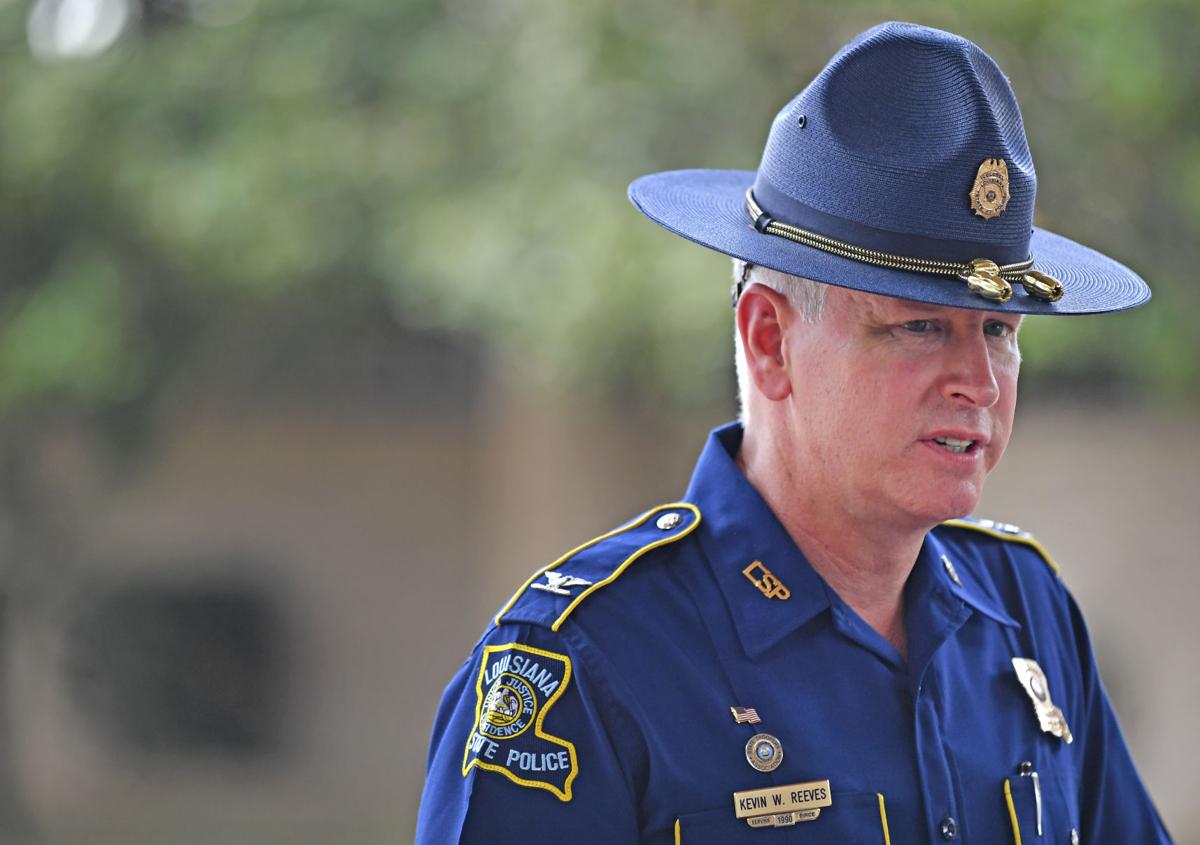 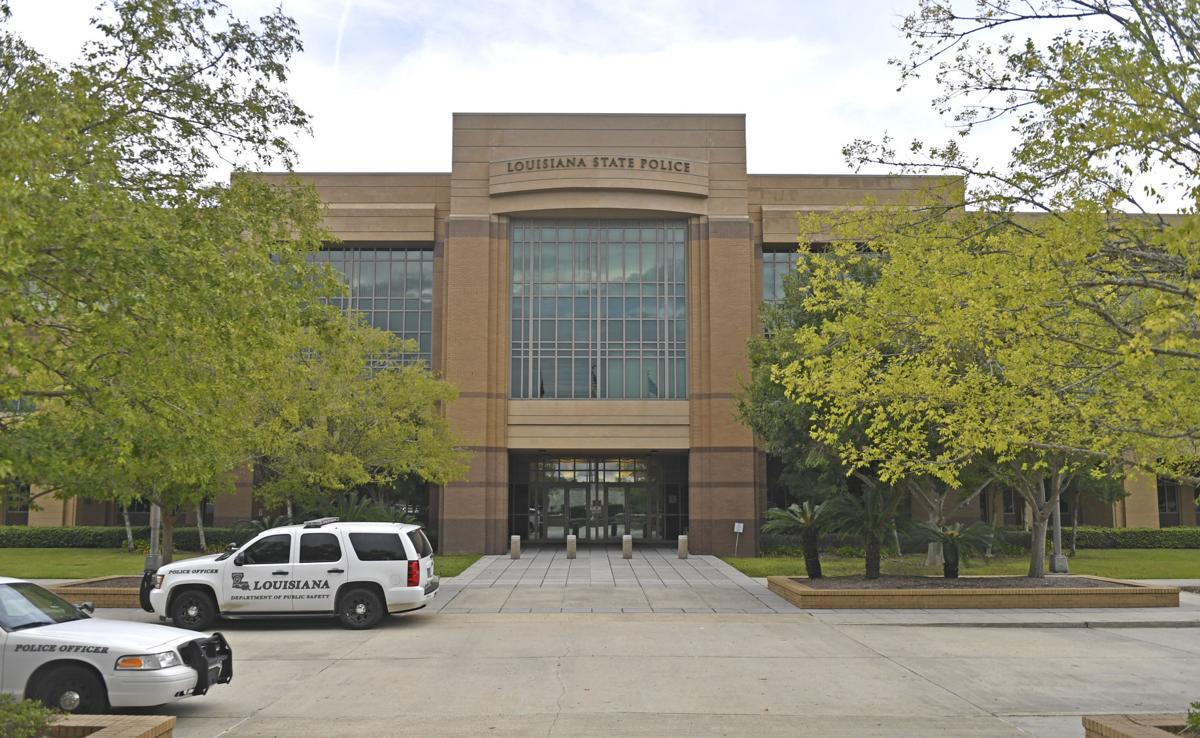 From left, Louisiana State Police Col. Kevin Reeves, Maj. Doug Cain and Capt. J.B. Slaton walk to a press conference to speak after cadets in the academy reported injuries during defensive tactics training, Tuesday, October 15, 2019, at the Louisiana State Police Training Academy in Baton Rouge, La. They are joined by Lt. Col. and chief of staff Mike Noel, back right.

Three State Police troopers were transferred out of the agency's training division this week after their superiors concluded that recent exercises went beyond "normal parameters" and caused significant injuries to some of the cadets involved.

"Last night when I met with the cadets, I apologized to them for the events that took place," he said. "I took responsibility. … I take this very personally."

He objected to using the term "hazing" to describe what happened but said some of the training "may have extended outside our normal parameters." Reeves did not provide an explanation as to why, in this particular case, the training appears to have gone too far.

Two cadets were also removed from the academy early last week after they were found cheating on a written test, Reeves said. The cheating was discovered after one was found with a cellphone, which is not allowed during State Police academy.

State Police leaders released minimal information about the incident until Tuesday afternoon. They confirmed late Monday only that the academy's defensive tactics training program had been suspended and an internal investigation launched because the injuries went beyond what's considered normal during those exercises, which include handcuffing, use of the expandable baton, pressure points, physical strikes, blocking and grappling techniques.

Still the only specifics that have been provided are that the injuries included bruising. Reeves said even broken bones are "not uncommon" during the physical parts of training, especially defensive tactics aimed at preparing recruits to effectively restrain a combative suspect without using excessive force.

The point is to minimize the likelihood of injury to both troopers and suspects, Reeves said.

State Police leadership learned about the injuries on Friday night, then spent the weekend "vetting the information" before concluding that an internal affairs investigation would be "reasonable and prudent," Reeves said. The training was suspended Sunday morning, and senior staff "visited with and evaluated the cadets" later that day.

On Monday, the agency launched an administrative investigation. Reeves said that's also when the first of three personnel transfers occurred.

The cadets were allowed to use their cellphones Monday night to contact their families after agency leadership learned that reports of the injuries would be published in local media. Then the internal investigation continued Tuesday, leading to the two additional transfers. Officials declined to provide the names of the reassigned troopers and their new positions.

"The welfare of our cadets is paramount to me," Reeves said. He pledged to "determine what went on last week and put measures in place to ensure the remainder of this academy goes without incident and these cadets are properly prepared to become state troopers at the end of January."

A criminal investigation has not been opened.

"We have not reached that point here yet," Reeves said, noting that if internal investigators have reason to believe criminal activity took place, they could halt the administrative investigation and allow criminal investigators to take over instead.

Rafael Goyeneche, president of the criminal justice watchdog Metropolitan Crime Commission in New Orleans, said he believes State Police should have ruled out criminal charges before proceeding with the internal investigation. He cited other media reports about the incident presenting "deeply disturbing" accusations that cadets were being punished through physical abuse and sleep deprivation.

"Hazing is now a felony in the state of Louisiana, and if the training staff was involved in hazing … those are felony offenses," Goyeneche said. A recent change to state law came after the 2017 death of LSU freshman Max Gruver during a fraternity initiation ritual. "Because the integrity of this agency is at stake, you need to conduct that criminal investigation before you muddy the waters."

Cadet Class 99 is expected to graduate in January.

Reeves said past academy classes and training practices are not under investigation but stopped short of calling this an isolated incident. He referenced a fine line between teaching cadets how to respond in high stakes situations and exposing them to unnecessary violence — a line that policing experts have studied at length in recent years with some questioning the need for "military bootcamp style" techniques.

"The current culture in some American law enforcement agencies tends toward the warrior mentality. The seeds of that culture are planted during recruit training," researchers wrote in a 2017 report from the Harvard Kennedy School and the National Institute of Justice.

"I have full confidence in our training program here at the Louisiana State Police academy, but that training process has to stay within the parameters and the lesson plans that are established," he said. "This training is necessary for every trooper … to ensure that they are prepared to deal with life or death situations during their career."

Editor's note: This story was updated Tuesday night after State Police clarified that there were no broken bones resulting from the incident in question, despite comments made earlier in the day.