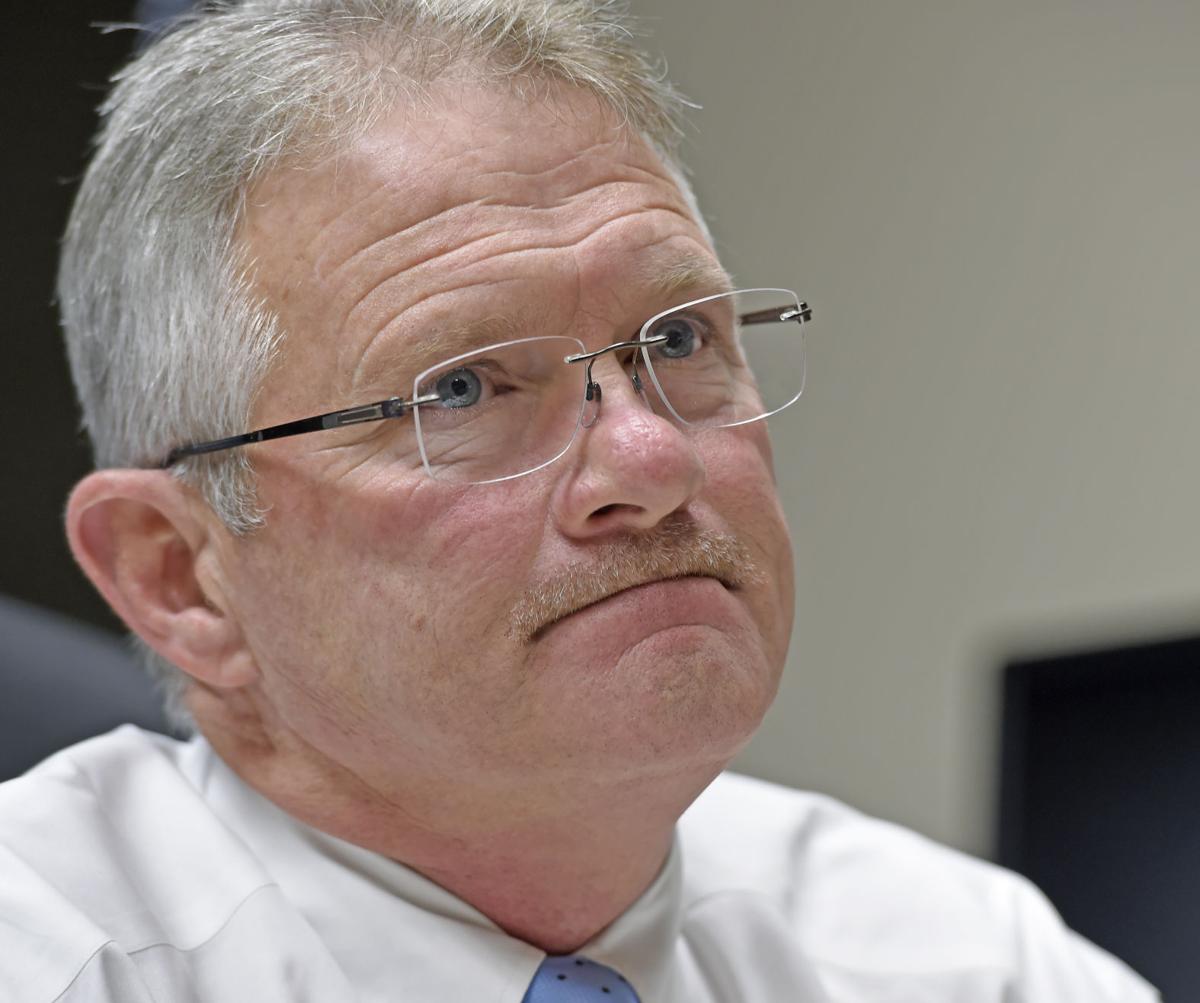 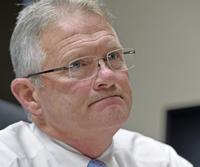 BRPD Chief of Detectives Capt. John Windham ponders the answer to a question while talking about the homicide division and other divisions he oversees as Criminal Investigation Bureau Commander Wednesday Dec. 20, 2017, in Baton Rouge, La. 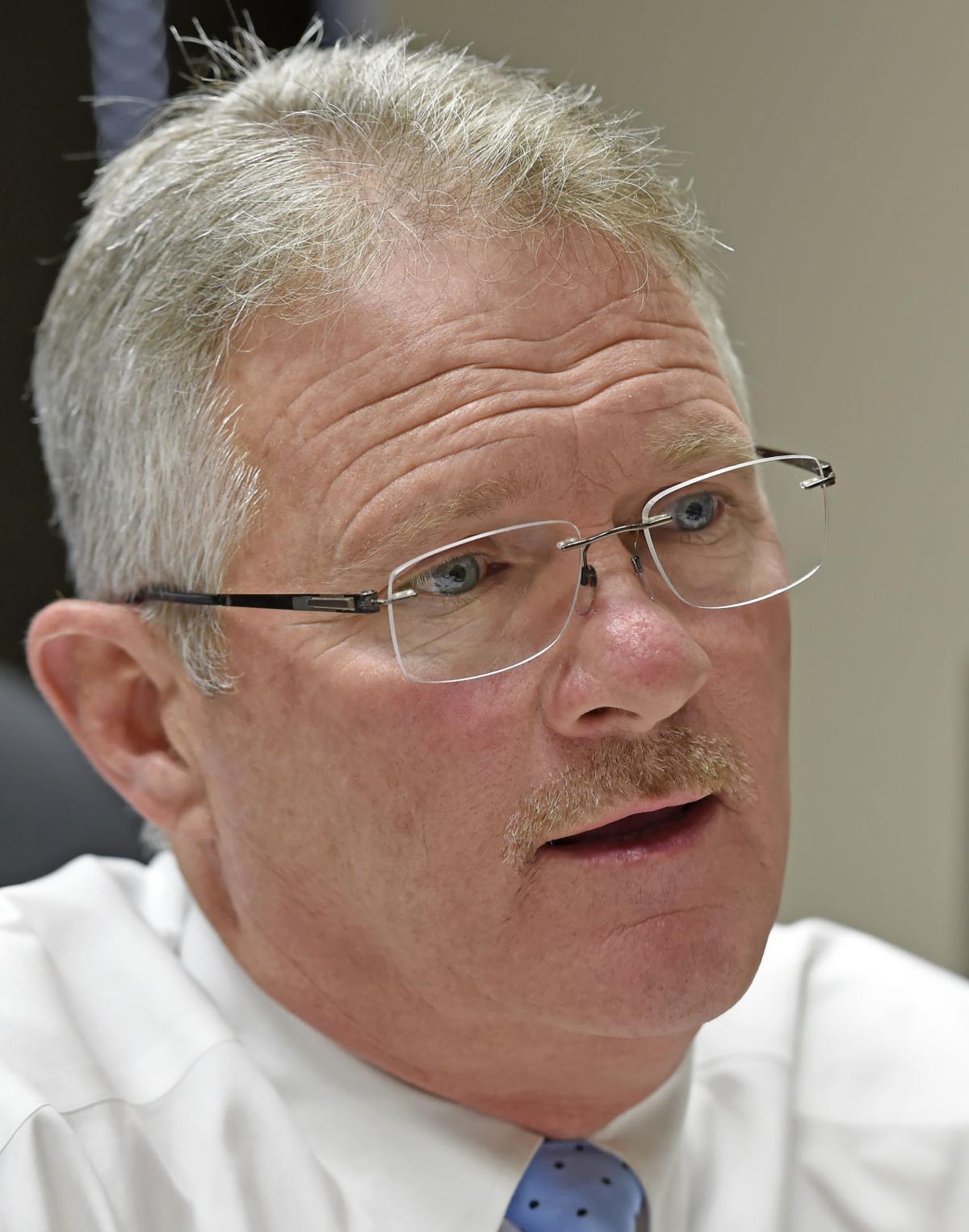 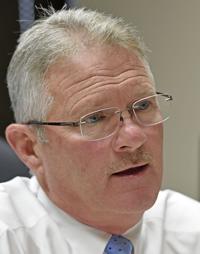 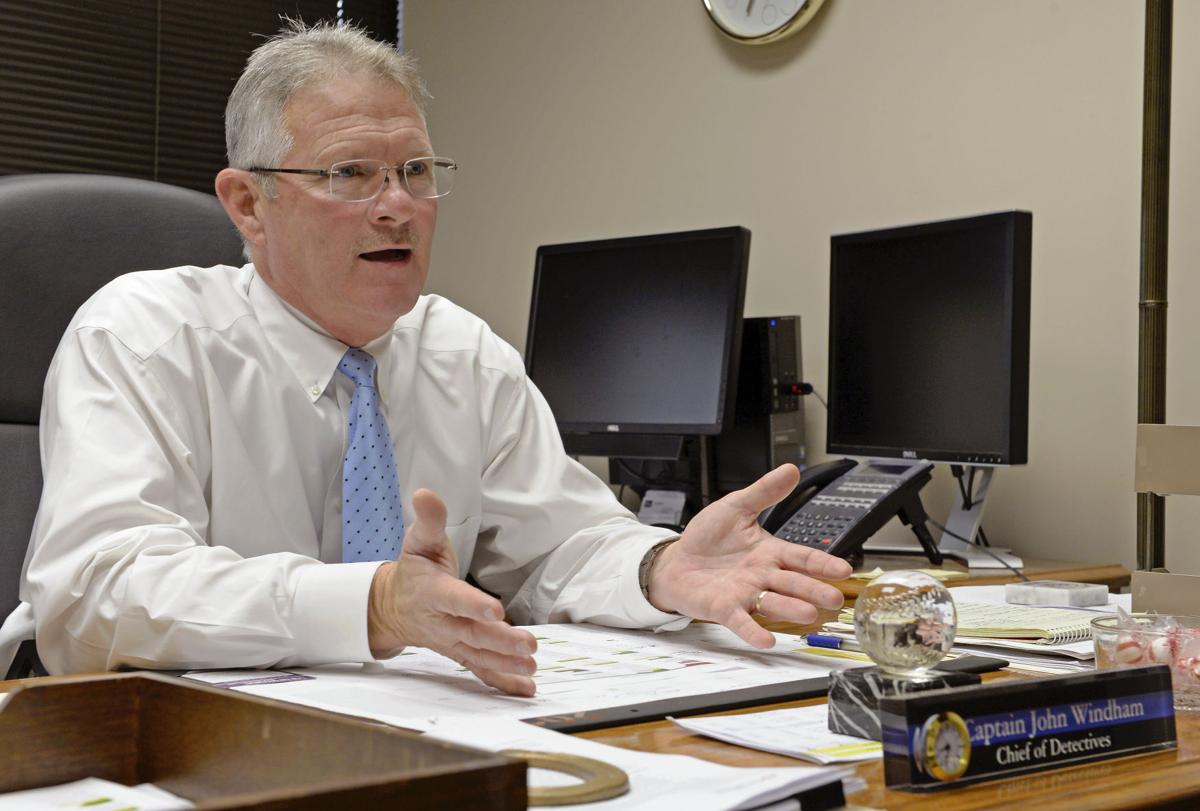 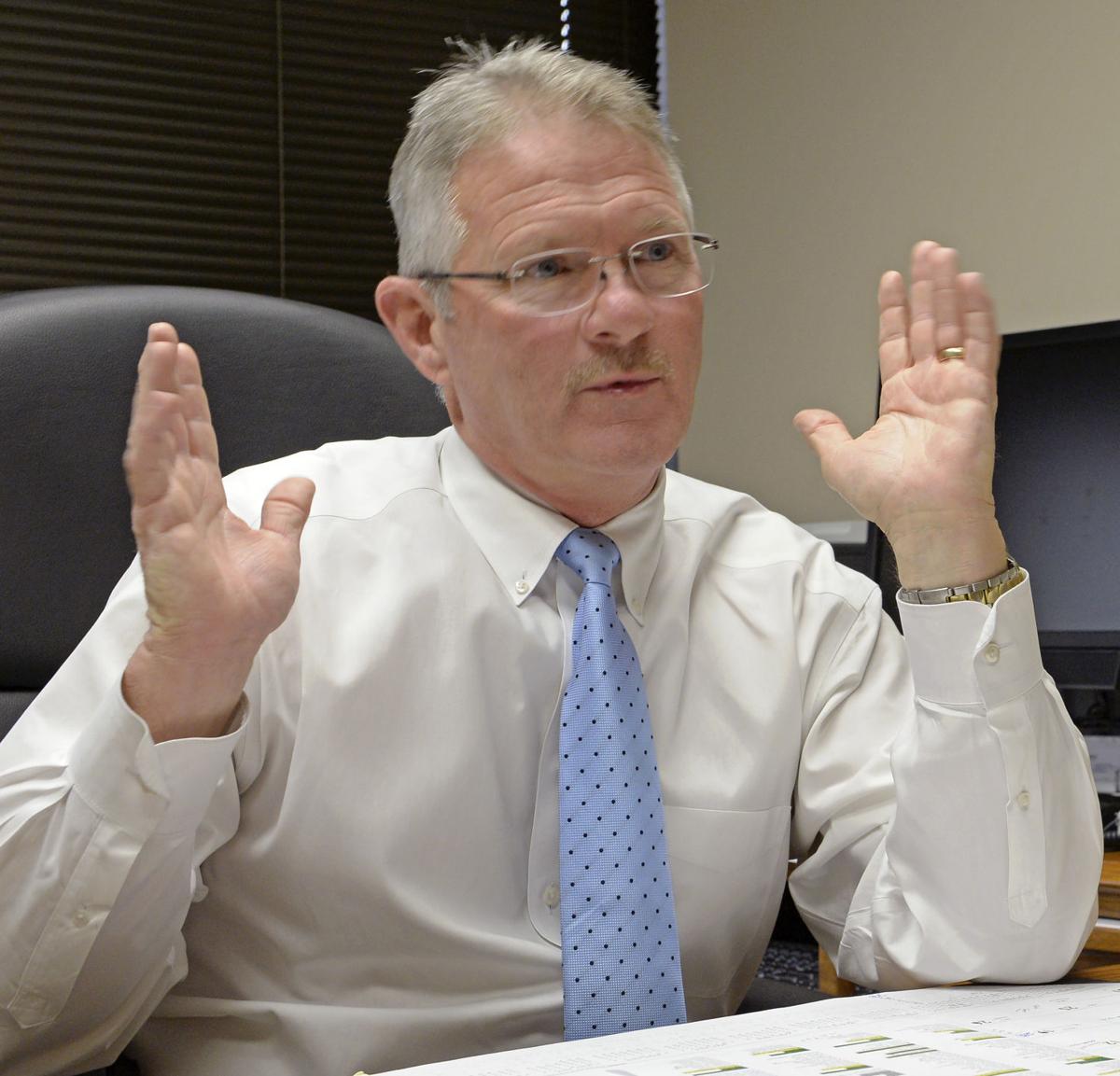 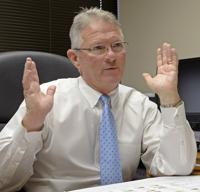 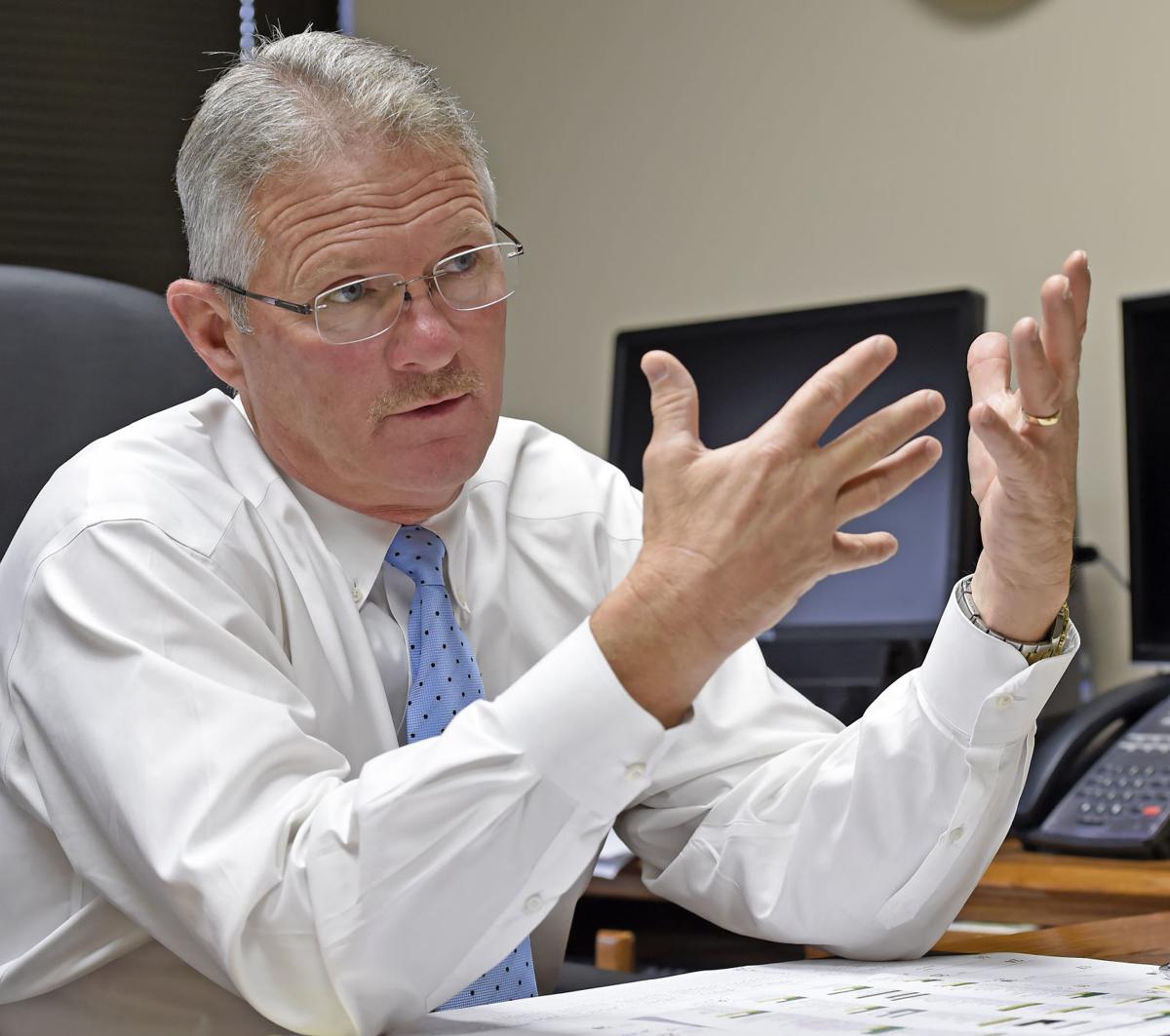 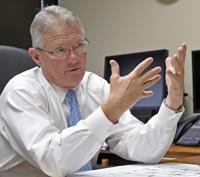 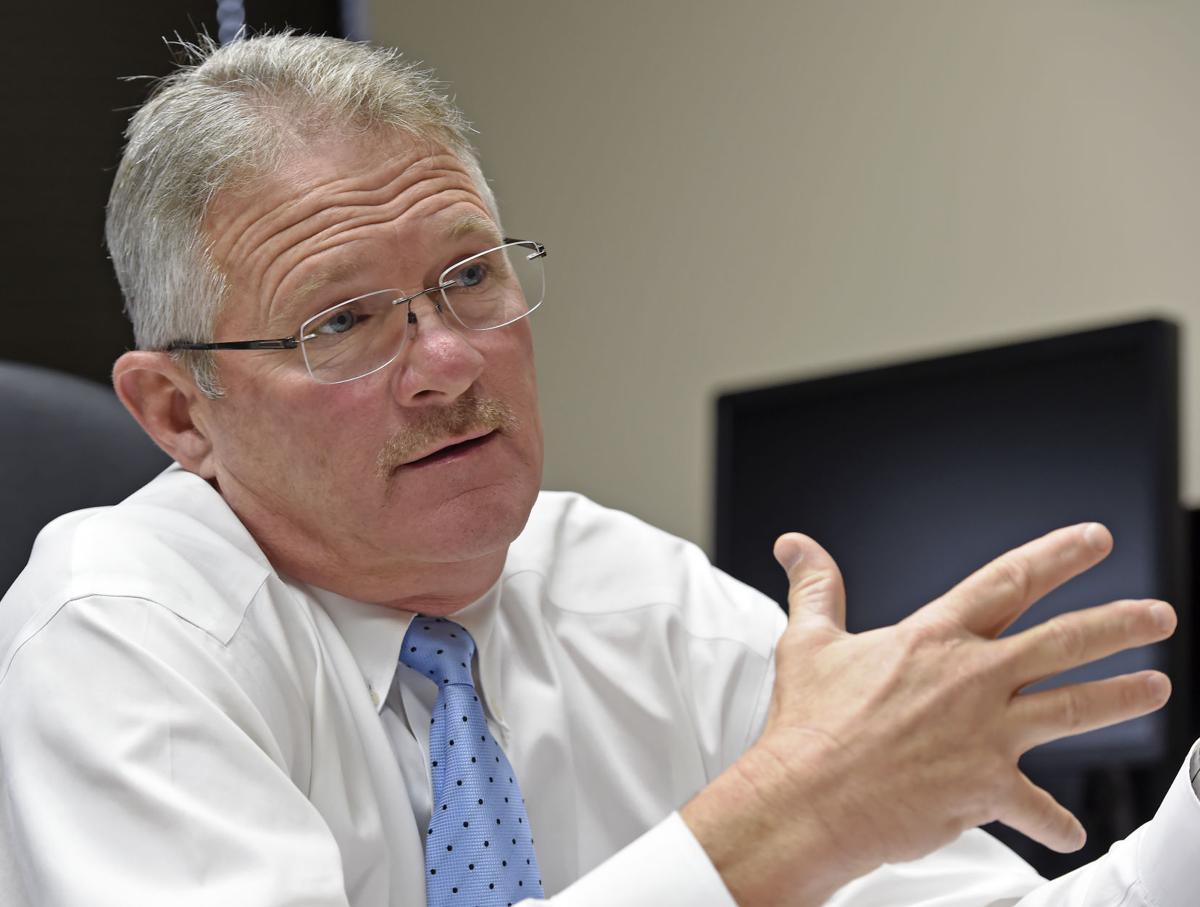 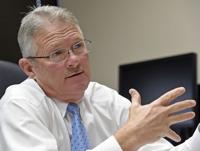 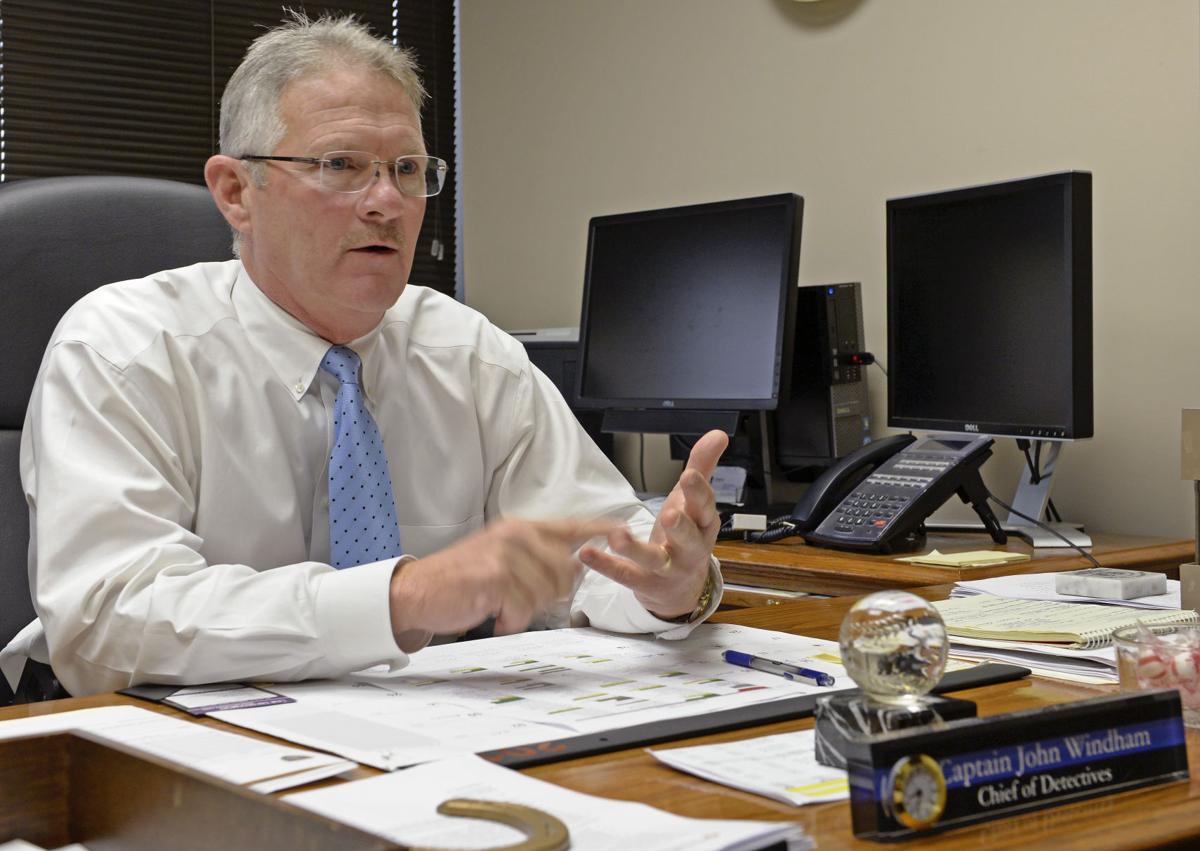 BRPD Chief of Detectives Capt. John Windham ponders the answer to a question while talking about the homicide division and other divisions he oversees as Criminal Investigation Bureau Commander Wednesday Dec. 20, 2017, in Baton Rouge, La.

In 2014, Baton Rouge Police Department homicide detectives worked 53 homicide cases. At that time, there were 17 officers in the unit.

Three years later, as the number of killings in the city soars to a historic high, four fewer homicide detectives are staffing the critical division, a ripple effect from an officer shortage that has handicapped the department since early 2016.

"It's an all-star crew over there right now, (but) they are taxed," Capt. John Windham, the chief of detectives, said of the homicide division. "They can’t keep working at the pace they’re at."

As the homicide rate continued to rise this past year — there were 84 killings within Baton Rouge city limits being worked as homicides as of Friday — Windham said police brass have made minor changes to try to ease the detectives' workloads.

This has included pulling in support and relying on other divisions more frequently for assistance when possible, like getting help from narcotics detectives with drug-related killings. The agency also has moved officers to a proactive street-level unit in hopes they can stop crimes before they escalate into killings.

But the bottom line has been that all the Baton Rouge Police Department cases this year have been worked by nine detectives — the portion of the 13 members of the unit who are not in supervisory or specialized roles.

"Homicide detectives are overwhelmed and woefully short on numbers," said East Baton Rouge Parish District Attorney Hillar Moore III, commenting in late November during an interview about the unprecedented number of killings this year in the city.

So far, the clearance rate hasn't taken a huge hit, especially as it can take weeks or even months to solve a homicide, so it is unclear what the final result will be for 2017. Since 2000, the city's homicide clearance rate has hovered around 60 percent, just barely below the national average.

As of late December, there have been arrests in about 45 percent of cases, according to records kept by The Advocate. But cases also can be considered cleared — a designation that signifies police have identified the suspect, not obtained a conviction in court — by "exception," such as when the perpetrator dies.

In comparison with Baton Rouge, the New Orleans Police Department clearance rate is much lower, with FBI data showing the NOPD solved 34 percent of homicides between 2000 and 2016.

"Our clearance rate is still there, (but) I’m concerned about it," Windham said. "At what point are we going to see that effect?"

'You wind up short'

In early 2016, Windham said two homicide detectives resigned with plans to work for different law enforcement agencies. Then, soon after, Baton Rouge Police Department leaders decided two other detectives had to be pulled back to uniform patrol because there simply weren't enough cops on the streets.

"We’re prioritizing where we can least afford to lose somebody. ... (But) when we lose somebody now, there’s nowhere to pull from — you wind up short," Windham said. "It’s a daily conversation between bureau commanders about manpower."

Baton Rouge police leaders this year have complained that attrition has left the agency without enough officers. The department was still 56 officers short of its full 698-officer allotment Dec. 5, barely an improvement from August when interim Police Chief Jonny Dunnam said the agency is facing the largest manpower shortage he could remember in at least 15 years. Seven new officers were added in November from a Peace Officer Standards and Training-certified academy, but ongoing retirements meant those additions had little effect.

East Baton Rouge Parish Mayor President Sharon Weston Broome pledged her commitment to two 35-officer academies in 2018 in her budget for the coming year, which officials hope will begin to replenish the ranks. Windham said when he can, he would love to add to the homicide division and give his detectives some needed relief.

“I realize they have to be getting frustrated because they are spending a lot of time away from home and they are working a lot of overtime," Windham said.

Baton Rouge Police Department homicide detectives lead any death investigation inside the city limits. This predominately means homicides — which can include both intentional killings and those law enforcement later deem justified — but also includes suicides, overdoses and suspicious deaths. Although homicides are by far the most time-consuming investigations, the number of drug overdoses this year also has increased, adding to the workload of the already taxed detectives.

Windham said they made some minor adjustments this summer when they realized homicides were spiking, noting that in June, July and August, there were at least eight killings each month in the city.

They reorganized the homicide detective unit's schedules from two shifts into one squad. This allowed whoever was available with the lightest caseload to respond to the next incident, Windham said, instead of basing the assignment on what time of day it happened.

The department also added an officer who was taken off street duty because of an injury to the Crime Strategies Unit, intended to support homicide detectives from behind the scenes, collecting intelligence, transporting evidence and doing other work detectives otherwise would have, Windham said.

Most importantly, Windham said, the department shifted around manpower again to add five officers to the Street Crimes Unit, which is intended to intercept or defuse violence before it becomes a homicide detective's case.

“(And) we’re using our support units more. ... That’s the way we’re dealing with it, until we get the manpower resources," Windham said. "They’ve exceeded my expectations. I would (have) expected more requests for transfer."

He has received only one such request from his nine homicide detectives to be placed in a new unit, Windham said, but because there is nobody to replace him, the detective has stayed in his role, working hard.

"As soon as I can, I will," Windham said, admitting he's worried about losing more. "They're doing more with less. ... They want some help."

Detectives' caseloads and the time they have to work cases are critical factors in whether they are successful, according to a study of homicide investigations by David Carter, a criminal justice professor at Michigan State University. Carter analyzed seven U.S. law enforcement agencies — diverse except in their success solving homicides — finding that the ideal homicide squad includes one supervisor and four detectives who each rotate being assigned as the lead in a homicide case.

For investigators to have sufficient time, Carter said it is optimal that a squad of this size work no more than 12 homicide cases a year — which is broken down to about three cases for each detective as the lead investigator.

"If you can increase clearance rates, you're also preventing future homicides," Carter said. "You're making a safe community, (and) bringing down the fear of crime."

Baton Rouge homicide detectives obviously have much higher caseloads, given that there are nine detectives handling 80 cases. But Windham noted that the cases aren't divvied up evenly, as some killings turn out to be much easier to solve than others.

The East Baton Rouge Parish Sheriff's Office handles fewer homicide cases than the Police Department, but it has eight detectives working homicide cases. Still, the sheriff's homicide unit handles a wider range of cases, including working nonfatal shootings in the unincorporated parts of the parish. The Sheriff's Office historically solves about 20 percent more homicides, according to FBI statistics, at about an 80 percent clearance rate. This year, the detectives cleared arrests in 79 percent of their 14 homicides, according to records kept by The Advocate.

“We’re dealing with less homicides and that’s a big factor; you have more time to be able to spend on that investigation," said Capt. Todd Morris, who oversees the sheriff's Homicide and Violent Crimes Unit. "Time is critical and the investigator needs to be able to have the time to work that case thoroughly and completely."

Morris said their homicide unit is structured in the way Carter found optimal, with four detectives working in a squad, one taking the lead in each case. He said despite manpower issues that also plagued the Sheriff's Office this year — short 42 of 407 uniform patrol and detectives at the end of July — the homicide unit was never thinned.

"It’s very critical to have the manpower to be able to work them, and work them thoroughly, to make an arrest and bring some closure to the victim’s family," Morris said.

Carter also found that seven departments he studied with the high clearances rates — 80 percent or more — all had separate cold case divisions. Windham and Morris said neither of them have a separate unit or group of detectives working on these years-old, unsolved cases, but they do expect homicide detectives to take those up in their spare time. Baton Rouge police in 2013 had one detective dedicated to cold cases, but that position was eliminated after grant funding dried up.

But despite their challenges this year, Windham said he's proud of his detectives, who solved at least one cold case this year and 37 homicides so far.

“But that's not to say we’re satisfied with our clearance rate, no," Windham said. "We’re not satisfied unless it’s 100 percent. ... You want to solve them all."

The Metro Council gave a thumbs up Tuesday to Mayor-President Sharon Weston Broome's 2018 budget proposal, which includes money for a jail div…