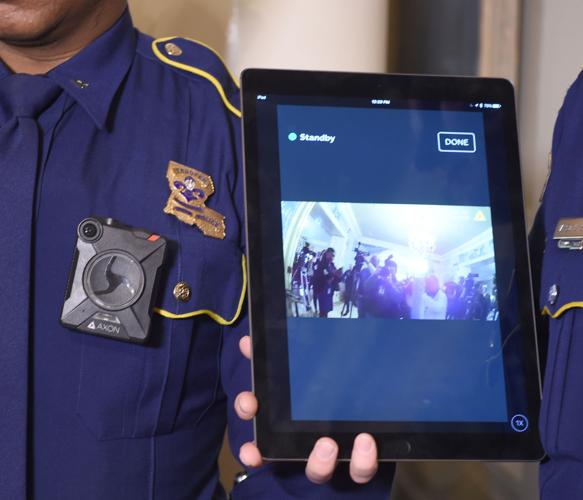 LSP Trooper Bryan Lee, left is wearing a Taser Axon body camera LSP will be receiving. At right is a screen to show what the camera actually sees. Axon, a business unit of TASER International (NASDAQ: TASR) announced that the Louisiana State Police (LSP) would be among the first public safety agencies in the country to opt for a full deployment of 1,556 Axon Body 2 cameras. 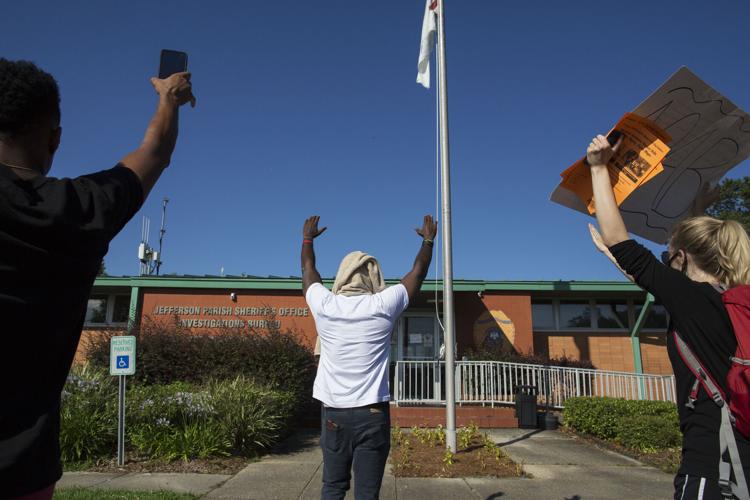 Protesters seeking for justice for Modesto 'Desto' Reyes, who was shot shot by and killed by a Jefferson Parish sheriff's deputy on MAY 27, and demand that Jefferson Parish police officers wear body cameras raise their hands and arrive at the Jefferson Parish Sheriff's Office Investigations Bureau in Harvey, La. Thursday, June 4, 2020. Reyes, 35, a popular musician and rapper, was shot and killed by a Jefferson Parish Sheriff's Office deputy on Wednesday when Reyes pointed a weapon at deputies after a short chase, Sheriff Joe Lopinto said. ReyesÕ family members and friends contend footage from video cameras refutes JPSO's version of events, said ReyesÕ little brother, Alfonso Rowland. 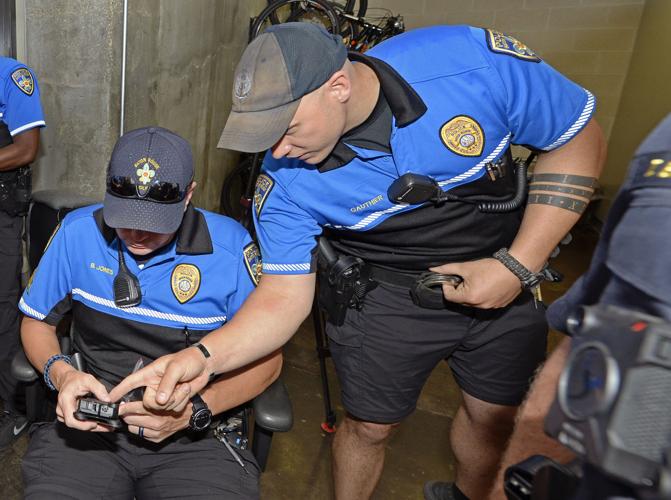 Long a holdout from a wave of law enforcement agencies that outfitted officers with body-worn cameras amid calls for more transparency, the East Baton Rouge Sheriff’s Office is finally poised to equip all deputies with the devices by 2023.

"This is something I have wanted to do for some time now, but due to budget constraints it wasn't possible,” Sheriff Sid Gautreaux said in a written statement. “I think that these cameras will not only be good for transparency, but also enhance deputy safety and evidence quality."

The sheriff’s office has ordered 175 cameras from Arizona-based police equipment maker Axon Enterprise, sheriff's spokesperson Casey Rayborn Hicks said. Patrol deputies will be the first to receive the devices and the office hopes to start training them to use the cameras by September, Hicks said. The sheriff's office said specialized units will be trained later.

In the five-year, $2.5 million contract's first year, EBRSO will pay Axon $193,922 for the body-worn cameras and attachments, plus $463,822 for the software, licensing and storage each year, Hicks said.

The 175 cameras cover all uniformed deputies who police the public, Hicks said.

One of the larger law enforcement agencies in Louisiana, Gautreaux’s force has faced mounting calls to purchase and use the cameras since at least 2020, when Americans took to the streets in huge numbers to protest the murder of George Floyd after Floyd was detained by Minneapolis police.

More law enforcement agencies nationwide have adopted body cameras in recent years after Floyd's death and other high-profile allegations of police brutality stirred calls for more accountability. Footage captured from bystanders' cell phones or from private surveillance cameras has also reshaped how the public understands policing, as images from a string of high-profile shootings — including the 2016 killing of Alton Sterling in Baton Rouge — have permeated debates on police reform.

In Louisiana, body-worn cameras played a key role in another of those festering controversies: The violent death of Ronald Greene, a Black barber, on a dark Union Parish roadside in 2019. Family members say they were initially told Greene died from injuries suffered in a crash following a high-speed chase. But months later, leaked body-camera footage from the scene shattered that narrative and broke the case open — it shows troopers repeatedly tasing Greene, beating him and forcing him prone on his belly for several minutes as he howled for mercy before going limp.

Some larger departments, like Baton Rouge Police, have outfitted officers with body cameras for some time.

But the technology has been slower to reach law enforcement in rural parishes and municipal departments in smaller towns. Even in larger cities and suburbs, some lawmen, like Jefferson Parish Sheriff Joe Lopinto, bemoaned the devices' cost and held back from implementing them; Lopinto’s office finally inked an $8.5 million, five-year contract with Axon to provide 500 body-worn cameras for staffers and 277 dashboard and rear-facing cameras for patrol vehicles last October.

In the state’s more rural reaches, the Washington Parish Sheriff’s Office in May entered a five-year, $186,000 contract with Axon. The firm is a major provider of both body-worn and vehicle-mounted cameras used by law enforcement nationally.

EBRSO officials say funding was one of the biggest barriers to implementing a body camera program earlier. Hicks in 2020 pegged costs of creating such a program at between $3 million and $5 million. Since then, costs of storing camera footage has gradually come down with improvements in cloud storage technology, Hicks said. That freed up cash for associated costs, like a new three-person digital evidence division that will archive the cameras' video footage, and a new training program to teach deputies how to use the technology.

The plan is too little, too late for some activists who've pushed EBRSO to adopt the cameras in years past. One case in particular illustrates their frustrations: Eugene Collins, president of the Baton Rouge branch of the NAACP, said his organization would have "a lot fewer questions" about deputies' January killing of a 25-year-old Baton Rouge man during a search for his twin brother if they had been equipped with body-worn cameras during the incident.

While deputies said the man, Deaughn Willis, came to the door with a gun in hand, his family argues his death could have been avoided if deputies had handled the situation differently.

"We know this will improve policing, but at the same time there's still a greater need for transparency," Collins said.

Asked if body-worn cameras came to EBRSO too late, a spokesperson for East Baton Rouge Mayor-President Sharon Weston Broome said the cameras posed a "significant investment" for the sheriff's office and that the mayor applauds Gautreaux for now obtaining the devices. "It's an important tool for bridging the gap between the community and law enforcement, and we commend them for doing that," the mayor's spokesperson, Mark Armstrong, said. "It's a step in the right direction."

The technology, however, isn't a quick fix for police brutality cases, studies suggest. An 18-month survey released in 2017 of more than 2,000 police officers in Washington D.C. found that those who were equipped with cameras used force and prompted civilian complaints at about the same rate as those who did not have them, neutralizing arguments that they have a "civilizing effect" on police interactions.

Instead, body cameras simply offer another layer of transparency, advocates and police representatives both argue.