The president of the union representing Baton Rouge police officers is lambasting Metro Council members for approving a settlement in a class-action lawsuit filed by protesters who were arrested in July, calling the deal of up to $100,000 a "slap in the face" to officers.

Sgt. Bryan Taylor wrote that the settlement — which covers bail fees, attorney's fees and other court costs for the 92 protesters in the suit as well as cash payments — was "ransom money" that sets a "dangerous precedent by opening the door to even larger out of state crowds." 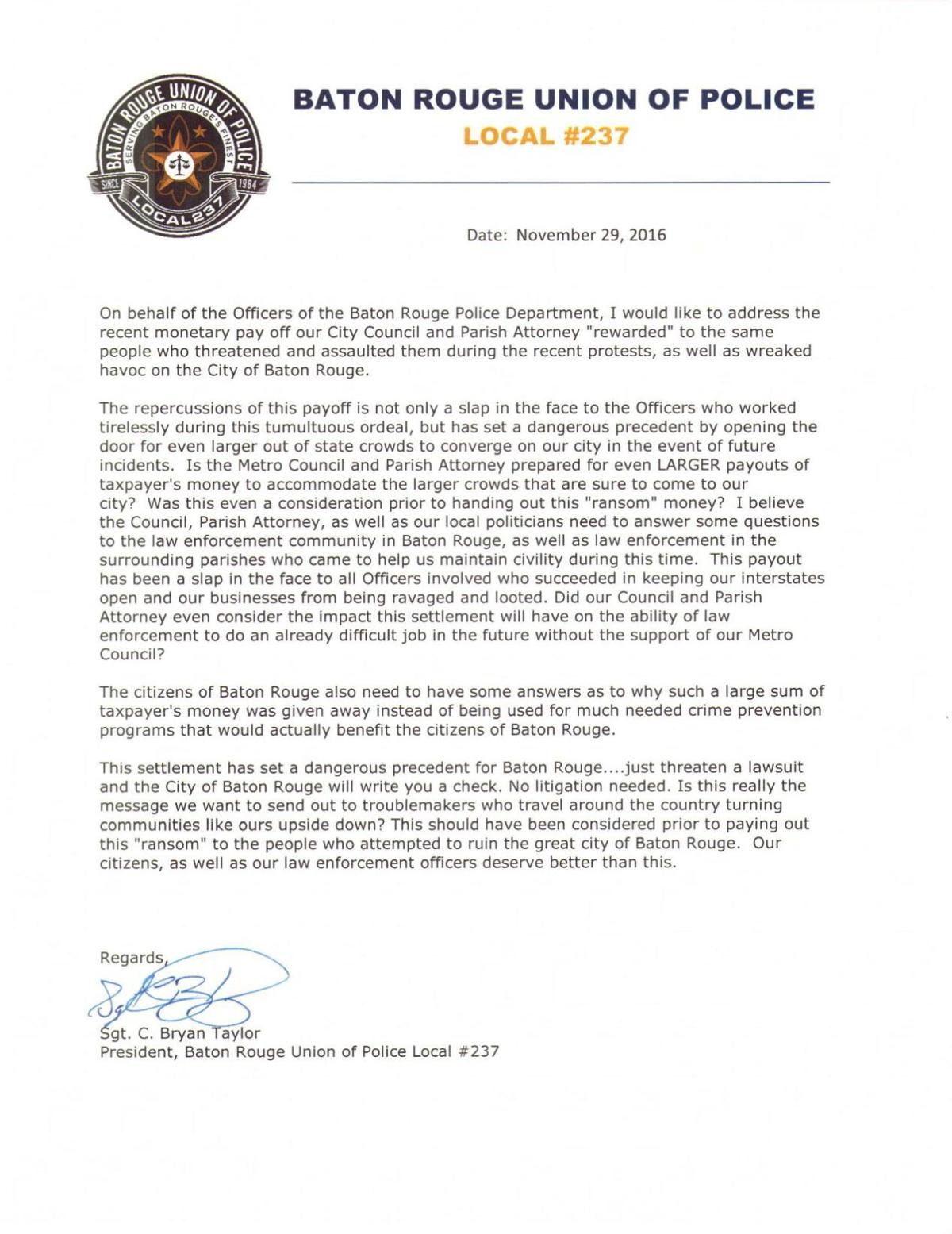 In a tweeted response to Taylor's comments, DeRay Mckesson, a national Black Lives Matter activist and one of the plaintiffs in the lawsuit, said the police union president "should redirect his energy to focus on making sure officers follow the Constitution."

The federal class-action lawsuit alleged that law enforcement used excessive force during the protests, made arrests without cause and violated demonstrators' civil rights.

But some details of the deal sparked controversy when Metro Council members were asked on Nov. 22 to approve the parish's portion of the deal, which is capped at $25,000 total and includes $230 each for the 92 plaintiffs.

The other three defendants in the lawsuit — the East Baton Rouge Sheriff's Office, the Louisiana State Police and the District Attorney's Office — also are paying up to $25,000 each.

Outgoing metro councilman John Delgado, who was endorsed by the police union in his unsuccessful bid this year for mayor, leveled similar criticism to Taylor's in voting against the deal when it came before the council for approval.

"To me, this encourages that type of behavior to happen in the future," Delgado said at the meeting. "I have no interest in paying $100,000 in taxpayer dollars to people who are coming into our city to protest."

Although Mckesson, perhaps the highest-profile protester involved in the lawsuit, is from Maryland, Parish Attorney Lea Anne Batson told the council that fewer than 10 percent of the 92 protesters involved in the suit are from outside Louisiana.

The protesters involved in the suit were arrested on misdemeanor counts of obstructing a highway during the demonstrations.

District Attorney Hillar Moore III announced that his office wouldn't prosecute those protesters, though the lawsuit notes that those arrested still spent time in Parish Prison and faced bail costs, administrative fees and additional costs to have their arrests expunged.

Many of those arrested during the several days of protests in early July were booked on one of two identical police reports, something legal experts have said may have posed a challenge to bringing their cases to courts.

Taylor, the union president, said in a letter released late Tuesday that the settlement money would serve as a perverse incentive for future protesters and said the Metro Council's 8-2 vote to approve the deal showed a lack of support for police.

"Is this really the message we want to send to troublemakers who travel around the country turning communities like ours upside down?" Taylor wrote. "This should have been considered prior to paying out this 'ransom' to the people who attempted to ruin the great city of Baton Rouge."

Batson, the parish attorney, told council members at the meeting that the settlement price tag is far less than the city would be forced to pay if just one of the 92 protesters successfully convinced a jury they were wrongfully arrested. The class-action agreement means the total cost per plaintiff will be less than $1,100.

On Tuesday, officials with the same agencies filed a memorandum of understanding with advocacy and activist groups in a separate federal lawsuit that was also filed over law enforcement's response to the demonstration.

That agreement, which will resolve the lawsuit, contained no monetary terms but outlined policies and protocols surrounding how law enforcement in Baton Rouge will handle future demonstrations. In the document, authorities affirmed the right to peacefully protest and agreed to avoid mass arrests.

But officials also reiterated that future demonstrators would again face arrest for stepping into major roadways or attempting to block a highway or interstate.

A third federal lawsuit, filed anonymously by a Baton Rouge police officer claiming he lost teeth and suffered other injuries during the protests, was filed earlier in November against Mckesson and Black Lives Matter. The term Black Lives Matter refers to an international protest movement over the treatment of black residents by police but is not a formal organization.

That lawsuit does not accuse Mckesson of injuring the officer — who it says was hit by a piece of concrete or "similar rock-like item" — but claims the activist "conspired to violate the law by planning to block a public highway" and "incited violence." No one has been arrested for allegedly hitting the officer.

After Alton Sterling case, state Rep. Ted James says this is how he'd like to reform law enforcement

In the Capital City and across the state, law enforcement officers have "room for improvement," Baton Rouge state Rep. Ted James said Monday a…