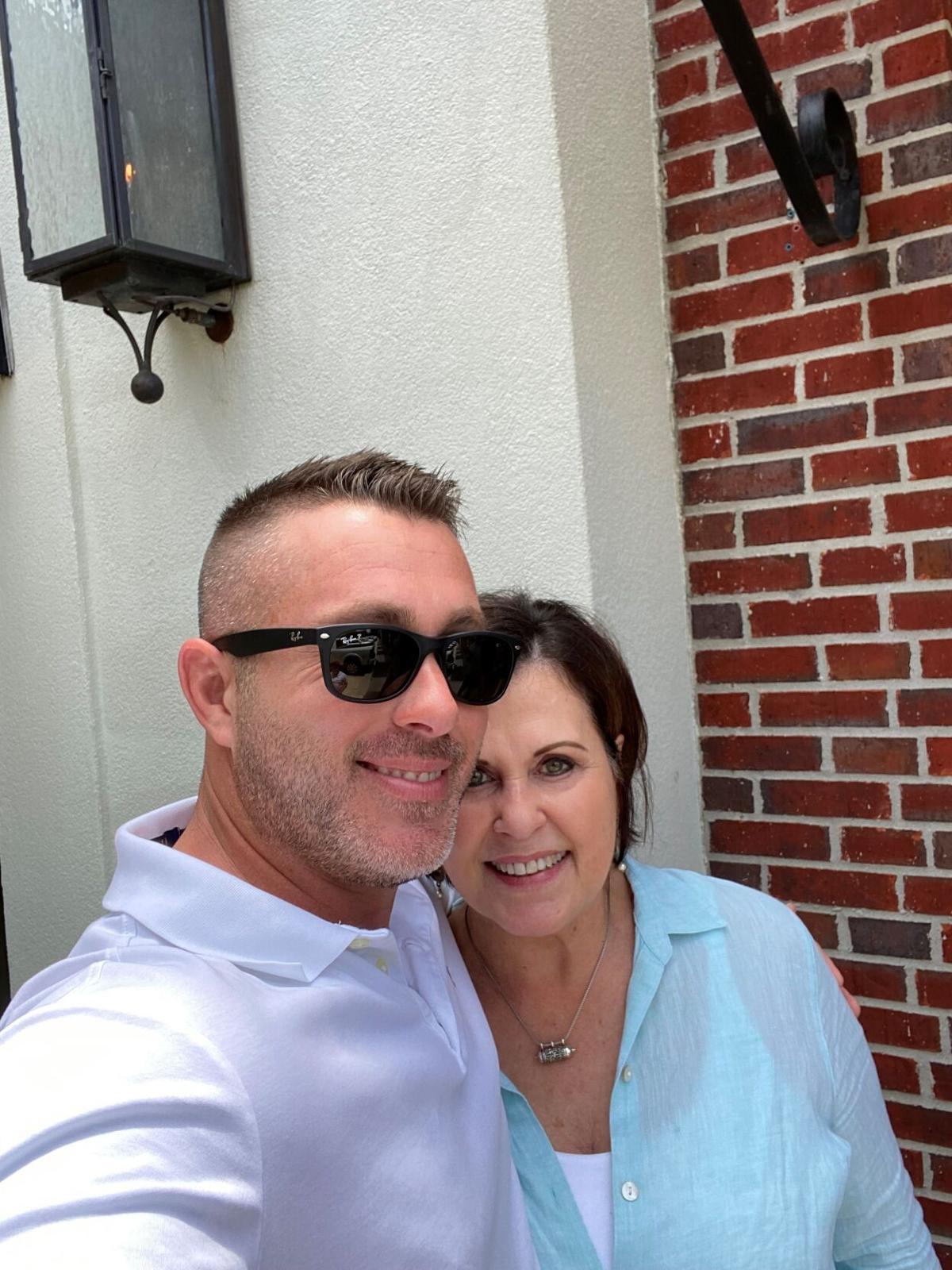 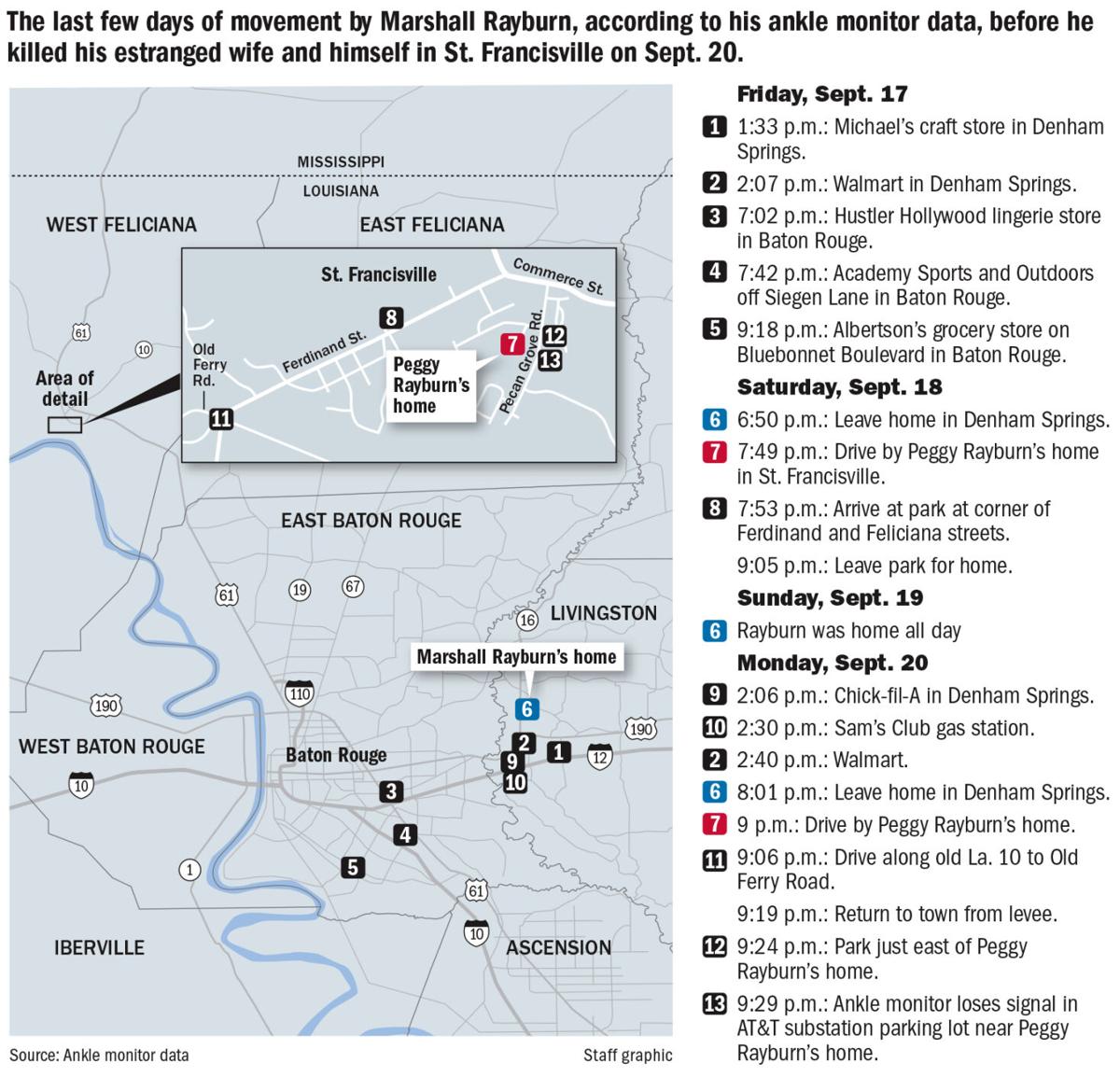 Three weeks before he shot his estranged wife to death inside her St. Francisville home and then turned the gun on himself, Marshall Rayburn violated a restraining order five times in one afternoon while surveying the future crime scene.

His court-ordered ankle monitor recorded all the violations, but he faced no consequences for ignoring the safeguards imposed after Peggy Beasley Rayburn accused him of repeatedly drugging and raping her during their 15-year marriage.

Three days before the murder-suicide, Marshall Rayburn ran some errands, including a stop at the Baton Rouge sex shop Hustler Hollywood.

Two days before the crime, he again violated the restraining order and again faced no consequences.

On the night of Sept. 20, Marshall Rayburn made his final move. He parked near the house on Ruth Street — his home too, until the recent rape arrest — and wrapped duct tape around his ankle monitor to kill the signal. Then he posted up in a backyard shed, toting a backpack packed with knives, zip ties and chloroform. When Peggy Rayburn stepped outside before bedtime, the man barged into her house.

But the company tasked with monitoring his whereabouts never notified authorities about the massive red flags — violations that likely would have landed Marshall Rayburn back behind bars and prevented the tragic outcome.

"My mom was murdered because this company did not do their job," her son Brandon Crow said. "Like, she would still be alive if they gave a s***. Literally no one was watching this guy at all."

When Peggy Beasley Rayburn realized her husband of 15 years had been routinely drugging and raping her, she was embarrassed and apprehensive a…

The company, American Electronic Monitoring based in Tupelo, Mississippi, came under fire after the shooting, which raised significant questions about how the system failed Peggy Rayburn, a great-grandmother and beloved longtime resident of St. Francisville. Recent messages seeking comment from company officials went unanswered.

Since her death, even more questions have surfaced about the patchwork system of ankle monitoring companies operating with minimal oversight across Louisiana.

In many jurisdictions, these private firms contract directly with criminal defendants, often charging hundreds of dollars a month for the service. Judges order such arrangements, but all too often, the oversight stops there, according to experts and officials.

In this case, Marshall Rayburn was assigned the monitor in August after posting bond on the rape counts.

After the murder-suicide, West Feliciana prosecutors filed a subpoena seeking documents from American Electronic Monitoring that will reveal the exact terms of the contract and details about how the company responded to apparent violations.

Since his Aug. 28 release from jail, records show Marshall Rayburn, 63, was staying at a house in Denham Springs. He had agreed to pay $250 a month for the ankle monitor and was explicitly forbidden from coming within 100 yards of the St. Francisville home belonging to his estranged wife.

But just days after his release, while the region reopened after Hurricane Ida, Marshall Rayburn violated the restraining order five times on Sept. 1. In between driving through her neighborhood, he crisscrossed St. Francisville running errands: stopping at the bank, medical clinic and pharmacy. He made a similar trip a week later, visiting the courthouse and post office. He also drove through the restricted zone late that morning.

The man was active during his last few weeks of life, despite suffering from a chronic lung condition that required constant oxygen treatment.

During a Sept. 10 outing, he visited a downtown Baton Rouge law office, then took a detour, driving along LSU's sorority row before returning home.

The monitor registered a "location loss" on Sept. 13, which lasted for almost two hours.

"In my mind, he was testing the waters, seeing what he could get away with," West Feliciana District Attorney Sam D'Aquilla said. "The problem is that the company never notified anybody about these violations. … In my opinion, this ankle monitor was totally worthless."

On Sept. 17, Marshall Rayburn made two outings, first leaving the house in Denham Springs around 1:30 p.m. and making several stops, including Michaels craft store and Walmart.

He left again shortly before 7 p.m. and drove to Hustler Hollywood off Airline Highway in Baton Rouge, a store that sells lingerie, sex toys and restraints along with raunchy party games and branded merchandise.

Marshall Rayburn spent about half an hour at Hustler, then drove to the Academy Sports on Siegen Lane and a grocery store on Bluebonnet Boulevard.

The following day, he stayed home until about 6:45 p.m., when he went to St. Francisville and again drove through the protected zone. He also spent about an hour in a nearby public park before driving back to Denham Springs.

On Sept. 19, the day before the murder-suicide, Marshall Rayburn stayed home.

The next afternoon, he went out around 2 p.m., stopping at a gas station, Walmart and Chick-fil-A in Denham Springs.

A few hours later, he made his final journey, driving straight to St. Francisville and arriving near the Ruth Street house about 9 p.m. He kept going through town, ending up near the levee on Old Ferry Road, where he hung out for about 15 minutes.

By 9:24 p.m., he was back in the protected zone, which caused his monitor to record another violation.

He parked at an AT&T substation near the house, according to law enforcement and the GPS records. There, he was caught on security footage duct-taping the device, which went offline after recording a "location loss" alert.

The GPS log contains no entries between 9:31 p.m. and 1:20 a.m. — presumably after law enforcement had responded to the murder-suicide scene, pronounced Marshall Rayburn dead and removed his ankle monitor.

Authorities said he spent the intervening hours hiding in an outbuilding until Peggy Rayburn stepped outside her house.

A neighbor rushed over after hearing her scream around 11:30 p.m. and found Marshall Rayburn holding a knife and chloroform-soaked rag, officials said. He soon opened fire on both women. After killing his wife, he sat down in her favorite armchair and turned the gun on himself. The neighbor was shot twice but survived.

For years before the deadly attack, Marshall Rayburn sexually abused his wife, according to police reports. When she contacted authorities this summer, Peggy Rayburn said he was drugging her with sleeping pills and raping her after she passed out.

The allegations gave law enforcement enough evidence to arrest Marshall Rayburn on a count of second-degree rape. Records show he was booked into the West Feliciana jail Aug. 4. But a few weeks later, he was released on bail — with seemingly stringent restrictions, including the ankle monitor.

Court-ordered GPS monitoring has become more popular within the past several years, in part a response to growing concerns about mass incarceration and costs of maintaining a burgeoning American prison population, experts say.

But the monitoring system is fraught with problems, not least its lack of meaningful oversight, said James Kilgore with the California-based Center for Media Justice, which tracks and scrutinizes the industry.

"If you look at any monitoring program across the country, you will find absolutely no effort whatsoever to study the impacts of these devices and whether they're effective," he said. "There's no evidence these programs do anything other than channel money into the pockets of monitoring companies and provide political cover for law enforcement."

However, Kilgore said blaming only the companies overlooks the bigger picture of a fundamentally flawed system — a system fraught with unreliable technology, which sometimes results in a crushing volume of false alarms that can overwhelm the employees responsible for tracking GPS data and responding to device alerts.

"These companies know they're selling snake oil," Kilgore said. "I think they're profiteers, but ultimately it's elected officials who contract with them, and the decision-makers don't want to hold anyone accountable."

In St. Francisville, local officials said American Electronic Monitoring has been contracting with criminal defendants for the past several years. But West Feliciana Sheriff Brian Spillman said he has no record of deputies ever being notified of any problems with defendants on ankle monitors — until the recent murder-suicide. Since then, Spillman said the company has started alerting law enforcement about various violations, like lost signals or dead batteries.

If deputies had any reason to believe Peggy Rayburn was in danger the night of Sept. 20, they absolutely would have saved her life, Spillman said. The sheriff recently sought to end an agreement between his office and the company pertaining to payment for monitoring indigent defendants.

"I feel these programs are unreliable and they're providing a false sense of security more than anything else," he said. "This is becoming a public safety issue for us."

Loren Lampert, director of the Louisiana District Attorneys Association, said the organization is looking into potential statewide legislative changes that could provide more oversight of monitoring companies. He said the first step is researching best practices in other states and coordinating with judges and law enforcement.

Meanwhile, for the family of Peggy Rayburn, the coming months promise an excruciating combination of grief and legal battles.

Her three adult children have been cleaning out her house, which they plan to sell, and meeting with lawyers and law enforcement.

In the hours before her death, Peggy Rayburn had ironed an outfit, which she left hanging in the bathroom, her son said. She packed herself lunch in plastic containers — preparing to babysit her great-granddaughter the next day.

"She had plans, things she wanted to do," her son said. "She didn't have to die."