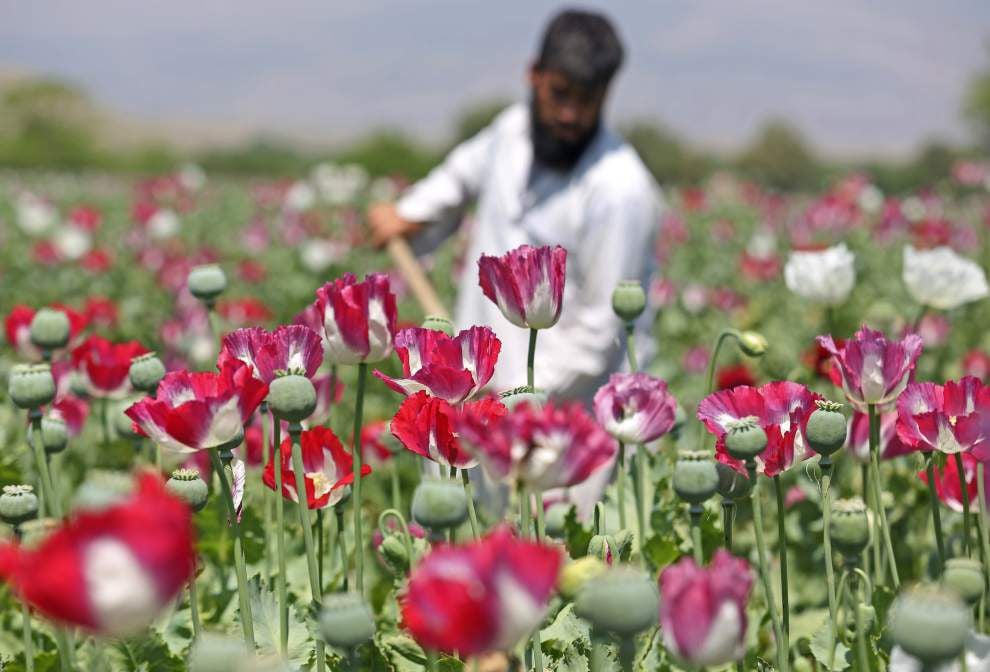 In this picture taken on Thursday, April 17, 2014, an Afghan farmer works on a poppy field harvesting opium, the main ingredient in heroin, in the Khogyani district of Jalalabad, east of Kabul, Afghanistan. This years bumper crop represents one of the most tangible and visible failures of U.S. policy in Afghanistan, as the American-led military force prepares to withdraw by the end of this year. (AP Photo/Rahmat Gul) ORG XMIT: XRG105 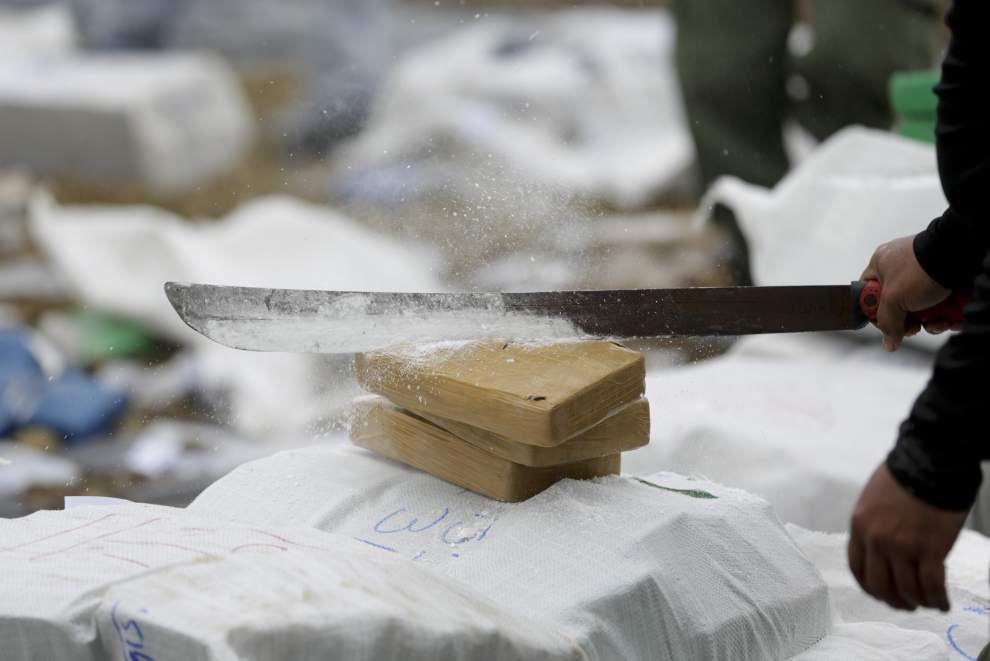 A police officer hacks open packages of cocaine with a machete before they're burned in Panama City, Friday, Oct. 16, 2015. According to National Police, they destroyed at least 10 tons of cocaine, marijuana and heroin seized nationwide over the past month. (AP Photo/Arnulfo Franco) ORG XMIT: PAN105 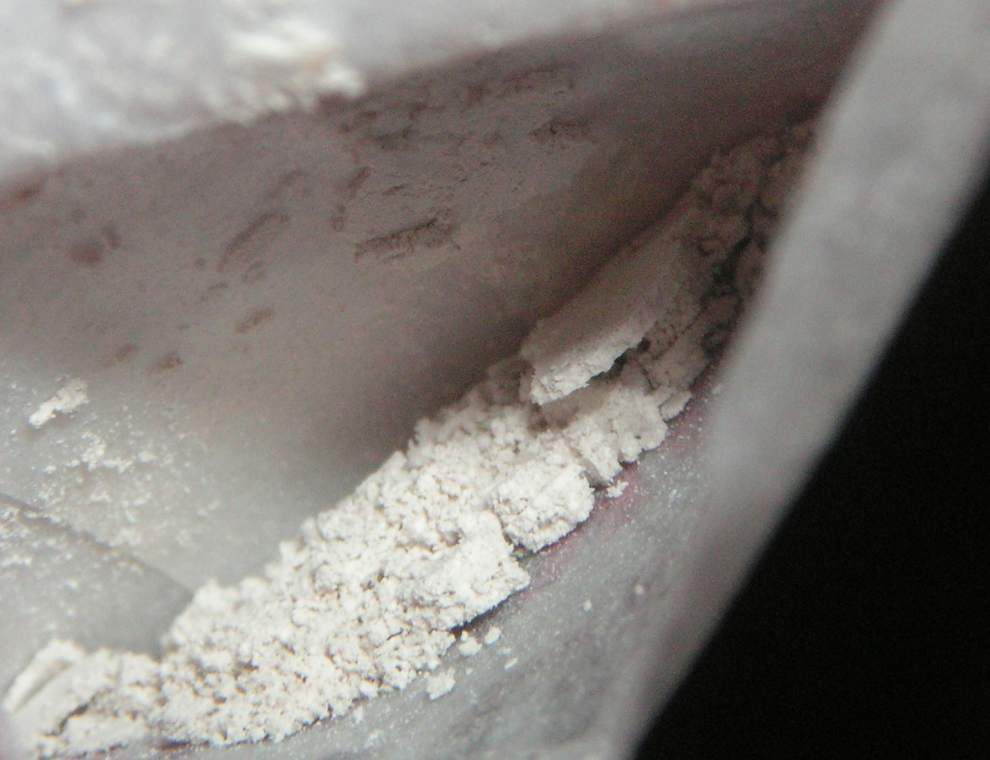 Photo provided by WikiCommons -- One Stamp of heroin (Diacetylmorphine) which typically costs $10-$20. 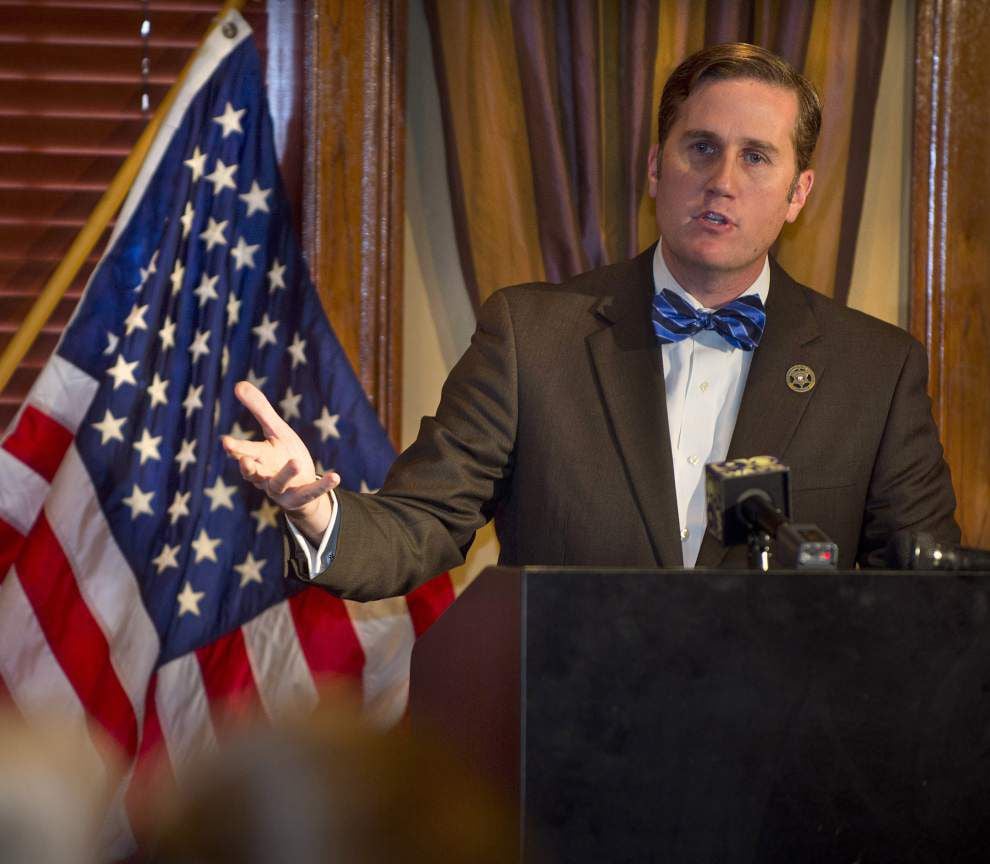 In this picture taken on Thursday, April 17, 2014, an Afghan farmer works on a poppy field harvesting opium, the main ingredient in heroin, in the Khogyani district of Jalalabad, east of Kabul, Afghanistan. This years bumper crop represents one of the most tangible and visible failures of U.S. policy in Afghanistan, as the American-led military force prepares to withdraw by the end of this year. (AP Photo/Rahmat Gul) ORG XMIT: XRG105

A police officer hacks open packages of cocaine with a machete before they're burned in Panama City, Friday, Oct. 16, 2015. According to National Police, they destroyed at least 10 tons of cocaine, marijuana and heroin seized nationwide over the past month. (AP Photo/Arnulfo Franco) ORG XMIT: PAN105

Photo provided by WikiCommons -- One Stamp of heroin (Diacetylmorphine) which typically costs $10-$20.

Three days before Christmas, John Allen Smith and his girlfriend decided to shoot up heroin at a Baton Rouge motel. With her 1-year-old son asleep in the motel room, a Baton Rouge police report says Smith prepped a needle and injected her.

But the dosage seemed to be off. At 3:29 a.m. the next day, Smith called a friend for help: His girlfriend’s breathing had slowed, she was not responding and probably overdosing.

When his friends arrived at the motel room 40 minutes later, according to a police report, they found the woman barely breathing on the bed, her skin turning purple and her tongue swollen. Despite friends urging him to call 911, Smith refused, saying he feared ending up in jail.

His friends called 911 on their own, but security footage from the motel shows that Smith carried his girlfriend to the car in the parking lot, where he sat for a half hour as firefighters rushed past, the report says. The woman’s possible savior was Smith’s mother, who arrived and eventually dropped the woman and her infant son off at Our Lady of the Lake Regional Medical Center, about 90 minutes after Smith called his friends.

The woman’s potentially life-threatening overdose — a police report indicates she survived — illustrates the harrowing dangers faced by heroin users in the Baton Rouge area, who statistics show are dying in greater numbers than ever before. But advocates for addicts say it also demonstrates a fear among users that calling for help when a friend or loved one overdoses can lead to arrest, prosecution and lengthy prison sentences for heroin-related crimes.

Emergency room doctors in Baton Rouge say it’s fairly common to see overdose patients dropped off in front of a hospital by friends who quickly speed away. Even when friends or fellow users stick around, paramedics and doctors say, it can be tough to get honest information on what drugs triggered an overdose.

Against that backdrop comes some high-profile arrests and prosecutions in Baton Rouge fatal overdose cases, including several cases in which defendants who injected a partner or friend were booked by police on murder counts. A section of Louisiana’s second-degree murder statute, once little used, allows arrest and prosecution for second-degree murder if the distribution or dispensing of an illegal drug is the direct cause of a death.

One defendant, Jarret McCasland, was convicted last fall of second-degree murder in the 2013 heroin overdose death of his 19-year-old girlfriend. He was recently sentenced to life in prison without parole. Other cases have had prosecutors or grand juries reduce the charges, opting for distribution counts instead, although those can also result in long prison stays.

“It’s absolutely counter-productive,” Logan Kinamore, the director of the group No Overdose Baton Rouge and an advocate for public health services for drug addicts, said about these criminal cases. “It disincentivizes calling 911.”

Encouraging users to call for help can be crucial, advocates say, because heroin and other opioid overdoses are treatable if caught early.

An antidote drug, Naloxone, can quickly reverse the effects of an overdose and is often described as a virtual miracle drug by those who’ve deployed it.

If found guilty, that charge carries a minimum of 10 years in prison without benefit of probation or parole under increased penalties passed by the Louisiana Legislature in 2014.

Smith, 28, remains in East Baton Rouge Parish Prison, where he’s being held in lieu of $50,000 bail. His attorney declined to comment on the case. Attempts to reach his girlfriend were unsuccessful.

“It’s emblematic of a hard stance on prosecution and a strong police stance on heroin,” said Franz Borghardt, a Baton Rouge defense attorney, of the decision by police officers to book Smith for attempted murder. “The way the city and the parish and the DA’s Office is treating heroin prosecutions right now, that had to enter into the calculus of the arresting officer.”

Several other states, including Wisconsin, New Jersey and New Hampshire, allow authorities to bring murder charges against dealers in overdose cases, though the enforcement of the law elsewhere has been controversial.

Last year, 32-year-old Brandon Eirick, who was initially booked by Baton Rouge police on a second-degree murder count and indicted on manslaughter charges, received a six-year prison term after pleading guilty to negligent homicide and distribution of heroin in the overdose death of Leah Hutchinson, his girlfriend.

Police had found both Eirick and Hutchinson unresponsive in a vehicle on Florida Boulevard in 2013 after the pair injected heroin.

“They were able to bring you back but not her,” state District Judge Bonnie Jackson told Eirick during sentencing. “It could easily have been the other way around.”

During the hearing, Jackson imposed a full 20-year prison sentence on Eirick, but suspended all but six years. Eirick was able to receive a sentence below the new 10-year minimum because he was arrested in 2013, before the law was changed.

A Baton Rouge grand jury indicted Marc Roussel on counts of possession of heroin and possession with the intent to distribute heroin in July 2014, but declined to bring charges of second-degree murder or manslaughter in the February 2014 overdose death of Guy Koontz, a friend whom Roussel allegedly injected with about a half gram of heroin.

The drug case against Roussel is still pending.

An attorney for McCasland, Rodney Messina, filed a motion last week calling the sentence handed down to his client — who received a mandatory prison term of life without parole — “cruel and unusual,” arguing that the state’s murder statute is out of step with the rest of the country, and that charging McCasland with second-degree murder was a “misuse of prosecutorial discretion.” Moore dismissed those allegations and defended his office’s handling of the case.

The number of people dying from heroin overdoses numbered in the single digits as recently as 2012 before spiking dramatically. In 2015, 41 people died of heroin overdoses, believed to be the most ever in the parish, said Dr. William “Beau” Clark, the East Baton Rouge Parish coroner and an outspoken advocate of tougher penalties for those caught selling the drug.

“Our first concern is with the health and safety of the individual who has overdosed,” he said.

“We’re not going to arrest somebody if they call, somebody has overdosed and there may be some drugs around,” said Dunnam. “We definitely don’t want to deter anybody who’s in a situation like that, if they’re with a friend who’s overdosed, from calling police.”

Yet Dunnam also said officers won’t shy away from making arrests when there’s evidence a suspect injected someone else with heroin.

“The laws are there, and we’re going to follow the law,” Dunnam said.

In Smith’s case, his efforts to hide his girlfriend from paramedics and police played a large role in deciding to arrest him, Dunnam said.

“Had he stayed there, had he cooperated and assisted the first responders, then maybe none of this would’ve come about,” Dunnam said.

Moore emphasized how difficult the heroin use problem has become.

“The state of Louisiana and the people here (in East Baton Rouge Parish) need to understand how large this problem is,” said Moore. “I think that the increase (in heroin use) is driving an increase in violence in Baton Rouge.”

But Daniel Raymond, policy director for the New York-based Harm Reduction Coalition, argued arrests for murder or manslaughter of those who used heroin with overdose victims won’t help reduce the number of people dying from overdoses. This kind of aggressive reaction goes against more public health-oriented approaches that other states are beginning to embrace, he said.

“It serves no public interest to charge that person for second-degree murder, homicide or manslaughter,” Raymond said of cases like the ones against McCasland and Eirick. “It’s not going to bring the overdose victim back, and it’s not going to do anything to prevent future overdoses — but it does send a strong message that the state of Louisiana would rather see people in overdose situations locked up than getting help.”

“I’m not real sympathetic to that argument but I understand it,” said Moore, who stressed that his office frequently seeks to divert low-level drug offenders to treatment programs and sometimes uses the threat of prison time to push addicts to seek help.

In cases where his office can prove someone directly provided the lethal dose of heroin, Moore said he sees a second-degree murder charge as appropriate.

“It’s just like putting a gun to their head but you’re using a needle,” said Moore, who compared shooting someone up with heroin to playing Russian roulette.

Kinamore said the so-called good Samaritan law passed into law in 2014, which protects those calling from help from arrest for simple possession but not more serious counts like distribution, hadn’t done much for the drug users he works with to encourage calling for help.

In large part, Kinamore said, that’s because users continue to be arrested — and because high-profile arrests and prosecutions in drug deaths suggest very real risks to being associated with an overdose.

“There are so many loopholes in (the law) that users don’t trust it,” Kinamore said. “People are still afraid to call 911 in the case of an overdose.”

Fentanyl has caused at least 13 overdose deaths in Lafayette this year, more than quadrupling the number of people killed last year by the dru…