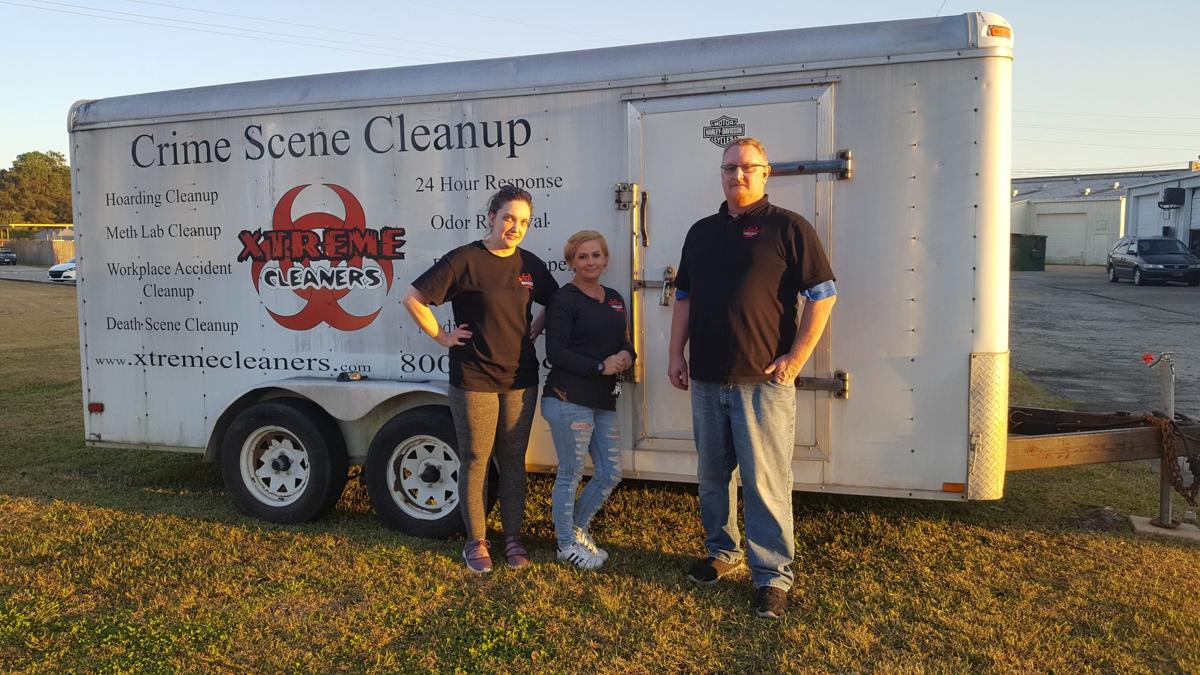 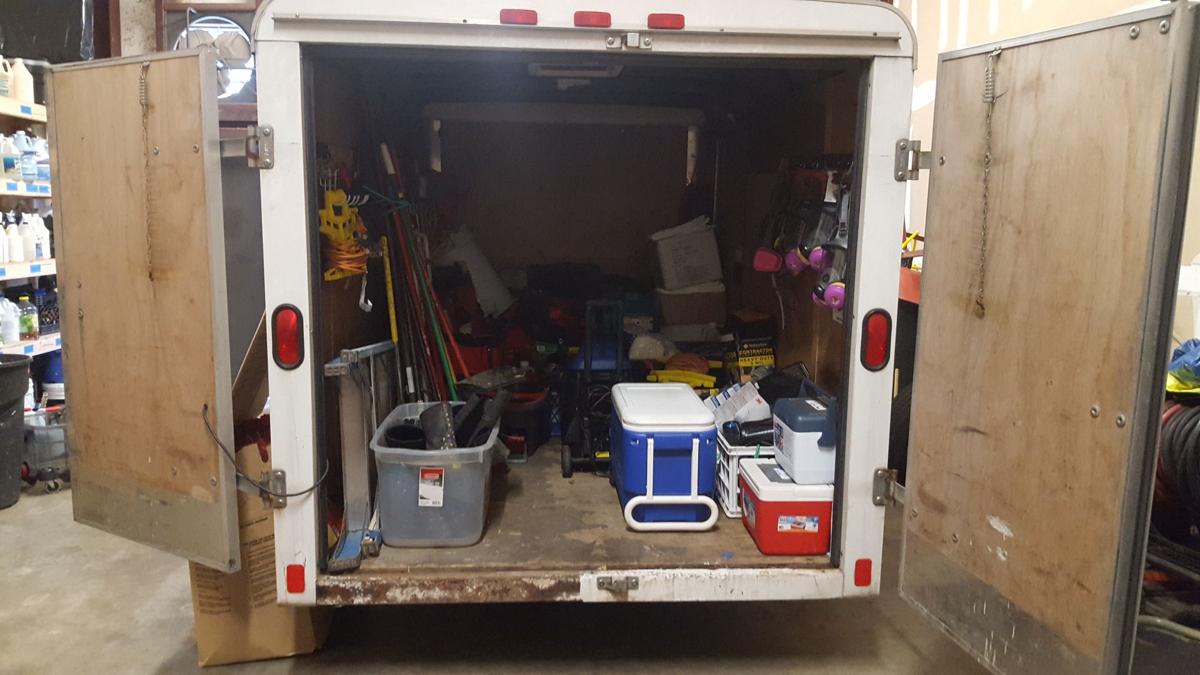 The inside of one of the XTREME Cleaners trailers, filled with crime scene cleanup supplies.

The inside of one of the XTREME Cleaners trailers, filled with crime scene cleanup supplies.

Larry Douglas has an unusual job.

As president and CEO of Baton Rouge-based XTREME Cleaners, he dispatches staff to clean up what are often gruesome crime scenes once the police are gone. They do cleanup that otherwise would fall to grieving survivors, friends and neighbors.

He recognizes how important the service can be to suffering loved ones, recalling in a recent interview an experience at a particularly horrific scene at a house in Livingston Parish several years ago.

Four people, including a 2-year-old boy, had been killed after a family member went on a killing rampage, he said.

While at the house, Douglas took a call from surviving family members. They told him the only thing they wanted from the scene was the little boy’s cowboy boots, which were like the ones worn by the character Woody from the Disney-Pixar movie ‘Toy Story.’

Douglas hung up the phone and turned to his team.

“That’s our mission,” he said.

For the next 15 minutes, his workers scoured the home, focused intensely on finding the boots. This was not necessarily the usual order of business when dispatched to a trauma scene, but they took the request seriously.

When they at last found the boots, Douglas called the family back. They were so grateful, he remembers, that they would be able to bury the boy with his most prized possession.

The experience also moved the men and women working for Douglas, who spend their days cleaning blood and gore in the most sobering of circumstances.

“A couple of the employees said, ‘You know, this was just a job for me before. But now, I realize it’s more than just the job,’ ” Douglas said.

After a homicide — or a suicide, car crash or what is known in the business as an “unattended death” (when someone dies, and the body is not found for some time) — people often call in experts, like Douglas’ company or a national trauma cleanup business called Aftermath Services that regularly deploys teams to Louisiana.

That is, if they can afford it.

Though companies like Douglas’ may offer a lower price when people don’t have insurance, sometimes the onus of cleaning a violent crime scene falls on the grief-stricken family, friends or sympathetic neighbors.

“Some people can’t afford it,” said Baton Rouge Police Department spokesman Sgt. L’Jean McKneely Jr. “That’s really hard. They have to take it upon themselves to go and clean that scene, or just rely on a family member to assist them."

Tina Bao, chief revenue officer for Aftermath Services, said there are two widespread misconceptions when it comes to trauma cleanup.

“One is that police will take care of the situation for you after they clear out the crime scene,” Bao said. “The second is that crime scene cleanup is actually just a very small portion of what we do. It’s used as a broad term to describe the industry, but most of what we do can be perceived as blood or death cleanup.”

Sterilizing messy trauma sites does not fall under the purview of law enforcement, emergency medical services or the coroner’s office, a fact many families in the midst of dealing with a loved one’s death often do not realize.

Douglas said he ended up as a crime scene cleaner after, as a law enforcement officer, he witnessed a mother’s numb exhaustion after her son died by suicide.

Cpl. Sherri Harris, who works with the Baton Rouge Police Department’s victim services unit, said her team often arrives on a scene to find that family members or neighbors have stepped in to clean whatever remains after the body has been removed.

They act out of expedience and necessity, she said, rushing to clean up a scene before a spouse returns home or a child glimpses their parent’s remains.

“Once they know that the scene has been declared safe for anyone to enter, and they’re not contaminating any type of evidence that needs to be collected, they spring into action,” Harris said. “You’re looking at protecting the loved one, because that’s just retriggering that trauma all over again.”

Still, some local agencies have found their own way to help grieving families reckon with a recent loss despite the limited role for local government.

Shane Evans, chief investigator for the East Baton Rouge Parish Coroner’s Office, said by Louisiana law, the coroner’s job is to investigate the cause and manner of death and take custody of the body. However, his office tends to do more for the sake of the families suffering in the wake of a loved one’s violent death.

“Our job by law is what we talk about, right?” Evans said. “But what we actually do — because we’re human beings and we care — is we spend a whole lot of time grief counseling, walking families through what’s next.”

When people experience an unexpected traumatic loss, Evans said, the Coroner’s Office hands out a pamphlet titled “Information for Families” that lists several crime scene cleanup companies the office has vetted, noting the companies that are willing to work with insurance.

Other agencies, though it is not their jobs, help in their own way. Evans recalled times when Baton Rouge police detectives and deputies with the parish Sheriff’s Office have called the city Fire Department to hose down a street after a brutal incident.

“No, it’s not written in procedure; it’s just being a good human,” he said. “Because we know there’s going to be little kids catching the bus there the next day.”

For some families, Evans said, cleaning up their loved one’s remains is an important step in the grieving process.

“Some families just say, 'I’m going to clean this up. This is my child. I want to clean up,' ” he said. “They have that need to help their loved one that’s passed away, and cleaning up after the death is their way of doing it.”

Evans recalled being fussed at a year ago by the father of a young man who had been killed.

“He said, ‘It really would have meant a lot to me if I could have helped you load my son in the van,’ ” Evans said. “You never know, person to person.”