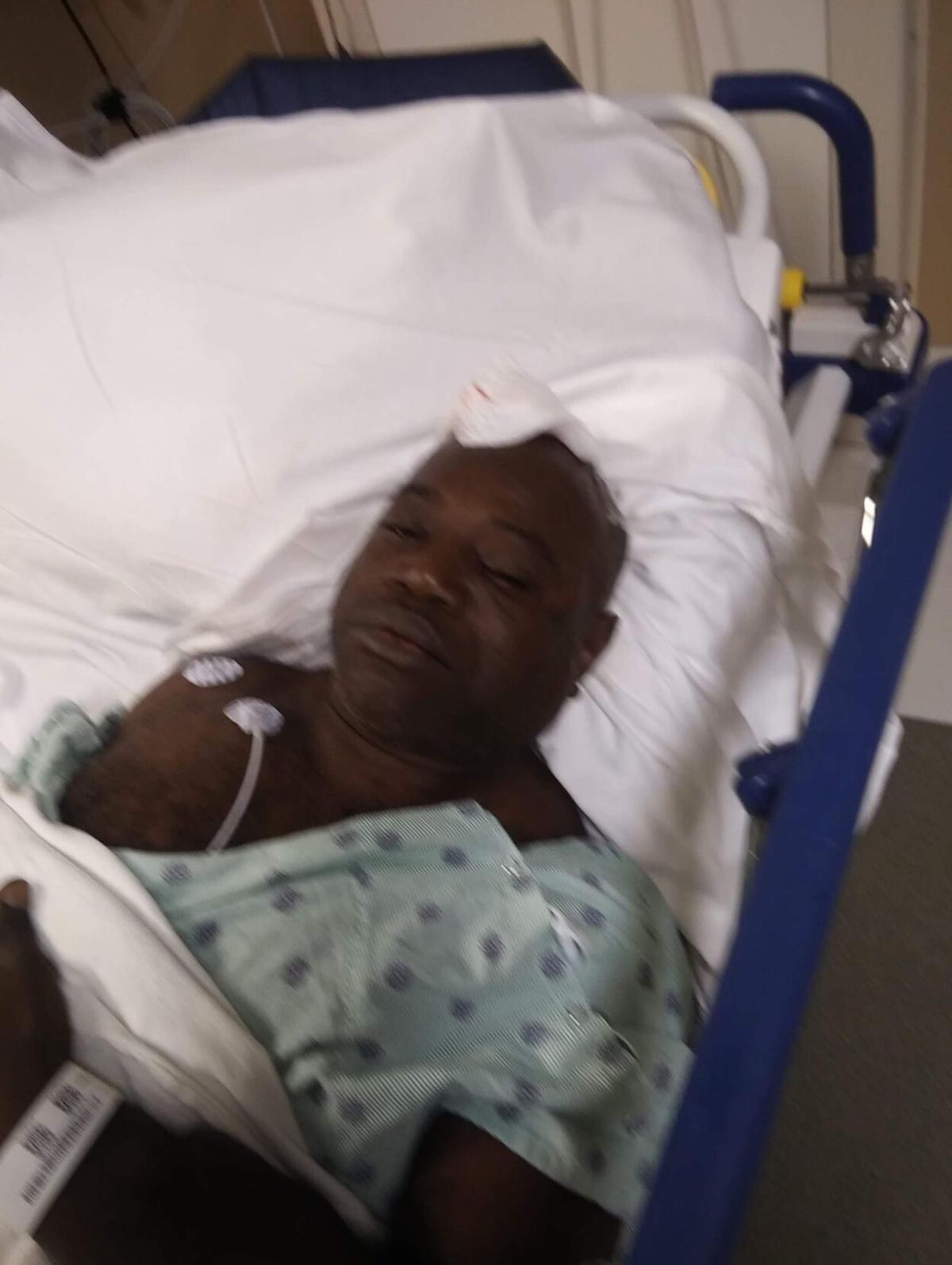 Aaron Larry Bowman was hospitalized following a May 2019 beating he says was at the hands of various law enforcement agencies, including State Police. 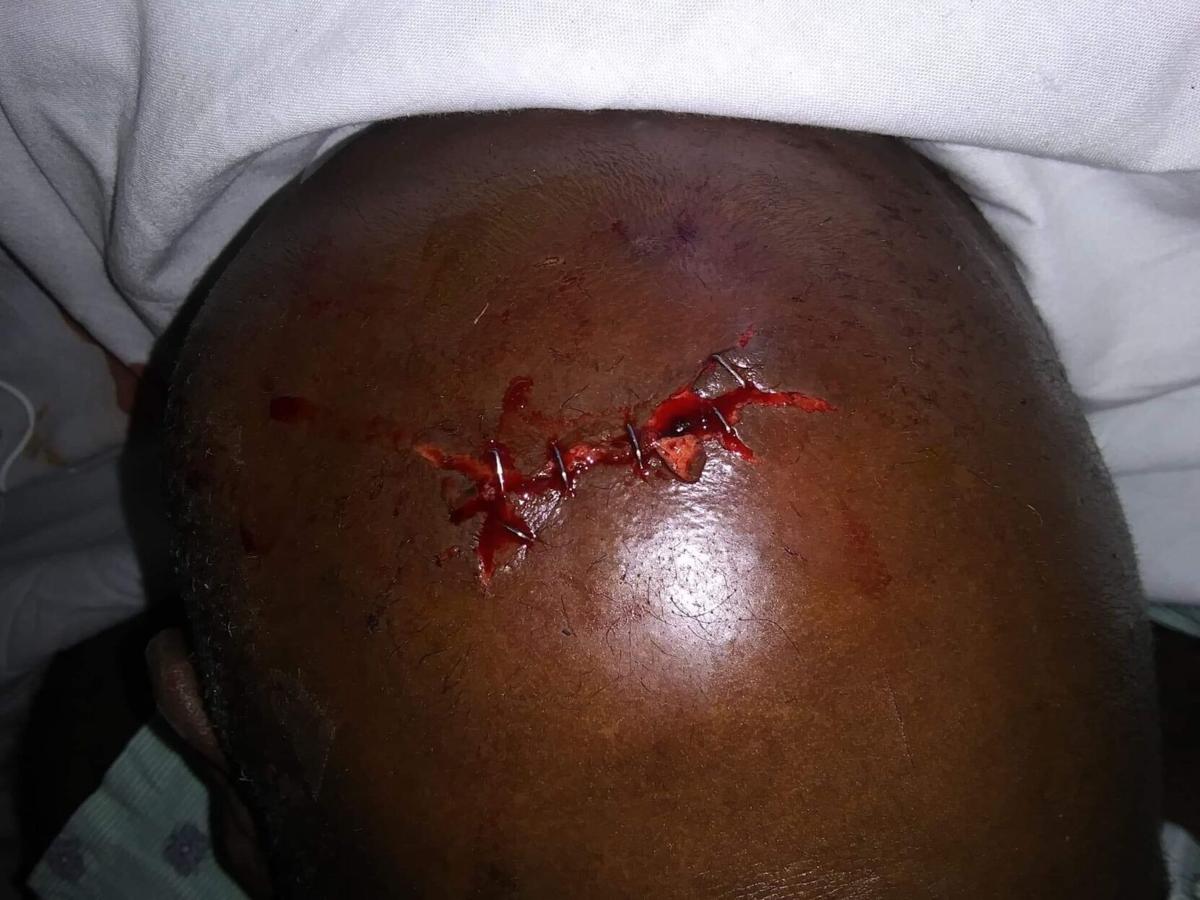 A laceration on Aaron Larry Bowman's head. He says in a lawsuit he received the injury after a beating in May 2019 from a law enforcement team, which involved State Police.

Aaron Larry Bowman was hospitalized following a May 2019 beating he says was at the hands of various law enforcement agencies, including State Police.

A laceration on Aaron Larry Bowman's head. He says in a lawsuit he received the injury after a beating in May 2019 from a law enforcement team, which involved State Police.

After a White Louisiana State Police Officer was arrested for allegedly beating a Black man 18 times with a flashlight, the man's attorney said other officers were involved and should also be investigated.

State Police officials announced Thursday that Trooper Jacob Brown, 30, was involved in a "use of force incident" in May 2019 in Monroe — the latest in a series of racially charged controversies at State Police.

An internal investigation was launched this October after LSP was notified of a lawsuit alleging excessive use of force by an unnamed state police trooper. That spurred a criminal investigation; Brown was arrested on one count each of aggravated second-degree battery and malfeasance in office.

A State Police Trooper has been arrested, accused of "excessive and unjustifiable actions" during an arrest last year, officials said Thursday.

"Detectives learned that Brown engaged in excessive and unjustifiable actions during the incident and failed to report the use of force to his supervisors," said Lt. Nick Manale, State Police spokesperson.

Brown, a trooper at Troop F in Monroe, remains on administrative leave.

Manale would not give further details of that May 2019 encounter, citing pending criminal, civil and administrative proceedings. He said Friday that no other troopers were involved in the incident.

Warning: Some content and language used in the below video are graphic.

State Police did not identify the victim. But a newly released arrest warrant for Brown names 45-year-old Aaron Larry Bowman as the victim — and outlines the State Police investigation of one of their own.

Court documents for Bowman's later arrest say officers followed Bowman to his home in Monroe with lights flashing to initiate a traffic stop after he allegedly crossed the center line in the road. Bowman told authorities afterward that he "saw the lights and [heard the] audible sirens but was scared to pull over," so he continued to his home where officers followed him into his driveway.

Bowman's arresting documents say he at first refused to get out of his car, telling officers he did nothing wrong, but eventually complied. However, when the officer tried to handcuff him, Bowman allegedly pulled away to avoid arrest.

A "brief struggle" began, during which Bowman swung his arms and yelled that he had done nothing wrong, the documents say. It is not clear if this is the point when Brown arrived in his LSP unit, but the trooper's arrest warrant says that when he showed up at the scene he saw three officers “attempting to detain Bowman," appearing to wrestle with him on the ground and straining to handcuff him.

However, by the time Brown walked up to the scuffle, Bowman was lying on the ground with his hands placed on the pavement in front of him while several officers held his neck, head and back trying to cuff him, the warrant for Brown says.

Body camera footage showed that Brown then struck Bowman on the head with his flashlight, according to his warrant. When Bowman tried to cover his head to protect himself, Brown hit him again on the hand shielding his skull, then two more times, it says.

The warrant says Brown hit Bowman a total of 18 times with the flashlight, including jabbing him in the shoulder and side. He also cursed at Bowman multiple times.

“The flashlight that Brown used was unique in that it was equipped with a special tip, known as a tactical tail cap, which attaches to the end of a flashlight and is designed to break automotive safety glass,” the warrant says.

Bowman suffered “multiple lacerations,” which include “a cut to the top of his head, a fractured arm, and broken ribs,” according to the civil lawsuit. He was taken to the hospital, where his head wound required several stitches.

Investigators who reviewed the body camera video said Bowman, while he was resisting, did not appear aggressive toward the officers and that Brown seemed to be the only one who struck him.

However, Bowman's arrest warrant, written by a Ouachita deputy named in the civil lawsuit, says Bowman struck him on the head "with a closed fist," and "pulled his arms under his body" to avoid the handcuffs. Neither of these incidents were witnessed by body camera footage, according to the arrest warrant for Brown authored by State Police.

Brown later told investigators in late November of this year he used the flashlight as “a baton” and claimed Bowman struck a deputy while they were taking him to the ground, his the warrant says. The strikes were used for “pain compliance,” Brown said, to make Bowman move so he could be cuffed. He also said he did not believe Bowman was armed.

Additionally, investigators learned Brown did not document the incident in state police reports, “miscategorized” the body camera footage and failed to label the recording, which they said “show an intentional attempt to hide the video from any administrative review or criminal investigation.”

Bowman was not arrested on scene, but officers filed for an arrest warrant several days after the incident, according to court records.

He was booked into jail that July on improper lane usage, aggravated flight from an officer and resisting an officer — all misdemeanors — and battery of a police officer, which is a felony. His bond was set at $4,650.

Bowman claims in his lawsuit officers had asked if he had "anything on him" after the initial traffic stop, which Bowman understood to be "drugs or weapons," the lawsuit says. He told them he had none; a search of his vehicle later on uncovered nothing illegal, his warrant said.

Click here for a photo of Bowman's head injury. WARNING: This image is graphic.

Banks-Miley said Thursday night that she anticipates more arrests in the incident due to the number of officers involved. The traffic stop was executed by the Ouachita Parish Sheriff’s Special Crimes Apprehension Team (SCAT), a group that includes State Police, according to the civil lawsuit.

“Obviously we’re happy that we’re moving in the right direction, but we do believe that there will be more arrests,” she said. “We believe more officers are involved, if not in the direct beating of Mr. Bowman, definitely in the covering up...the failing to report.”

An official with the Ouachita Parish Sheriff's Office did not respond for comment by publication of this article.

Banks-Miley put out a press release after the State Police announcement on Thursday, demanding both “body camera footage and full accountability of all officers...who either participated in Mr. Bowman’s unjustified beating or conspired to cover up the incident by failing to report the actions of the officers involved."

After several recent Black Lives Matter protests in Baton Rouge, activists and attorneys took their demands to the highest levels of state gov…

The original complaint named only one law enforcement officer — the Ouachita Parish Sheriff's Office deputy who said Bowman hit him in the head — and unnamed officers in SCAT, as Bowman was unable to identify all those involved in the alleged assault. Banks-Miley said Brown's name will be added to the complaint now that he has been identified.

“We hope to obtain full justice for Mr. Bowman and will continue to fight in this heinous battle to end police brutality,” she said in the release.

Bowman, a dialysis patient, continues to suffer both physically and mentally from the attack, Banks-Miley said.

“As soon as you speak about this, he cries, just reliving it,” she said. “We are trying to get him the help that he desires.”

Brown's arrest is the latest in a series of scandals that have swept State Police in recent months, several of which involved a failure or delay in disciplinary action or investigations from state police leaders.

Twenty days before Bowman’s alleged beating, Ronald Greene, another Black man in his 40s, died in state police custody after an encounter with officers from the same troop as Brown. Troopers initially blamed his death on injuries sustained during a crash following a police chase in Monroe, but Greene’s family has filed a lawsuit alleging Greene was beaten to death.

Federal investigators have opened a civil rights probe into the encounter, and one of the troopers involved in the incident — who later died in a car crash — was placed on leave several months after the family filed the lawsuit.

State Police has also faced recent allegations of racist language and sentiments among troopers, a trooper's indictment after shooting an unarmed teenager during a traffic stop and a fatal car crash involving the former State Police superintendent's son.

A Black trooper with the Louisiana State Police was on a break when his cellphone buzzed with an unusual voice message. It was from a White co…

That superintendent, Col. Kevin Reeves, retired abruptly in October shortly after news of the Greene investigation broke. Gov. John Bel Edwards said in the announcement that Reeves has been planning for retirement since the previous year. There had been a vocal and public outcry for Reeves' resignation in the aftermath of Greene's death.

Davis issued a statement Thursday following the announcement of Brown's arrest, reinforcing the importance of "public trust and responsibility" given to law enforcement.

"We owe not only the public we serve, but also the dedicated men and women of our department a just and timely response,” he said.

'This is God's plan:' New State Police head surprised and humbled to be leading agency

A grand jury indicted a Louisiana state trooper Thursday in the shooting of an unarmed teenager two years ago, saying she was wrong to fire he…