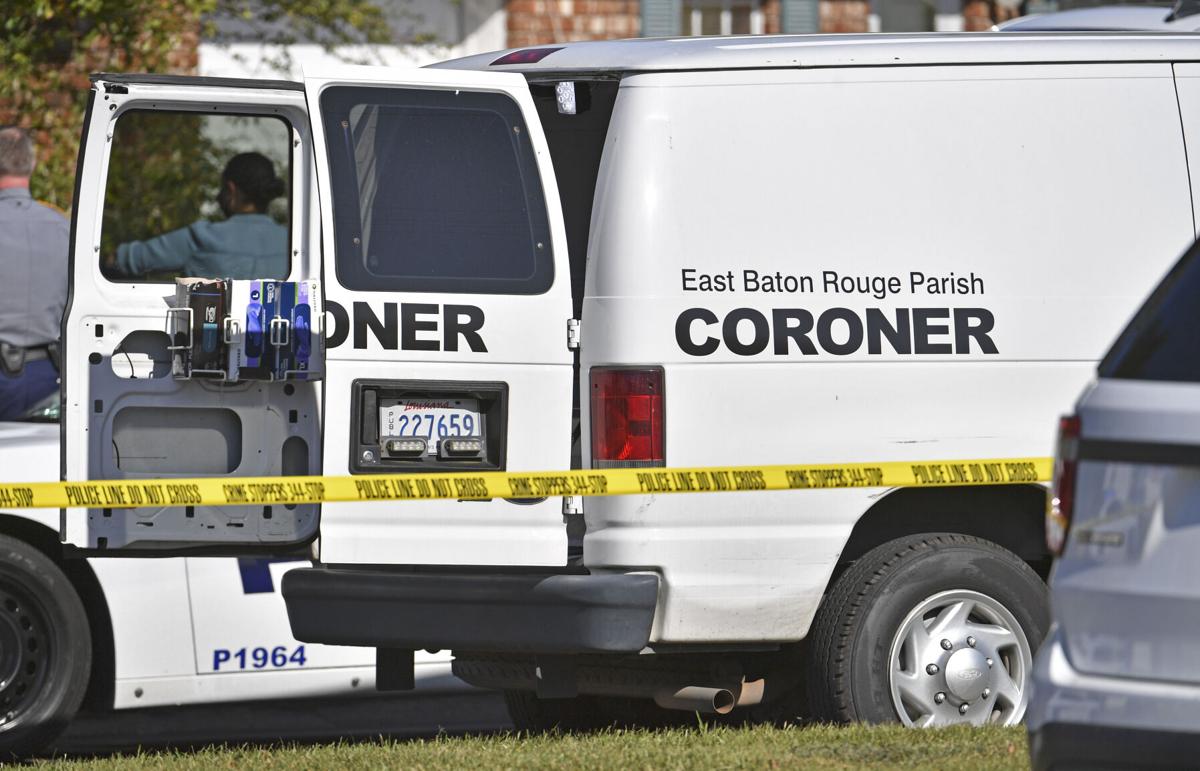 The coroner's office arrives on scene as Baton Rouge Police investigate the scene of a double homicide, Friday, November 20, 2020, on Sherwood Forest Boulevard near the Wise Communications business in Baton Rouge, La. 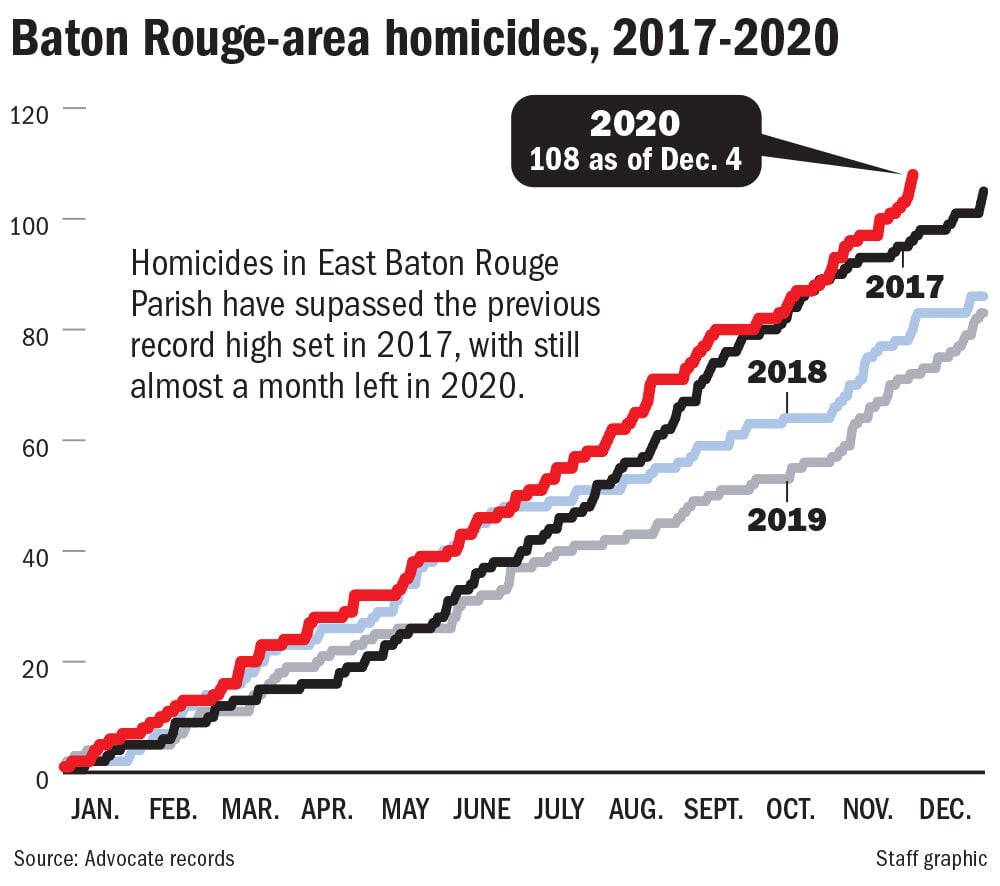 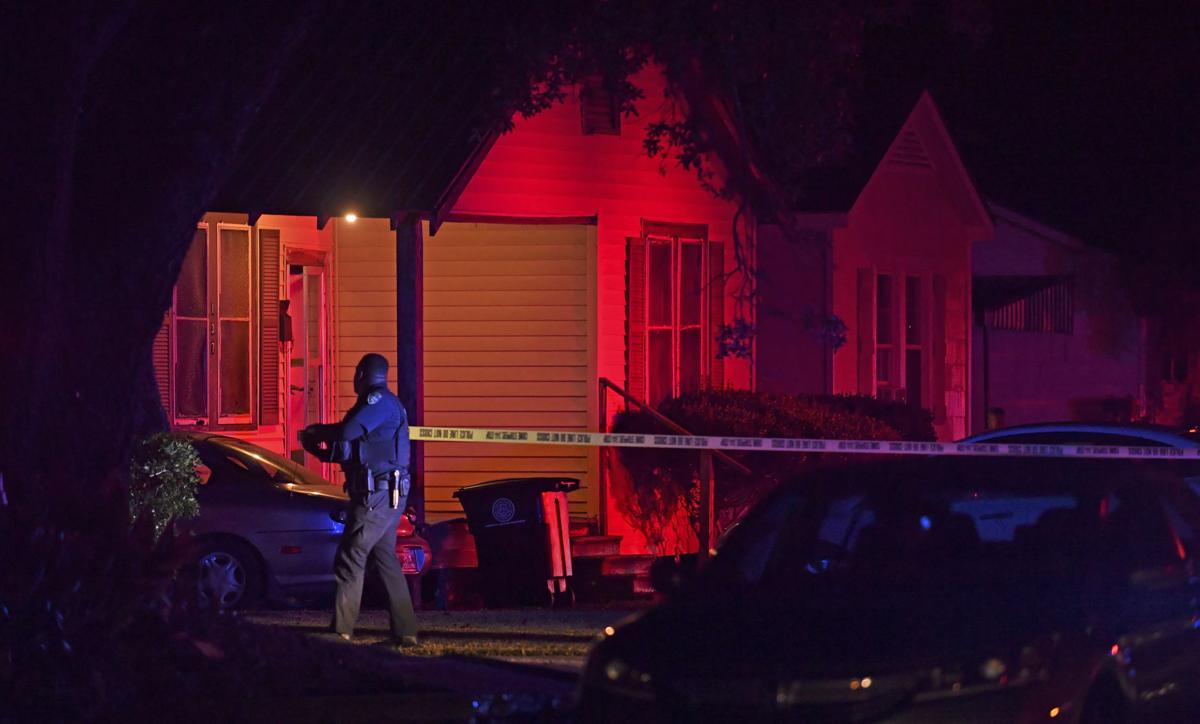 The coroner's office arrives on scene as Baton Rouge Police investigate the scene of a double homicide, Friday, November 20, 2020, on Sherwood Forest Boulevard near the Wise Communications business in Baton Rouge, La.

After unprecedented violence over the past several months, homicides in East Baton Rouge Parish have tied the previous record set in 2017 as 2020 promises to become the parish's most murderous year in recorded history.

Two fatal shootings on Wednesday preceded the news Friday afternoon that another man, who was shot Tuesday night on Scotland Avenue, had died in the hospital. Those killings pushed the parishwide murder count to a historic high — 106 lives lost to violence so far this year, according to unofficial records maintained by The Advocate.

That ties the 2017 total. The final count for 2020 will almost certainly be significantly higher, with almost a month left before this year of unforeseen devastation finally comes to a close.

Baton Rouge is not alone in facing notable increases in violent crime; other cities across the country are experiencing similar trends.

Some experts believe the coronavirus pandemic has contributed to the trends because people are under massive amounts of stress, often desperate for money and frustrated at the complete upheaval of normal life. Others point to the recent nationwide protests against police brutality, which may have weakened relationships between officers and their communities, and changes in the criminal justice system as law enforcement agencies struggle to be proactive and solve crime while adhering to social distancing requirements.

In addition to a huge jump in domestic violence killings across East Baton Rouge, there is one common thread that officials have highlighted: People are killing each other more often over minor disagreements that would not ordinarily escalate into shots fired and bodies left behind.

Five people have been shot to death since last week, a rate of killing that dwarfs previous years but tragically has become commonplace in 2020.

Baton Rouge police confirmed the latest homicide Friday afternoon. Officials said Van Vaughn, 50, died in the hospital after being shot Tuesday night. Police arrested his suspected killer not long after the shooting, which occurred in the 10000 block of Scotland Avenue. Kevin Tasker Jr., 34, is accused of shooting Vaughn during an argument, and his attempted murder charges will be upgraded since Vaughn has died, police said.

Tasker admitted to shooting Vaughn in the head while the two were fighting, saying he believed his opponent was reaching for a gun, according to his arrest report. But detectives noted in the report that Vaughn was unarmed and on the ground when Tasker pulled the trigger. The report does not contain details about what caused the fight, which perhaps represents another example of a minor disagreement escalating into senseless violence.

The parishwide murder rate had been trending downward in 2018 and 2019, with 86 and 83 homicides respectively. Officials spoke optimistically about continuing along that path — until a pandemic of gun violence arrived on the heels of coronavirus earlier this year.

The Advocate tracks intentional and unjustified killings per FBI crime reporting standards. These numbers are preliminary and could change in the future if ongoing law enforcement investigations result in certain cases being deemed justified or unintentional or vice versa.

Baton Rouge Police Chief Murphy Paul stood beside other local leaders and activists and delivered a familiar refrain, asking members of the public to help BRPD officers in their efforts to thwart violence before it occurs: "We do a pretty good job of putting the bad actors in jail … but we need to start preventing crimes."

'This has got to stop': Baton Rouge police chief pleads for peace amid surging homicide rate

As the city's homicide rate continues to climb, approaching a historic high amid the coronavirus pandemic, Baton Rouge leaders once again plea…

Paul said "changing a violent culture is hard" and has become even more difficult. The arrival of the coronavirus pandemic was followed by nationwide protests against police brutality — one of several factors that experts believe have hindered efforts at proactive policing in cities across the country.

Mayor-President Sharon Weston Broome, whose bid for reelection will culminate in a Saturday runoff election with Republican Steve Carter, also spoke at the press conference, touting a new anti-violence program made possible with $2.5 million in federal CARES Act funding. Among other things, the plans include hiring "violence interrupters" — often former gang members and drug dealers who have grown up and left the streets — to mentor youth and prevent senseless killings.

Some of Broome's critics, including Carter, have blasted her for failing to get Baton Rouge's homicide rate under control, especially after she campaigned on a promise of police reform back in 2016 and appointed Paul to head the police department the following year.

In the final mayoral debate before a Saturday runoff election, Carter accused Broome of taking a "hands off" approach to crime and policing during her first term — a new brand of criticism for Broome, who has previously been accused of butting into police department issues when she should be taking a back seat. She firmly denied Carter's claims, offering a reminder that the current spike in violence is not unique to Baton Rouge and its police department.

Experts will continue studying the current trend in hopes of explaining the 2020 violence. The next few weeks will determine exactly how grim those annual statistics will be.

Enter Baton Rouge 'at your own risk' due to high homicide rate, BRPD union billboards say

The Baton Rouge Union of Police has put up two new billboards bemoaning the city's crime rate, but provided little context to indicate what un…