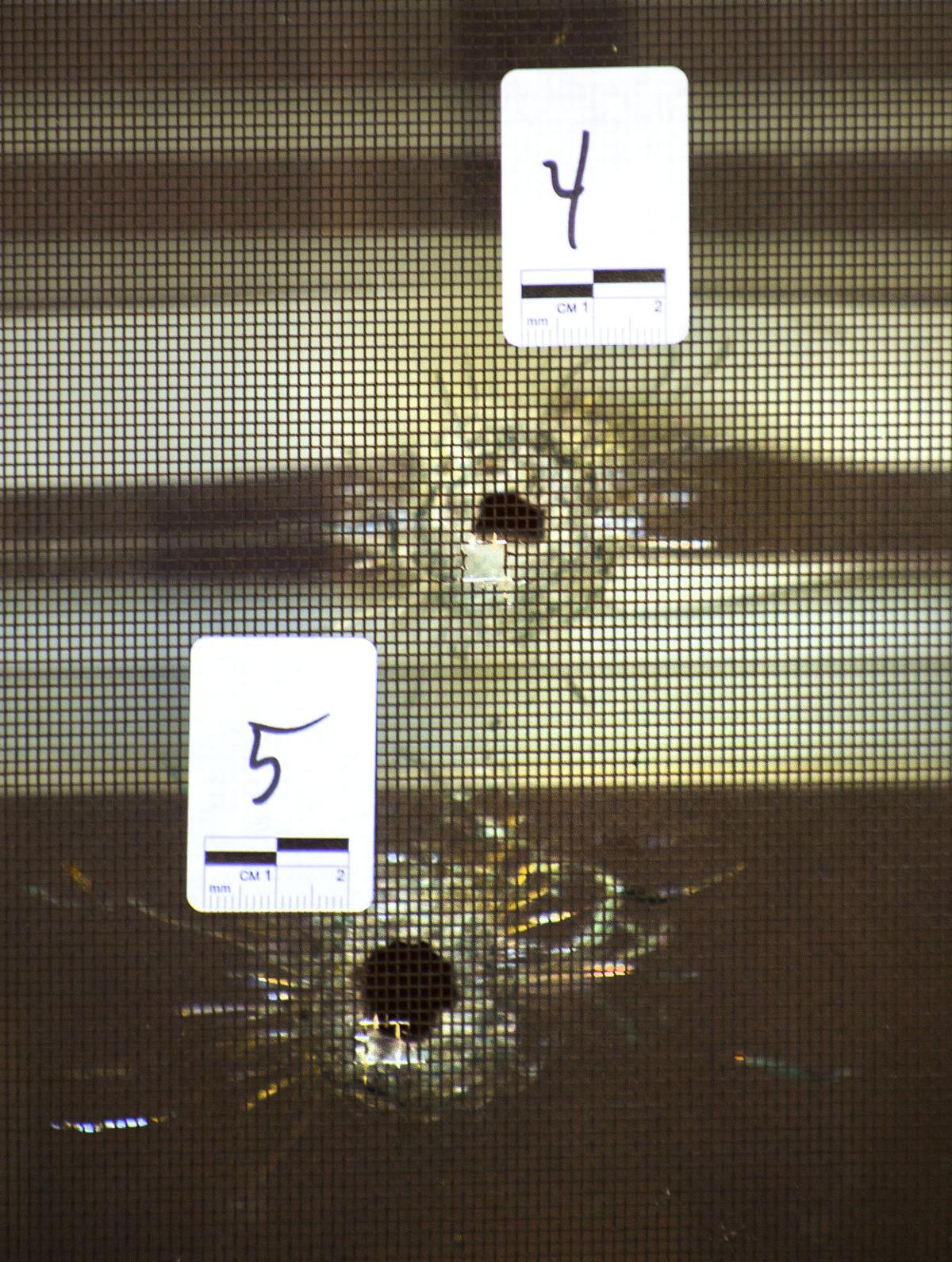 White evidence tags mark two of seven gunshot holes in the window glass of an apartment in a small Tigerland complex in the 1100 block of Jim Taylor Drive, seen Wednesday, Nov. 6, 2019. A man was killed in a shooting, reported around 2 a.m. Wednesday morning, according to Baton Rouge Police Dept. spokesperson Sgt. Don Coppola Jr.. 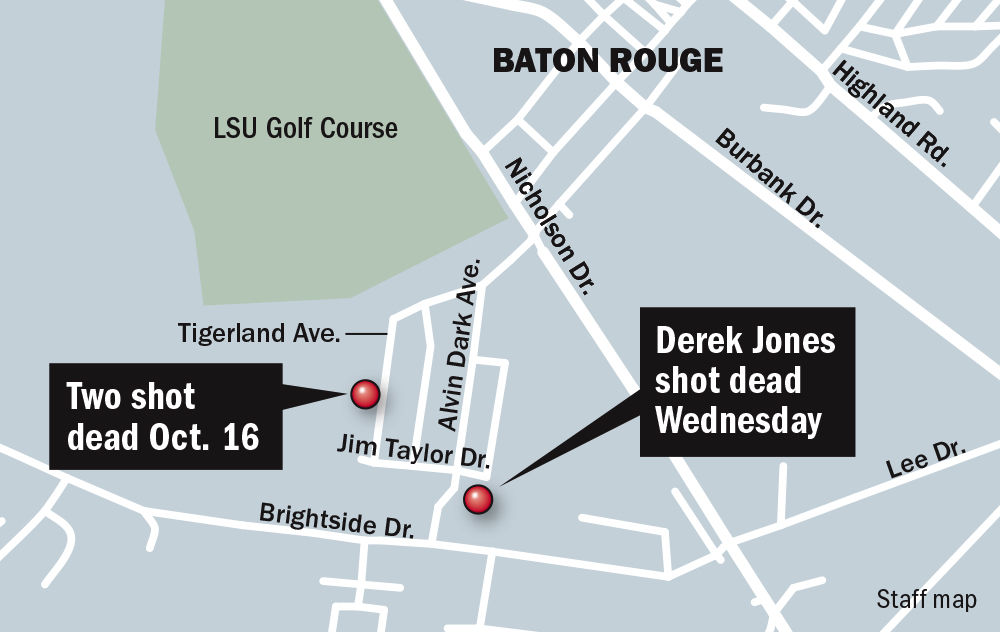 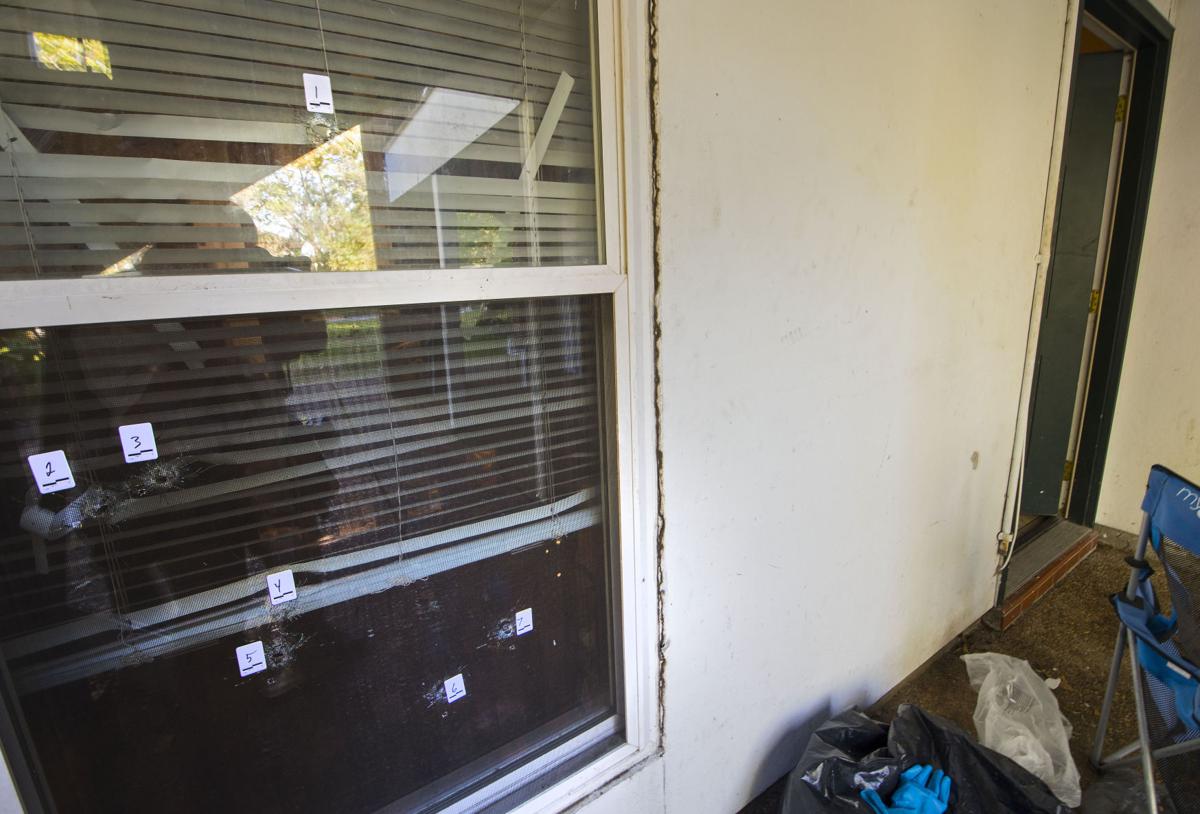 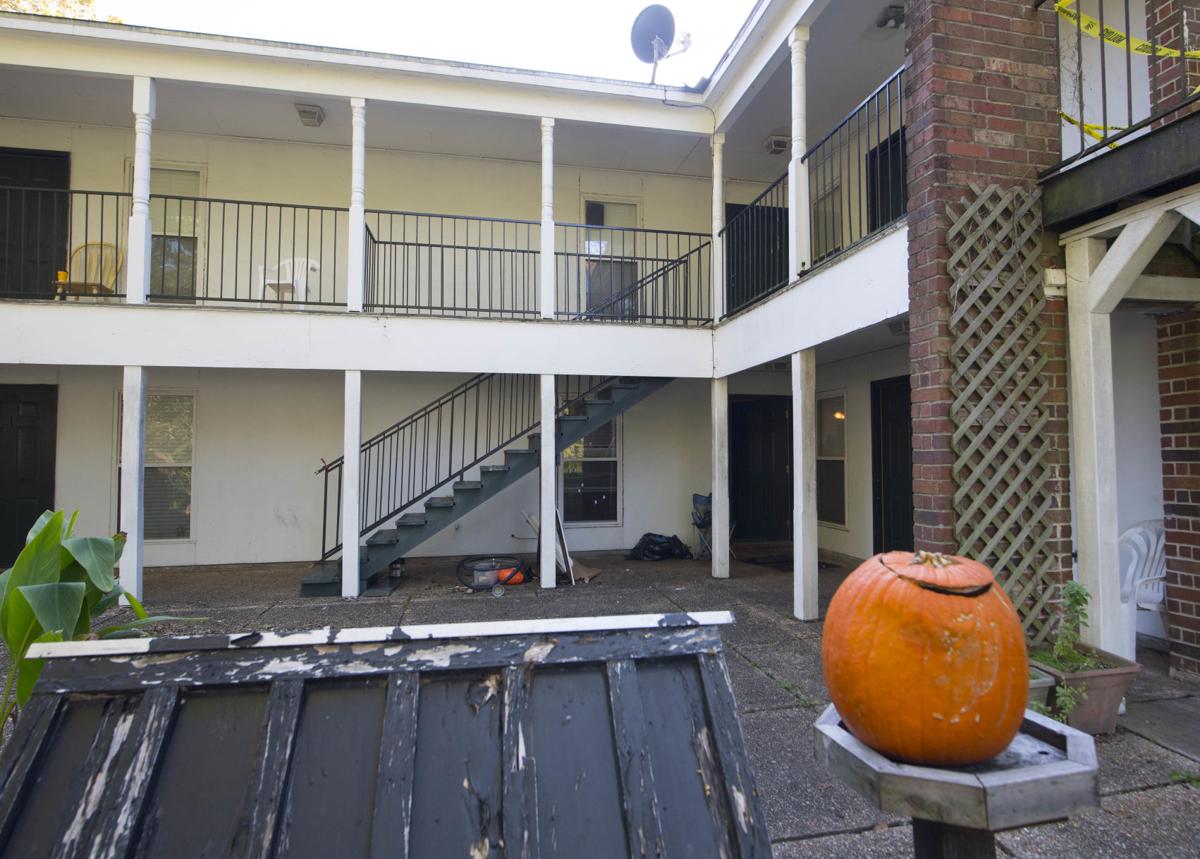 White evidence tags mark two of seven gunshot holes in the window glass of an apartment in a small Tigerland complex in the 1100 block of Jim Taylor Drive, seen Wednesday, Nov. 6, 2019. A man was killed in a shooting, reported around 2 a.m. Wednesday morning, according to Baton Rouge Police Dept. spokesperson Sgt. Don Coppola Jr..

A man was shot to death at a Tigerland apartment complex in Baton Rouge early Wednesday — the third person to be killed in that area within the past three weeks.

Tigerland is filled with dozens of apartment complexes just south of the LSU campus and a short distance from a cluster of popular bars off Nicholson Drive. A double shooting last month left two dead in what police have called a planned drug deal and armed robbery. Police said they hadn't determined a motive for Wednesday's shooting nor identified a suspect.

The victim was Derek Jones, 41, police spokesman Sgt. Don Coppola Jr. said. The shooting was reported around 2 a.m. in the 1100 block of Jim Taylor Drive between Nicholson and Brightside Drive.

Jones was killed inside the living room of a downstairs apartment in a small complex at the corner of Jim Taylor and Alvin Dark Avenue. Seven bullet holes were visible in the front window later Wednesday morning, with evidence markers placed next to them. A sign on the door warned people not to enter the apartment without authorization from the complex manager.

Jones didn't live in the apartment but was close friends with the man who does, according to neighbors and police. Detectives on Wednesday morning questioned the man who lives there, according to a relative who had stopped by the apartment to pick up some of the man's belongings. It wasn't clear whether he was considered a person of interest or a witness.

The relative said some bullets had pierced the couch, and a pool of blood was visible behind it, marking the spot where Jones spent his last moments of life. Jones was pronounced dead on the scene.

The building manager said he's received complaints about possible illegal activity at the complex, tips that were passed along to police. Baton Rouge police also said they've received similar complaints in the area.

A man who used to live in the apartment stopped by the scene Wednesday afternoon and said he had moved out last year because he was tired of hearing gunshots when he would walk his dogs early in the mornings. He said he still lives in Tigerland but is considering relocating to the St. George area because he's worried about crime.

LSU parents and others have long expressed concern about the area having become more dangerous in recent decades, especially as students have gravitated toward newer apartment buildings outside Tigerland, leaving vacancies in the aging complexes they once filled.

The other recent Tigerland homicide occurred Oct. 16 when two people were found dead from gunshot wounds inside another downstairs apartment around the corner on Tigerland Avenue.

Wife of Tigerland shooting victim: 'Nobody does anything to deserve that. These are human lives'

Three people — two of them teenagers — have been arrested in that case, and police said the shooting occurred during an armed robbery and drug deal. The two victims in that case were neighbors in the same complex.

Court records indicate Jones lived for at least some time in an adjacent building on Tigerland Avenue, but it's not clear if that's where he was living most recently. A police statement Wednesday listed him as living at the same complex as where he died, but did not list apartment numbers. Attempts to reach his family Wednesday were unsuccessful.

Police have not said whether investigators believe his death was related to the Oct. 16 double homicide.

One suspect has been arrested in a shooting in Tigerland last week that left a man and woman dead inside an apartment, and police say they exp…

Another recent incident involving law enforcement in Tigerland occurred this week when deputies with the Jefferson Parish Sheriff's Office tracked a stolen car to an apartment complex on Alvin Dark Avenue.

Two men were arrested as suspects in the fatal shooting of the car's owner in Metairie before driving back to Baton Rouge. The men had arranged to purchase the car, then killed its owner during a test drive, authorities have said. One of the suspects was also booked into jail on a separate warrant accusing him of stealing marijuana vape products from a smoke shop next door to the Pluckers where he worked on Nicholson Drive, which is also just a short distance from the entrance to Tigerland.

One of the deputies fired his gun during the arrest on Alvin Dark Avenue, but no one was injured. The Baton Rouge Police Department is investigating the shooting.

A man wanted in connection with a homicide in Metairie was arrested in Baton Rouge near Tigerland on Monday, after a Jefferson Parish Sheriff'…

Two more suspects have been arrested in a shooting in Tigerland that left a man and woman dead inside an apartment, Baton Rouge Police spokesm…