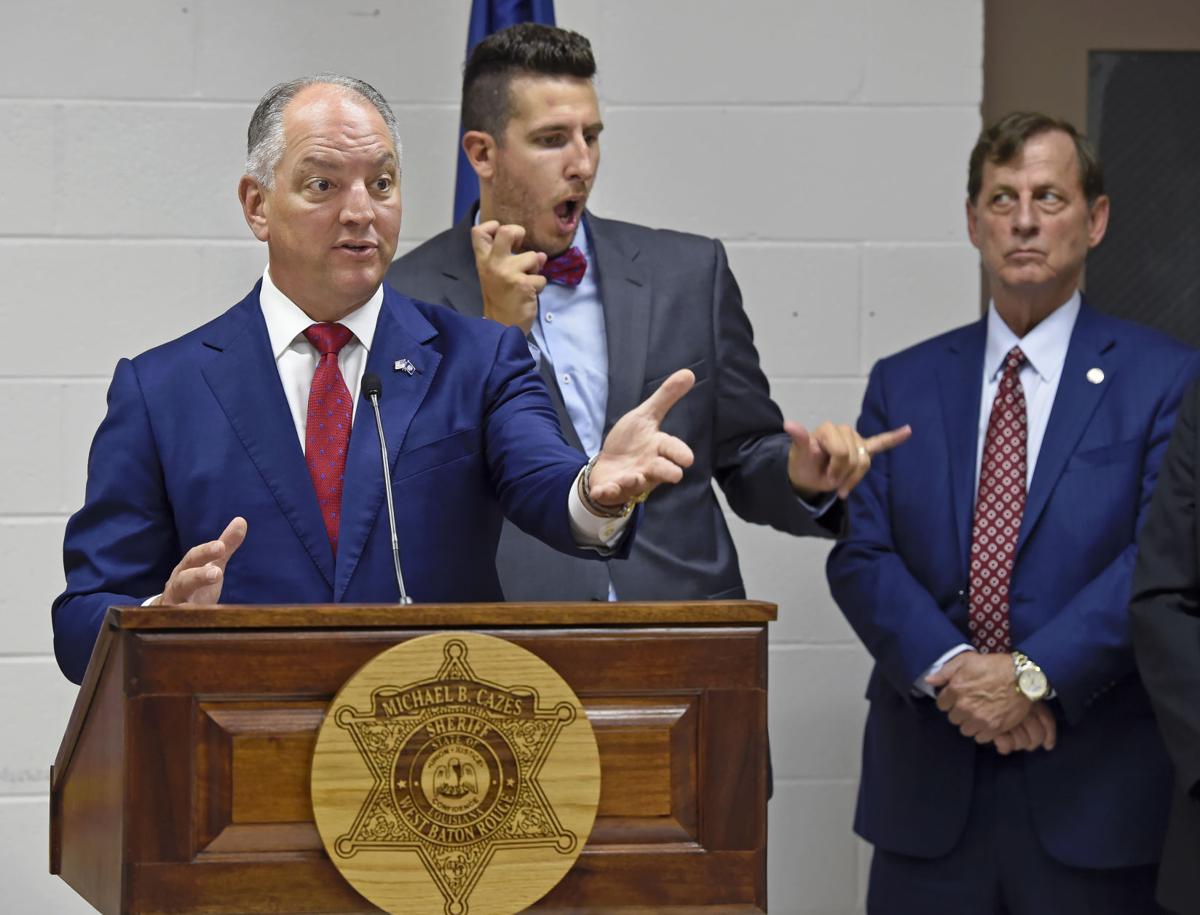 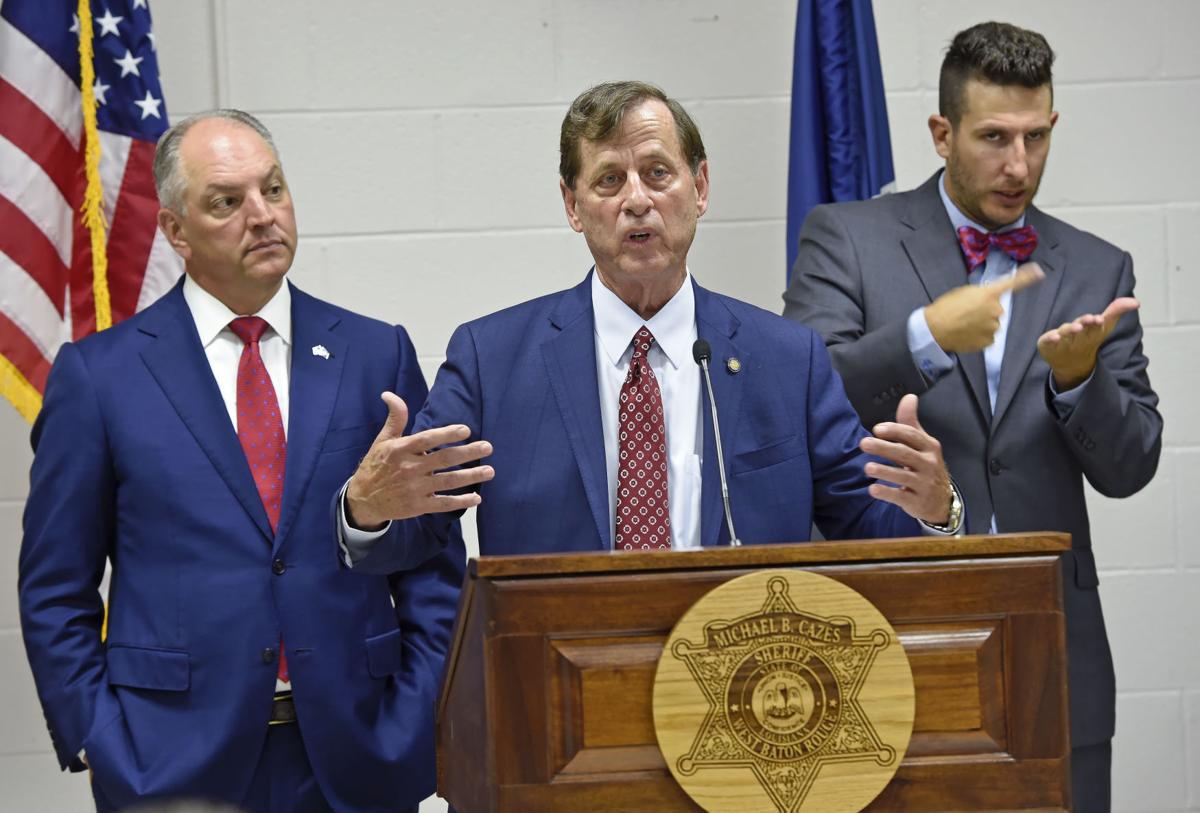 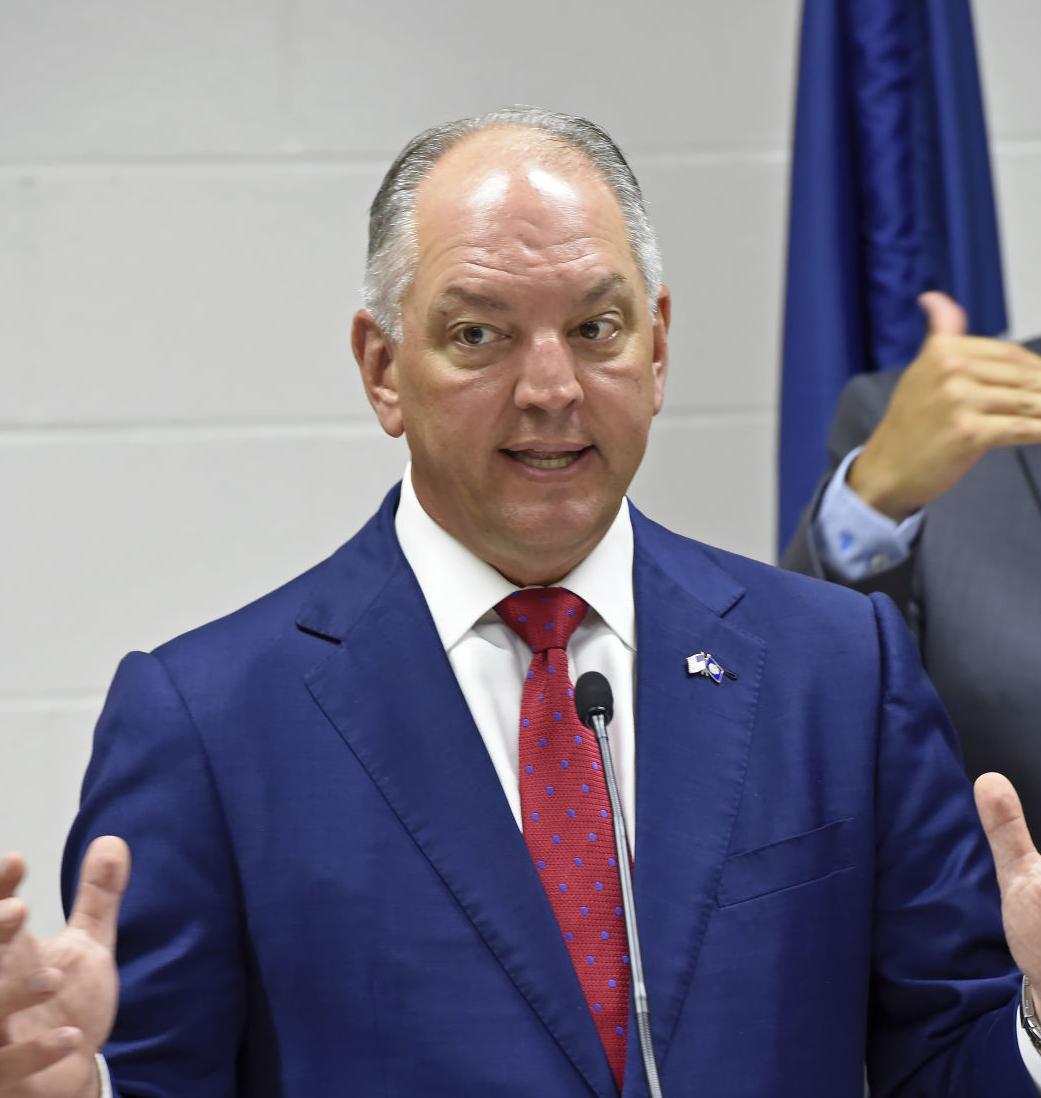 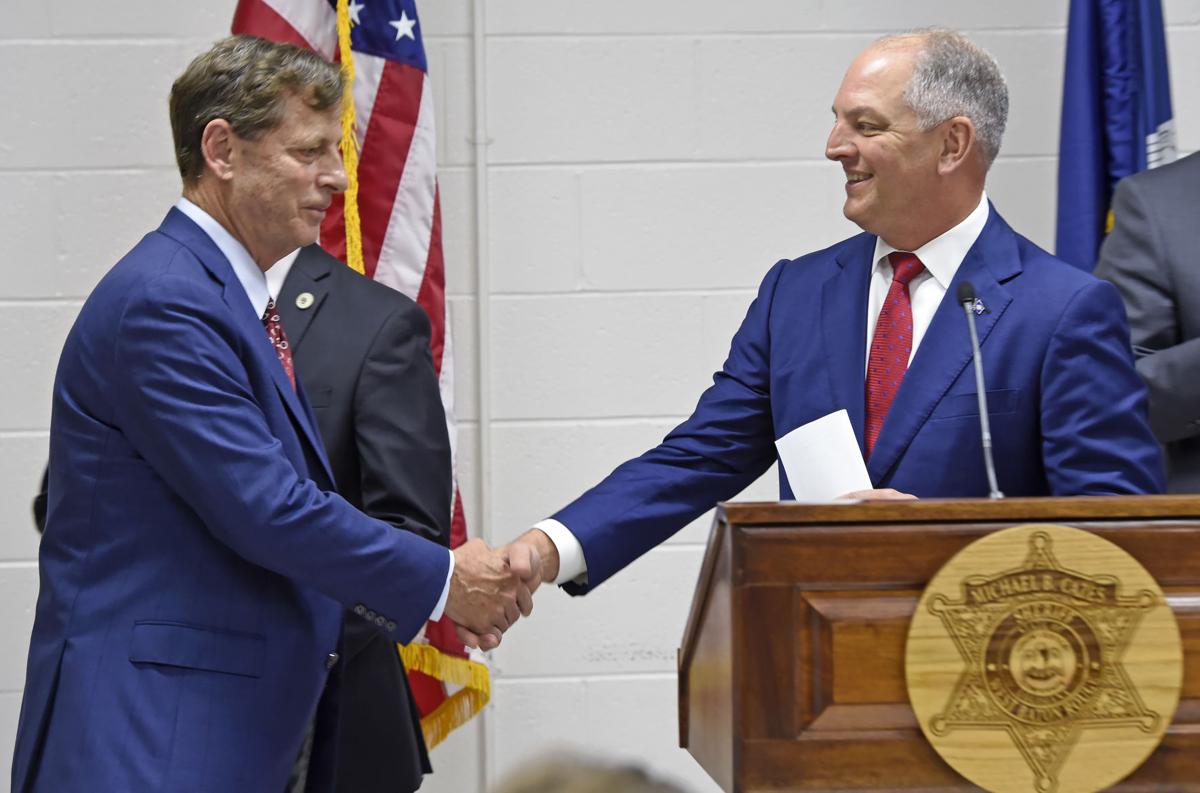 At the West Baton Rouge Parish Detention Center, Jimmy LeBlanc, Secretary of the Louisiana Department of Corrections, left, is introduced by Gov. John Bel Edwards, right, for remarks during the unveiling of the first performance report of the reform efforts as a result of the bipartisan Justice Reinvestment Initiative signed into law last year Thursday June 28, 2018, in Port Allen, La.

At the West Baton Rouge Parish Detention Center, Jimmy LeBlanc, Secretary of the Louisiana Department of Corrections, left, is introduced by Gov. John Bel Edwards, right, for remarks during the unveiling of the first performance report of the reform efforts as a result of the bipartisan Justice Reinvestment Initiative signed into law last year Thursday June 28, 2018, in Port Allen, La.

The state has seen a 20 percent decrease in the number of people imprisoned for nonviolent crimes and a 42 percent decrease in those sent to prison for drug possession, which has shifted the majority of state prison beds to violent offenders, according to Louisiana’s Justice Reinvestment Reforms First Annual Performance Report released Thursday. The number of people under community supervision by probation and parole officers has also dropped about 9 percent overall, corrections officials said.

"This is an exciting day for our state," Edwards said Thursday at a news conference. "We're announcing, really, the beginning of the progress we're going to make because of the decision we made over a year ago."

Previously the incarceration capital of the nation, Louisiana dropped this month from holding the first place spot to second place behind Oklahoma, for the highest rate of prisoners per capita per 100,000. Edwards credited the 10-bill bipartisan package aimed at reducing the prison population and addressing pressing criminal justice issues with that success.

"Shedding that title is just the beginning," Edwards said. "This is about making the people of Louisiana safer."

While the report does not announce the official savings incurred from the changes to Louisiana's criminal justice system, Department of Corrections Secretary James LeBlanc reported last week about $14 million in total savings since the reforms went into effect — a huge jump from the predicted $6 million when the bills were up for consideration by the Legislature last spring. Edwards said the savings will be reported in early July after the fiscal year is completed.

However, Department of Corrections Undersecretary Thomas Bickham explained last week at a public meeting that it's still unclear if the entire $14 million will be available for reinvestment as mandated by the reforms.

Bickham said there remains a gap of about $6 million between actual cash savings and supplemental savings, the latter of which includes money that the department historically has had to request late in the fiscal year. Because of the decrease in prisoner population this past spring, the department did not request supplemental funds, though Bickham said those savings should still be included in reinvestment calculations.

Whether the $8 million available in cash savings or the full $14 million, 70 percent of those savings are dedicated by the reforms to public safety measures, primarily focused on reducing recidivism and supporting offenders before leaving prison and throughout their reentry to society, but also to support victims of crime.

As mandated by the legislation, the savings will be divided three ways: 30 percent awarded in grants for community reentry services and prison alternatives; 20 percent to support victims' services; and 50 percent will remain within the Department of Corrections to offer programming for inmates.

In the second year, the Office of Juvenile Justice will start to receive 20 percent of the reinvestment money. The 2017 reforms were predicted, upon their passage, to generate $262 million in savings over 10 years.

Both LeBlanc and Edwards pledged their support, once again, to the reinvestment efforts, calling them key to the success of the reforms long term.

LeBlanc said that as of Thursday, the state prison population has dipped below 33,000 — the lowest number in 20 years and about 3,000 less than before the implementation of the reforms, he said. He also said that since November, the number of offenders under community supervision, meaning probation or parole, has dropped about 6,000, now just above 66,000. He said the probation and parole drop is a result of improved incentives for good behavior and allows better monitoring by officers as caseloads shrink.

The report also notes that of the non-violent, non-sex offenders under supervision, the number who have had their parole or probation revoked — sent to prison for a violation, whether criminal or not — dropped by almost 8 percent in the fourth quarter of 2017 compared to an average from 2016.

"We are beginning to see the fruits of our labor," LeBlanc said. "It isn't easy, but it's sure worth it."