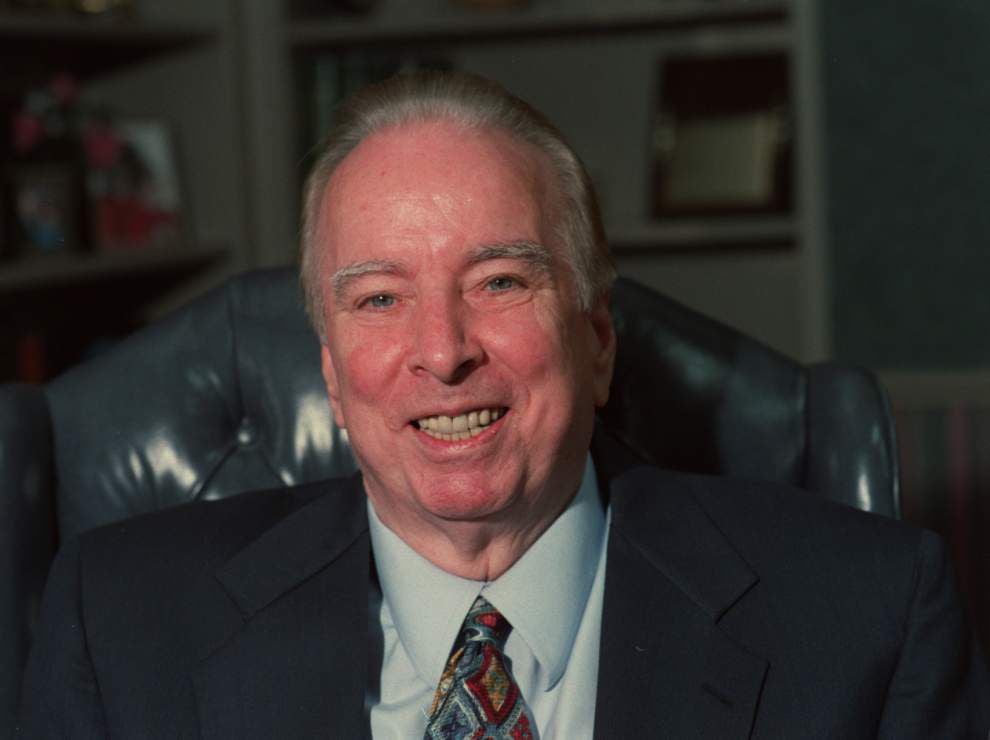 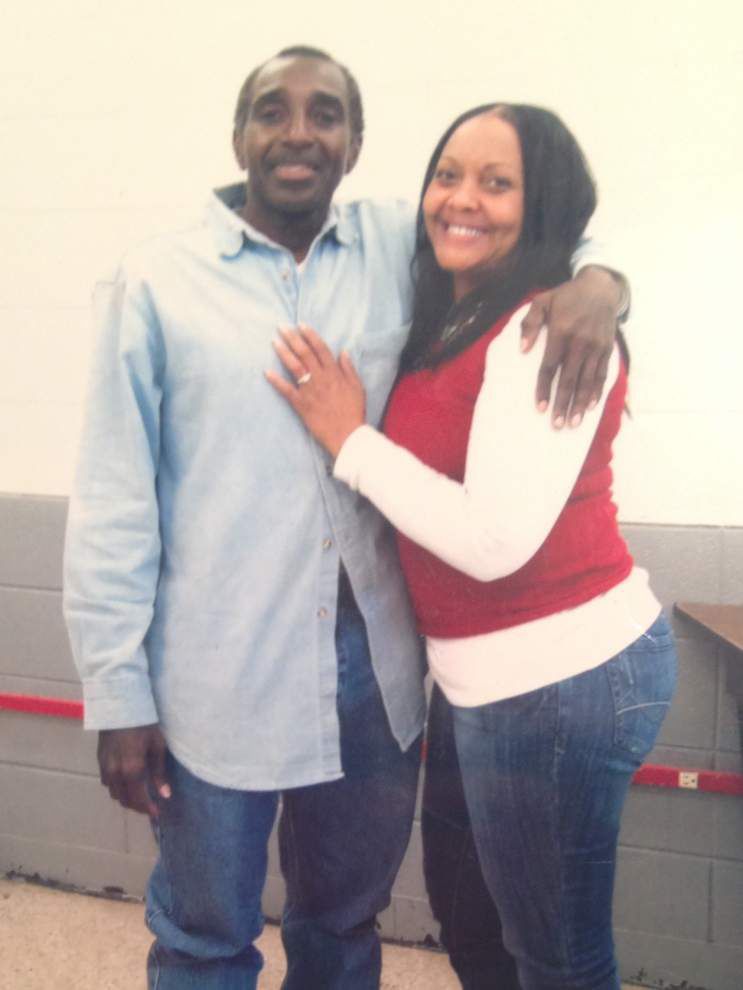 Photo provided by Sheila Whitmore A friend visits Kenny Whitmore, who has spent nearly three decades in solitary confinement or, as prison officials call it, "closed cell restriction," in Angola. 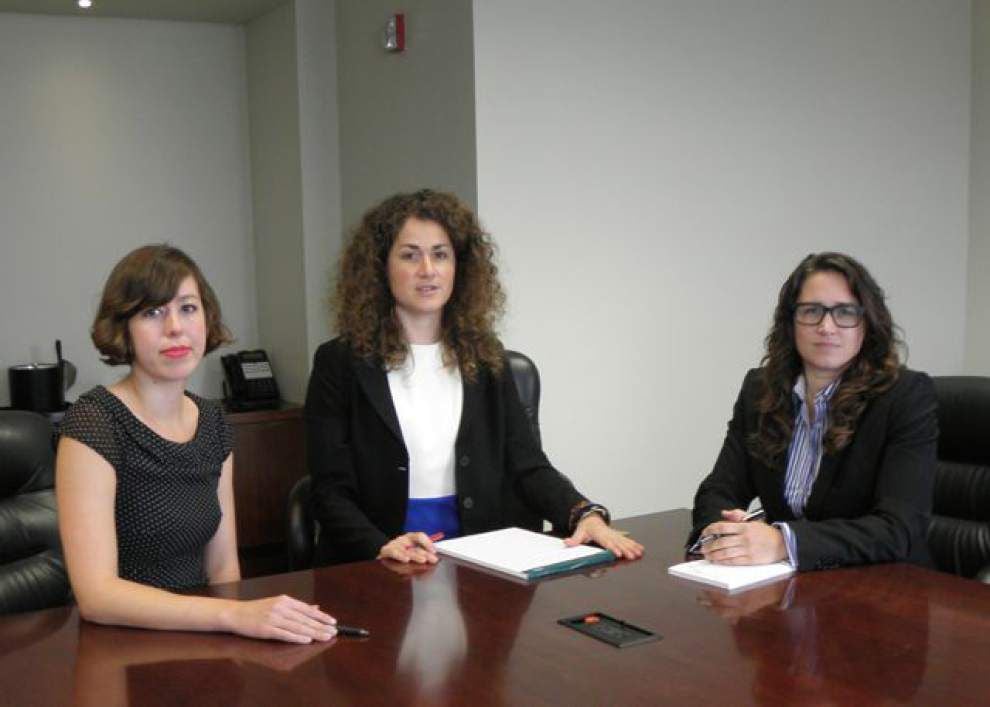 Photo by Annie Ourso Kenny Whitmore's lawyers, Rose Murray (Left) and Michelle Rutherford (right), filed a federal civil rights lawsuit to have Kenny Whitmore released from closed cell restriction at Angola and returned to the general population. His other lawyer, Emily Posner (Middle) and Rutherford are working to a separate case to grant Whitmore a retrial for his murder conviction.

Photo provided by Sheila Whitmore A friend visits Kenny Whitmore, who has spent nearly three decades in solitary confinement or, as prison officials call it, "closed cell restriction," in Angola.

Photo by Annie Ourso Kenny Whitmore's lawyers, Rose Murray (Left) and Michelle Rutherford (right), filed a federal civil rights lawsuit to have Kenny Whitmore released from closed cell restriction at Angola and returned to the general population. His other lawyer, Emily Posner (Middle) and Rutherford are working to a separate case to grant Whitmore a retrial for his murder conviction.

Kenny “Zulu” Whitmore — sentenced to life in prison 38 years ago in the murder of former Zachary Mayor Marshall Bond — is asking for a new trial, citing in part the circumstances of the confession he made under questioning by then-District Attorney Ossie Brown.

Included as new evidence in Whitmore’s request are documents turned up by the LSU Manship School Civil Rights-era Cold Case Project team two years ago in which the FBI claimed Brown had connections with the Ku Klux Klan and spoke to a gathering of the hate group during the 1970s. The defense claims Brown’s handling of the case was tinged with racial bias, another reason a new trial is warranted for Whitmore, who is black.

“Mr. Whitmore is an innocent man, wrongfully incarcerated for the last 40 years by the state of Louisiana for a crime he did not commit,” said Emily Posner, one of his attorneys. “His conviction was the result of a prejudiced investigation, prosecutorial misconduct and withheld exculpatory evidence.”

Commissioner Quintillis Lawrence, of the 19th Judicial District in Baton Rouge, is reviewing Whitmore’s petition to determine whether the state must respond to the merits of the claims. The East Baton Rouge Parish District Attorney’s Office has filed procedural objections, noting multiple post-conviction relief petitions have already been filed in the case.

“We believe it is repetitive and barred by time,” said District Attorney Hillar Moore.

Bond’s stepdaughter Mary Baker, who was 31 at the time of the homicide, declined comment for this story.

Whitmore testified at his trial in 1977 that on Aug. 15, 1973, he rode as a passenger to Bond’s farm with Mister Donahue, who also was convicted in the killing. Donahue’s second-degree murder conviction was overturned because of a procedural flaw in the way he was charged, but he remains incarcerated for the armed robbery portion of the Bond crime.

Whitmore, 18 at the time of the killing, testified he stayed in the car while Donahue got out to supposedly ask Bond for a job. Whitmore claimed that when Donahue returned, he said he’d beaten and robbed the man instead. Bond, who had also been stabbed, died at the hospital a few hours later.

Eighteen months after Bond’s death, Whitmore was arrested on an unrelated armed robbery charge. Whitmore claims that while in jail, he was paid a late-night visit by Brown, who was East Baton Rouge Parish’s district attorney and a close friend of Bond’s. Whitmore contends Brown coerced him into admitting to a role in the murder. Whitmore subsequently gave two taped statements to an officer. In the first, Whitmore said he stayed in the car while Donahue beat and robbed Bond. In the second, taken a day later, Whitmore says he got out of the car and helped Donahue beat and rob Bond.

Whitmore claims he was interrogated for almost two days with threats, physical abuse and little food or sleep. He said he told Brown and the officer what they wanted to hear “just to make it all stop.”

“I was intimidated and threatened and told I would spend the rest of my life in Angola if I did not provide the information they asked for,” Whitmore said in a written response, through his attorneys, to questions by the LSU Wrongful Convictions Project team.

Whitmore declined to explain why he didn’t contact authorities if he knew Donahue had beaten and robbed Bond but hadn’t himself taken part in the crime.

Joseph Brantley, Whitmore’s defense lawyer in 1977, says today that while he feels the trial was fair, he doesn’t believe there was proof beyond reasonable doubt to convict his client.

Whitmore and his current lawyers argue his conviction rests exclusively on a false confession. His attorneys have recovered reports from the East Baton Rouge Parish Sheriff’s Office and the State Police crime lab listing evidence that was not used in the trial. The reports mention at least 10 fingerprints taken from the scene, prints from two types of shoes and a bloody soft drink bottle sent to the crime lab for analysis.

District Attorney’s Office Investigator Leonard Spears removed the evidence from the crime lab in 1976, according to police records included in Whitmore’s petition. The evidence was never checked back in. Only a few fingerprints, photographs and a list of physical evidence remain.

Had it known of that evidence, Whitmore’s defense could have used it to prove his confession was false because he contradicted what investigators actually found at the scene, his current attorneys argue. The main evidence presented by the prosecution was Whitmore’s taped statements.

Whitmore says that during the late-night jail visit, Brown tried to make a deal with him, claiming the district attorney told him that “anything I say you did, you did. My word is three times yours.” Whitmore contends he repeatedly requested an attorney, but Brown told him he didn’t need one.

It remains unclear what led Brown and officers, two years after the fact, to question the two men about the Bond murder.

Brown also testified at Donahue’s trial. Brown said Donahue gave him an incriminating statement the day after Whitmore confessed. But Brown said Donahue, who like Whitmore was in jail on an unrelated charge, refused to confess on tape.

In a January interview, Hebert said it was not unusual for Brown to be directly involved in such cases.

The defense contends Brown, who died in 2008, had a racially biased history that made for a prejudiced investigation and violated Whitmore’s constitutional rights of due process and equal protection before the law.

“He served as attorney for many Klan members and as attorney handling legal matters for the Klan,” Moore wrote. “Brown was reportedly robed speaker at the sixth district Anti Communist Christian Association (original Knights of the Ku Klux Klan) meeting on Feb. 23, 1968, attended by 45 robed KKK members wherein he, Brown, praised the KKK, stated they should not be afraid of the FBI, should not cooperate with the FBI and that they would have no trouble with FBI unless they committed acts of violence.”

“That’s a stretch,” Hebert said recently. “Ossie had support in the black community.”

Brown gained the notice of African Americans by successfully defending a black U.S. Army sergeant in the Vietnam War-era My Lai massacre cases in 1970, Hebert said.

Brown’s son, Dana Brown, a Baton Rouge attorney, dismissed the FBI report, which was based on confidential sources inside the Klan. Dana Brown said his father was “considered a friend of the black community” and “enjoyed considerable political support from that base.”

Brantley, Whitmore’s original defense attorney, agreed that Brown had a “great relationship” with the black community but said he may have had affiliations with the Klan as well, for political reasons.

“That wouldn’t surprise me back then — Ossie wanted votes,” Brantley said.

But Brantley added he’d be surprised if Brown could have been an active KKK member and still maintained a good relationship with the black community.

Brantley also said he trusts that Brown and other prosecutors believed Whitmore was involved in some way with the murder.

“I don’t remember any trepidation about, ‘My God, they convicted an innocent guy,’ ” Brantley said. “I would have really lost sleep over that.”

Also included in Whitmore’s petition are Sheriff’s Office reports of interviews conducted after the murder, documents that his attorneys say suggest someone else had a motive to kill Bond, who owned a pharmacy. People familiar with Bond’s last days told investigators he was upset over the fallout of a soured business deal with a man who had become his “bitter enemy,” one report says. The man was evasive when questioned by deputies. They asked him to submit to a lie detector, but “he never showed up for the test,” an investigator wrote.

Another witness said that on the day of the killing, he overheard Bond take a phone call at his pharmacy and say he would meet the person in five minutes and “you had better be there.”

None of that evidence was made known to Whitmore’s attorneys in 1977, according to an affidavit from Brantley.

But Rebecca Badon, a juror from Whitmore’s 1977 trial, says that while it’s possible all the available evidence wasn’t presented, she feels confident the guilty verdict was correct.

“If he did not have anything to do with it, he should not have been in the car,” Badon recently said. “He never said he was not there. When asked what he was doing in the car, he said he was looking at the cows.”