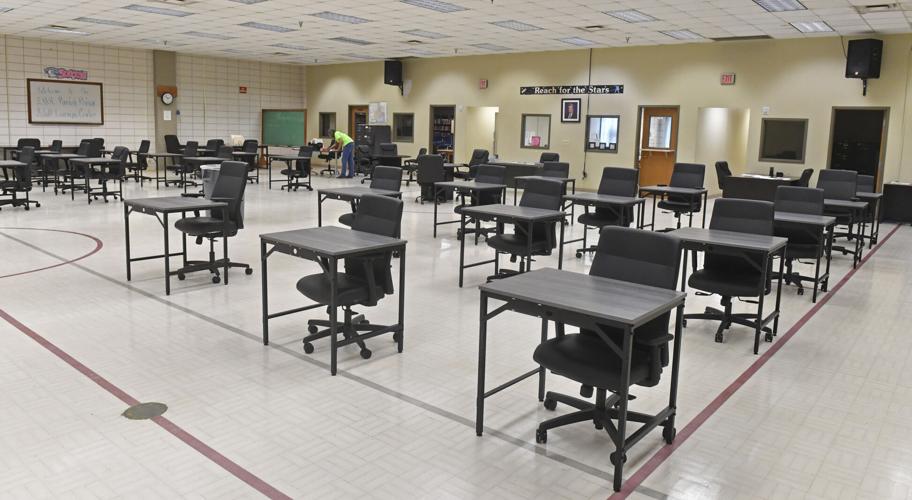 Lead teacher Tomicka Lee works in the far back as empty desks are seen in the classroom at the East Baton Rouge Parish Prison, Thursday, June 16, 2022, in Baton Rouge, La. 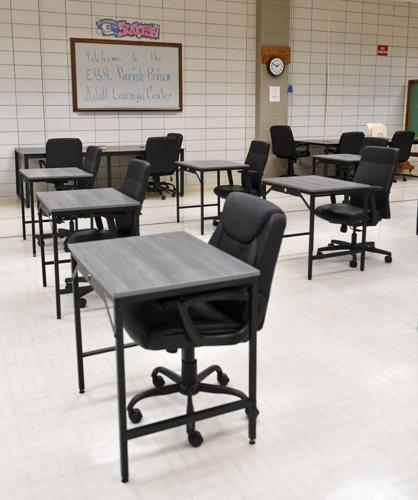 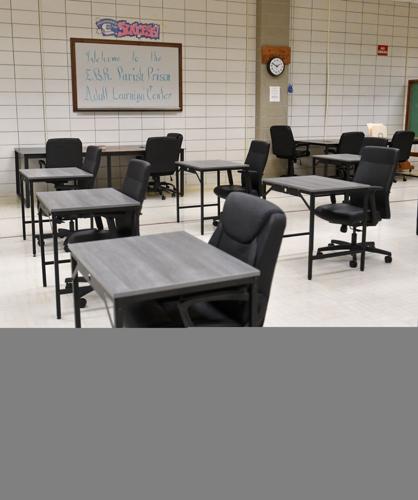 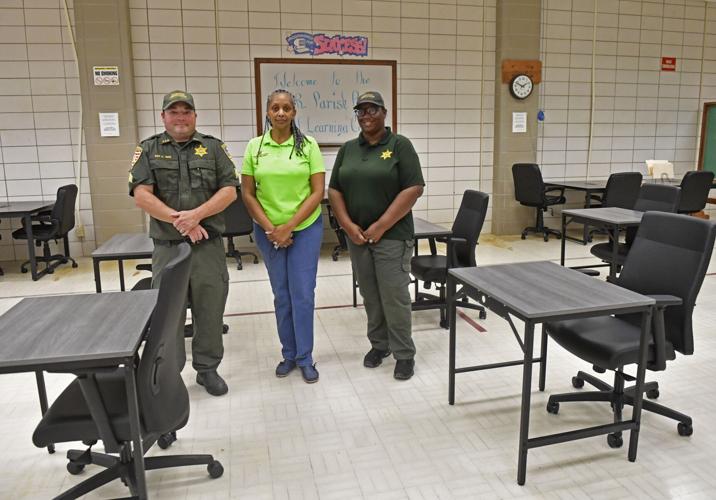 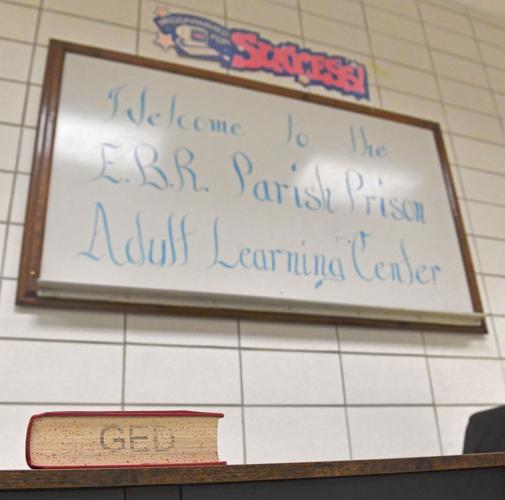 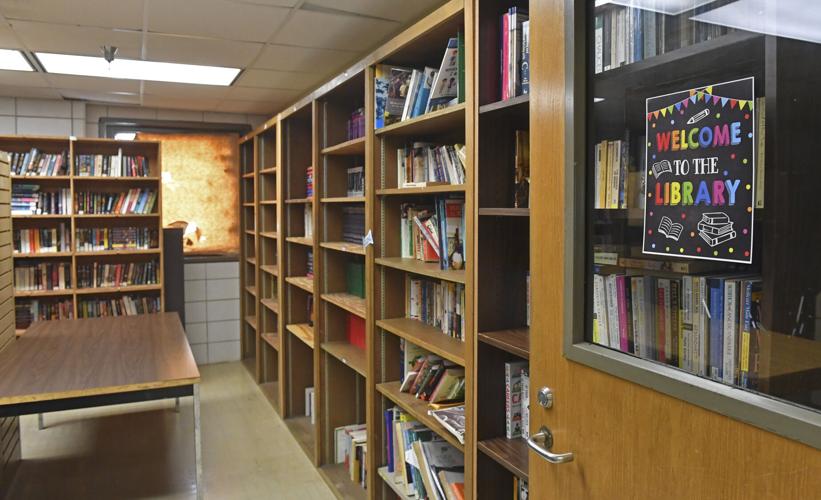 The library is seen adjacent to the classroom at the East Baton Rouge Parish Prison, Thursday, June 16, 2022, in Baton Rouge, La. 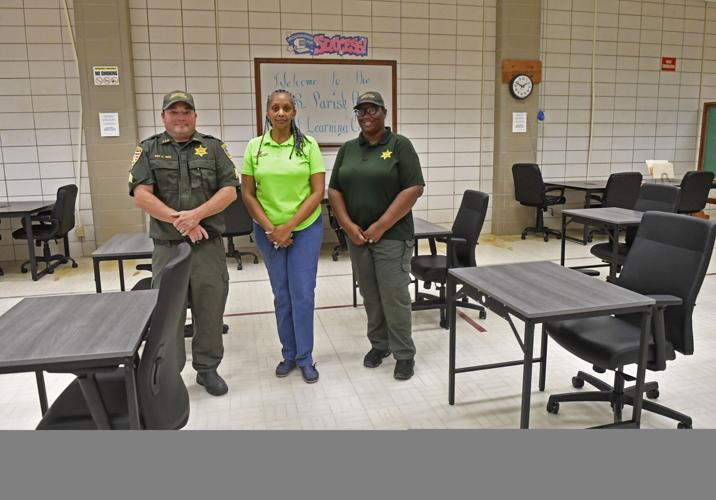 Lead teacher Tomicka Lee works in the far back as empty desks are seen in the classroom at the East Baton Rouge Parish Prison, Thursday, June 16, 2022, in Baton Rouge, La.

The library is seen adjacent to the classroom at the East Baton Rouge Parish Prison, Thursday, June 16, 2022, in Baton Rouge, La.

In the 14 years he’s served as warden of East Baton Rouge Parish Prison, Dennis Grimes has seen first hand the difference a diploma makes for the people who cycle through his facility’s doors.

Inmates' average education level hovers between 4th and 7th grade, sheriff's office data shows. So when they get out, they frequently end up with no real prospects for a good job.

That often means Grimes will soon see them back in his prison — over and over again, in some cases.

To break the cycle, the sheriff's office has long provided classes and tutors to help inmates get GEDs. Since its start in 1991, more than 10,000 people have received a diploma — something research shows makes them much less likely to reoffend.

Then COVID halted everything in its tracks.

When the pandemic struck in March 2020, the prison was forced to slash the maximum number of inmates in its classroom from 60 to 30. Demand for the program had increased, but it simply wasn't safe to put that many people in a confined space, Grimes said.

For Grimes, who expanded the GED program in 2008 alongside East Baton Rouge Sheriff Sid Gautreaux, it was a frustrating setback.

Without something to focus on, and without intellectual stimulation, the warden fears offenders will fall back into the same behavior that landed them in the criminal justice system in the first place.

“The more we keep them engaged in education, the better the outcomes become,” Grimes said.

Back in 2008, under Grimes, Gautreaux doubled the GED program's staff and installed more computers in the prison's classrooms so more incarcerated students could prepare for the GED or the HiSET, a similar diploma.

Grimes said students are able to choose courses designed to help them concentrate on improving their skills in one area, like reading, writing or math.

The goal, he explained, is to give people in parish custody options that set them up to succeed once they leave the facility.

“While we’ve got them here,” Grimes said, “why not expose them to as many resources as possible?”

Experts who study the correlation between inmate education programs and recidivism rates — which refer to the tendency of a convicted criminal to reoffend — overwhelmingly agree with that philosophy.

Dr. Retherford Reese has studied the subject for decades. He’s the founder of the Prison Education Project, which has become the largest program of its kind in the U.S.

Over the last decade, Reese said he’s seen a major nationwide shift in attitudes toward prison rehabilitation programs, which are now being reexamined as a way to stop people from repeatedly cycle through the criminal justice system.

A 2011 study by the Institute for Higher Education Policy found that roughly seven in 10 formerly incarcerated people will commit a new crime in their lifetime. More than half will end up back in prison within three years of their last release.

But an earlier report by the same group found that recidivism rates for those who participated in prison education programs were, on average, 46% lower than those who did not enroll in those programs.

Similarly, a 2013 study by the U.S. Department of Justice that examined data from thousands of in-prison programs nationwide found that inmates who participated in educational or vocational training were 43% less likely to return to prison once released. It also found that the upfront investment in these programs — which capped out at roughly $1,800 per inmate — was minimal compared to the cost of incarcerating a person multiple times.

Those numbers are staggering, Reese said.

An idea on the rebound

At the time, Pell Grants were the main source of funding for prison academic programs, and hundreds of federally-funded education and vocational programs in state prisons were forced to shutter, Reese said.

She explained that placing a newfound emphasis on education, rather than incarceration, ensures better outcomes for generations to come.

“Whenever we think about what we do with people in prisons and jails, we need to not only think about the immediate results, but also about how it will impact the next generation,” Nixon said. “One of the biggest predictors of how the next generation will turn out is whether their family has been involved in the justice system and whether their family has access to education.”

Most state prisons now offer GED courses. However, the option is less common at local facilities, which often receive less support for such programs because their inmates serve shorter sentences.

Even though jails may not be able to provide people serving shorter sentences with the same kind of in-depth programs available at long-term prisons, Nixon said these courses still lay important groundwork when it comes to re-engaging inmates in their own education.

After class, students are sent back to their dormitories with homework, where they have access to additional tutoring to help them with assignments.

Because people cycle through the prison so quickly, the parish does not track recidivism rates among its offenders.

Grimes, who previously spent several years as warden at the state-run Dixon Correctional Institute, said he views the GED program as a stepping stone for long-term inmates who will ultimately be transferred to state prisons.

“However long they’re here, they have an opportunity to be in a program and get some resources that can help them when they leave,” he said.

As Parish Prison grapples with yet another statewide spike in virus cases, however, Grimes is focused on bringing the program back up to where it was three years ago.

In the meantime, he said the facility is allowing students to complete their lessons individually, instead of in the classroom.

He hopes it will save some from falling through the cracks.

“We have to try to close this front door,” Grimes said. “And programming is the way to do that.”