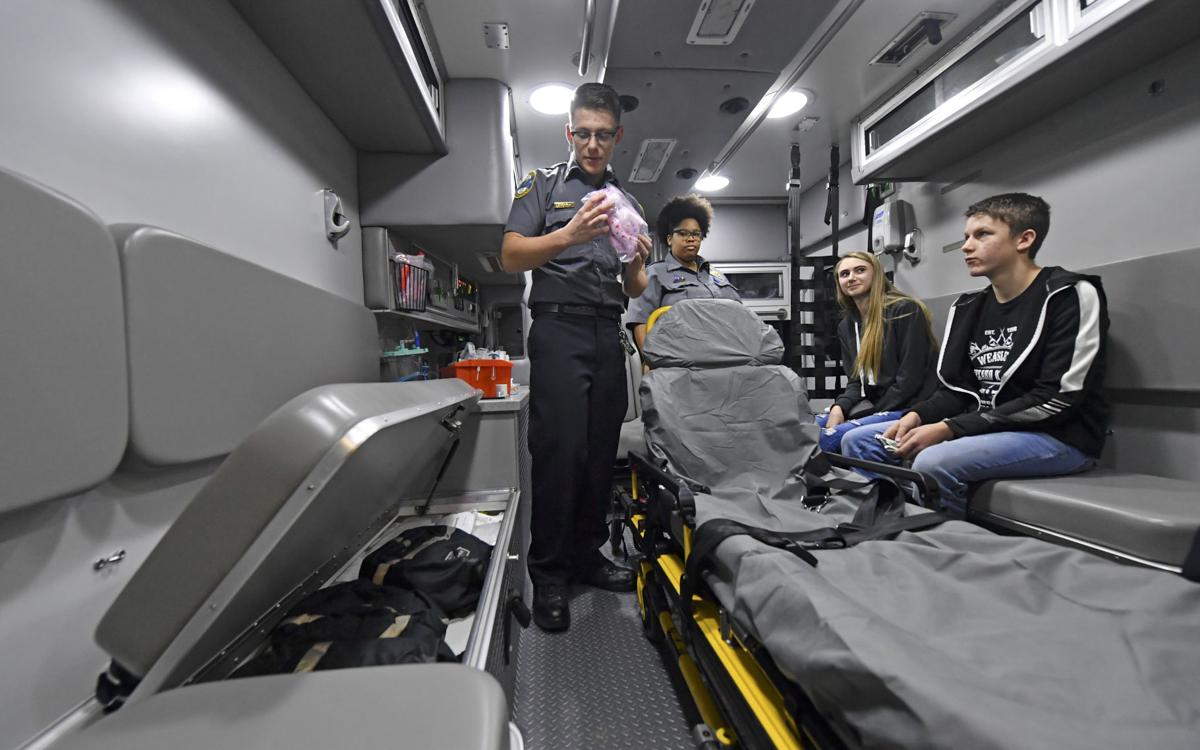 From left, EMS Explorer Gage Simoneaux shows one of several stuffed animals kept in the back of an ambulance for young children as he and Jayla Morgan show prospective explorers Reagen Sanchez and her brother, Chance Sanchez, the ins and outs of an EBR EMS ambulance during an event to showcase the EMS Explorers program, Thursday, January 9, 2020, at EMS headquarters in Baton Rouge, La. 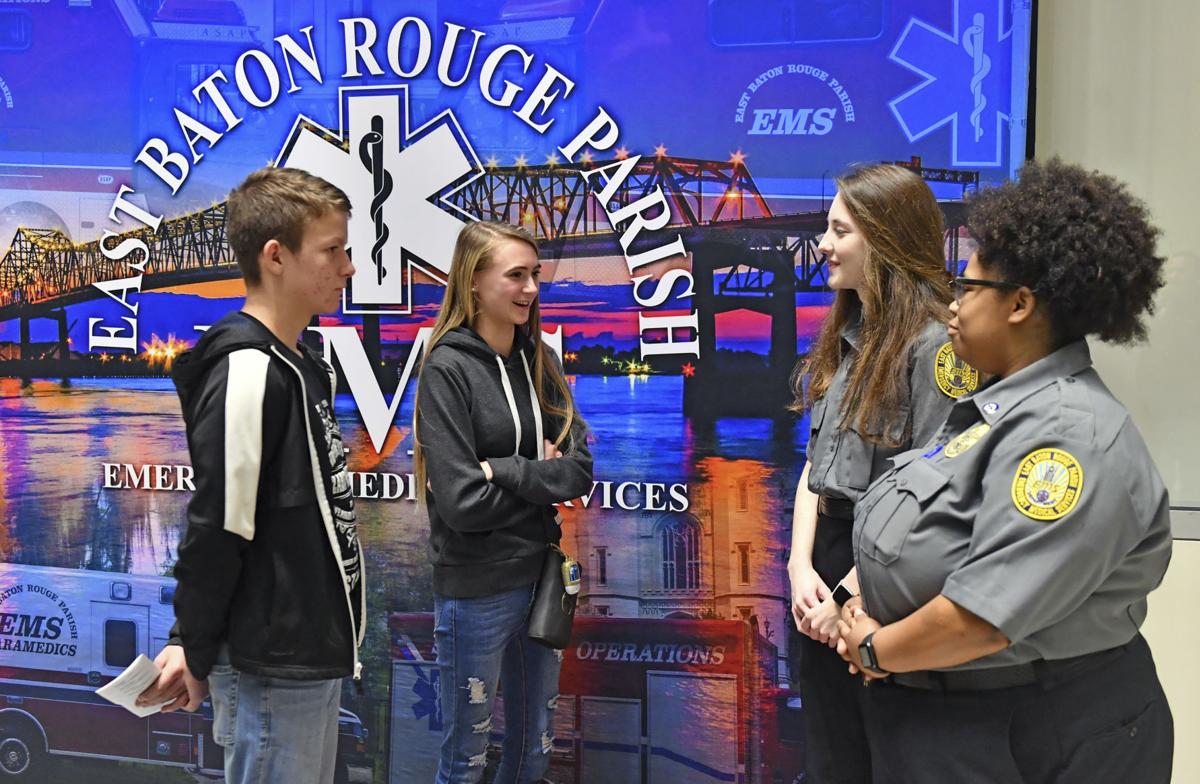 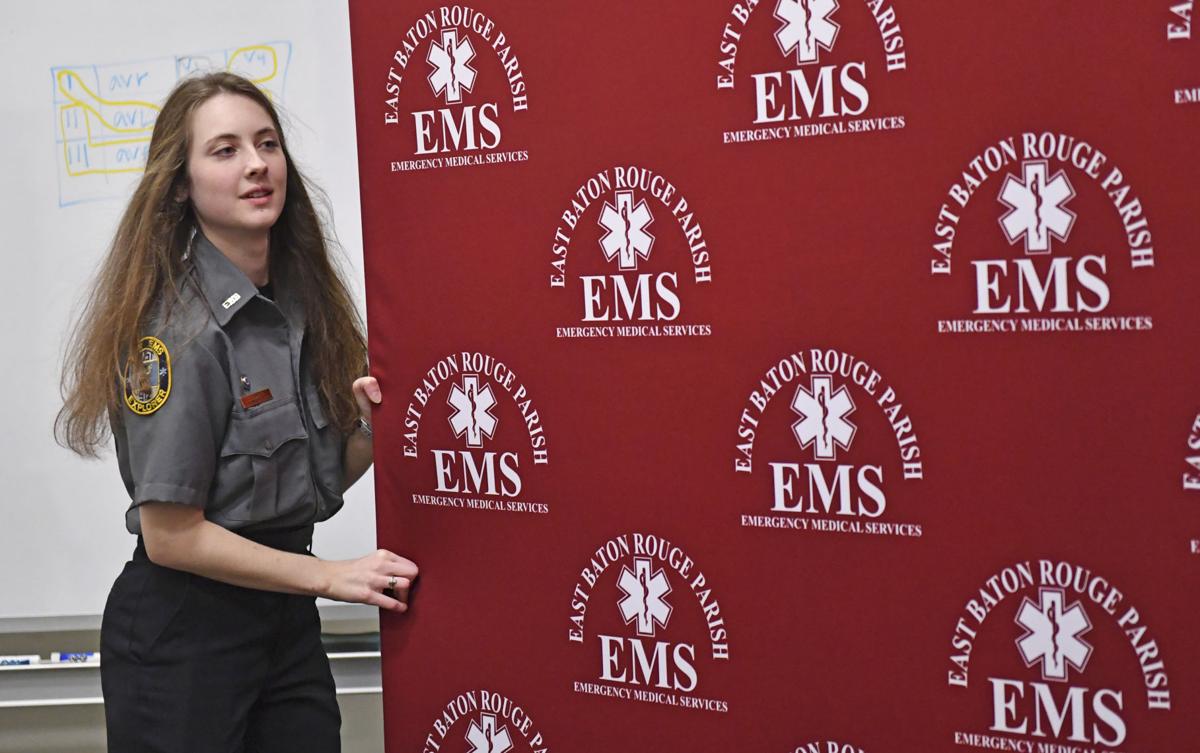 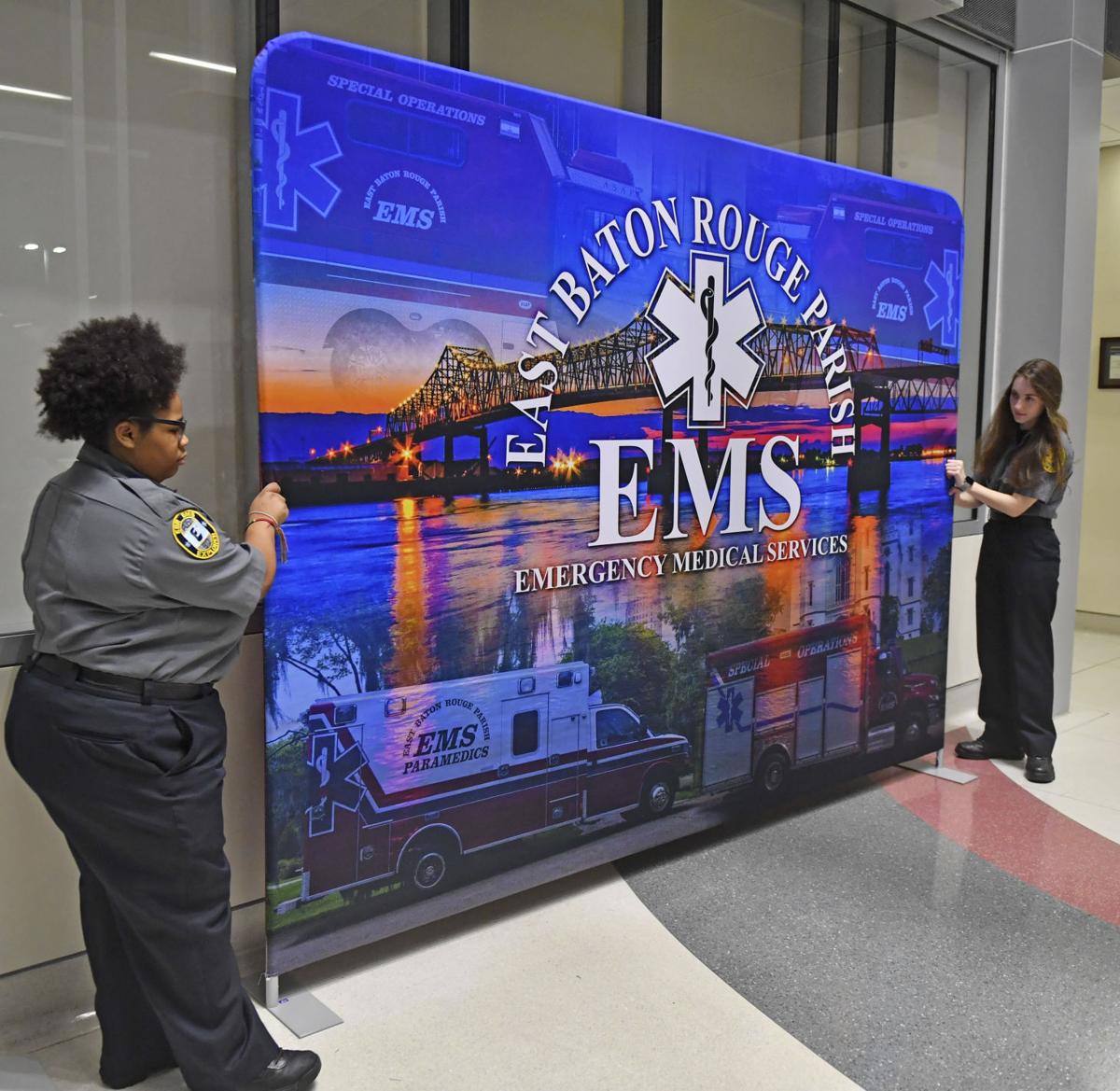 From left, EMS Explorer Gage Simoneaux shows one of several stuffed animals kept in the back of an ambulance for young children as he and Jayla Morgan show prospective explorers Reagen Sanchez and her brother, Chance Sanchez, the ins and outs of an EBR EMS ambulance during an event to showcase the EMS Explorers program, Thursday, January 9, 2020, at EMS headquarters in Baton Rouge, La.

Fourteen-year-old Chance Sanchez used to be a little wary of first-responders. He was adopted from the foster care system and said it's not unusual for kids like him to be stressed around firemen or police; after all, first-responders are the ones who often physically remove kids from their birth families.

But on Thursday night, Chance and his 15-year-old sister, Raegen — also adopted — showed up to the Emergency Medical Services headquarters near the Baton Rouge airport to learn about what it's like to be a paramedic through the EMS Explorers program.

Maybe, Chance said, he will grow up to be a first-responder and help people. The EMS Explorers program is the first step in that direction.

"I'm excited to meet new people and get in on the action," Chance said.

A fixture in the parish since the 1980s, the EMS Explorer Post 912 allows young people between the ages of 14 and 20 to train for their Emergency Medical Responder certification. Along with eight weeks of classes that include textbook study and practical application, explorers do “ride-alongs” with EMTs in the field where they assist with patient care.

"At first I really didn't want to do it because I found out it was an eight-week long class," said EMS Explorer President Jaci Smith. "But I decided to try it, and it's really helped me."

Jaci, who is a senior at Baton Rouge Magnet High School, said that she became an explorer because she thought she might want to go to medical school. But after being exposed to law enforcement in the field and following cases through the courts, she realized she doesn't actually want to study medicine after all, but rather hopes to one day attend law school.

That shouldn’t deter anyone from the program, she added. Not everyone wants to be a paramedic by the end of their time as an explorer, and that’s okay. From equipping explorers with people skills to organizational habits, the program can help foster a strong sense of character, no matter what profession the explorer ultimately pursues.

“We have a lot of kids that go on to be accountants or engineers,” Jaci said. “But then they keep this experience with them.”

17-year-old Jayla Morgan, on the other hand, definitely wants to become a paramedic. She is a senior at McKinley Senior High School and plans to attend EMT school upon graduation. When she discovered she had a knack for taking care of elderly family members, her grandfather started searching for programs to help her learn more about the medical field.

“It gives you a great experience while you are young to be able to go out and do the things we do,” Jayla said. “And you also make a change in people’s lives without knowing.”

The explorers are never alone as they learn the ins and outs of being a first-responder. During Thursday night’s information session, officials reinforced the idea that if the teens experience something potentially traumatic on a ride-along, they are urged to speak to someone.

Both Jaci and Jayla admitted they have been on some difficult calls in the field, from a gunshot victim who had committed suicide to an infant going into cardiac arrest.

“I kind of had a hard time dealing with it,” Jayla said of the gunshot victim. “But in the moment, I was able to do it because my adrenaline was running. I knew my skills and I was able to apply my skills to get in and out of the scene as I was supposed to.”

While the experiences of going on calls are sometimes serious and life-changing, the explorers said there are lighter aspects to the post that they look forward to each week. They also attend parades and marathons – anywhere EMS may be present to assist in crowds – which they said are fun. Jaci and Jayla always look forward to their trip to Avondale Scout Reservation, where they treat campers but also bond as a post.

Leeann Sanchez, 32, Chance and Raegen’s mother, said her children are excited about the prospect of joining the post – even if they are not sure if this is what they want to do with their lives.

She can see Raegan, who has always been interested in the medical profession, diving in and mastering the art of multitasking in stressful situations. As for Chance is a “by the rules” kid who won’t get flustered as he follows the procedures required.

Joining the EMS Explorer post will help them see reality for what it is, Sanchez said, rather than taking what they see on TV for granted. They will have the opportunity to step into the world and build their own stories.

“We’ve just tried to raise them to love people, and it’s important to me that we expose them to all types of people and that they learn how to love on people in all circumstances,” Sanchez said. “This is really them beginning their own memories in life. It’s kind of spreading their wings.”

Editor's note: A previous version of this story misstated Chance and Raegen Sanchez's ages. Chance is 14; Raegen is 15.