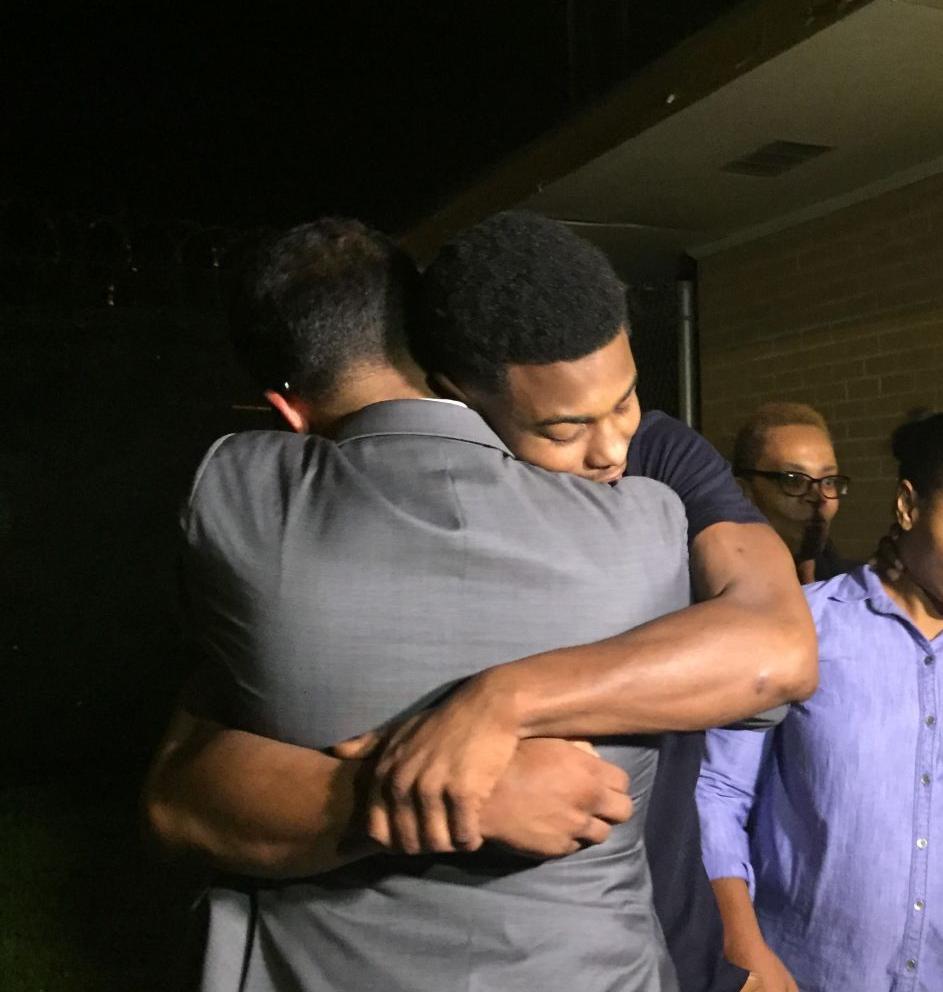 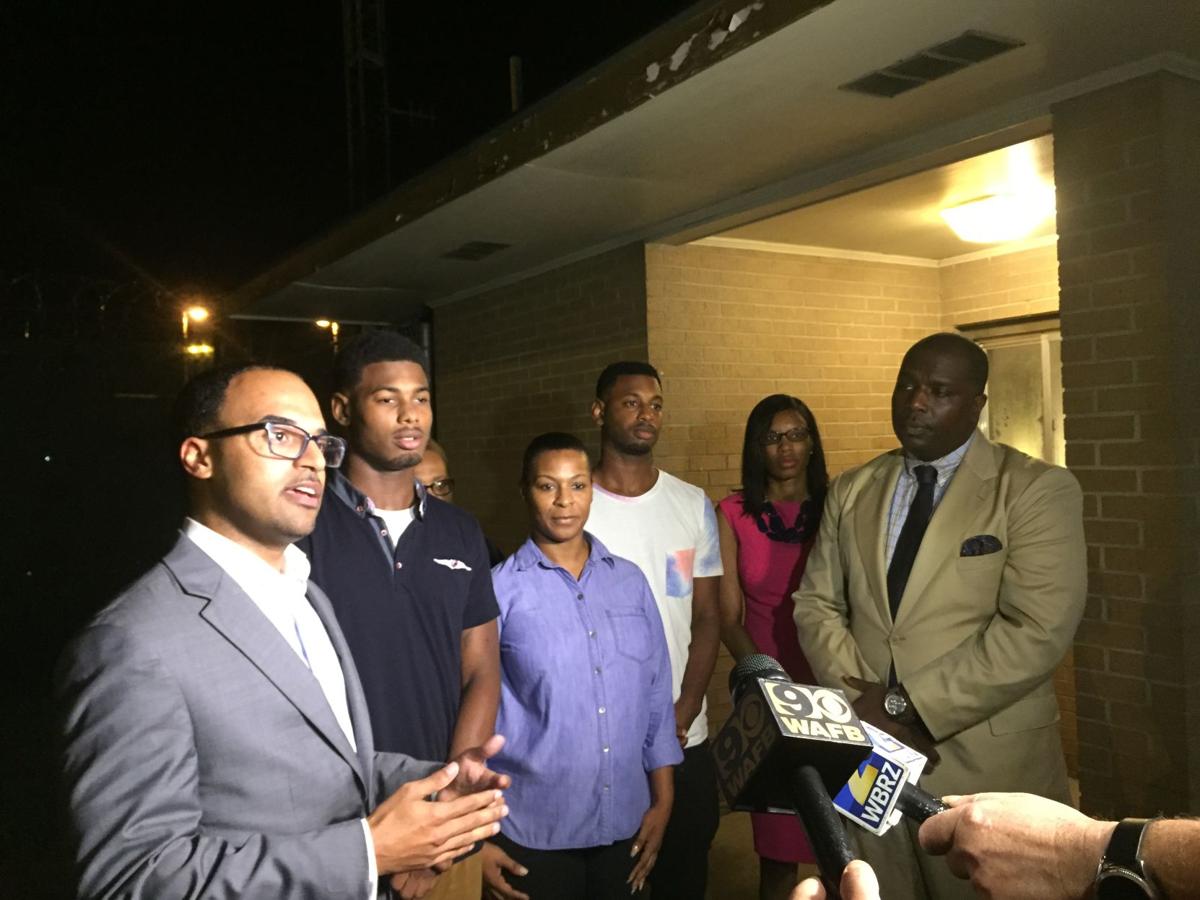 Ron Haley Jr. (left), speaks about the officer shooting involving his client Raheem Howard. Howard (left center) was released from jail early Tuesday, Oct. 2, 2018 and was greeted by family and his attorneys. 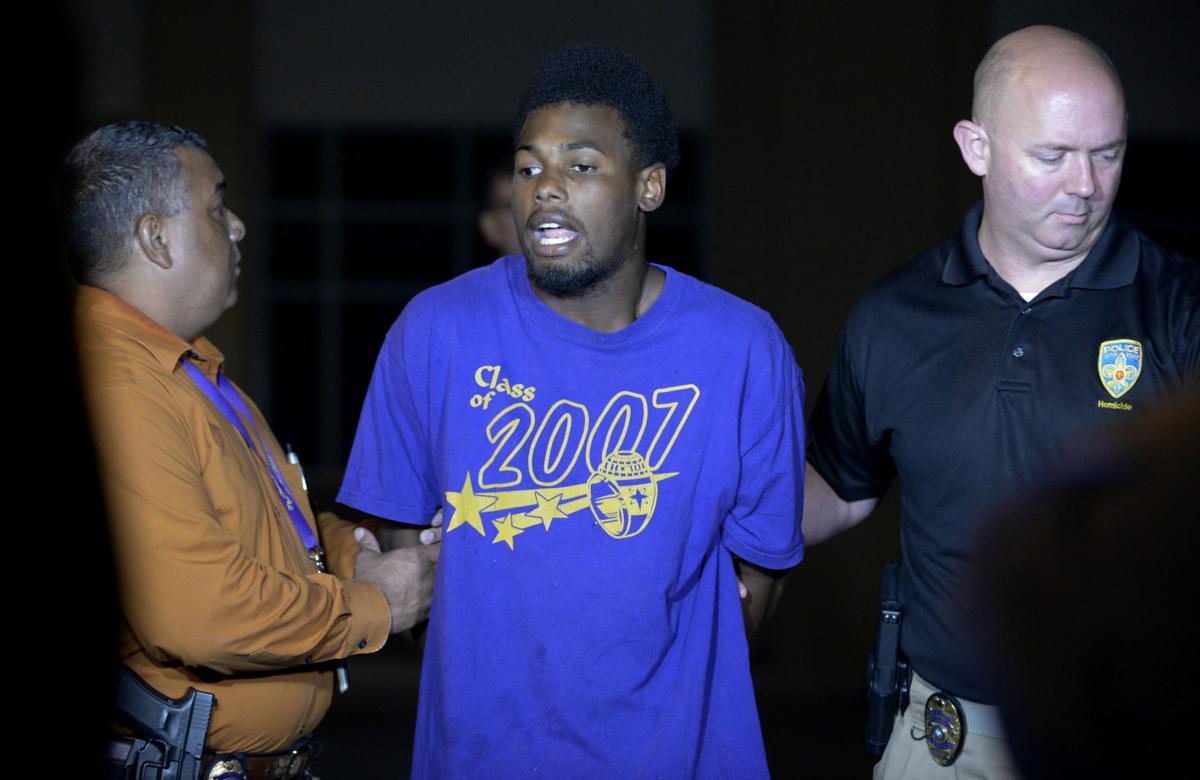 Baton Rouge Police Detective Joe Dargin, left, and Detective Jeff Anders, right, escort Raheem Howard, 21, of 6952 Carvel Court in Baker, Friday night, August 10, 2018, at the violent crimes unit in Baton Rouge, La. Howard is accused of firing a gun at a Baton Rouge Police Officer following a traffic stop on Tuesday night. He will be booked into the East Baton Rouge Parish Sheriff's Office on charges of attempted first degree murder and illegal use of a weapon.

Ron Haley Jr. (left), speaks about the officer shooting involving his client Raheem Howard. Howard (left center) was released from jail early Tuesday, Oct. 2, 2018 and was greeted by family and his attorneys.

Baton Rouge Police Detective Joe Dargin, left, and Detective Jeff Anders, right, escort Raheem Howard, 21, of 6952 Carvel Court in Baker, Friday night, August 10, 2018, at the violent crimes unit in Baton Rouge, La. Howard is accused of firing a gun at a Baton Rouge Police Officer following a traffic stop on Tuesday night. He will be booked into the East Baton Rouge Parish Sheriff's Office on charges of attempted first degree murder and illegal use of a weapon.

Raheem Howard said the early August day when a police officer shot at him and then accused him of firing first — the latter of which investigators later said evidence did not support — was set to be a good one.

The 21-year-old had just been offered a job as a dishwasher at The Chimes restaurant on Coursey Boulevard, an interview he drove to in the used car his mom had recently purchased for him. He had picked up the vehicle from the shop that day, and the temporary tags were still in the window.

But then, while driving home some other friends who had also been offered jobs at the restaurant, he saw lights from a Baton Rouge Police car behind him. And quickly, everything changed.

Scared because of a past bad experience with police, Howard ran from the car. The officer, Yuseff Hamadeh, followed. Howard said he remembers hearing the officer yell that he would kill him.

Howard ran down a cut-through between two yards and entered the backdoor of a friend's home. He said the officer busted open the front door soon after as he retreated out the back. And at some point, the officer fired his gun.

Howard kept running, finally hiding under someone's house until he took refuge in friend's home. He was arrested days later. Howard never made it to his orientation at the restaurant.

Police originally said that Howard first shot at Hamadeh, prompting the officer to return fire. But Howard was adamant that he never fired at the officer or had a gun, even pleading with reporters after his arrest to look at body camera footage to corroborate his innocence. Witnesses reported they only heard one shot.

No one was injured in the shooting.

Hamadeh initially pulled Howard over for a missing license plate, police said, though Howard said he had a temporary tag in the window.

No video evidence captured the shooting, police said, because Hamadeh's body camera was turned off, a policy violation, as was his front dash camera. Weeks later, East Baton Rouge District Attorney Hillar Moore III said there was insufficient evidence to pursue a charge of attempted murder of a police officer against Howard.

Even though that case was dropped, Howard remained in Parish Prison completing time for a probation revocation on two prior, unrelated misdemeanors. He was released in the early morning hours of Tuesday, after spending almost two months behind bars — more than half of which he was booked under attempted murder of a police officer, a crime that can send a person to prison for decades.

"I’m just blessed to have this support team and the community that came forward," Howard said Tuesday, smiling and surrounded by his mother, brother and attorneys. "Happy to be home with my family."

Why DA refuses to proceed with case vs. man accused of firing at Baton Rouge officer

Baton Rouge Police officials eventually released the limited video and audio they had of the officer-involved shooting — audio from the officer's vehicle's rear camera, which was facing downward, and a neighbor's surveillance video that only showed the initial traffic stop. The audio supported Howard's claim that only one gunshot was fired, and witnesses said they never saw Howard with a gun.

Hamadeh was also the officer who fatally shot a man in June 2017 after a traffic stop. In that incident, police have said, Hamadeh shot Jordan Frazier after Frazier exited the car and turned a pointed a weapon at officers.

"Right now my main concern is to fight for justice," Howard said. "Not just for me, but for the one who got killed by the police (officer), for the guy Jordan Frazier."

“Everybody who’s involved in a police attack, they didn’t have a voice to say what went on," Howard said. "I survived. ... I just want justice."

The day after the Baton Rouge Police Department announced it would not yet release the body and dash camera video from an Aug. 7 officer-invol…

And while the Howard family embraced in the dark hours of Tuesday morning, they also were cognizant of their work ahead.

"What I'm hoping to see move forward with this case is that the officer be arrested because he absolutely tried to kill Raheem," said his mother, Tenesia Howard. "It’s not fair he’s sitting there earning a paycheck and he’s not being charged.”

“He did not act alone," she said. "The police officer lied, but he had so many other officers that were backing him in that lie, he’s not in this by himself.”

Baton Rouge Police Deputy Chief Jonny Dunnam reminded the public that BRPD detectives were the ones who took the evidence of the shooting to the district attorney, which led to the case being dropped.

"That in itself should prove there's no cover up," Dunnam said.

But the trauma from the incident continue to affect Howard and his family. Howard, who's been convicted twice of fleeing from officers, said he is still scared from a prior run-in with officers.

"The first time I got pulled over, I got beaten up real bad," Howard said. "So ever since then, I’m nervous, I'm paranoid.”

"I don't feel safe," Howard said. His mom said that when saw a police car Tuesday, her son asked her to slow down, no matter her current speed.

“I’m not just concerned because this happened to my son," Tenesia Howard said, "but there are so many young black men that are coming up that I don’t want to sit there and look at the news and see the same thing that happened to my son happen to somebody else’s son.”

Ed Pratt: Far too many 'what ifs' in recent Baton Rouge police incidents

It’s always a tough thing to deal in hypotheticals or “what ifs.”