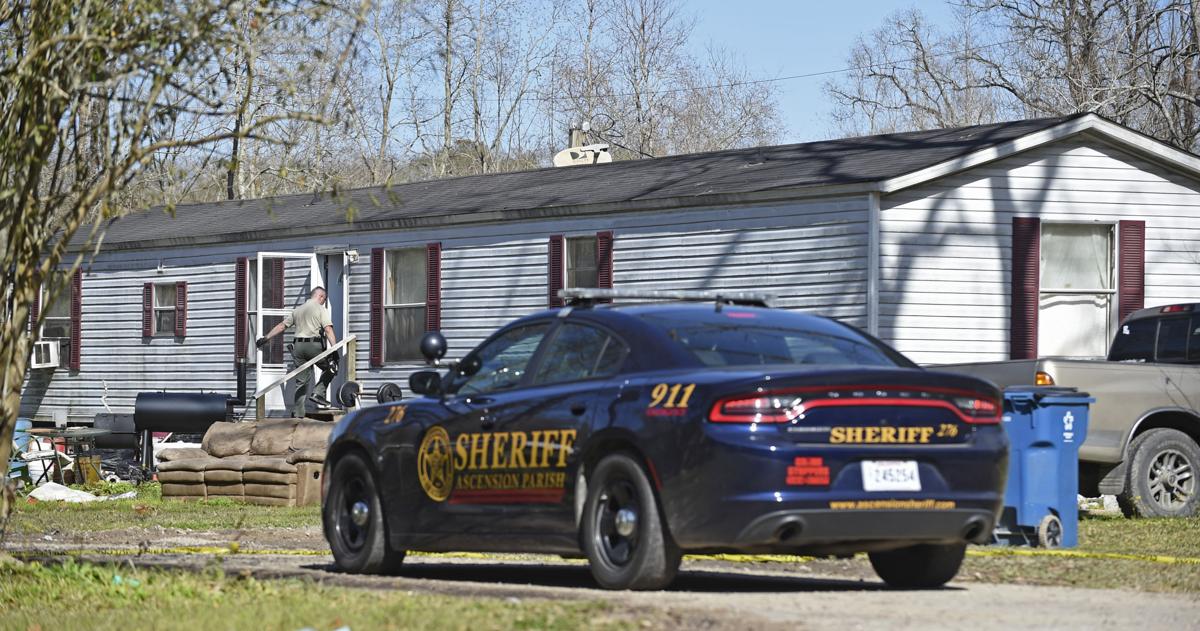 Investigators work the scene of a shooting on Saturday, Jan. 26, 2019, in Ascension Parish in Louisiana. Authorities in Louisiana say a shooting has left five people dead in two parishes. A suspect was at large and was being sought. Officials say the Saturday morning shootings happened in Ascension and Livingston parishes, about 70 miles (113 kilometers) west of New Orleans. Dakota Theriot was being sought by authorities. (Hilary Scheinuk/The Advocate via AP) 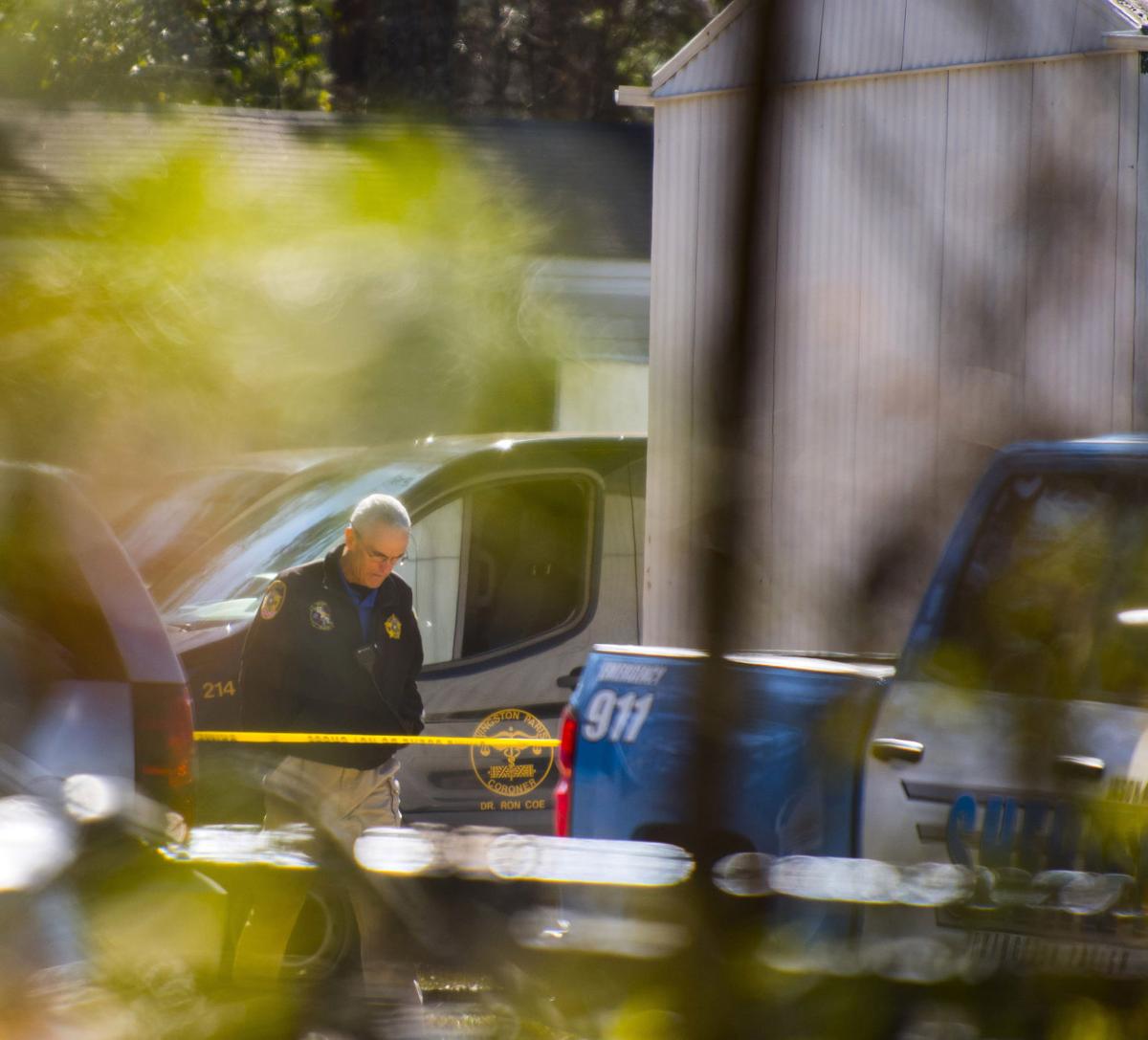 A Livingston Parish Sheriff's Office deputy passes near a dark-colored Livingson Parish Coroner's Office van parked next to a trailer off Courtney Road in Walker, as a multiple homicides scene there is worked by LPSO personnel, Saturday, Jan. 26, 2019. Dakota Theriot, 21, is suspected of killing in Billy Ernest, 43, Tanner Ernest, 17 and Summer Ernest, 20, in Livingston Parish, as well as Elizabeth Theriot, 50, and Keith Theriot, 50, in Gonzales, according to authorities from Livingston and Ascension Parishes. 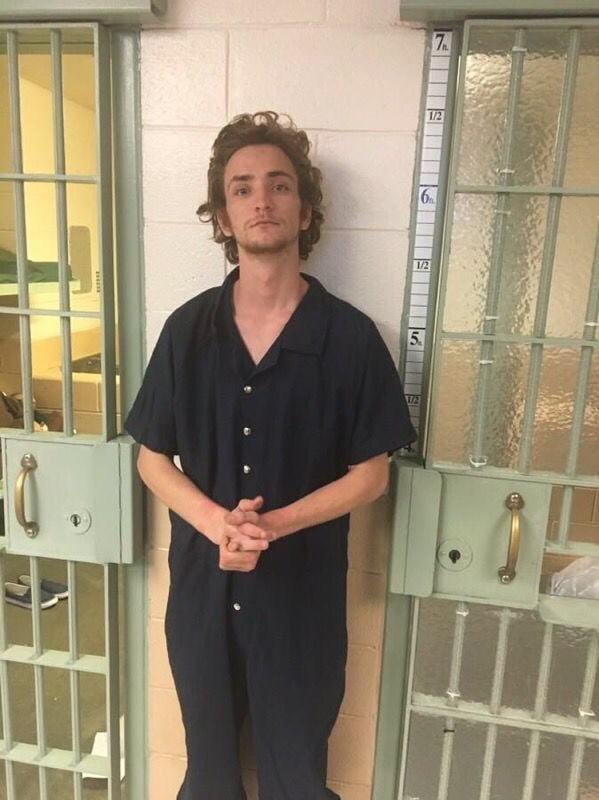 Investigators work the scene of a shooting on Saturday, Jan. 26, 2019, in Ascension Parish in Louisiana. Authorities in Louisiana say a shooting has left five people dead in two parishes. A suspect was at large and was being sought. Officials say the Saturday morning shootings happened in Ascension and Livingston parishes, about 70 miles (113 kilometers) west of New Orleans. Dakota Theriot was being sought by authorities. (Hilary Scheinuk/The Advocate via AP)

A Livingston Parish Sheriff's Office deputy passes near a dark-colored Livingson Parish Coroner's Office van parked next to a trailer off Courtney Road in Walker, as a multiple homicides scene there is worked by LPSO personnel, Saturday, Jan. 26, 2019. Dakota Theriot, 21, is suspected of killing in Billy Ernest, 43, Tanner Ernest, 17 and Summer Ernest, 20, in Livingston Parish, as well as Elizabeth Theriot, 50, and Keith Theriot, 50, in Gonzales, according to authorities from Livingston and Ascension Parishes.

With each spin through the revolving door that brings police and the mentally ill together, accused killer Dakota Theriot grew more unstable.

Law enforcement was aware of Theriot before he was accused of killing five people last month. Police and court records reflect relatively minor offenses, such as smoking weed with his parents, to horrifying violence that included beating his wife and threatening to kill his family. He never faced a lengthy prison term or longterm hospitalization. For many offenses, he was never arrested.

He's now accused of destroying two families in shootings on Jan. 26 that shocked the capital region.

“This case is an extremely horrific example of what we all have known are the shortcomings of our national system of mental healthcare,” St. Charles Parish Sheriff Gary Champagne said.

Theriot, 21, once threatened to burn the family house down. His ex-wife told police there was a time Theriot "snapped," pulling the side mirrors off her car to use as a weapon. He also was accused of choking her, knocking out her teeth and throwing her through a window and breaking her wrist.

Investigators said he smoked weed and drank alcohol that mixed poorly with the anti-psychotic medication he’d been prescribed. His wife told police he had been diagnosed with schizophrenia.

The fact that someone is mentally ill does not dictate homicidal violence, but the accusation that Theriot killed five people in a rampage that spanned at least an hour and two parishes is one that experts say is a poignant and tragic reminder of the dangerous reality that can fester in a broken mental health system where treatment is little more than crisis stabilization.

According to St. Charles Parish law enforcement records, Theriot's loved ones made frequent calls to police — particularly during 2016 when Theriot was staying at the modest Norco home he shared with his parents and under the tireless cloud of steam billowing from the Shell refinery for which the town is named a block over. Often, he was hospitalized on an involuntary hold after those police encounters.

Theriot had found himself living in a region where every deputy has completed the 40-hour crisis intervention training known as industry standard for de-escalating mental illness-related calls. Champagne, a former president of the National Sheriffs Association, has spent years noticing how law enforcement conferences had become dominated by talking about how police have replaced asylums as the frontlines for mental health care.

He’s more heightened to the issue than maybe other law enforcement leaders are, and when the news broke about Theriot’s alleged crimes, he reviewed his own deputies’ prior interactions with the suspect to ensure they had responded efficiently.

“There are a lot of people, not just in our parish but all over the place, that fit that kind of bill,” Champagne said Thursday, sitting before a series of fanned-out incident reports in his expansive department headquarters. “He ends up killing five people and everybody looks and says ‘Oh, well, what didn’t we do?’ Well I don’t know what could’ve been done more at this point in time. He’s going in to people who are supposed to be treating him and helping him and I’m sure they did the best they could with what they had and released him after he’d stabilized, but he’s an adult and once they release him and stabilize him (he’s gone.)”

Experts say that, generally, those within the system respond to mental health crises in the way they’re designed. Families offer concern, police respond, emergency room doctors stabilize and release, usually with the promise the client will continue outpatient treatment. Most do continue that treatment because they are lucid enough to realize that clinic visits are a better way to live than in a psychiatric ward or prison, according to Stephen Aguillard, who runs the Capital Area Human Service District’s mental health branch.

But many others don’t. The system’s failure comes in the unpredictable nature of an adult, who ultimately is responsible for their own behavior and health care, when they are also tasked with wading through life with an altered state of mind, Aguillard said.

“If you have a gap in the service anywhere, I’d say it’s that you have a lot of family members who have some type of psychological illness or behavioral issue and they’re trying to get help for them but their hands are tied because that person’s an adult, they still have the rights to choose what they want,” he said. “It can be very, very frustrating for the family.”

There are options, such as seeking an order of protective custody from the parish coroner to execute an involuntary hospitalization, or seeking longer-term facility, the former of which requires imminent danger and the latter a costly and scarce option.

Aguillard hopes the recently voter-approved Bridge Center in Baton Rouge will act as an option between long-term and crisis care, a place that eases the burden on police response. But then there are other critical issues like transportation and housing that can overshadow mental health care in a patient's life, and the funding for home-visit clinicians is limited.

On their second try, mental health and law enforcement advocates convinced voters to pass a property tax to fund a psychiatric crisis center.

“If you’re not going to have longer term beds, you need more oversight of managing these people,” he said. “None of the insurance pays for case managers to say ‘what are the physical needs you may have that may make this person not capable of having ongoing outpatient treatment.’ There’s no reimbursement for that so they aren’t provided for those people, they may have burned their family out or their family doesn’t know what to do anymore so they’re not around.”

Christine Miller, a neuroscientist and retired academic, spent much of her career researching schizophrenia but most recently has begun studying the intersection of illicit substance abuse and mental illness.

She points to studies that have found that subjects who both use drugs and have schizophrenia — such as Theriot — are nine times more likely to commit murder or other extreme acts of violence.

“When people with psychosis are on the anti-psychotic medications it does really help control the delusional thinking, the paranoia, the hallucinations, and all of those are involved with violence… The single most dangerous symptom is paranoia because nothing causes violence like fear,” Miller said.

Reports obtained by The Advocate do not indicate Theriot's compliance with anti-psychotic medication, but do point to consistent drug use, specifically marijuana. The documents note his parents, Keith and Elizabeth Theriot, asking police for hospitalization to help their son, and talking about wanting long-term care for him.

Theriot drove from Louisiana to Virginia after the Jan. 26 shootings to seek refuge with family members, particularly his grandmother, in the area, police have said. Theriot's public defender said at an extradition hearing Friday that the suspect wanted to kiss his loved ones goodbye, knowing he'll never see the outside of a jail again, according to The Associated Press. Even with that objective, Theriot still pulled up at his grandmother's home with a gun in his hand.

Records about Theriot's police interactions over the last four years in Louisiana don't outline the relationship he had with family in Virginia, and they have chosen not to speak with media, but school officials have previously said Theriot lived in Virginia for several years as a teenager. He was returned to Louisiana on Friday to face charges in the killings.

Champagne said he often sees parents and other family members coming to the sheriff’s office wanting advice or direction. Their loved one may be worrying them, but not yet meet the involuntary committal criteria of being a danger to themselves or others. They may not have insurance or the finances to cover extensive treatment, and are exasperated, exhausted.

“(Theriot’s) parents, I think like all parents, probably wanted to help him and didn’t want to see us lock him up and throw away the key. … I wish there was something else I could’ve done but this guy isn’t the only person out there with these issues and which one is going to end up snapping some day and trying to kill out his whole family we don’t know,” he said. “I’m not trying to excuse him or justify him at all, frankly he’s got to deal with (his actions). … I’m not justifying it at all, he’s still responsible for his behavior.”

He and Aguillard both believe the solution is funding for options like follow-up care after crisis hospitalizations and expanding court services including diversionary programs or probation conditions that mandate outpatient treatment. Further, Champagne noted a need to address health privacy laws that don’t allow law enforcement any background knowledge on a suspect’s prior mental illness treatment, hospitalizations or diagnoses before they’re responding to a potentially dangerous response situation.

WARSAW, Va. — Dakota Theriot sought familiar surroundings after allegedly killing five people, including his parents and his girlfriend, but f…