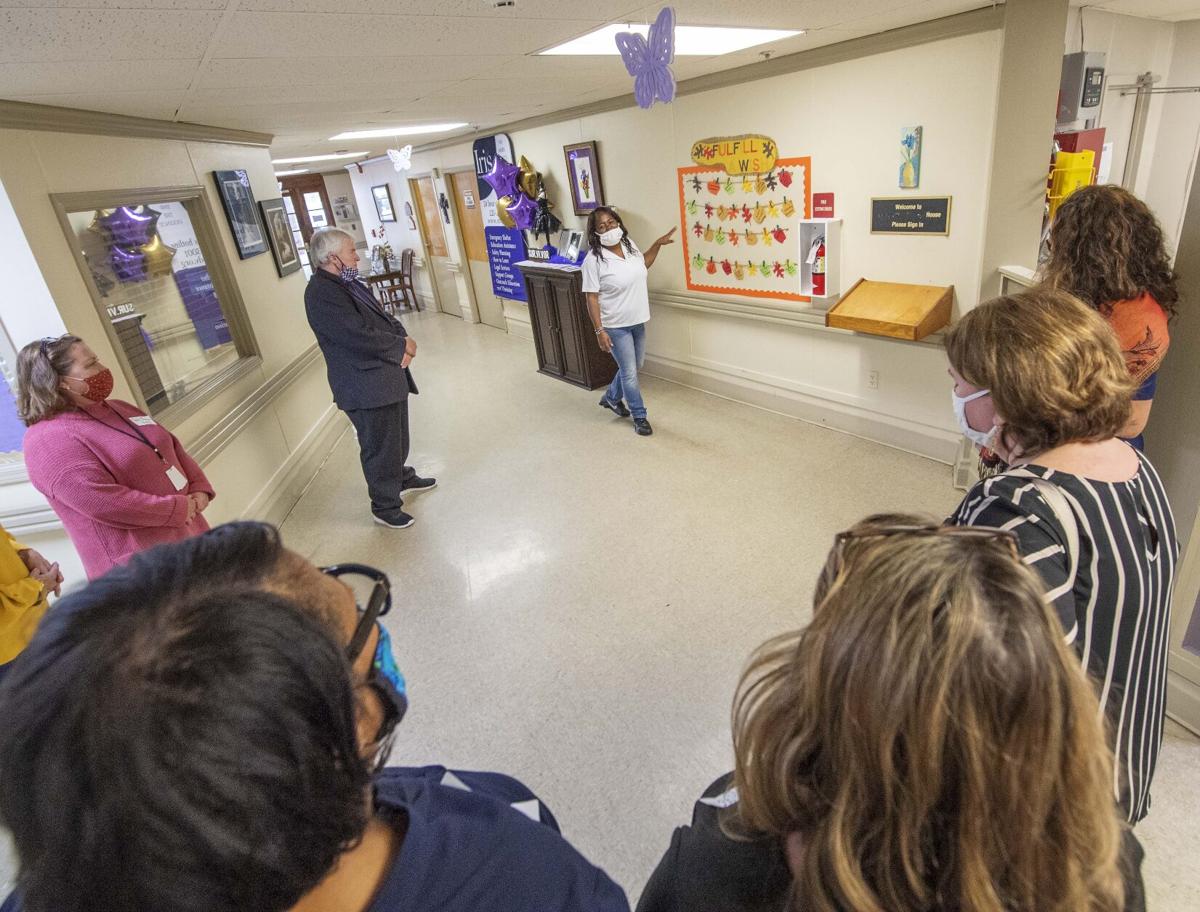 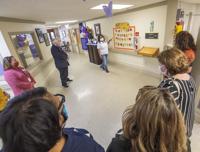 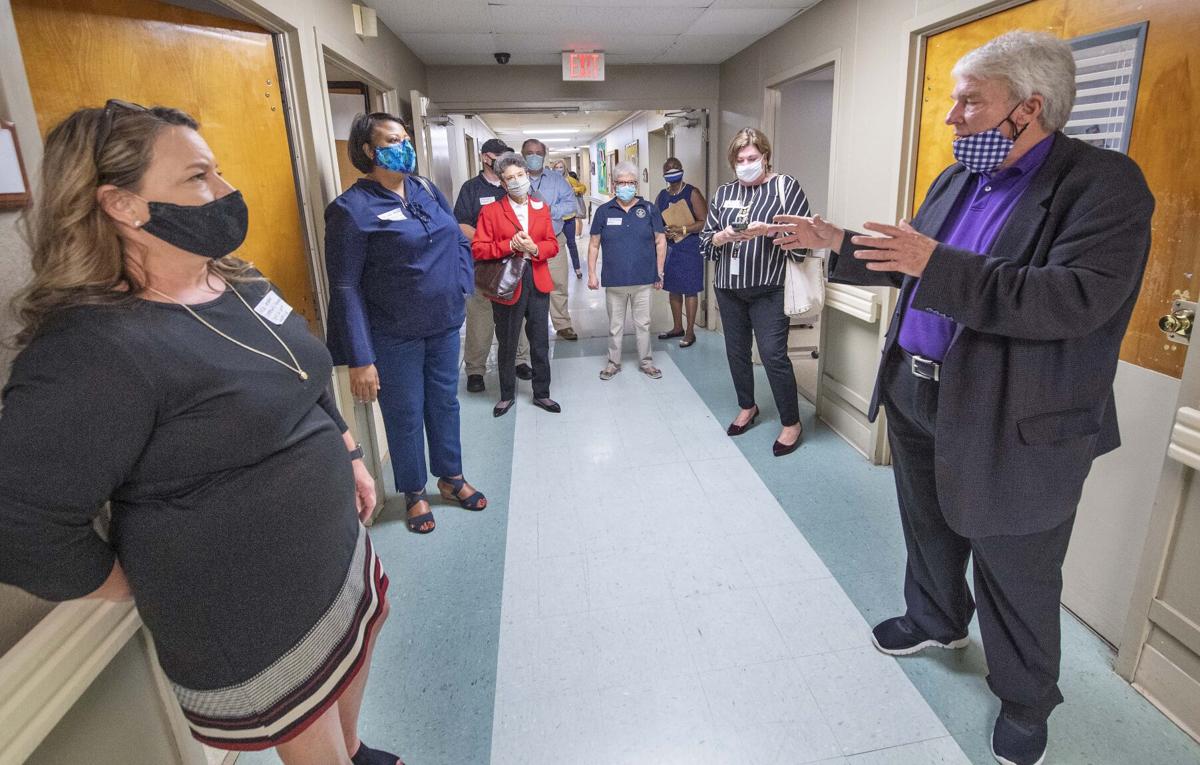 The shoe and purse room is shown during a tour of the new IRIS domestic violence shelter for domestic violence victims in this region Tuesday November 10, 2020, in Baton Rouge, La. This is multi-parish facility.

The shoe and purse room is shown during a tour of the new IRIS domestic violence shelter for domestic violence victims in this region Tuesday November 10, 2020, in Baton Rouge, La. This is multi-parish facility.

Amid the rise in domestic violence incidents and homicides that officials say have spiked during the coronavirus pandemic, women in abusive relationships and their children have a new, larger shelter that can help them leave their abusers for good.

IRIS Domestic Violence Center, which provides emergency housing and other help for victims of domestic violence, recently unveiled a new, far larger shelter that has been created from a former 92-room nursing home in Baton Rouge. It serves families in a seven-parish area in and around Baton Rouge.

The new shelter replaces a 22-bed IRIS facility that, on any one day, had five to eight beds unable to be used and that lacked the transitional housing, extra living space, storage and offices that the new building now offers.

The new facility received its first family in June.

"It's larger. It's more efficient," said John Price, executive director of IRIS. "There's really no comparison to where we were to where we are now."

The change comes as city and law enforcement leaders have repeatedly implored residents to remain alert for signs of abuse loved ones may be facing and urged victims to reach out to law enforcement or advocates for help.

"Many in our community have been isolated and disconnected from resources in recent months," said Mayor-President Sharon Weston Broome at a recent press conference. "Baton Rouge has seen a 700% increase in domestic violence cases since last year."

The pandemic has trapped many victims indoors with their abusers and away from those who might intervene to help them.

In 2019, there were just four deaths from two separate domestic violence incidents. Police and advocates had hoped that was the start of a long-term trend.

But there have been 19 domestic violence deaths so far this year, according to East Baton Rouge District Attorney Hillar Moore III. Nine of those involved intimate partners.

IRIS has long sought to give women and their children a refuge when they need to escape. During a pandemic, the organization has provided them with a way out.

The new shelter housed seven adults and 13 children as of Tuesday. During the pandemic — especially during the stay-at-home order in the spring — domestic violence increased noticeably but not as many people were trying to use the shelter and its services.

"We didn't have a whole number of people calling asking for services or trying to get information," Price said. "I attribute that to the idea that when we did stay-at-home orders, victims were not able to find an appropriate time or place to be able to get away from abusers in order to be able to make those calls."

Price made his comments as he and other shelter officials led a tour Tuesday of the new facility.

One 22-room wing of the nursing home has been set aside for emergency, 45-day stays. Another is designated as transitional housing for up to 12 months for as many as six families at a time. That wing makes use of more rooms for a single family and has set aside others for group gatherings.

The goal is for women who have escaped abusive situations to have a safe place to accumulate the money and other resources to find permanent housing.

Advocates have said that leaving an abusive relationship — and not returning — remains one of the most challenging feats for victims ensnared in domestic violence. Material obstacles, such as providing food, clothing and shelter for themselves and their children, can deter victims from taking the necessary and urgent steps to leave.

"The data shows that over the years, women take about seven times leaving an abuser before they can finally get all the way out," Price said. "And it's not because they don't want to leave. It's because there are no viable options at the end of that time period (they initially leave an abuser)."

Other wings are dedicated to shelter intake, clothing storage, a children's area and administrative and legal services, such as for handling protective orders.

Some of those storage rooms housed bassinets, while others had clothing piled on shelving and sorted by size. Many women who leave their abusers do so in a hurry, with few clothes and little money to take the next step forward, Price explained.

He added that the combination of emergency and transitional housing, along with other services, is designed to empower women to leave abusive relationships and get back on their feet.

IRIS is about a $1 million to $1.3 million per year operation, IRS records show. The larger building is more costly to run, but IRIS officials said the cost of renovating their existing shelter and the ability to provide transitional housing at the new shelter instead paying for housing off-site helped make the move make sense financially.

Longtime IRIS board member Sylvia Duke, who recently died from complications with COVID-19, also told Price that the nonprofit was going to make the move to the bigger facility with the demands being put on the old shelter and the chance to offer a greater continuum of services in the new one.

"I think sometimes you've got to take a leap of faith," Price said.

A Baton Rouge man is under indictment in the June 6 stabbing death of his girlfriend at a Jefferson Highway apartment they shared.