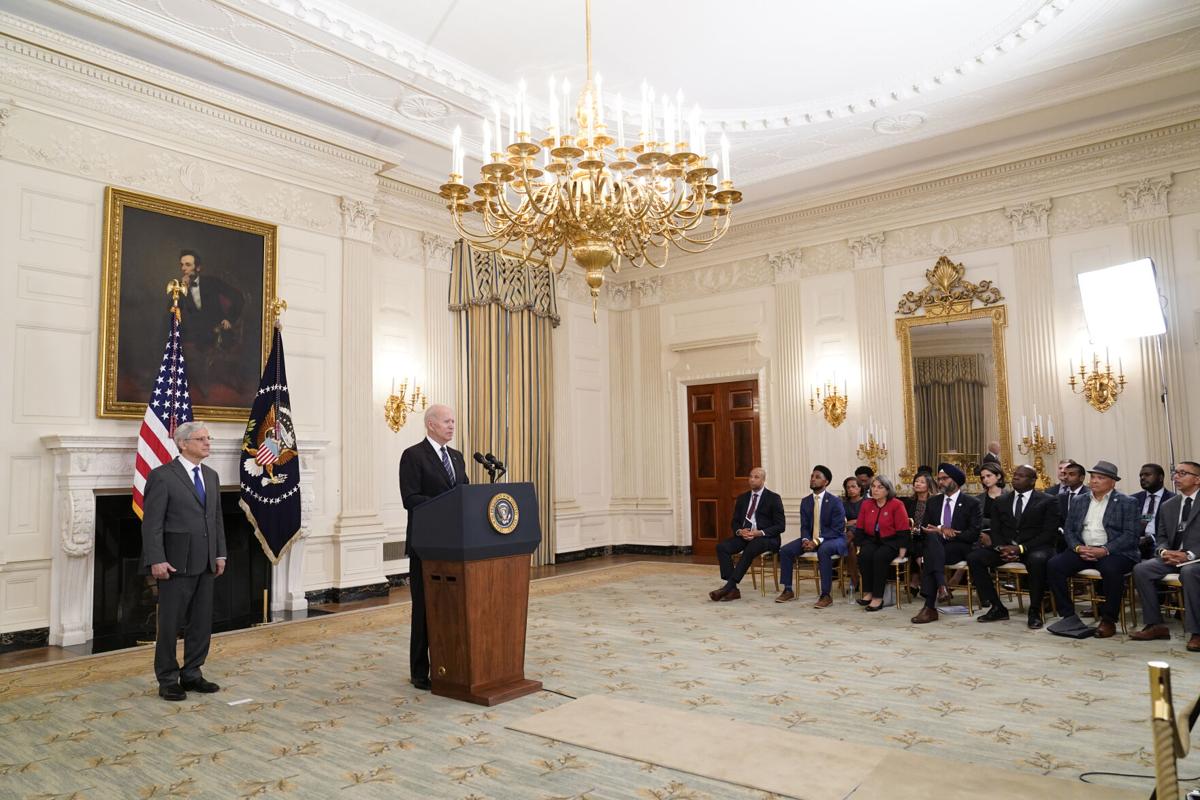 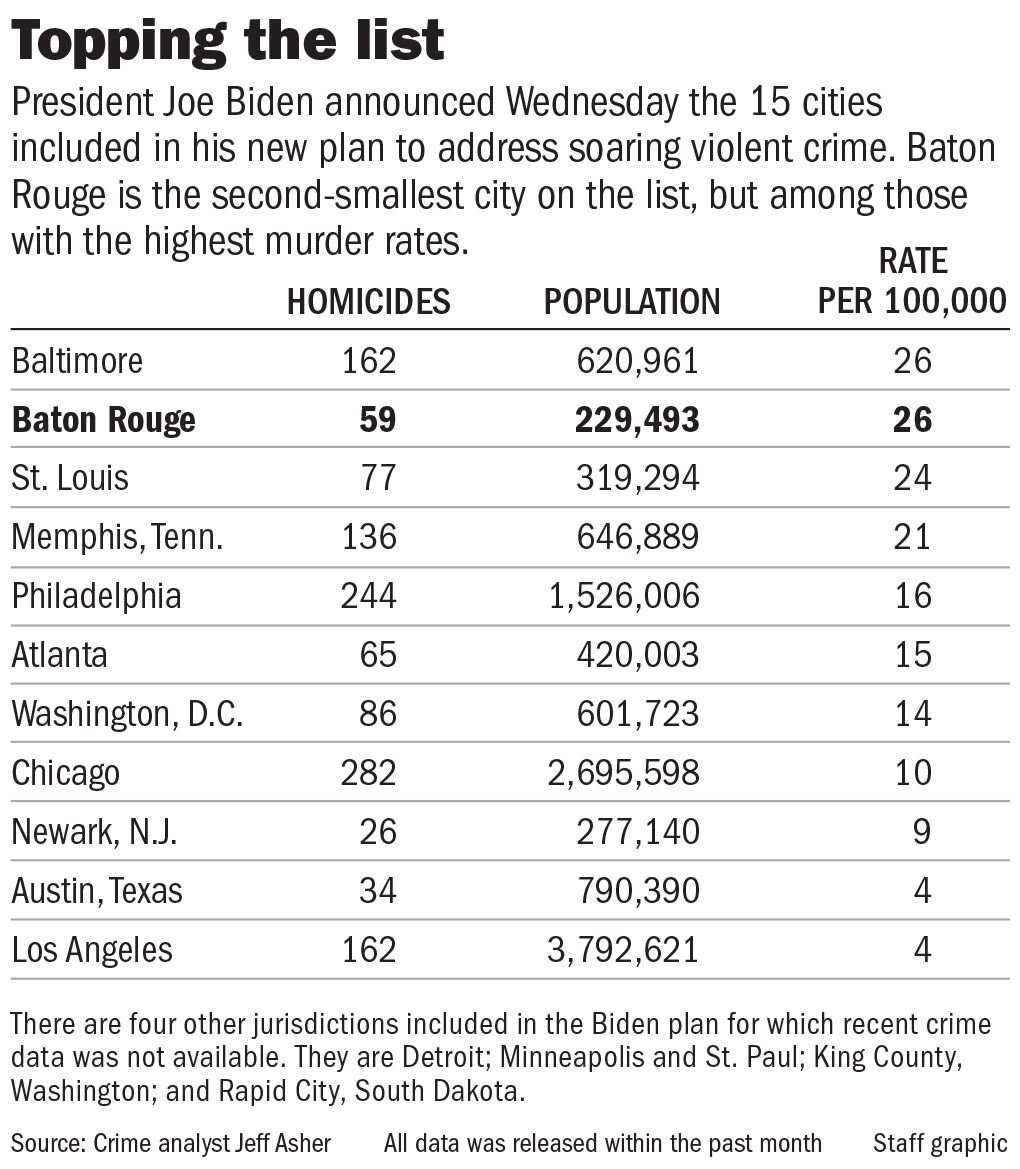 When President Joe Biden unveiled a new plan to combat violent crime in 15 American cities and counties, including Baton Rouge, he touted the collaboration but said little about why his administration chose those communities.

Some are obvious picks: Baltimore and Chicago often star in news stories and political arguments on the topic.

Baton Rouge — the second-smallest jurisdiction in the lineup — has rarely seen that level of national attention. But its homicide rate trends among the highest on the list, less than a decimal point below top-ranking Baltimore, according to an Advocate analysis of recent crime data.

"I think we've demonstrated our strong commitment to solving the complex problem of public safety here in Baton Rouge, and we welcome assistance from the White House in this process," Broome said in an interview Thursday. "We were ahead of the curve — we laid a foundation — but we still have work to do."

With unprecedented murder rate in Baton Rouge, police chief says time to 'get a handle on it'

BRPD Chief Murphy Paul traveled to Washington DC to meet with Biden on Wednesday. The chief attended the White House press conference where Biden pledged to bolster local law enforcement and crack down on the "merchants of death" who sell illegal guns.

Paul declined all local media interviews on Thursday and flew home early because he was sick, a BRPD spokesman said. He said will provide comments to local media on Monday, however.

Since the start of 2021, Baltimore and Baton Rouge both saw a murder rate of about 26 per 100,000 residents, making them the deadliest of the 11 cities, according to data tracked by New Orleans crime analyst Jeff Asher. St. Louis ranks third with about 24 murders per 100,000, according to data from the end of May, which was the most recent available.

Among those with the lowest murder rates were Los Angeles, which has a high number of killings but a massive population, and Newark, where authorities have recorded 26 murders to date this year. The population of Newark is about 50,000 higher than Baton Rouge, which has recorded 59 murders citywide in 2021, according to unofficial records maintained by The Advocate.

Nationwide, homicides rose 30% last year — a massive uptick after a decades-long decline affecting cities big and small during the pandemic — and have shown no signs of slowing, according to a fact sheet outlining the Biden plan. The first quarter of 2021 saw a 24% increase over the previous year.

"This is not a time to turn our backs on law enforcement," Biden said during the Wednesday press conference, reiterating his opposition to the "defund police" movement that arose last year.

Paul has repeatedly emphasized the importance of a holistic approach to fighting crime.

"There is nothing — let me be clear about this — nothing simple about policing in America today," Paul said to White House press after his meeting with Biden. "It is complex, and we have to speak to that."

Paul also said the group discussed using some federal dollars to get more officers on the streets, an effort to fight crime and boost morale in police agencies across the country.

Leaders from the 15 cities and counties will meet periodically with the Biden administration over the next 18 months, officials said. Their focus will include implementing targeted crime-reduction strategies, which often means identifying people most likely to commit gun violence and offering them another path.

"They intervene before it's too late," Biden explained. "These interrupters turn down the temperature, halt the cycle of retaliation, connect people to social services. And it works."

Such programs have been shown to reduce violence by up to 60% in high-crime areas, Biden said. Newark saw record low crime rates in 2019, five years after launching its Newark Community Street Team.

The Baton Rouge "violence interrupters" will adopt a similar model as part of the Safe Hopeful Healthy BR initiative. Inaugural street team members finished training earlier this month and will soon start working in the 70802 and 70805 ZIP codes, two areas that historically have seen a lot of violence.

As Baton Rouge faces soaring murder rate, these 'street teams' are training to stop the violence

As Baton Rouge faces an unprecedented rate of murders, the city is training teams of residents to intervene before violence happens.

Biden said he encourages cities to use funding from the American Rescue Plan to curb violence, something Baton Rouge leaders were already pursuing with the Safe Hopeful Healthy initiative that Broome launched last year.

Biden also announced a "zero tolerance" policy for gun dealers violating regulations for sales and distribution. He called on Congress to increase funding for the ATF to better support local and state law enforcement agencies.

Broome said the plan will include opportunities for both federal funding and philanthropy, though the exact dollar amounts are still being ironed out. It will also include training and technical assistance.

"We now have the weight of the federal government assisting in our prevention of crime," Broome said. "I'm optimistic that we'll see our crime numbers begin to decrease over the next six months."

When Baton Rouge Police Chief Murphy Paul got a call on Fathers Day inviting him to the White House, he thought it was a joke.