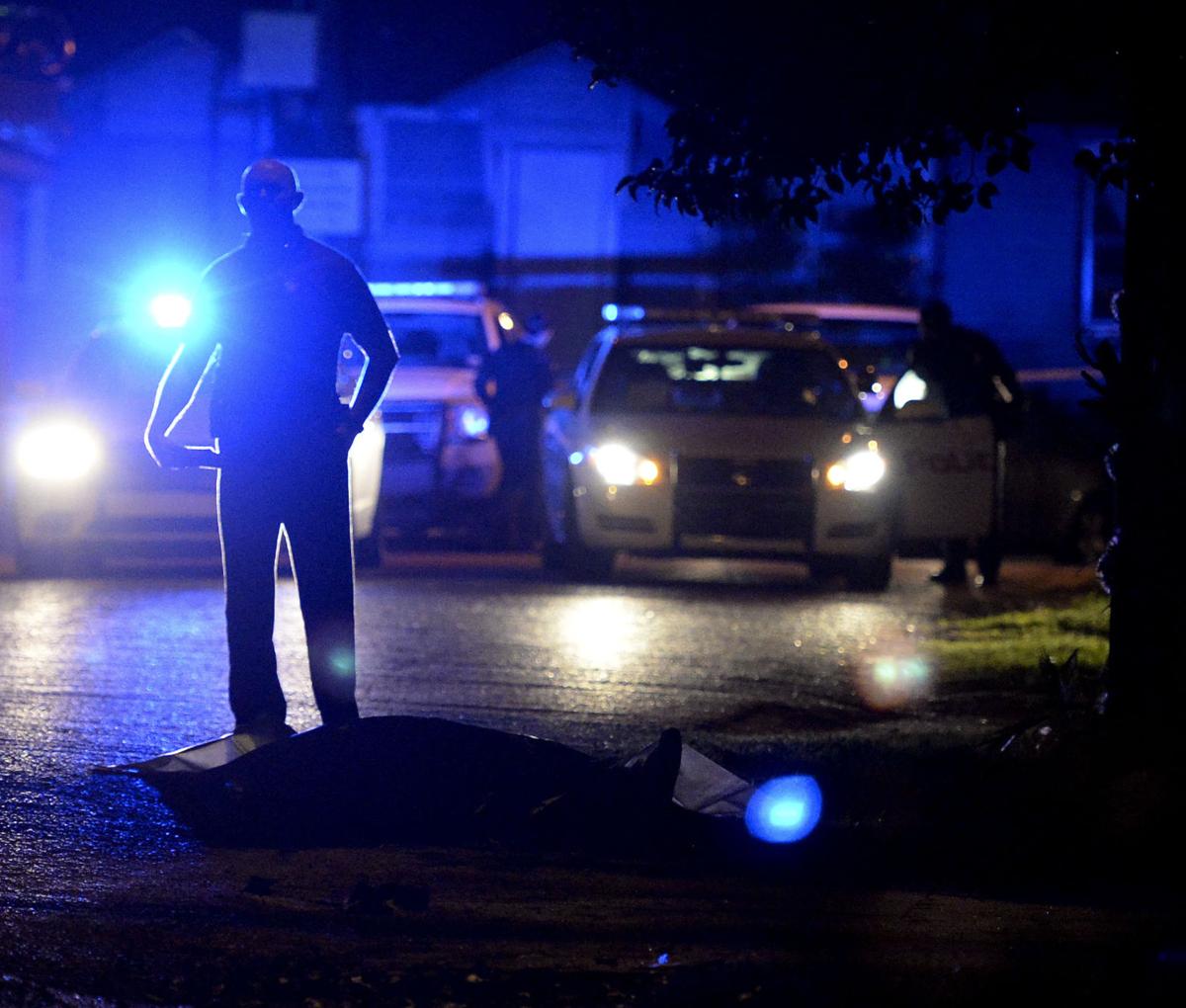 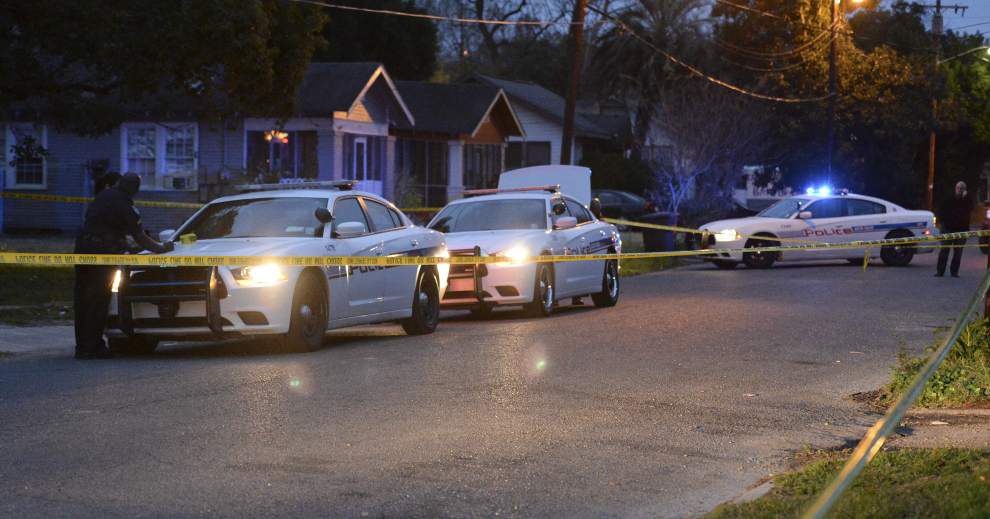 Baton Rouge police work the scene of a homicide where a shooting victim was found on the steps of a house at 1915 Birch Street, Saturday, January 16, 2016, in Baton Rouge.

Baton Rouge police work the scene of a homicide where a shooting victim was found on the steps of a house at 1915 Birch Street, Saturday, January 16, 2016, in Baton Rouge.

The number of killings in East Baton Rouge Parish dropped dramatically in 2016, falling to levels not seen since before Hurricane Katrina.

In a year marked by unrest and catastrophe, the number of those killed in ways neither accidental nor justified declined parishwide by nearly 22 percent — from 78 in 2015 to 61 in 2016.

The biggest drop in homicides was inside city limits, where the number fell from 60 in 2015 to 45 in 2016. The number of homicides remained largely flat in outlying areas of the parish.

In only one other year since 1989 have fewer people been slain within the city. The drop comes even as homicide rates in many cities across the country — including New Orleans — have surged.

The drop in homicides for 2016 resumed a years-long decline in the parish after ticking upward in 2015, a jump law enforcement attributed to a spike of heroin and other drugs in the area.

Law enforcement officials said a combination of factors accounted for the decrease in homicides over the past year in Baton Rouge, including the now 4-year-old Baton Rouge Area Violence Elimination anti-crime initiative.

Police Chief Carl Dabadie Jr. pointed to years of work by his officers and detectives to build better relationships with the community and to a growing rapport with residents in the city's neighborhoods.

"I don't think you can point to one individual thing," Dabadie said. "I think our officers did a lot in the community this year. It was a lot of hard work, and it was consistent work through the year."

Dabadie also said the historic floods that devastated Baton Rouge and much of the capital region — swamping tens of thousands of homes, including those of about a quarter of area officers — may have tamped down violence as residents focused on rescue efforts and came together to rebuild.

Hillar Moore III, the parish district attorney, said a new Crime Strategies Unit launched in 2015 which brings together federal and local prosecutors with National Guard analysts and LSU student interns has helped focus law enforcement efforts on "the people most likely to be trigger pullers" and problematic locations like seedy motels and violence-plagued apartment complexes.

"I think we were able to take off the streets the people that were driving crime and have them incarcerated," said Moore. "I think that had a significant impact."

Of the 61 homicides in the parish in 2016, 16 were outside of the city limits. Fourteen of them were handled by the East Baton Rouge Sheriff's Office while the Zachary and Baker police department both handled one case each.

The overall 22 percent decline in homicides parishwide for 2016 appeared to buck a disturbing national trend of spiking violence in cities confronted by controversial shootings by police officers and subsequent protests, a phenomenon sometimes referred to as the "Ferguson Effect" after the St. Louis suburb rocked by protests after a 2014 police shooting. The killing of a 37-year-old black man named Alton Sterling in a struggle with white Baton Rouge police officers on July 5 touched off days of contentious demonstrations and focused international attention on the city Police Department.

The Sterling shooting, which remains under investigation by the FBI and federal Department of Justice, was just the beginning of a tumultuous and tragic summer for law enforcement. Less than two weeks later, three lawmen — two city police officers and a sheriff's deputy — were murdered on a Sunday morning in an ambush sprung by a lone Missouri gunman.Then came the historic floods that struck the whole region in mid-August.

"It certainly looks like Baton Rouge has not gone the way of Baltimore or Chicago or St. Louis," said Jeff Asher, a New Orleans crime analyst who closely tracks national figures.

Those slain in the parish came from nearly all corners of the parish and all walks of life, including doting fathers, young teenagers and elderly retirees.

Among those killed were a pair of 19-year-old women studying at Southern University, innocent bystanders gunned down in the crossfire after someone else's argument turned deadly.

Violent revenge or greed motivated a number of slayings. In others, the alleged motives were trivial: a man beaten to death in a fight that allegedly began over a pair of shoes; a Baker teenager gunned down in an argument police say was sparked by a party poster; a jail cellmate allegedly strangled over a blanket. Several women were murdered by husbands or ex-boyfriends in shocking fits of domestic rage.

Nearly a quarter of those slain in 2016 died in November, a singularly bloody month that saw a total of 13 homicides in the parish. Guns were used in 87 percent of the crimes.

The majority of the victims, though, continued to fit a disturbing and vexing pattern: Black men between the ages of 17 and 36 made up 44 percent of those slain.

The devastation of the crimes extends far beyond the victims, many of whom suffered terribly in their final, violent moments of life. Their deaths left distraught parents, siblings, friends and lovers whose grief continues long after the funerals.

The slow grind of the court system can take years before convicting killers of their crimes. For many families, legal justice never arrives. Nearly half (47 percent) of homicides in 2016 remain unsolved at year's end.

Among those is the killing of 19-year-old April Netter, who was shot Nov. 30 while sitting in a car on North 47th Street. Police believe she was the unintended target of a gunman's bullet.

"For me, it's still a day-to-day process,” said her mother, Karen Netter. “I still haven't come to terms with it. I haven't processed it yet."

Many days, she said, she stays home, alone in her room. Not only was her daughter, April, her right-hand girl to go to social events, shopping or run errands — but she said she doesn’t want to run into people and have to talk about what happened. A simple trip to the bank is now hard, Netter said.

She said the thing that gets her — that sometimes hurts the most — is the way her daughter was killed. Sometimes she thinks this would be easier if it had been a car accident.

The holidays this year were particularly rough.

"It was a lousy Christmas,” Netter said.

Edward Pratt: After year of tragedy, drop in BR killings could point to better days ahead

There are times when you receive great news, but you don’t know quite what to do with it.

With the death Thursday of a woman who was shot earlier this week by her boyfriend, the number of killings in East Baton Rouge Parish hit a re…