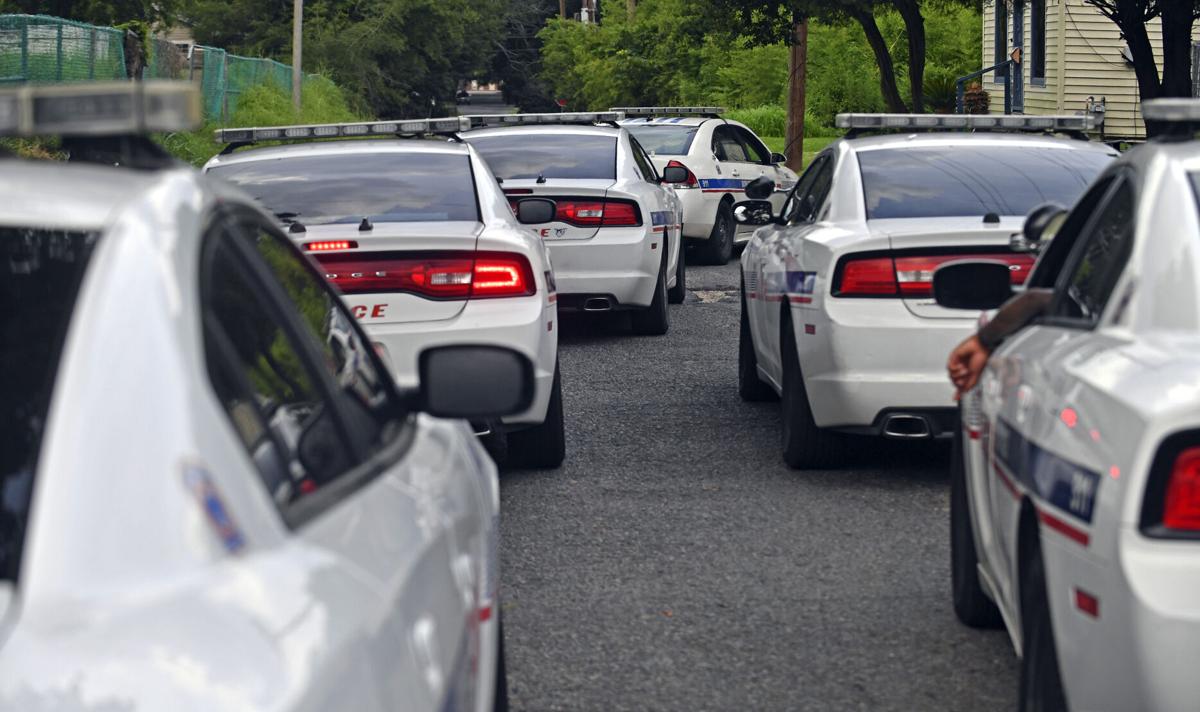 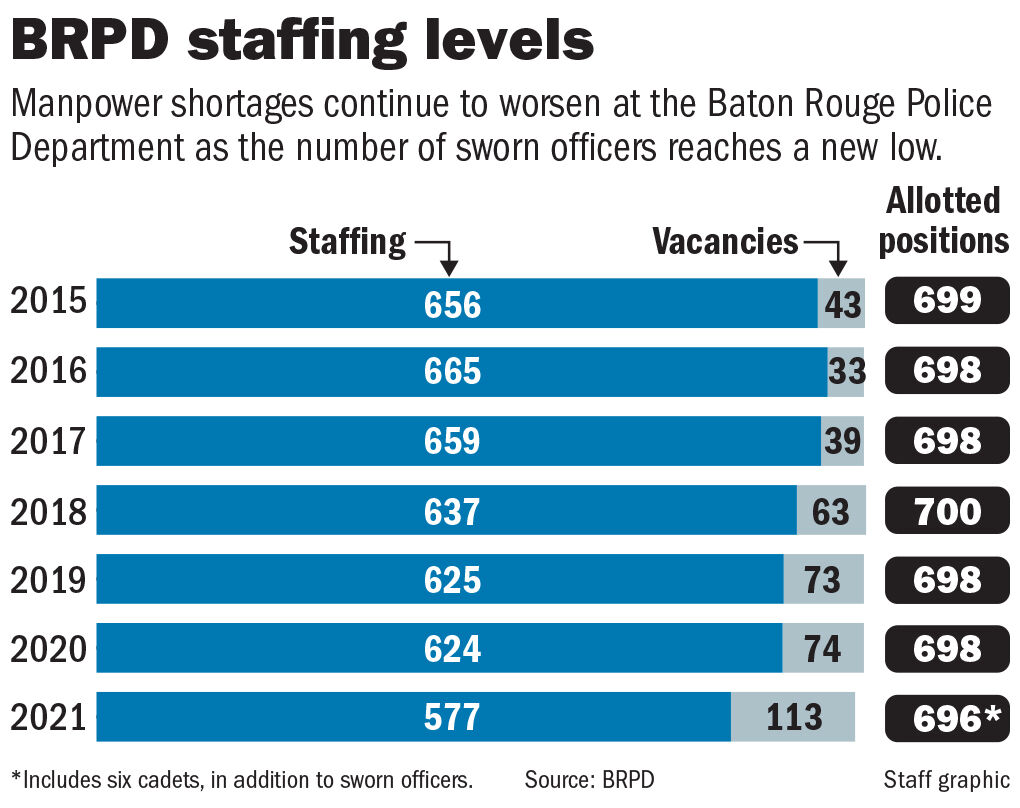 After years of worsening staffing shortages, the number of sworn officers in the Baton Rouge Police Department has fallen to its lowest point since at least 2015.

Meanwhile, amid a surge in gun violence that started last year, the Baton Rouge murder rate is higher than ever.

To cope, the department is eliminating some administrative positions, pulling officers from specialized units and relying more on overtime to meet staffing requirements, particularly in the uniform patrol division — the foundation of the police force whose officers respond to 911 emergencies and other calls for service.

Records show there are 577 sworn BRPD officers — a significant decrease from prior years. That number hovered around 660 from 2015 to 2017, then gradually started declining, according to data provided by the department.

With about 700 allotted officer positions, the agency has grown accustomed to operating with dozens of vacancies. But for the first time over the past several years, the number of vacancies surpassed 100. About 16% of allotted positions are currently unfilled.

Supervisors have been sending out frequent emails requesting officers in other squads to volunteer for overtime and fill persistent vacancies. One recent request asked for four officers in First District, indicating the shift was several cops short.

The Baton Rouge Police Department's longstanding manpower shortage has worsened over the past several months. And a recent decision to further…

While the exact causes of the shortage are difficult to pinpoint, officials said this trend is affecting law enforcement agencies across the country.

"This is not unique to the Baton Rouge Police Department," Chief Murphy Paul said in a recent interview. "We're seeing morale issues in law enforcement as a whole."

He cited the killing of George Floyd in Minneapolis, which sparked widespread racial justice protests and calls to "defund the police" last year.

A recent study by the Police Executive Research Forum, which surveyed almost 200 law enforcement agencies, shows a 45% increase in retirements and an 18% increase in resignations during the 2020-2021 year compared to the 2019-2020 year.

Paul said his department also saw increases in those areas while struggling with recruiting efforts, which have suffered because of the increased scrutiny of law enforcement, coupled with pandemic stress and surging gun violence.

"This is a major problem when it comes to enforcing the law in Baton Rouge," said Siya Creel, former vice president of the Baton Rouge police union, who resigned from the department earlier this year amid a heated disciplinary battle with the chief. "They are practically begging people to work overtime."

After 14-hour civil service hearing ends in 'spirit of compromise,' BRPD union VP gets job back

After months of escalating conflicts between the Baton Rouge police chief and BRPD union leaders, the two parties engaged in yet another publi…

Creel was fired from the department after he did a taped media interview last year, then later won back his job on appeal. The focus of the interview was a billboard campaign criticizing Paul and his administration, including one sign decrying the high homicide rate after shootings started to spike during the pandemic. That trend has accelerated in recent months, leaving the department stretched thinner than ever, Creel said.

"This is everything we tried to warn everybody about," he said. "They need the manpower to solve these homicides. Otherwise, they just have to prioritize cases."

The department has responded to at least 89 murders within city limits and 111 parishwide since the start of 2021, according to records maintained by The Advocate, which tracks intentional and unjustified homicides per federal crime reporting rules. That comes out to nearly three murders a week on average.

On Friday morning alone, city police officers responded to three separate shootings in under two hours. One victim was pronounced dead on arrival, prompting police to launch a homicide investigation, while three more were hospitalized with injuries.

Paul, who took office in early 2018, served about two years before COVID arrived. The pandemic disrupted the court system and local service providers, left people unemployed and desperate for money, and increased risks for domestic abuse victims. The murder rate spiked in 2020, though crime overall decreased — a trend reflected in many other cities nationwide.

Baton Rouge was recently chosen to participate in a White House anti-violence initiative focused on 15 jurisdictions across the country. After traveling to Washington and meeting with the Biden administration this summer, Paul said he was hopeful the program would have real impacts.

Meanwhile, the latest BRPD academy class is getting ready to graduate, which will add 10 new officers to the ranks. Officials had tried for a larger class, but several cadets dropped out during training. Paul declined to provide details about their individual reasons for leaving, though he said the department will not compromise its hiring standards out of desperation for more officers.

"Our need for manpower will have no impact on the standards," he said. "We lose people at every stage of hiring process. That hasn't changed."

The chief hopes to get vacancies back below 100 before the end of the year. He said about 35 recruits are going through the interview process now, and the department plans to start another academy in December.

Baton Rouge is one of the smallest cities in Biden's crime plan. Its homicide rate is among the highest

When President Joe Biden unveiled a new plan to combat violent crime in 15 American cities and counties, including Baton Rouge, he touted the …

But getting enough applicants is an ongoing challenge, officials said — especially because Baton Rouge police officers are significantly underpaid compared to their counterparts at other law enforcement agencies in Louisiana and across the country. A pay study conducted a few years ago found BRPD officers were about 30% underpaid compared to peers in other jurisdictions.

The pandemic also interrupted plans for tackling the salary issue, but local leaders scraped together enough money to give officers two 3% bumps over the past several months. Paul said another, bigger raise remains top priority once the city budget recovers from COVID losses.

In the meantime, recruiting efforts often focus on appealing to potential applicants with a heart for public service and a commitment to protecting the citizens of Baton Rouge.

"People looking for less stress and more pay, they're probably applying to other agencies. Or they get trained up with us, then leave and make more money somewhere else," said department spokesman Sgt. L'Jean McKneely Jr. "That's just the reality of it."

When Baton Rouge police officer Antonio Williams was dispatched to a domestic violence call last month, he arrived on scene first, knocked on …