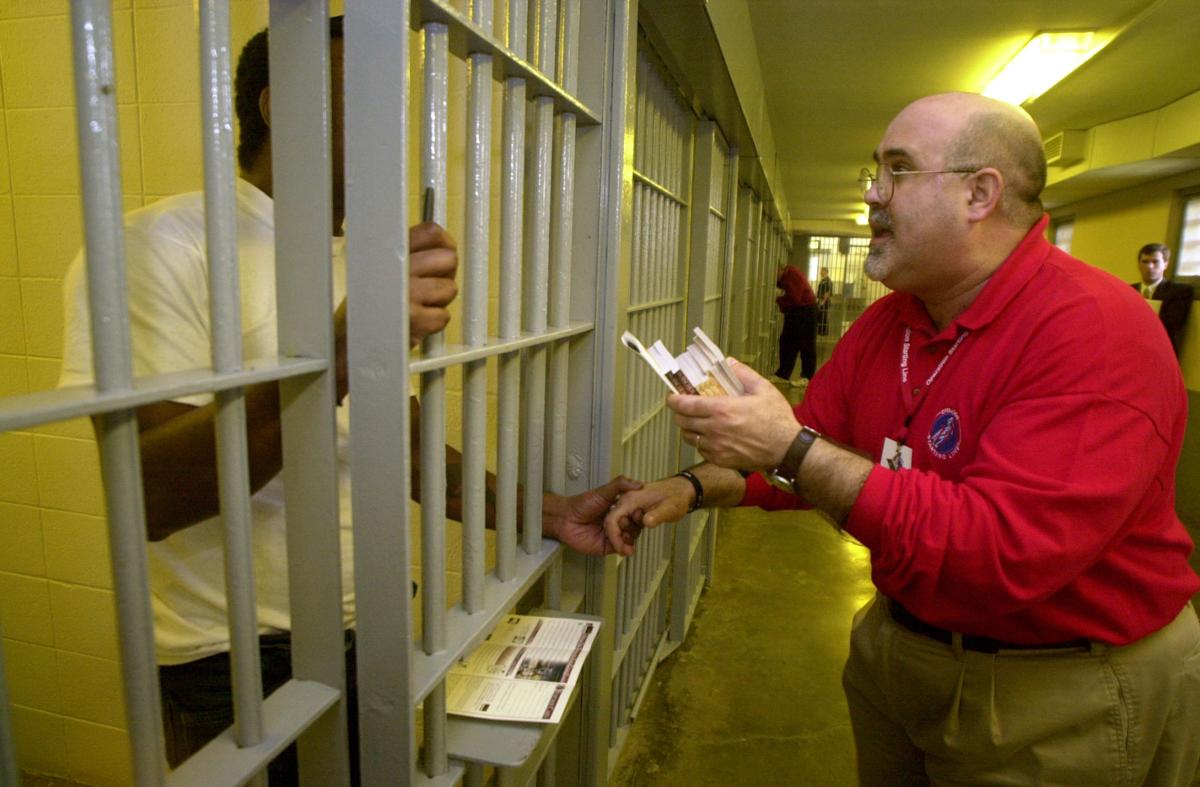 Manny Mill speaks to a level 3 inmate of Camp J at the Louisiana State Prison in Angola about God on Easter during Operation Starting Line in the 2002 image. Operation Starting Line is a national prison outreach program that brings a concert to prisoners and provides spiritual education and post-prison help. Mill, who has served time in prison as well, offered literature about Bible Study Correspondence classes to the inmates who could not attend the concert on the rodeo grounds. 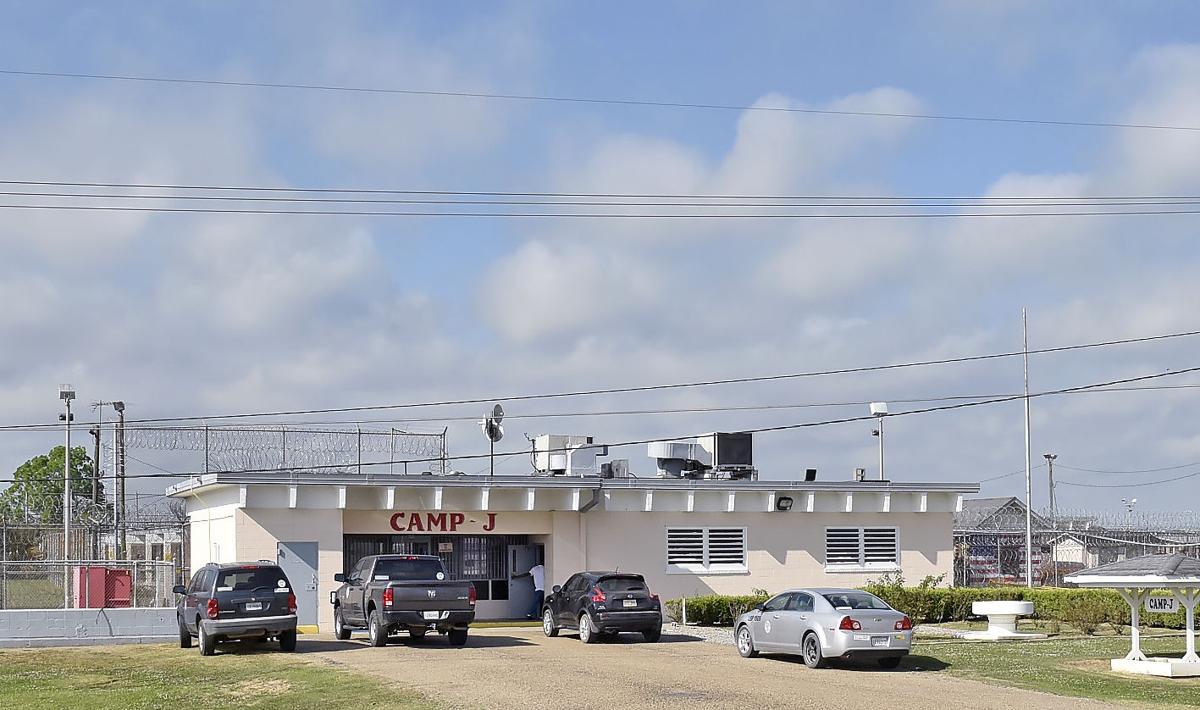 Camp J at Louisiana State Penitentiary at Angola was closed recently due to several safety incidents. 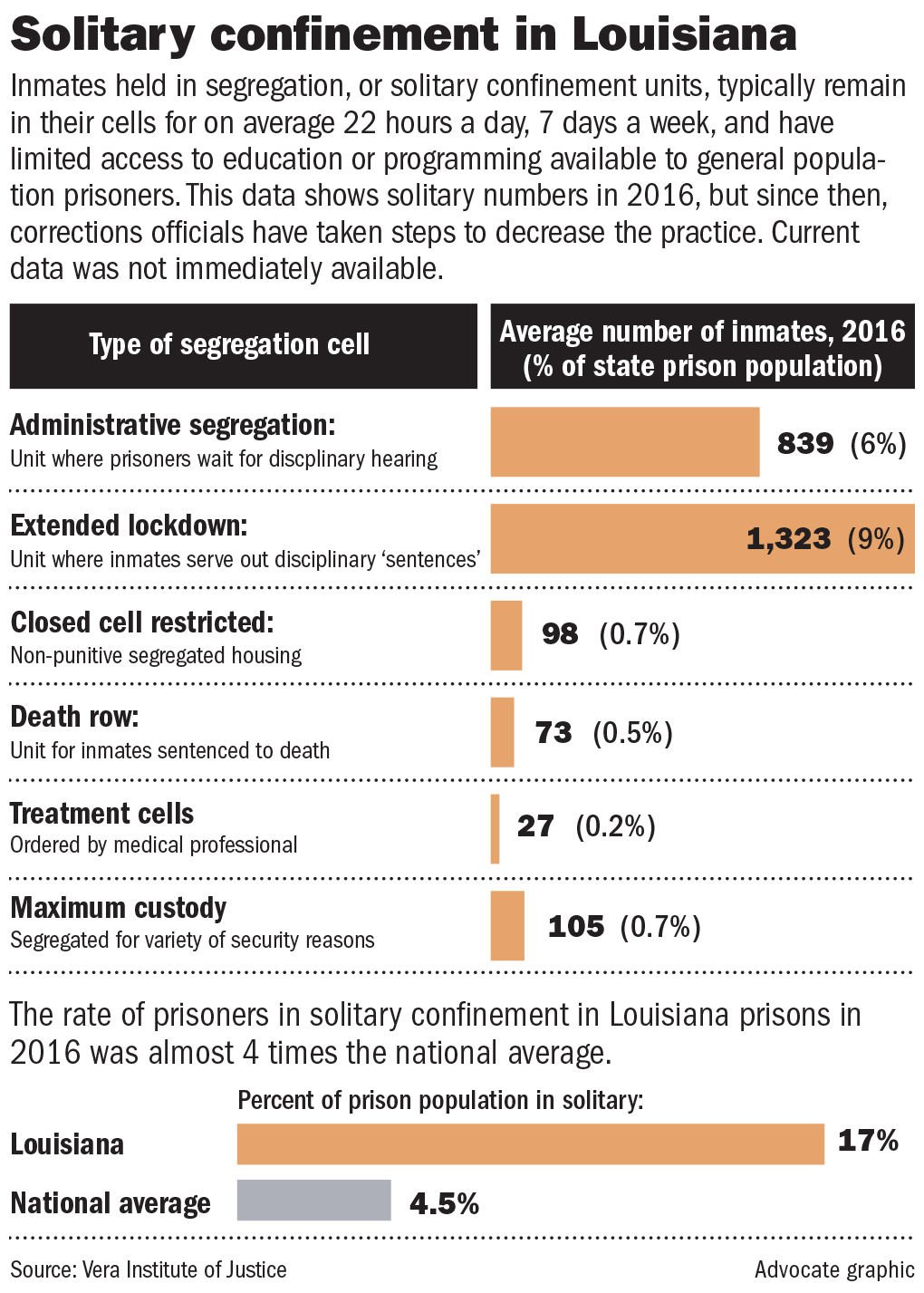 Manny Mill speaks to a level 3 inmate of Camp J at the Louisiana State Prison in Angola about God on Easter during Operation Starting Line in the 2002 image. Operation Starting Line is a national prison outreach program that brings a concert to prisoners and provides spiritual education and post-prison help. Mill, who has served time in prison as well, offered literature about Bible Study Correspondence classes to the inmates who could not attend the concert on the rodeo grounds.

Camp J at Louisiana State Penitentiary at Angola was closed recently due to several safety incidents.

Louisiana state prisons have over-relied on solitary confinement and have been employing troubling and inconsistent practices in recent years, an outcome of the corrections department's vague disciplinary policy that is often disregarded, as well as unfit facilities and a population with rising mental health needs, according to a new report from the Vera Institute for Justice.

The Safe Alternatives to Segregation report released Thursday found that, in 2016, Louisiana confined prisoners in solitary confinement cells at rates almost four times the national average; however, researchers noted that since then, prison officials have taken considerable strides to reducing solitary housing and are committed to building on that progress.

Though current numbers were not immediately available, Department of Corrections Secretary Jimmy LeBlanc said they have reduced the number of prisoners in such restrictive housing units — which he will not call solitary confinement — by almost 1,000 since 2016, about a 40 percent decrease.

"We are making a sincere attempt at improving the prison system …," LeBlanc said Wednesday. "We're proud of what we accomplished … (but) we have a long way to go here and we know that."

LeBlanc also noted that Louisiana, unlike other states, houses about half of its state inmate population in local jails, which were not analyzed for this report. Because of that setup, he said, the most challenging and needy state prisoners are housed in state prisons, driving up their rate of segregated housing. LeBlanc also emphasized that his department made reducing restrictive housing a goal even before their partnership with the Vera Institute of Justice, a criminal justice nonprofit.

The new report is the product of that partnership, and is based on data, observations and focus group interviews from 2015 and 2016. LeBlanc said his team is still reviewing the more than 100-page report, but plans to make changes based on some of the findings and will continue to review the recommendations.

Angola closes its notorious Camp J, 'a microcosm of a lot of things that are wrong'

After more than 40 years as one of the most restrictive housing units within Louisiana’s Angola prison, corrections officials have closed Camp…

“Louisiana should adopt policies to significantly shorten the amount of time people are held in segregation, with the ultimate goal of ensuring that no person is placed in segregation for longer than 15 days in alignment with international standards …," the report says. “Living conditions in these units are characterized by social isolation, idleness, boredom, and sensory deprivation, often for prolonged and indeterminate periods of time."

Research has shown that living in such conditions exacerbate mental health issues as well as contribute to social withdrawal, anger issues, cognitive deficits and lasting psychological trauma, the report says.

In their review of solitary confinement — which Vera researchers defined as any solo housing unit where prisoners were confined for an average of 22 hours a day and provided limited programming — they found segregation was often used as discipline for nonviolent or minor offenses. The report found that in most cases, there was little to no programming for prisoners while in segregated housing, or upon their reentry to the general prison population dormitory, or, in too many cases, for people being released straight into the community from isolation.

In less than six months, one of the most dangerous and dreaded dormitories at Elayn Hunt Correctional Center in St. Gabriel has become one of …

Because of data constraints, researchers noted they were not able to analyze solitary confinement in local jails housing state inmates, or any stays in segregation units that lasted more than two years — which they know occurs but could not say how frequently.

The report, however, also praises Louisiana for the strides made toward addressing some of these issues, most notably the closure of Angola's Camp J, a notorious unit of solitary confinement that was one of the state's largest such units. Corrections officials were also lauded for their transition programs at Elayn Hunt Correctional Center in St. Gabriel and the Louisiana State Penitentiary at Angola that help prisoners readjust to life outside of a cell, and help them be successful in general population. Elayn Hunt has piloted a thus-far successful mentor-based program.

On death row, officials recently began allowing some congregate time for such inmates, including recreation or certain classes. And the state has started testing a new disciplinary policy to reduce the reliance on restrictive housing and make all prisons more consistent in their enforcement and implementation.

Department of Corrections Chief of Operations Seth Smith said they have also increased programming opportunities for those housed in segregation cells, with inmates even receiving the equivalent of a high school degree while in segregation, something he said had never happened before.

BATON ROUGE, La. (AP) — A Louisiana prison brutally punishes suicidal and mentally ill inmates by isolating them for months or even years, cha…

But the report also reveals some troubling practices surrounding restrictive housing in Louisiana's prisons. At seven state prisons, hundreds of prisoners were placed in segregation after an alleged rule violation and stayed there for weeks or even months after they were found not guilty of the infraction, the report found. At David Wade Correctional Center near Homer, inmates found not guilty of their alleged violation remained in segregation, or extended lockdown, for 115 days on average, by far the worst.

The report also details two concerning practices employed only at David Wade that have been used to further discipline inmates already in solitary housing. Disciplinary detention/isolation (DD/I), which the report calls "segregation within segregation" and "among the most restrictive and isolating forms of segregation in Louisiana," takes away inmates' bed sheets and mattresses during daytime hours and keeps them isolated for more than 23 hours a day.

"People are prohibited from lying down on their concrete beds during ‘working hours’ and must sit up," the report says."This form of punishment is excessively severe and likely exacerbates psychological states and behaviors that it was created to deter, such as verbal combativeness, spitting and throwing bodily fluids or feces at staff."

Researchers could not determine how often DD/I was used because they did not track it in their data system; however, they noted the mattresses outside cells during visits, indicating the punishment was going on.

The other form of this harsh practice, called "strip-cell status," takes away a prisoner's clothes and any personal property besides a paper gown, toilet paper and a mattress, though the report notes the mattress could be taken away as a further sanction.

The Department of Corrections and David Wade Correctional Center officials are currently facing a federal class-action lawsuit from inmates in the prison's lockdown units, which further details problematic conditions in the segregated housing wings, calling them unconstitutional and particularly detrimental prisoners' mental health.

Smith said their administration is looking into these practices; he was unsure if they are still going on.

At first, the roughly 1,000 women held at Louisiana's prison for women in St. Gabriel when it flooded in 2016 were told they'd be temporarily …

And while LeBlanc hopes they can continue to make changes, he said finances remain an issue for the corrections department.

“It’s not necessarily within our power to do it if we don’t have additional resources," LeBlanc said, explaining that many of these changes require more staff, more training and facility updates.

But David Cloud, one of the lead researchers from Vera on the study, said he believes the Department of Corrections can continue to move forward, with the right approach.

“This is a big problem that is rooted in Louisiana’s larger framework of mass incarceration and it's going to take a lot of tenacity and commitment and candor to fix," Cloud said. He said their findings show there needs to be a "shift in what we’re trying to accomplish here: foster healing and humanity rather than deprivation or retribution."

Editors note: This story has been updated to include a reference to the pending federal lawsuit over conditions at David Wade Correctional Center.