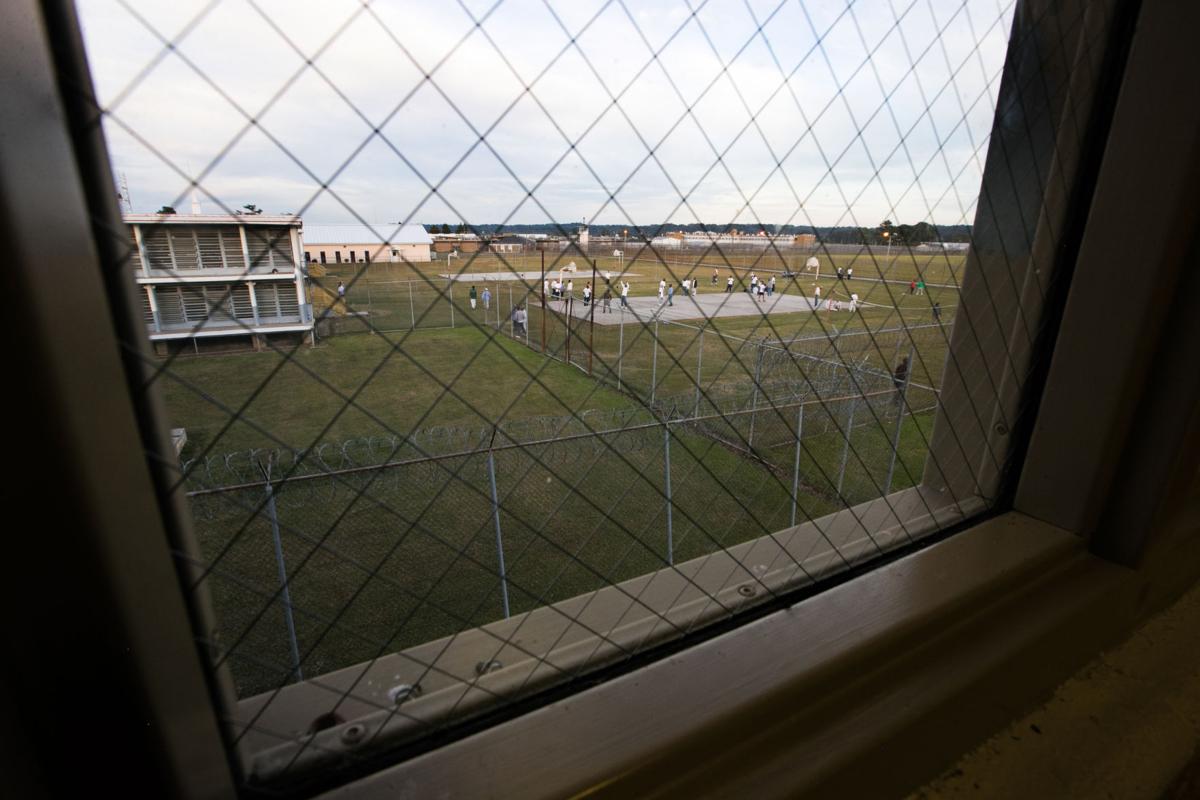 Inmates at the Louisiana State Penitentiary, also known as Angola, participate in a class called Malachi Dads, Tuesday, October 25, 2016, a prison parenting class to help men become positive influences in their children's lives while they are incarcerated and after they're released. (Photo by Ted Jackson, NOLA.com | The Times-Picayune) ORG XMIT: NOLA2015061614435814 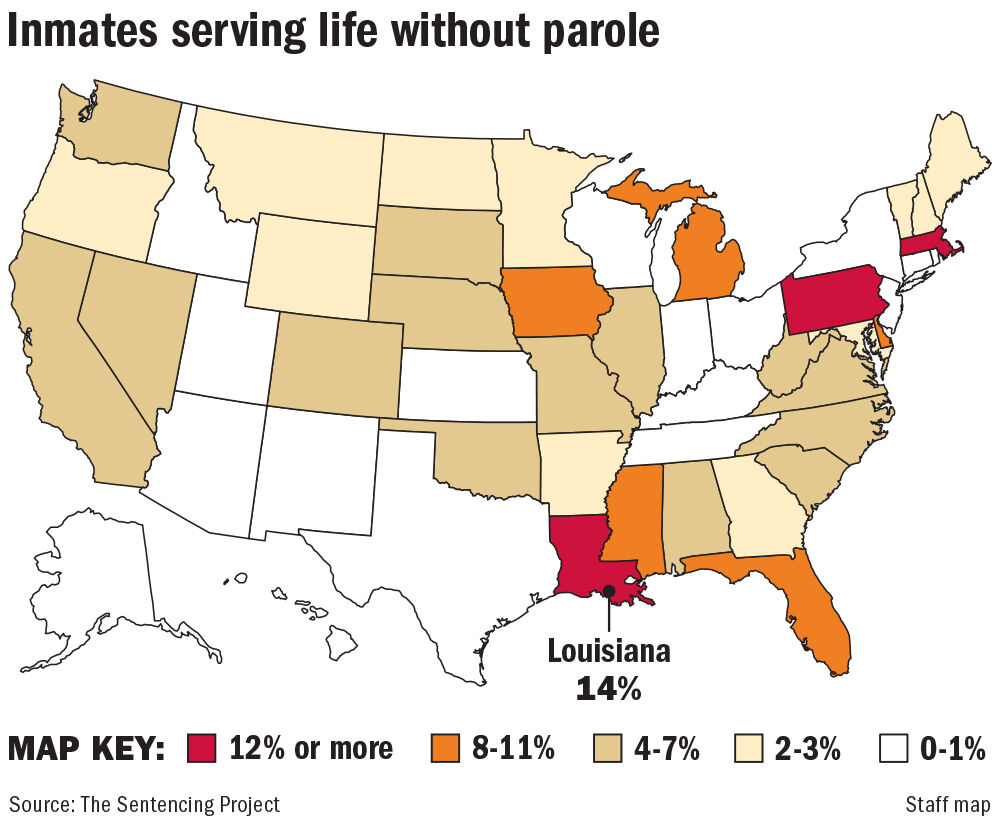 Louisiana sentences people to life without parole at the highest rate in the nation, with 14 percent of the state prison population condemned to die behind bars. 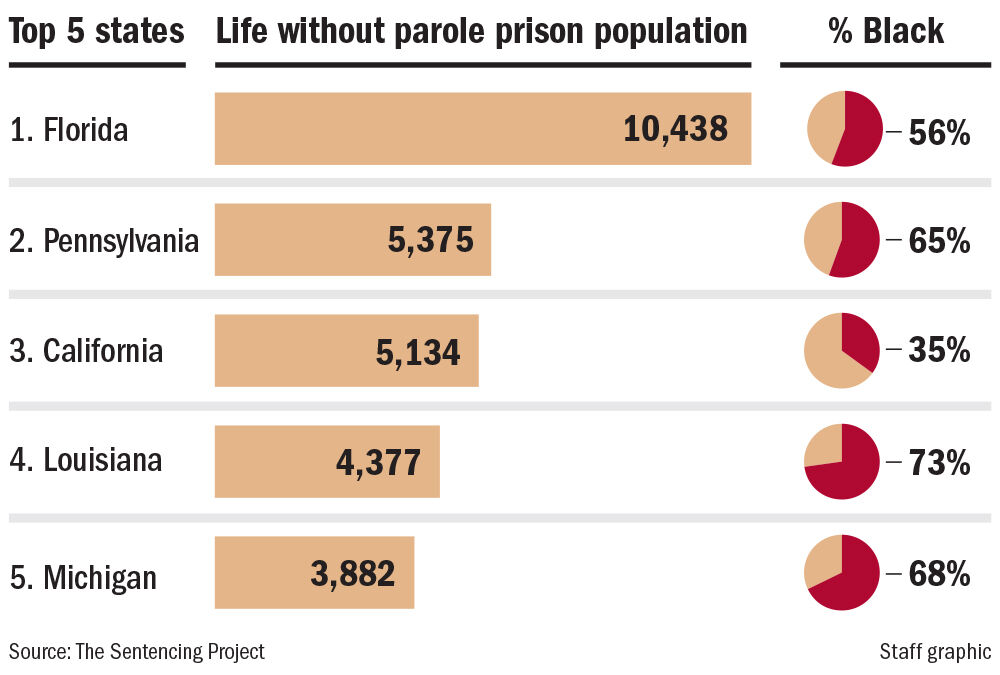 States with the most life without parole inmates: Just five states are responsible for over half the total number of Americans serving life without parole. Of those five states, Louisiana has the highest percentage of Black people serving such sentences, which disproportionately impact communities of color.

When a series of bipartisan criminal justice reforms became law in 2017, state lawmakers achieved their goal of reducing the prison population as Louisiana sought to shed the title of incarceration capital of America.

That title still applies, as Louisiana retained the highest incarceration rate of all states. But the reduction was substantial enough to shift the composition of the state prison population, making long sentences — including life without parole, the longest of all — more common among Louisiana prisoners.

The Louisiana criminal justice system imposes life without parole sentences at the highest rate in the nation, according to a report released Wednesday from The Sentencing Project, a national nonprofit that collected data from corrections agencies in all 50 states. About 14 percent of the Louisiana prison population is serving life without parole — almost 4,400 people.

Researchers found roughly the same percentage in Massachusetts, where the overall incarceration rate is much lower and the total prison population is about one quarter the size of Louisiana's.

Meanwhile, over half the nationwide total is concentrated in just five states: Florida, Pennsylvania, California, Louisiana and Michigan.

Of those five states, Louisiana shows the highest impact on communities of color. Almost three-quarters of the 4,400 Louisianans serving life without parole are Black, a percentage higher than all other states except Georgia. Just 32 percent of Louisianans are African American, according to the latest census.

Despite a downward trend in the overall Louisiana prison population, the percentage of people serving life without parole has increased since 2016. That's largely because the 2017 reforms focused on softening sentences and increasing parole opportunities for people convicted of minor nonviolent offenses, but stopped short of making lifers eligible for supervised release.

Lawmakers considered changes that would have expanded parole opportunities even for people convicted of murder and other serious violent crimes. But the state District Attorney's Association expressed opposition, arguing that such reforms would retraumatize crime victims and their families. Many victims feel that a true life sentence offers a higher degree of closure, the reassurance that a violent criminal will never get the chance to inflict more harm.

Louisiana leaders are not alone in considering the question of how far to go with criminal justice reform. A famously divided U.S. Congress passed the bipartisan First Step Act in 2018, which similarly focused on nonviolent drug offenses.

However, some argue change is especially urgent for Louisiana, which has more inmates serving life without parole than Alabama, Arkansas, Mississippi and Tennessee combined, according to the new report.

Many places, including Southern states, make most lifers eligible for parole after 20 or 30 years. But "life means life" in Louisiana, where the legislature voted decades ago to eliminate parole for all lifers.

That was in 1979, when state lawmakers responded to an earlier U.S. Supreme Court ruling that abolished the death penalty nationwide — an effort to keep former death row inmates behind bars. The death penalty was later reinstated, but the prohibition on parole remains.

Advocates argue that state lawmakers should take life without parole sentences more seriously: "The legal scrutiny bestowed on the death penalty should also encompass sentences so long that they cannot be outlived," researchers wrote.

The Sentencing Project report includes a quote from Perry Stagg, a former longtime Louisiana prison warden and self-described "staunch Republican conservative" who has become an occasional voice for the power of rehabilitation.

"Life without the possibility of parole … does not make sense in most cases," he said. "These are not bad people, but people who did a bad thing, and at some point in their lives they deserve to tell their story. … They deserve hope."

Leaders of the Louisiana Department of Corrections largely agree, but sentencing laws are a legislative issue. The Republican-dominated state legislature has shown little interest in adopting widespread reform.

Experts admit that changing the status quo is challenging, especially when it involves letting violent criminals back into society.

However, elected officials and advocates in Pennsylvania — which ranks third below Louisiana and Massachusetts for its rate of life without parole sentences — have recently launched a campaign to end mandatory life without parole for cases in which the defendant did not intend to hurt or kill someone, but the victim dies during the commission of another felony — for example, an armed robbery in which a co-defendant inadvertently pulls the trigger, or a purse snatching that causes the victim to fall and later die from their injuries.

Pennsylvania and Louisiana are the only two states that impose mandatory life without parole sentences in such cases, giving judges no discretion to determine a fair punishment.

Pennsylvania Lt. Gov. John Fetterman — who serves as chairman of the state pardon board and recently announced a run for U.S. Senate — has become a vocal critic of the practice.

"This is not justice. The penalty does not fit the crime," he said during a Wednesday call with reporters discussing the new report. "I have long held the notion that mercy must be a partner to justice. Every major world religion holds values like mercy and rehabilitation at their core, and our criminal justice system needs to reflect these same values."

Research also shows that most people "age out" of crime, meaning their likelihood of getting rearrested decreases the older they get and the longer they spend behind bars. The Sentencing Project report cites an LSU study showing almost nonexistent rearrest rates among Louisiana lifers who were released after receiving clemency.

Researchers with the Sentencing Project also found that about 30 percent of all lifers nationwide are over age 55, including people sentenced to life with parole and sentences over 50 years. In addition to the exorbitant costs of housing elderly inmates, the coronavirus pandemic presents a serious health risk, the report says.

A series of other recent changes have chipped away at the Louisiana lifer population — including a U.S. Supreme Court decision forbidding life without parole sentences for juveniles except in the most egregious cases, and 2017 legislation that introduced parole eligibility for a small group of lifers convicted and sentenced in the 70s.

Louisiana prisoners who fall into those categories do not receive automatic release. Instead, they are allowed a hearing before the state parole board, which often chooses to keep them behind bars based on various factors, including their prison discipline record and opposition from victims and prosecutors.

Gov. John Bel Edwards has also modestly expanded his use of clemency over the past several months. He commuted 36 prison sentences during 2020, the first year of his second term.

All those efforts have quietly reduced the number of Louisiana lifers, but advocates are pushing for more comprehensive change.

"Extreme punishment has become a hallmark of the American criminal justice system with no evidence that such an approach produces better public safety outcomes," said Ashley Nellis, who authored the new report. "The now-commonplace use of life imprisonment contradicts research on effective public safety strategies, exacerbates already extreme racial injustices in the criminal justice system, and exemplifies the egregious consequences of mass incarceration."

Despite bipartisan efforts in 2017 to reduce the state prison population, Louisiana remains the incarceration capital of America with the most…