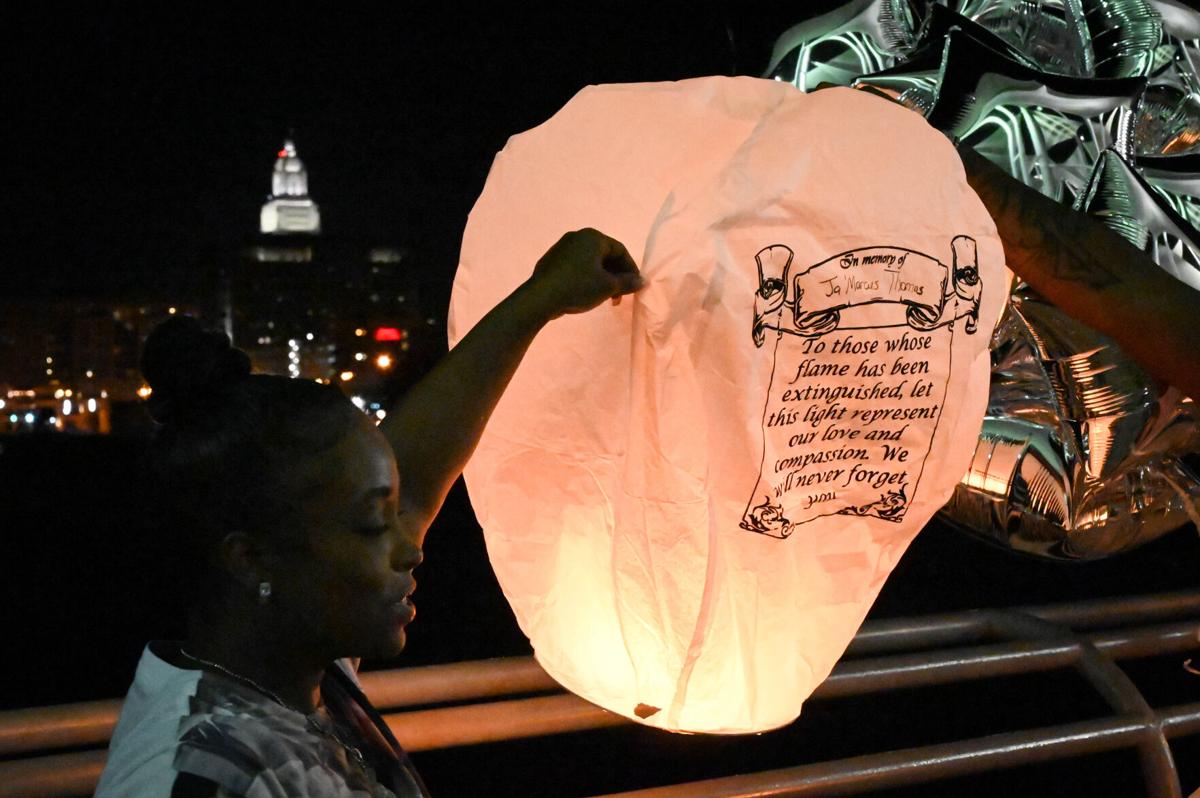 Relatives of the late Ja'Marcus Thomas gathered at the Riverfront on October 15, 2021, to honor his 27th birthday. Jeska and Johnathan Carmouche prepare lanterns to be released. 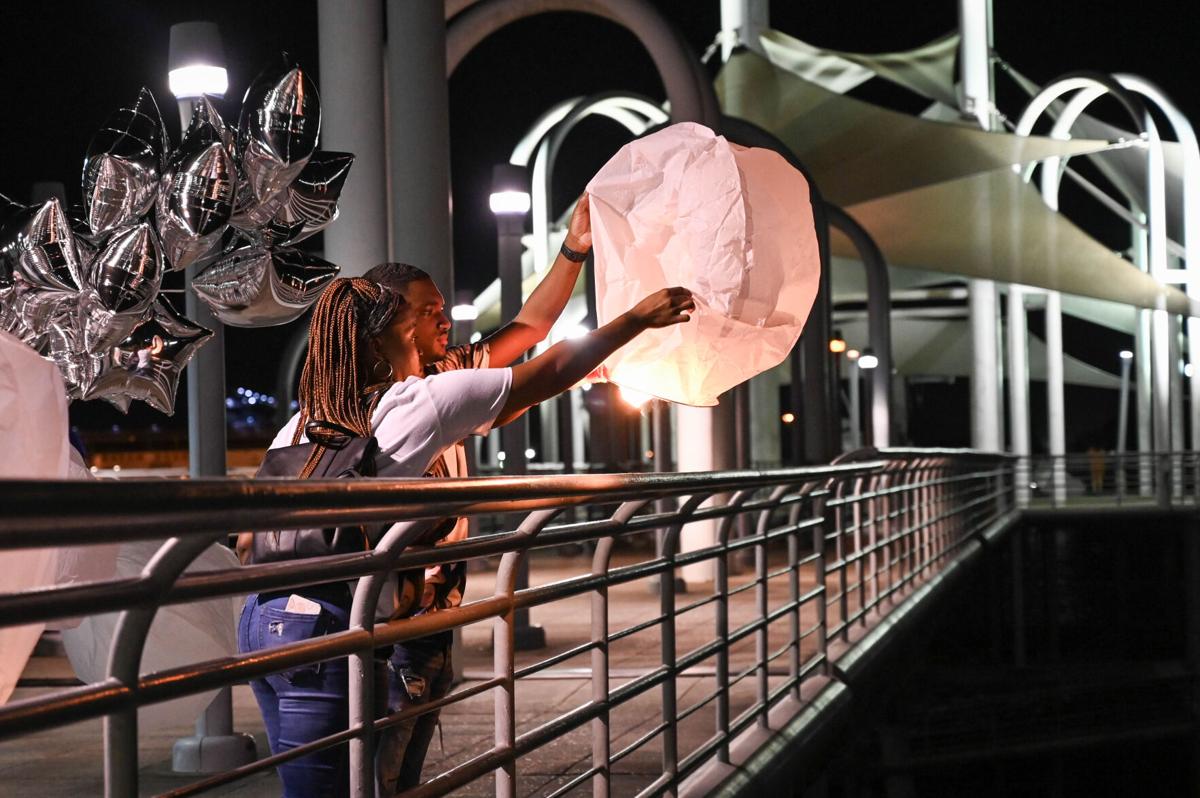 Relatives of the late Ja'Marcus Thomas gathered at the Riverfront on October 15, 2021, to release lanterns in honor of his 27th birthday. J. and Davonte Thomas prepare the lanterns. 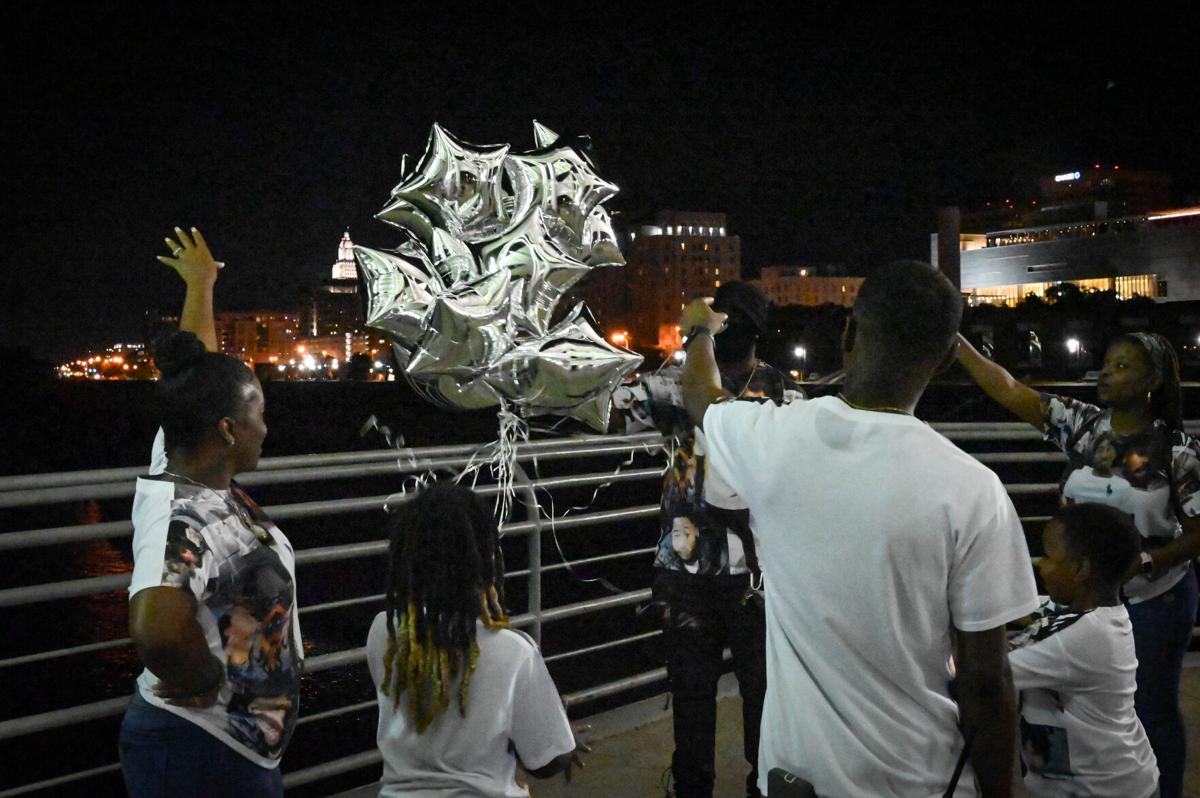 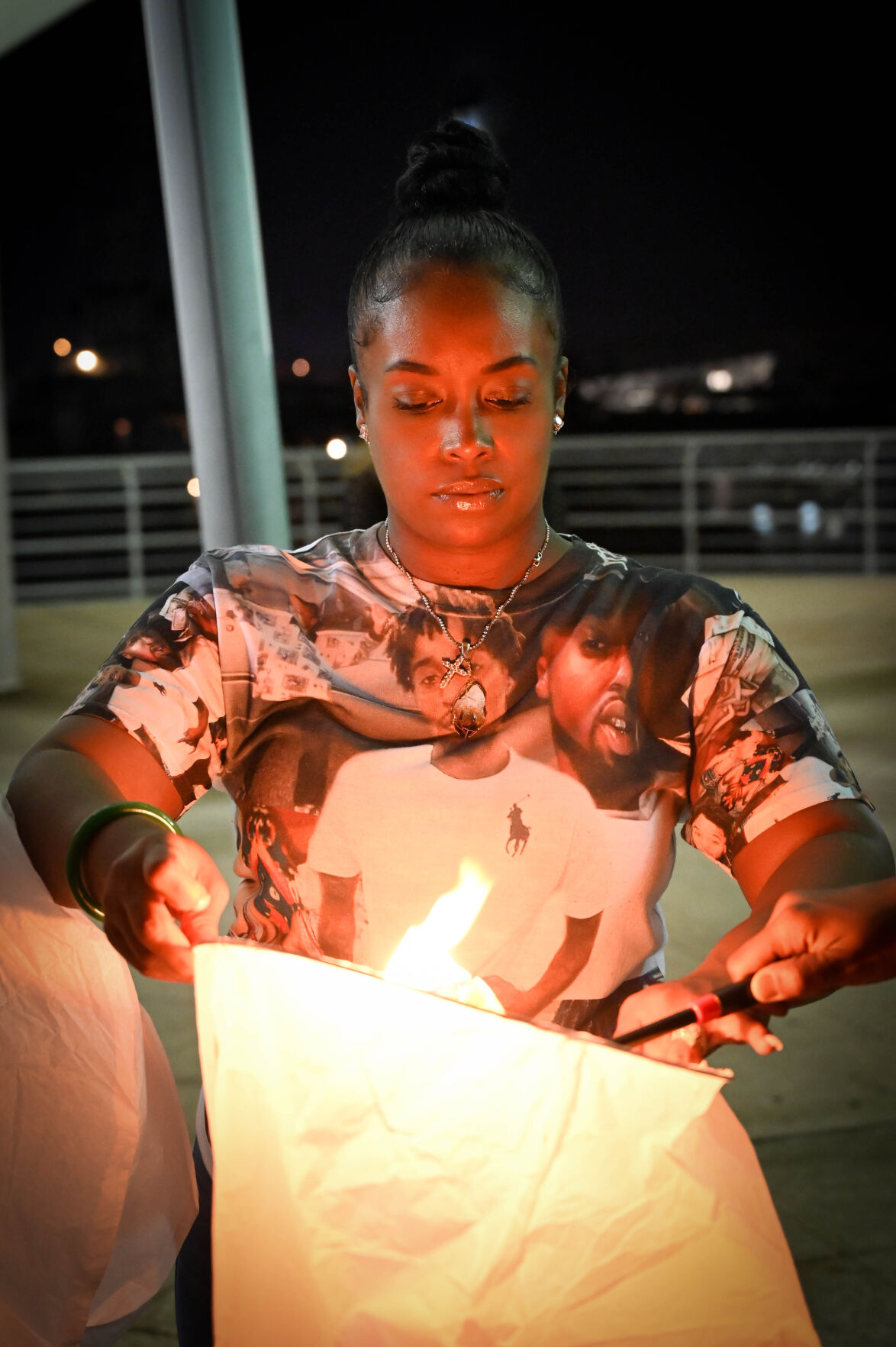 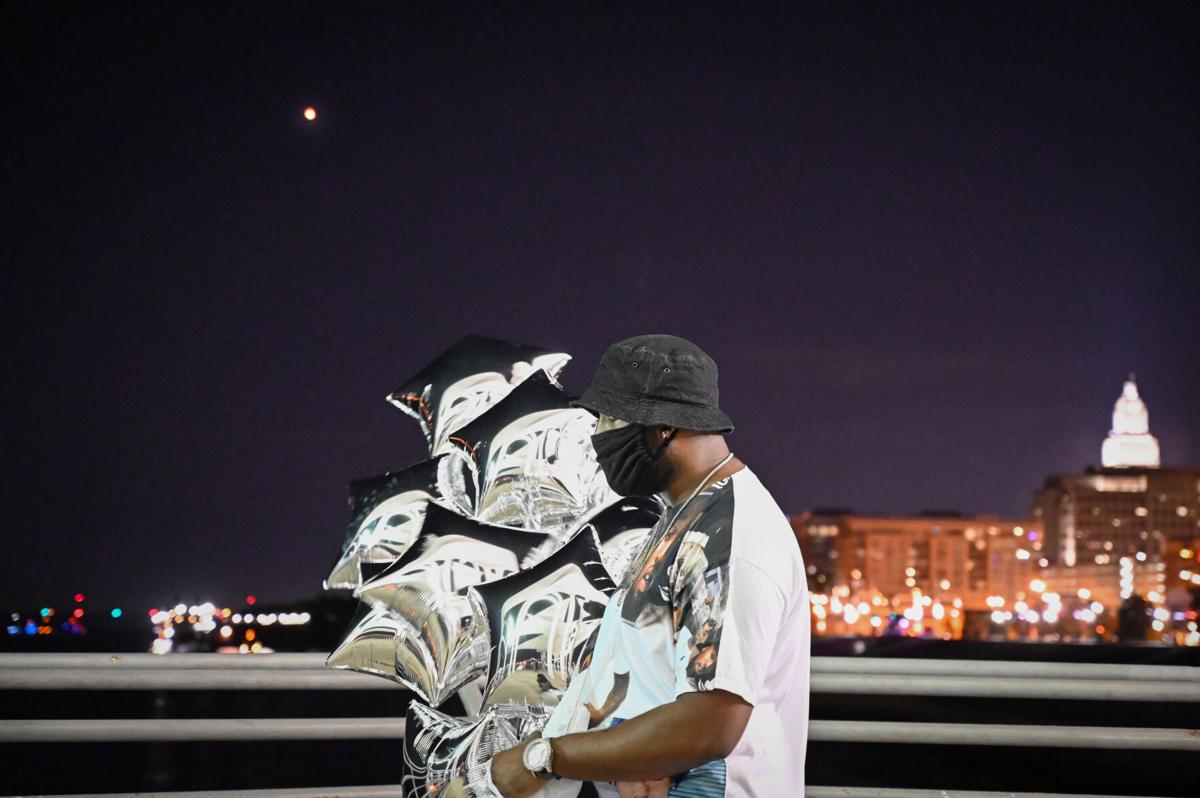 Relatives of the late Ja'Marcus Thomas gathered at the Riverfront on October 15, 2021, to honor his 27th birthday. Johnathan Carmouche prepares balloons to be released. 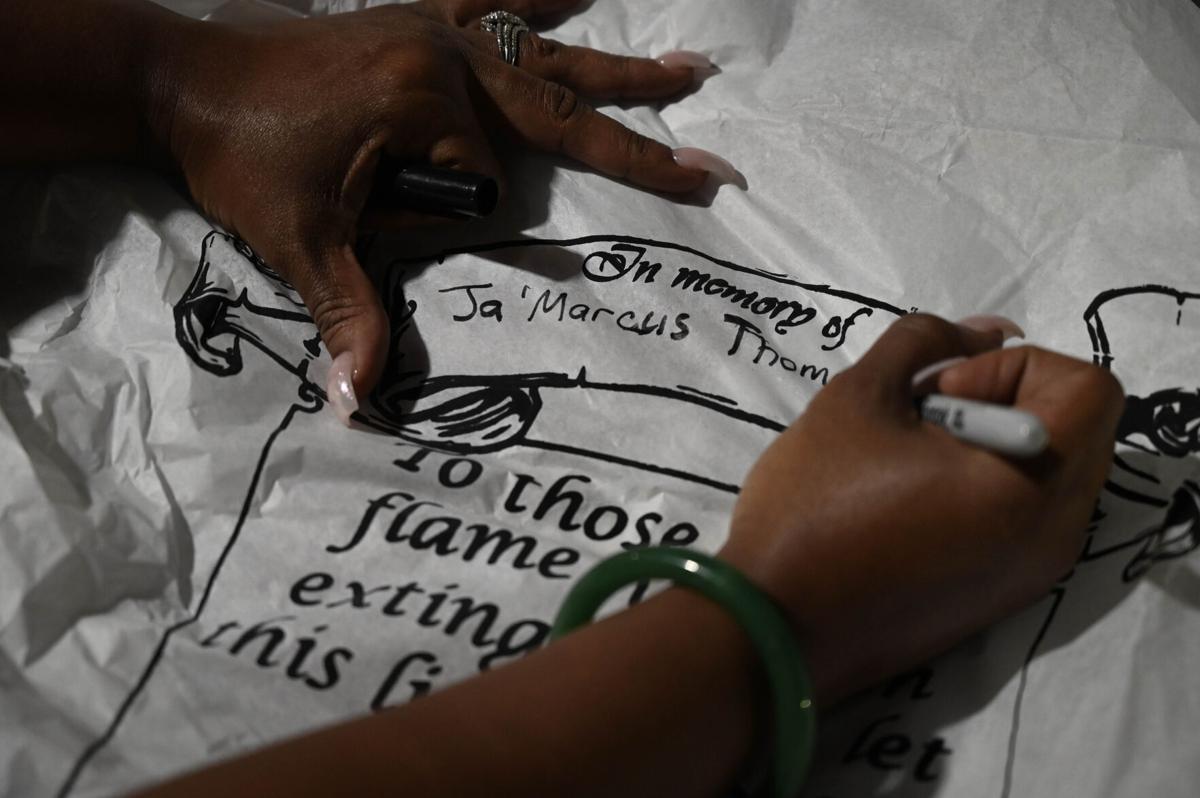 Relatives of the late Ja'Marcus Thomas gathered at the Riverfront on October 15, 2021, to honor his 27th birthday. Jeska and Johnathan Carmouche prepare lanterns to be released.

Relatives of the late Ja'Marcus Thomas gathered at the Riverfront on October 15, 2021, to release lanterns in honor of his 27th birthday. J. and Davonte Thomas prepare the lanterns.

Relatives of the late Ja'Marcus Thomas gathered at the Riverfront on October 15, 2021, to honor his 27th birthday. Johnathan Carmouche prepares balloons to be released.

Jeska Carmouche was asleep when her uncle came into her room in the dark, early morning hours to relay the news: Her brother, the boy she helped raise, was dead.

On July 10, 2020, Ja'Marcus Thomas, 26, was shot and left to die in the front yard of his ex-girlfriend's Sherwood Forest home.

Carmouche says she can hear her uncle's voice to this day.

"They got Ja'Marcus," she recalls him saying.

Her heart races now as it did then.

"I couldn't believe it," she says.

Carmouche rushed to the crime scene, where her brother lay facedown on the ground. She said she saw three wounds where the bullets pierced his body.

More than a year later, the Thomas case is one of scores still unsolved in Baton Rouge.

Murders have skyrocketed in Louisiana's capital since 2020 while the homicide clearance rate has ticked downward.

That trend is reflected across the country but more sharply pronounced in East Baton Rouge.

The parish this week recorded its 119th murder of 2021, surpassing the record high set last year. With more than 100 vacancies among the ranks of sworn officers, the Baton Rouge Police Department, which responds to the vast majority of homicides and nonfatal shootings, is stretched thinner than ever.

Baton Rouge city police, the East Baton Rouge Sheriff's Office and other local law enforcement agencies in the parish have solved about 49% of the 2021 murders so far, according to records maintained by The Advocate. It's a modest dip from preceding years, but a larger departure from the national average, which hovered around 60% before dropping to 54% in 2020.

Thomas Hargrove — a former investigative journalist who founded the nonprofit Murder Accountability Project in 2015 to provide a more accurate accounting of homicides in the U.S. — said declining clearance rates speak to how law enforcement agencies nationwide are overwhelmed.

"They lack sufficient resources to handle the caseload that they're receiving," he said. That's especially true for murders, which are among the most labor intensive cases to solve.

After years of worsening staffing shortages, the number of sworn officers in the Baton Rouge Police Department has fallen to its lowest point …

"It is impossible for homicide detectives to do the necessary work if they're overburdened," Hargrove said.

As a result, according to the Murder Accountability Project, more than 256,000 Americans have died in unsolved homicides since 1980. Clearance rates, meanwhile, have steadily fallen to the point that about a third of homicides in the country go unsolved and 5,000 killers a year get away with murder.

The FBI recommends that departments responding to more than 50 homicides a year should have each detective handling no more than five cases at a time — because higher caseloads can lead to lower clearance rates.

Baton Rouge 'community street teams' aim to stop gun violence: 'you have to be in the trenches.'

Instead of guns and handcuffs, a new team of Baton Rogue residents is relying on a different tool to try and halt the city's high and rapidly …

At the Baton Rouge Police Department, a team of 12 detectives is tasked with solving 94 murders from 2021 alone that occurred within city limits. Since three of those dozen officers are supervisors, that amounts to about 10 per detective — caseloads well above the FBI standard.

He acknowledged the heavy caseloads and emphasized the importance of cooperation from witnesses and other community members to help detectives get the job done.

"It's definitely a challenge," he said. "Our detectives are working hard. They're doing their best. But the act of solving homicides involves various factors, not just police."

Tips from residents are extremely helpful, he said, and are thoroughly investigated.

"A lot happens behind the scenes that the public doesn't necessarily see," he said. "They can't arrest somebody off hearsay, but they absolutely look into everything."

Making exact comparisons between clearance rates becomes difficult because cases often linger into other years before being solved. But Advocate records show the parishwide rate has typically remained above 50% over the past several years.

It reached 60% in 2018, when the parish recorded 83 murders for the year. Even as gun violence surged in 2020, the clearance rate remained relatively high at 58%.

While the Baton Rouge Police Department investigates all murders occurring within city limits, the East Baton Rouge Sheriff's Office responds to cases in the unincorporated areas of the parish. Over the past few years, deputies have investigated between 12 and 20 homicides annually, with very high clearance rates: around 90%.

Cases are considered cleared when an arrest has been made or when a suspect is identified but arrest is impossible, most often because the person has died.

The newspaper calculates simply the percentage of murders solved in a given year. However, law enforcement agencies include in their clearance rate calculations any murders from past years that were solved in the current year, so their totals — which the FBI compiles annually — almost certainly skew higher.

As time goes on without closure, some families of homicide victims say they feel frustrated by what they call a lack of communication on the part of police.

Carmouche said the dearth of updates about her brother's case has only compounded their grief. She said they feel pushed aside, her brother one of hundreds of Black men in the United States whose murders remain unsolved.

To take her mind off the pain, she tried to take matters into her own hands. She began raking through any possible clues, hoping to glean any bit of information to pass along to detectives.

Carmouche said she's submitted several tips to the police. A few months after her brother's death, her family noticed someone was still using his name to file for unemployment. But she didn't hear back from police about whether the tip was relevant to the case.

McKneely said Ja'Marcus' case is far from cold, adding that families of homicide victims are typically directed to the department's victim liaison, a position created within the past few years after a 2017 surge in homicides. But there's only so much police can share about an active investigation.

"Our guys are working these cases to the best of their ability," McKneely said. "We don't disclose every detail we have."

The silence from police can be tough to take.

"It's one thing to still be working on it," Carmouche said. "It's another to have someone reach out to say, 'Hey, we haven't forgotten about y'all.'"

Carmouche often thinks of the last time she saw Ja'Marcus.

After a somewhat turbulent childhood, her brother — who lived with her and her three children since he was 11 years old — finally seemed to be on the right path. He loved his job as a restaurant cook and hoped to one day move out of Baton Rouge.

On that final visit, Carmouche said Ja'marcus talked about wanting to take his 7-year-old nephew to a local amusement park. He also paid back a small sum of money he owed her — something his big sister saw as a sign of newfound maturity.

"He was like, 'You always give me some, I just want to give back to you,'" she recounts.

Others noticed the change, too.

"He looked brighter," Carmouche says. "He looked like he was finally coming to peace with his life."

A few days later, he was gone.

A Baton Rouge man was found stabbed to death in his home at 701 North 36th Street on Saturday, Baton Rouge Police said.