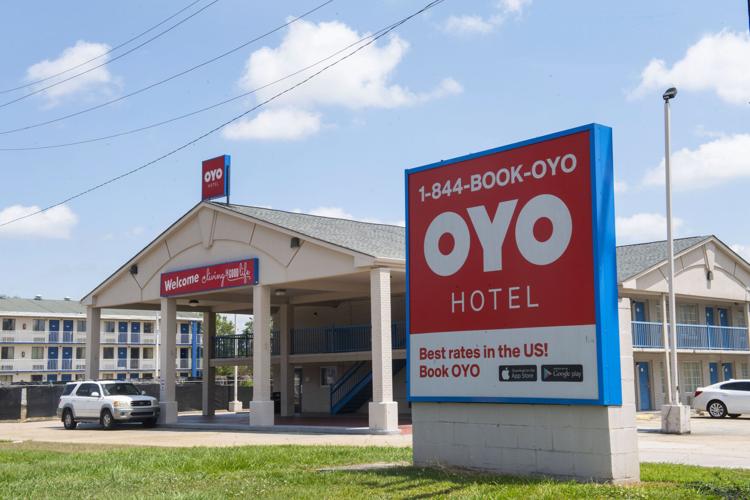 Oyo Hotel Baton Rouge East I-12, at 9999 Gwenadele Ave, seen Thursday, May 19, 2022. This particular OYO location had the most overdose EMS calls of any hotel or motel in the parish since the start of last year. 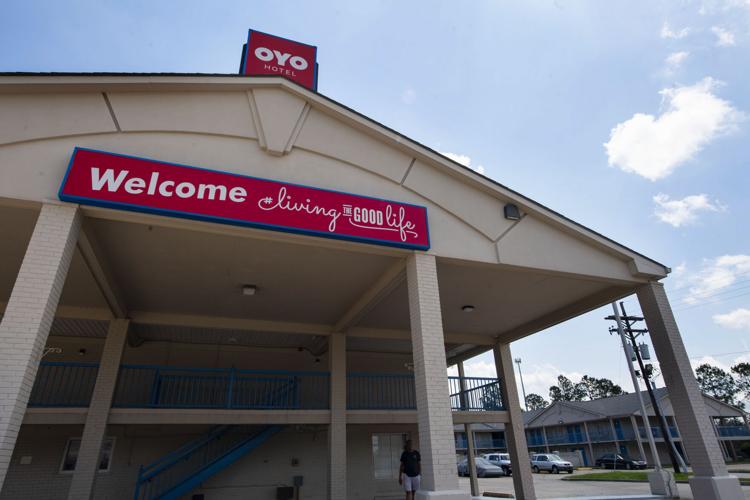 Sign reads 'Welcome, living the Good life,' on Oyo Hotel Baton Rouge East I-12, at 9999 Gwenadele Ave, seen Thursday, May 19, 2022. This particular OYO location had the most overdose EMS calls of any hotel or motel in the parish since the start of last year. 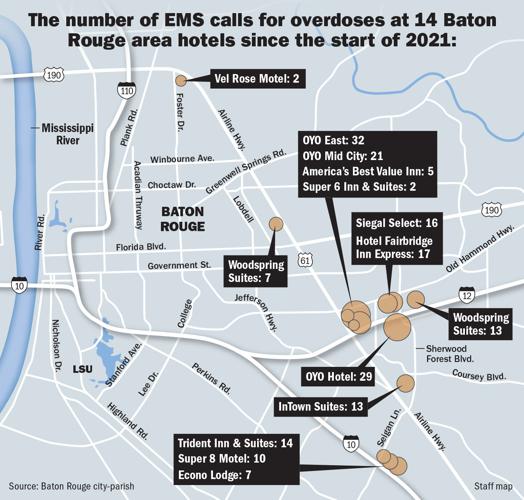 First, Latoya Turner lost her home, then she lost her husband to pancreatic cancer.

Since then, Turner, 43, has juggled gigs at gas stations and fast food restaurants. She has lived off and on at the Hotel FairBridge Inn Express on Boardwalk Avenue since 2021.

With rooms at $40 to $44, it is often all she can afford. But she wishes she could live somewhere — almost anywhere — else.

One room she stayed in at the FairBridge didn't have a toilet, she said; just a hole in the floor. Turner, who is 23 years sober from a heroin addiction, says the hotel and others nearby are “cesspools of drugs and ODs,” strewn with used needles and other drug paraphernalia.

She is living in the epicenter of East Baton Rouge Parish's opioid epidemic.

The core of that deadly surge is a four-mile strip of eight budget hotels along I-12. There have been 135 Emergency Medical Services calls for overdoses at those hotels since the start of 2021, EMS and law enforcement data show.

And that's just the overdoses; at some hotels, 911 has been called hundreds of times a year for various criminal complaints.

Data tracked by the East Baton Rouge District Attorney show 10 of the 11 deadliest places in the parish for overdoses over the last two years are budget motels; the 11th is a hospital.

The five businesses accounted for at least 25 fatal overdoses during that time, according to the District Attorney’s Office. The Hotel FairBridge Inn Express, where Turner stays, accounted for nine of those deaths, the most of any location in the parish.

"These hotels are convenient places for users and for dealers, because, A, rooms are readily available, and B, they’re cheap," said John Daily, who runs the DA's “When You Are Ready” campaign to help steer people toward recovery resources.

Daily, who is in recovery himself, frequents the hotels with other volunteers. He says the help isn’t always welcomed.

"Us going in there and offering them exposure to a different lifestyle is bad for their business," he said.

‘A hotbed of activity’

Turner tries to help drug users at the hotels by getting them clean needles and carrying Narcan, a life-saving medication that can revive people in the throes of an overdose. She said she uses Narcan to revive people multiple times a week, given the prevalence of overdoses at the FairBridge and nearby gas stations.

An hour before speaking with The Advocate on Thursday, Turner said she used Narcan on someone who overdosed in a nearby parking lot before calling them an ambulance.

Since the start of 2021, EMS has responded 188 times to calls about both fatal and non-fatal overdoses at the 14 worst-offending hotels. The hotel with the most overdoses in that period was the OYO Hotel on Gwenadele Avenue, where people overdosed at least 32 times – five of them fatally. The hotel has become emblematic of wider problems after an April fatal shooting there.

Many of the problem hotels are grouped together near a handful of busy intersections just off interstates and highways.

“The 10-12 split has created a hotbed of activity for us … and it’s very concerning,” said Metro Councilwoman Laurie Adams, whose District 11 contains the Gwenadele OYO and several others with high rates of overdoses.

Another hotspot: A cluster of three motels near Siegen Lane and I-10, where EMS has responded to 31 overdoses since the start of 2021.

With so many overdoses happening near these hotels, groups that hand out clean needles and Narcan have set up shop nearby.

Among those is the Capital Area Re-Entry Program, whose mobile unit provides clean syringes, wound care kits, testing for Hepatitis C, HIV and other resources geared toward people who inject drugs. Their mobile unit’s schedule for May and June shows frequent visits to intersections near hotels with high overdose rates.

“We find they’re going to hotels, they’re going to abandoned properties, they’re going to places where they can’t be seen by their loved ones to inject drugs,” said Gjvar Payne, the executive director of the Capital Area Re-Entry Program. “You’re prone to see a lot more people at hotels because I can get me a room and go on a couple-day binge.”

Jan Laughinghouse, the executive director of Capital Area Human Services, said people overdose at hotels for the same reason they do in fast food restaurant bathrooms and in cars.

“It is just an affordable place to be able to indulge in their use,” Laughinghouse said. “Any type of budget hotel where people can afford to go, they can probably panhandle or engage in sex work to get the money to pay for the night…people who use substances are just like the rest of us, they want to be safe and secure.”

Some of the hotels are scenes of crumbling buildings and bug infestations.

“It’s ratchet as hell and it’s not updated,” Turner said about the FairBridge.

Standing in a gas station parking lot next to the motel on Thursday, she rolled up her sleeves to reveal small pock marks on her forearms, which she said were from scabies she caught at the motel.

Despite the Fairbridge’s dilapidated appearance — including a missing second-floor balcony, rooms that are unusable without plumbing and reports of bugs and mites inside — the building’s owner and landlord denies any responsibility for it.

Manan Patel, whose BR-LA REALTY LLC is listed in property tax records as the hotel’s owner, insisted that the responsibility for the upkeep of the property falls to hotel management alone.

“I just have the real estate, it’s not my responsibility,” Patel said.

Messages to the FairBridge’s corporate offices went unanswered, and a desk clerk at the Baton Rouge location told reporters that the manager was unavailable.

Patel's hands-off approach differs from some other hotel owners, who say they are trying to keep their properties safe and well-maintained.

Raj Patel, who owns the OYOs on Gwenadele and Mead, did not return a message seeking comment for this story. But, in an interview last month, he acknowledged the depth of the problems at his Gwenadele property and blamed staff shortages caused by COVID and destructive weather events for his properties’ deterioration.

At the OYO Hotel on Mead Road — the site of 29 overdoses since the beginning of 2021 — a security guard told reporters Thursday that it was his first day being dispatched to watch over the property.

What's being done about it?

Last month’s fatal shooting at the OYO on Gwenadele reignited a push for parish leaders to find ways to force hotel owners to curb crime.

Officials say they are reaching out to hotel owners directly to fix the problems.

“In many cases, the verbal discussions help in many cases much more than the hammer of the law,” said city-parish Chief Administrative Officer Darryl Gissel. “We do have people who just refuse to comply, and that’s when you have to use the hammer.”

The problem, though, is that the parish often does not have much of a hammer to wield.

In 2018, the Metro Council passed a new ordinance requiring hotels and motels apply for permits. The parish could suspend or revoke those permits due to activity that "negatively impacts the health, safety and welfare” of guests or people who live nearby. The parish was supposed to track data like law enforcement calls to support such actions.

But the legislation has never been enforced. No one was made responsible for tracking the data and acting upon it.

Adams, along with Councilman Dwight Hudson, has been working to amend the ordinance to require that hotels annually reapply for permits. They also want to increase the $100 application fee, raising money to pay for tracking and enforcement.

Even if the 2018 ordinance was enforced, it couldn't be used to clamp down on motels with high rates of overdoses because it sets a benchmark of at least five felony arrests, something that rarely happens in the case of an overdose.

Adams said she would like to amend the ordinance in a way that would curb drug use on the properties. That could come in the form of annual inspections so the city-parish can see when a motel is falling into disarray and take action by revoking their permit.

Besides the 2018 ordinance, some state laws allow crackdowns on businesses or dwellings that emerge as crime hotbeds. East Baton Rouge District Attorney Hillar Moore invoked a statute allowing law enforcement to declare buildings nuisances, for example, in the case of two apartment complexes in the Tigerland area where multiple people were killed in recent years.

Moore has been the only official to invoke that law in recent years, but he said that a handful of law enforcement officials have the authority to do so: The attorney general, sheriff, police chief, parish attorney and mayor’s office.

Despite the wave of overdoses, thefts, and a handful of homicides at city-parish motels, law enforcement officials say they can't apply the nuisance ordinance on them. Moore said that’s because the statute only applies to specific crimes.

“That statute has been around for years,” Moore said. “It is very old and is probably not up to date with the kinds of crimes we see today.”