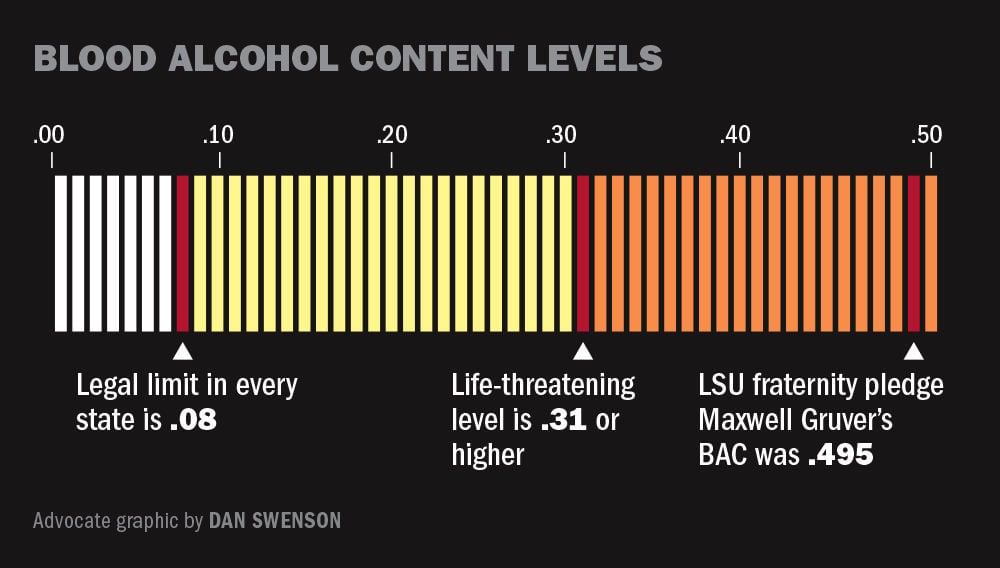 Less than a month after starting college, LSU freshman Maxwell Gruver spent the last hours of his life unconscious on a fraternity house couch — his breathing likely becoming slower and shallower, medical experts said, and ultimately stopping entirely after vomit entered his lungs.

Gruver probably slipped out of consciousness and died without pain or awareness of his physical state, as if under anesthesia, experts said.

He died of acute alcohol intoxication with aspiration and his blood alcohol content registered as .495, the East Baton Rouge Parish Coroner's office determined. He had spent the night drinking during an event with members of Phi Delta Theta, the fraternity he was pledging.

LSU Police said fraternity members hazed the pledges and forced them to drink while playing a drinking game. Ten men, including eight current students, face misdemeanor hazing counts, while one was also booked with negligent homicide.

East Baton Rouge Coroner Beau Clark said he had never seen a blood alcohol level like Gruver's under similar circumstances. That kind of alcohol amount is usually only seen in the deaths of older adults with a history of alcoholism, Clark said, not a teenager whose body was not accustomed to the consumption of large amounts of liquor.

Dr. Scott Edwards, an assistant professor of physiology at LSU Health Sciences Center whose research has focused on alcohol and drug abuse, said he was “definitely shocked” by the number, which he described as “one of the highest I’ve ever seen.”

“That level is off the charts ... not what someone would ever voluntarily drink,” Edwards said. “This was certainly not a typical college party (but) really a specific case of this group of individuals not being educated that you can die — that there is a level (of alcohol consumption) that is lethal.”

Fraternity members allegedly forced Gruver and other pledges to drink 190 proof alcohol called Diesel — almost 2.5 times more potent than standard 80 proof — when they made mistakes reciting the Greek alphabet, the police reports say. The website for Diesel 190 Proof notes that it "is extremely potent and should not be drunk straight but integrated with drinks in a small amount."

One of the reports estimates Gruver drank 10 to 12 pulls of liquor within about two hours, while most other pledges drank three or four. Pledges told police they believe some current fraternity members targeted Gruver for repeatedly arriving late to fraternity events. Gruver was pronounced dead the following morning after he was taken to the hospital.

Alcohol affects the brain from the top down, first shutting off the least essential aspects of bodily function, such as feelings of anxiety or discomfort and later affecting balance and motor coordination, experts say. If enough alcohol is consumed, the brain becomes unable to power even vital reflexes, which ultimately causes breathing to cease.

Clark said Gruver died after vomit entered his lungs, preventing him from breathing. A high blood alcohol level such as Gruver’s causes the entire body to slow down, hindering proper reaction to “secretions such as vomit,” he said.

Dr. Aaron White with the National Institute on Alcohol Abuse and Alcoholism also said the facts of Gruver’s autopsy suggest he “drowned in his vomit” after losing his gag reflex, allowing fluid to flow directly into his airway and essentially suffocate him.

In addition to the sheer quantity of alcohol ingested, experts said drinking fast exacerbates the effects of drinking liquor, especially for a young person with a relatively low tolerance.

Witnesses told police that Gruver appeared highly intoxicated by midnight and was left on a couch to sleep. But the next morning, several members checked his pulse, discovered it was weak and couldn't tell if he was breathing. They then took him to the hospital, police reports say.

“A lot of college students think that if someone has a lot to drink and passes out, they’ll be fine just sleeping it off,” Edwards said. “But in this case, it was much more severe and (with) much more prolonged effects.”

In case of LSU fraternity pledge Maxwell Gruver, what are max sentences for hazing, negligent homicide?

Ten men wanted on arrest warrants in connection with the death of 18-year-old Maxwell Gruver, a pledge at Phi Delta Theta fraternity, have tur…

Hudson Kirkpatrick, 19, one of 10 men arrested in the hazing death of LSU fraternity pledge Maxwell Gruver, was released on bond Thursday.

LSU's Lambda Chi Alpha fraternity shut down because chapter was 'unsafe,' board says

Another LSU fraternity has been shut down, this time in a move prompted by national fraternity leaders who deemed the chapter "unsafe."