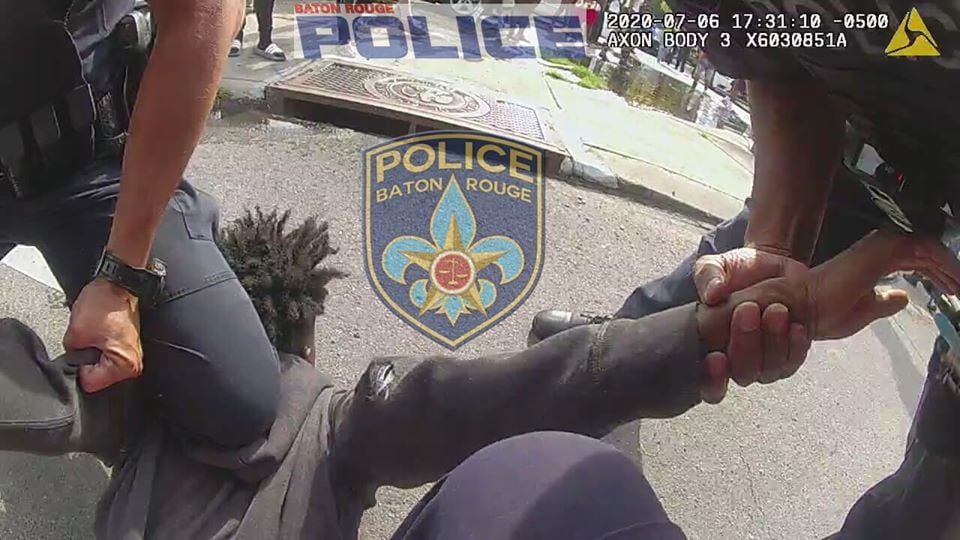 Baton Rouge police released this video screenshot of an officer placing a knee on a teenager. Baton Rouge Police Chief Murphy Paul said the knee was placed on his back, which is an approved tactic at the department. 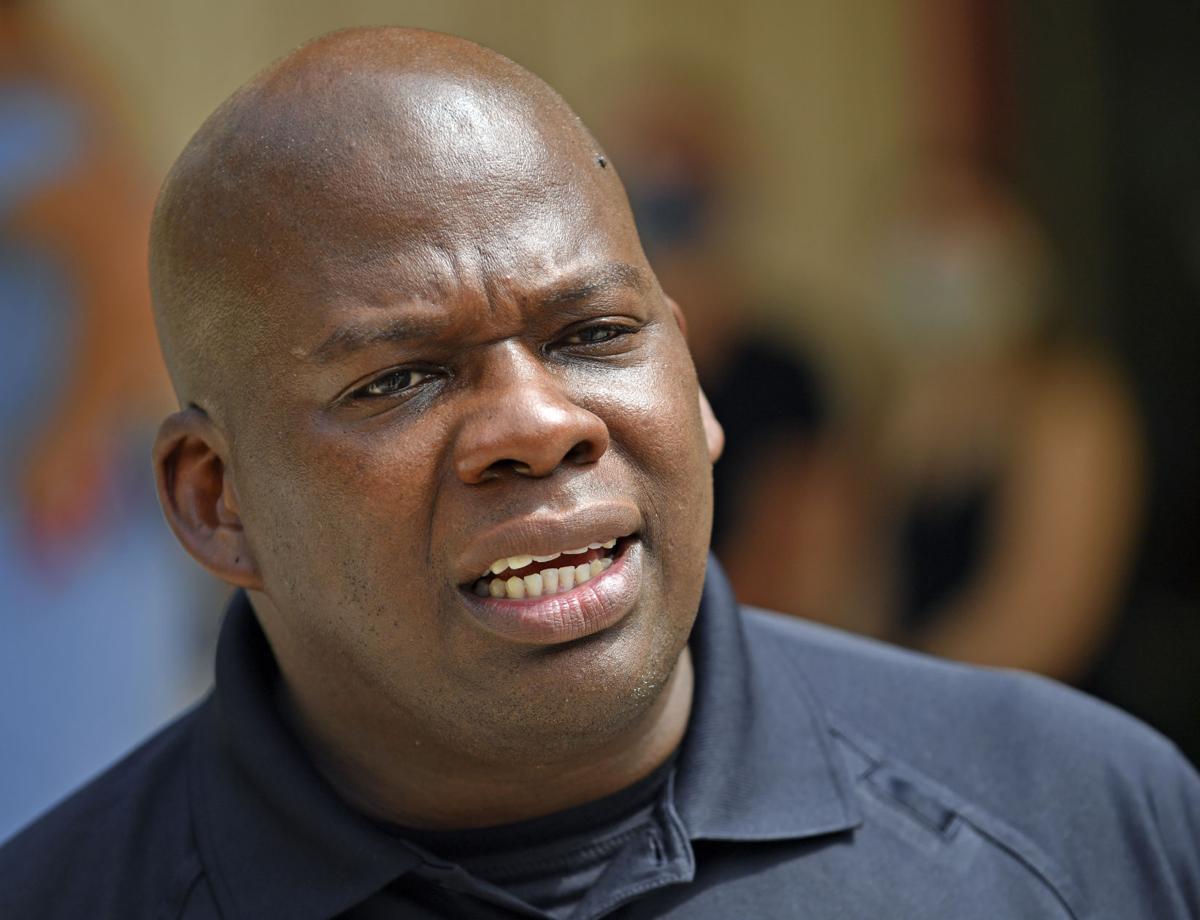 Baton Rouge Police Chief Murphy Paul offers comments before the start of a prayer vigil, Saturday, May 30, 2020 at the Elevate Church in Baton Rouge, La. 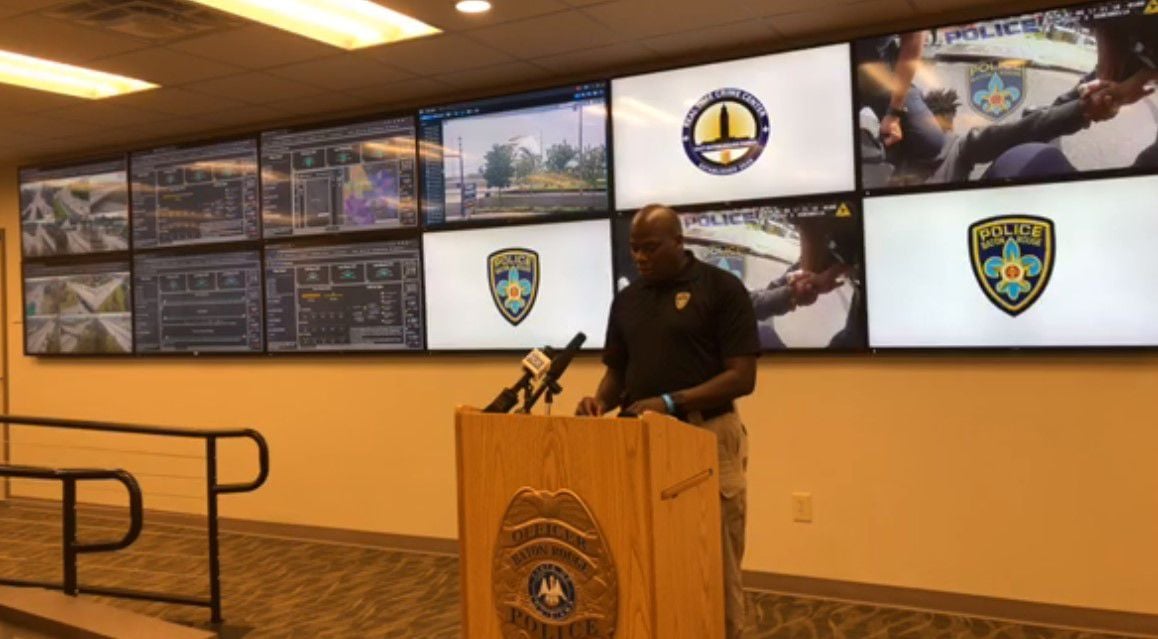 BRPD Chief Murphy Paul talks about an investigation into a video that shows an officer placing a knee on a teen's neck. A screenshot from police video is shown behind him.

Baton Rouge police released this video screenshot of an officer placing a knee on a teenager. Baton Rouge Police Chief Murphy Paul said the knee was placed on his back, which is an approved tactic at the department.

Baton Rouge Police Chief Murphy Paul offers comments before the start of a prayer vigil, Saturday, May 30, 2020 at the Elevate Church in Baton Rouge, La.

BRPD Chief Murphy Paul talks about an investigation into a video that shows an officer placing a knee on a teen's neck. A screenshot from police video is shown behind him.

After video surfaced on social media depicting a scene in Baton Rouge reminiscent of George Floyd's recent death at the hands of Minneapolis law enforcement, the Baton Rouge Police Department quickly released a photograph from the scene that suggests the officer in this case placed his knee on the suspect's back — not on his neck.

Baton Rouge Police Chief Murphy Paul said Monday afternoon the agency will release complete video of the incident, likely within the next 24 hours. He said two officers have been placed on administrative leave pending the results of an internal investigation.

Paul held a press conference to address the case following an announcement from the mayor Sunday night that the department was conducting an investigation. She called the video "very concerning."

Mayor-President Sharon Weston Broome did not mention Floyd's death in her statement, but she was commenting on a Facebook post from local activist Gary Chambers Jr., who posted the video with the following message: "A cop doing this after George Floyd knows exactly what they are doing."

The video clearly shows the teenager lying face down in the street while the officer restrains him with a knee. The suspect later stands up and walks away with police after being placed in handcuffs.

Similar restraint tactics have been condemned since Floyd died after a Minneapolis police officer kneeled on his neck for about eight minutes while the dying man pleaded for air.

Baton Rouge police said Monday the restraint used in this case is not the same and does not violate department policy. Paul said the photograph he released indicates the officer's knee was on the suspect's upper back, which is a technique Baton Rouge officers are trained to use for restraint purposes under some circumstances.

"A knee on a back is used as a control method," Sgt. Myron Daniels said at the news conference, noting that investigators don't believe the suspect's breathing was restricted at all. "But the neck is off-limits."

Police have released few details about the exact circumstances leading up to the incident because the suspect in question is a juvenile, but a department spokesman confirmed it all started with an apparent seatbelt violation.

The juvenile was a passenger in the car whose driver refused to pull over when police attempted a traffic stop, police spokesman Sgt. L'Jean McKneely Jr. said. That led to a police chase that lasted about 50 minutes as the driver disobeyed stop signs and ran red lights, McKneely said. This took place last Monday, July 6.

Other videos of the incident, also included in public social media posts, help fill in the gaps — showing that when the car finally stops, the teenager gets out the passenger side and kneels down in the street with his hands in the air while several officers surround him with their guns drawn. A group of onlookers starts chanting "Don't shoot."

It isn't clear what happened between that moment and when he ended up face down beneath the officer's knee.

Meanwhile the teen's mother, Tenesha Cannon, said she was on the phone with her son during the final minutes of the chase. She said he called her terrified about what would happen to him with the recent events in Minneapolis at the forefront of his mind, knowing he's a young black male and therefore statistically more likely to become the target of police brutality.

"He was afraid. We were crying," she said. "I didn't know if it would be the last time I heard his voice. I didn't know what the police would do, so I just told him to stop the car and submit."

Paul said the teen was injured but didn't disclose the extent of his injuries. Cannon said her son is now wearing a neck brace and has an appointment with a neurosurgeon next week to see if he'll need surgery.

The driver, who's an adult, was booked into jail on the following counts: aggravated flight from an officer, aggravated criminal damage to property, drug possession, seatbelt violation and contributing to the delinquency of a juvenile. Police identified him as Kimani Smith, 22. Cannon said Smith is her son's cousin.

Police have not released the names of the two officers on leave and under investigation. No discipline decision has been made and the department has 60 days to complete its internal investigation.

The teenager's family and their attorneys spoke with the media following a meeting with BRPD leaders that lasted over an hour Monday evening. They commended the department for being as transparent as possible and said they're awaiting the results of the internal investigation.

"But we do have questions," said Baton Rouge attorney Ron Haley, who's representing the family. "This was a young man in an absolute submissive position — on his knees with his hands up. … Yet he was handled as if he was a threat."

Haley said that if the department concludes the incident didn't violate policy, then that likely indicates the policies need to change, especially during this moment of "reimagining policing in this country" when law enforcement agencies nationwide are facing heightened scrutiny and being held to higher standards than in the past.

Throughout their response to the incident, the mayor and police chief both emphasized their commitment to transparency. It's an ideal they've mentioned frequently over the past few years since the 2016 officer shooting of Alton Sterling prompted Baton Rouge leaders to engage in their own public reckoning with race and policing.

Paul was hired the following year and later fired the officer responsible for Sterling's death. He alluded to that decision Monday, saying his track record shows he's not afraid to hold his subordinates accountable and do what's needed to change the culture of policing in Baton Rouge. He also apologized on behalf of his entire department.

He said releasing the body camera footage is the first step toward full transparency. The department needed a judge's approval to release body camera and dashboard camera of the incident because a minor is involved. That approval was given earlier Monday, allowing the release of the photograph.

Paul also said he met with the teen's family because he wants them to feel included in the investigation process.

"I can tell you they are upset," he said during the press conference. "Emotions are high in America right now. I understand that. People across the country are watching how we handle this incident."

Broome said the video "certainly causes concern" but suggested that viewing a more complete account of what happened would be essential to determining how the case is resolved.

"As I understand it, there is lengthy video of the entire incident. I have not seen that," she said. "It's important to see the entire video. Then we can assess what happened and where we're going from there."